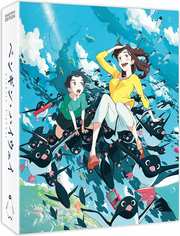 We love penguins. They’re all so cute and adorable, with their little waddles, and their neat little tuxedos. It wasn’t always thus. Batman’s lamest villain was the Penguin, while ‘penguins’ were a derogatory term for nuns in The Blues Brothers. It took the March of the Penguins documentary to rehabilitate the creatures, and thereafter we were regaled with animations like Happy Feet, and films like Mr Popper’s Penguins. The Japanese cottoned on to the cuteness of the penguin long before we did in the West. Antarctica may have been destroyed in the second impact, but one of the more memorable characters in Neon Genesis Evangelion was a penguin. Besides, nothing adds more to the cuteness of a penguin than the Japanese pronunciation of the word ‘penguin’. All of that aimless preamble fills space before I can get to the review of the latest feature film to be released by All the Anime, Penguin Highway.

Antarctica is the natural habitat of the penguin, but suddenly the creatures are appearing en masse in a Japanese suburb. That’s just the kind of mystery that a young boy named Aoyama thrives upon. He wants to be a scientist, he knows he’s smart, and he believes that he’s destined for greatness. He’s also in love, with the dental assistant at his local clinic. She’s smart too, and teaches him how to play chess. When Aoyama discovers that she’s somehow related to the appearance of the penguins, they agree to work together to uncover the mystery.

Penguin Highway gets a 2.20:1 widescreen 1080p transfer on the Blu-ray. The image is just great. It’s clear and sharp, with bright, vivid colours and no signs of compression, aliasing or banding to my eyes. The animation is smooth, and all in all it’s a splendid conversion. The character designs are a little Ghibli-esque, especially in the way they emote, while the world is rich, detailed and feels very lived in. CG is used in an invisible way, never feeling obvious or standing out from the 2D animation.

You have the choice between DTS-HD MA 5.1 Surround English with the choice between an HOH subtitle track, and the DTS-HD MA 5.1 Surround Japanese with a translated subtitle track. You can also have the dub with no subtitles, but I assume that the player forces a signs track with that selection (I had a quick look at the DVD, and that has optional English and Japanese, with dubs, subs and signs). The Blu-ray’s audio options are locked during playback. I went with the Japanese and was happy enough with that, the action comes across well, and the film immerses you in the action. I had a quick listen to the dub, and it seems they cast age-appropriate for most of the child characters. It sounds a little Peanuts-ish at times.

These are the Shout Factory discs localised for the UK region. I got the BD and DVD check discs to look at, and can’t comment on the packaging or physical extras with the release. The content is repeated across both discs, with the DVD presenting a progressive NTSC transfer.

The Blu-ray boots to a static menu, and you get multi-angle credits for the end scroll.

The Director Hiroyashu Ishida Interview lasts 21:05.
The Author Tomohiko Morimi Interview lasts 11:51.
The Ishida Past Works Promo Video lasts 2:17, and will have you looking for more of his films released in the West (I couldn’t find any).
Finally there is the Good Night Promo Video, which lasts 2:08.

Penguin Highway is adorable, and it’s not just for the penguins. The penguins aren’t even characters in this film; they are symptoms, clues to the film’s over-arching mystery. Penguin Highway is what you’d probably get if you made X-Files for a family audience. Aoyama makes for an unlikely grade-school Mulder, although given his devotion to science, he’s more Scully than Mulder. He’s an atypical school boy though, devoted to the scientific method, aware of his brilliance, yet able to recognise it in others, including the class chess-champ, a girl named Hamamoto. But he usually has his friend Uchida assisting on his investigations. His scientist instincts are triggered when penguins suddenly appear in the town, and just as suddenly vanish.

Aoyama’s a regular boy in one respect. He has a very unscientific obsession with breasts, and he has a crush on the dental assistant. He’s friends with her; she teaches him how to play chess, although she has a decidedly odd outlook on life, which fascinates him even more. When he realises that she’s somehow linked to the penguins, they decide to work together to investigate, but it only begins to reveal just how odd she is. At the same time, it turns out that Hamamoto is just as scientifically minded as Aoyama, and she invited him to help uncover another mystery that she’s discovered in a nearby forest clearing.

Penguin Highway is a delightful little film, wonderfully animated and a joy to watch. It combines a rather sci-fi mystery with a tale of first love, and it makes for an entertaining couple of hours. Aoyama has his crush on the dental assistant, but it quickly becomes clear that Hamamoto is sweet on Aoyama. At least that is clear to Suzuki, the class bully, who gives extra attention to Aoyama as a result, causing no few roadblocks in the investigations of the penguins and the mystery in the forest.

Penguin Highway takes its time to get going, as it establishes its characters and the mysteries at its core, but it has a good pace to it, a gentle sense of humour, and a lot of heart. It’s easy to get invested in the characters, and maybe feel a little nostalgic too for childhood days. It can get a little esoteric at times, and I wonder how younger viewers will find its wilder flights of fancy, but for us older kids, Penguin Highway is a treat.