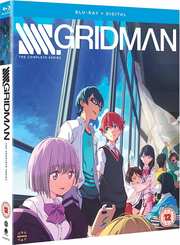 Review for SSSS.GRIDMAN: The Complete Series

I never thought I’d see something along the lines of this premise again. I’m showing my age here, but when I was a kid, I tuned in regularly (and briefly) to a one-off US superhero action show called Automan. It didn’t last, cancelled after just 13 episodes, but it was radical at the time, reversing the TRON premise. A computer programmer created a hero, the eponymous Automan, who could manifest in the real world to fight crime and battle evil, but bringing the rules of his digital realm to reality. Let’s face it, it was a dumb show that was quite deservedly cancelled, like many concept shows of the time (anyone remember Manimal?). The problem was that budgets, production values, and the nature of TV writing of the period just couldn’t do the concept justice. Writing is a lot smarter these days, with TV rivalling, and even exceeding film when it comes to quality, and you don’t have to worry so much when it comes to production value and budget when you animate the whole thing. Even so, it’s still surprising that it’s taken close to 40 years for me to see something like Automan again. Enter ssss.Gridman! 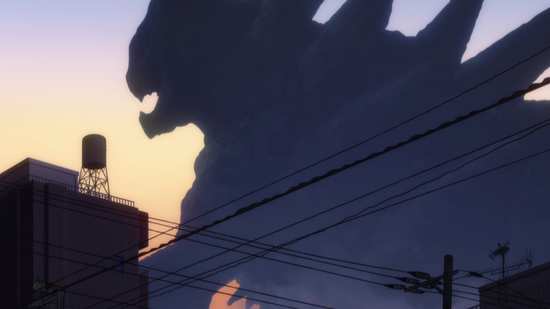 Yuta Hibiki wakes up on a sofa with no memory of who he is. Fortunately Rikka, the girl whose sofa it is goes to same school as him, which gives him a starting point. But that’s the least weird thing that happens to him. There’s a voice from an old computer in Rikka’s family junk shop that calls to him. An image appears on the screen of a robot, that only he can see. Gridman tells him that calamity is coming, and only Yuta can stop it. Then there is the Kaiju, the giant lizard frozen like stone that Yuta sees on the way to the hospital. 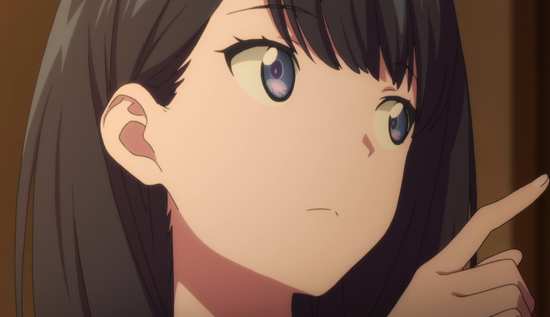 The next day, his memory is still fragmented, but he’s figured out who his best friend at school is, and he takes Utsumi to Rikka’s shop to show him the weird computer. Then the Kaiju comes to life, starts attacking the city, destroying the school in the process. The computer sucks Yuta in, and Gridman appears, a giant robot that fights the Kaiju, and this time Rikka and Utsumi see it. But they might still be crazy, for the next day, the school has been restored, without a scratch. 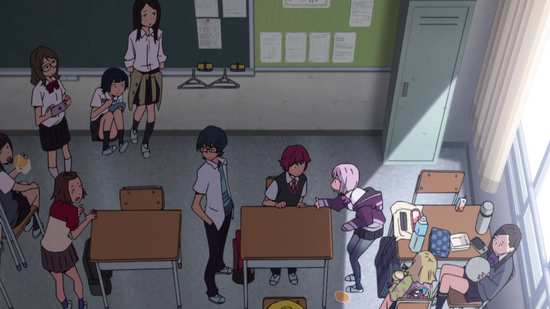 The mystery of ssss.Gridman unfolds across twelve episodes from Manga Entertainment across 2 Blu-ray discs. It’s also available on DVD, and on Collector’s Edition BD/DVD Combo with some sweet physical extras. 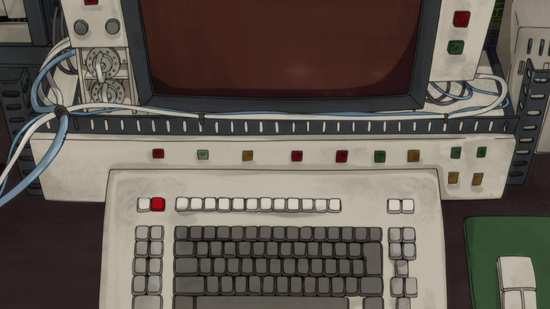 ssss.Gridman gets a 1.78:1 widescreen 1080p transfer on these two Blu-ray discs. The image is clear and sharp, and the colours are rich and consistent. Gridman’s animation is really quite impressive, although it does follow some of its genre tropes (odd moments of repeated animation sequences). The character designs are typical anime, but the action sequences are really well choreographed and executed, with an impressive degree of impact. There’s a really inventive level of design to the mecha and the kaiju, and the anime manages to deliver a solid sense of scale. The transfer is up to Funimation’s usual standards, maybe a little better, as I didn’t notice significant digital banding, and naturally there is no sign of compression or aliasing. 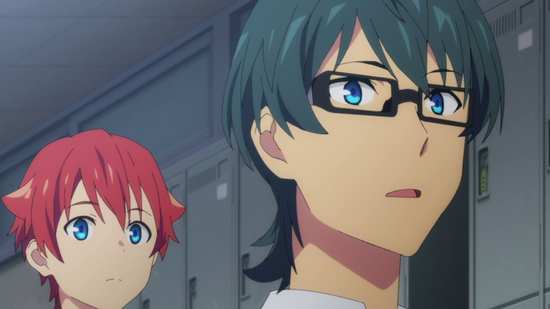 You have the choice between Dolby TrueHD 5.1 Surround English and 2.0 Stereo Japanese, with subtitles and signs and rarely for a Funimation release, they are unlocked throughout. I gave the dub a quick try but wasn’t enthused by it, instead sticking as usual to the original language track. The show comes across well even with the stereo, the action really done justice by the sound mix, while keeping the dialogue clear, and all supported by an appropriate soundtrack. I quite like the theme songs to the show as well, even if the opening did remind me of Tiger & Bunny. The subtitles are accurately timed and are free of typos. 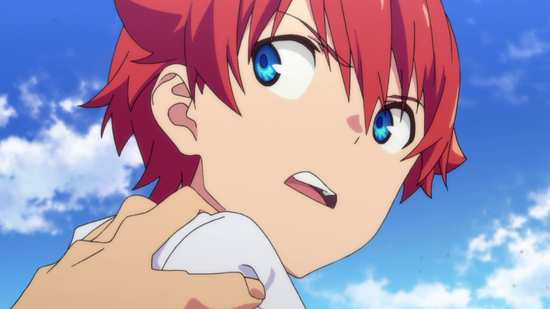 Disc 2 has just one extra, ssss.Gridman: Behind the Gridman Alliance, which lasts 27:18. In it, ADR Director Clifford Chapin, Jill Harris (Rikka), Lindsay Seidel (Akane), and Brandon McGinnis talk about the series. 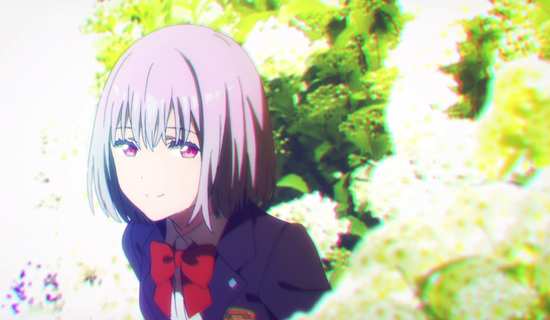 It took its sweet time but ssss.Gridman finally grew on me. The show is really quite deceptive with how it initially presents, but by the end of the series I was in two minds as to whether it was brilliant, or merely just great. The similarities to Automan are just superficial though. The computer generated hero is just a Maguffin here, not really too meaningful when it comes to the story. 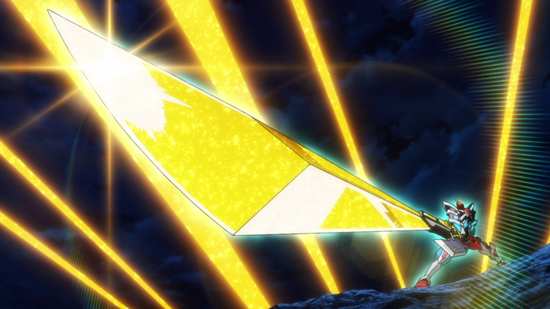 ssss.Gridman is more a sentai show, one of those genre pieces where a group of heroes come together to battle evil. Normally you see them in different colour uniforms, yellow, red, blue, pink and green, but not always. This is one of those sentai shows where the heroes transform (via the computer) into giant robots to do battle, and they can combine to create an ultimate giant robot to battle the fiercest and most dangerous of foes. 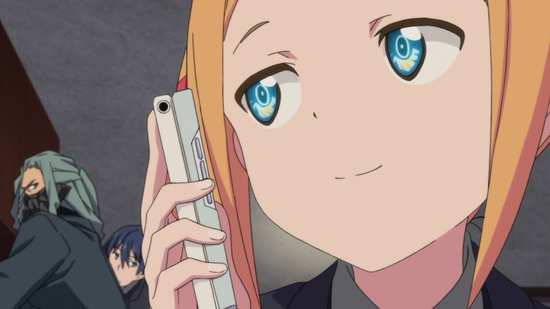 At the start of the show, the protagonist Yuta Hibiki presents with amnesia, and has to rely on his school friends Rikka and Utsumi to try and recall his place in the world. It’s an odd world too, as he can see giant frozen Godzilla-like monsters on the horizon, which no one else can see. But then a real life monster appears, and Yuta gets turned into Gridman and he has to fight the monster. Thereafter his friends start seeing the monsters as well, and allies arrive to help him fight. Also, after every battle, the city ‘resets’ during the night, everyone’s memories but theirs are erased, and it seems history is re-written so that any casualties are now remembered as long dead. 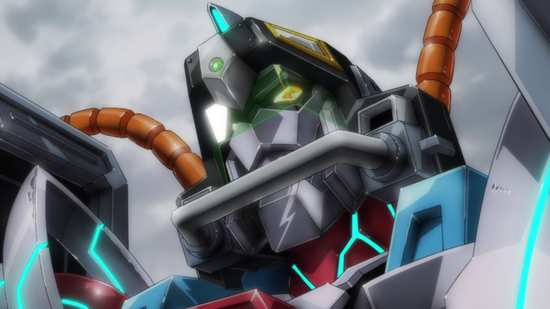 At the start it seems like just another giant robot versus monster show, even to the degree that it’s using recycled animation at some points. It quickly becomes clear that someone known to the friends is behind the appearance of the kaiju. Akane Shinjo is a girl in their class at school, who sits next to Yuta, and is friends with Rikka. Just as Yuta contacts the avatar of Gridman on the junk computer in Rikka’s family shop, Akane is in contact with a shadow figure named Alexis Kerib, who helps give her kaiju life. It isn’t long before Akane has a minion as well, an ill-mannered boy named Anti whose sole purpose in life is to destroy Gridman. 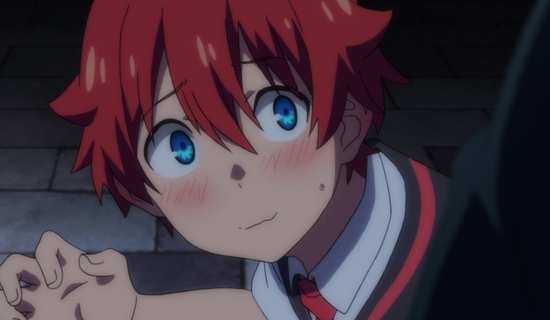 It feels so pedestrian and clichéd at the start of the series, a battle against the monster of the week, where the villain always gets away, twirling a moustache, swearing to get even the next time. And as per the usual tropes, heroes and villains are friendly at school the next day, both unaware of the other’s true nature. I have to admit that when I started watching Gridman, it was a chore to get through each new episode. But the key to the show is the mystery. 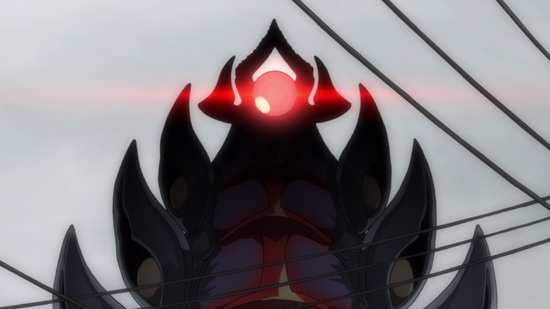 It begins with Yuta’s amnesia, the fact that not everyone can see the kaiju, and that memories are erased, and the city gets rebuilt after each battle, with no one the wiser. The mysteries get more and more convoluted and become more central to the story as the series progresses, and that’s what captured my attention. Also, the character motivation start becoming more important to the story than the spectacle, and that makes it a lot easier to invest in what is going on. There comes a point in the series where what is happening is so profound, so existential, that you begin to question the very nature of this reality that we are presented with, and more importantly, so do the characters. In this respect, I was reminded of the movie Dark City, and The Big O anime series, and those are good things to be reminded of. I also have to say that I love the ending of Gridman, and I can’t think of a conclusion more appropriate. 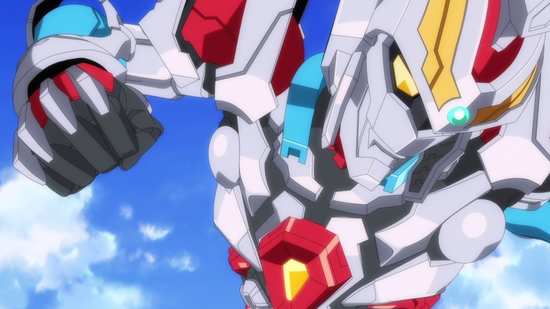 ssss.Gridman has strong writing, great characters, and animation that live up to the scope of its thought provoking and epic storyline. The only problem is that it takes long enough to get going to let the more impatient viewers to start to lose interest. I know that if I wasn’t reviewing it, and instead watching it on a streaming service, I probably would have moved on before it got interesting, and that would have been a shame. Give this show a chance and it will reward you.