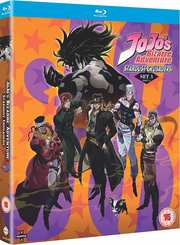 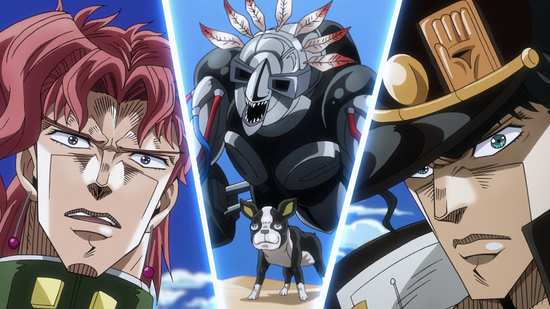 I’m guessing if you clicked on this review you have already seen and enjoyed Sets 1 and 2 of this incendiary series. If not, you can read my reviews to Set 1 here and Set 2 here. Whilst Set 3 is an unarguably thrill a minute, it comprises the second part of an epic story arc (Stardust Crusaders) and is not recommended unless you have watched the first half. 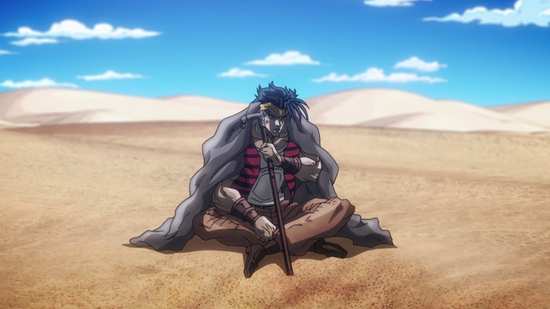 As a slight re-cap, the first set was set in the 1800s initially, before moving forward to 1938. The second set (the first half of Stardust Crusaders – keep up!) starts in the late 1980s and sees Joseph Joestar travelling to Japan where his Grandson is in a police cell and won’t come out, even when encouraged to do so. Jotaro Kujo believes he has been cursed but it transpires that it’s actually a ‘stand’, a shadowy manifestation of Jotaro’s own spirit, so called as it literally ‘stands’ to the left or right of its subject. 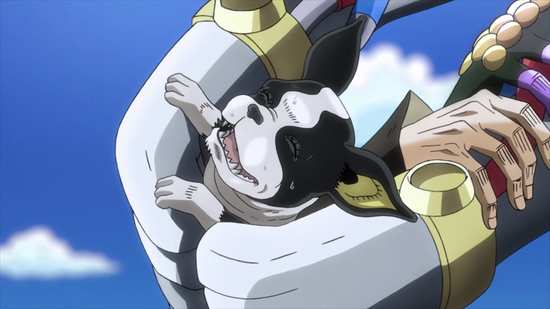 This particular ‘stand’ is names ‘Star Platinum’ and, depite only being to operate within very close proximity to its ‘master’, is immensely powerful. When Jotaro eventually leaves his cell he is attacked by the goons of the Joestar clan’s greatest foe, Dio Brando, known simply as DIO who has taken over the body of the late Jonathan Joestar, the original ‘JoJo’ of the first set. 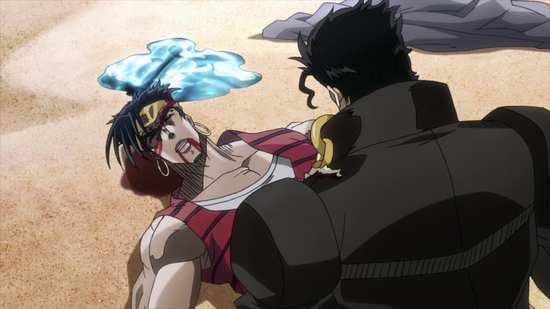 Jotaro’s mother (and Joseph’s daughter) Holly, falls ruinously ill; it transpires due to an enemy stand. Jotaro discovers that the only way to reid of her of the illness is to kill DIO. Not only that, if he doesn’t do that within 50 days, his mum isn’t going to make it. 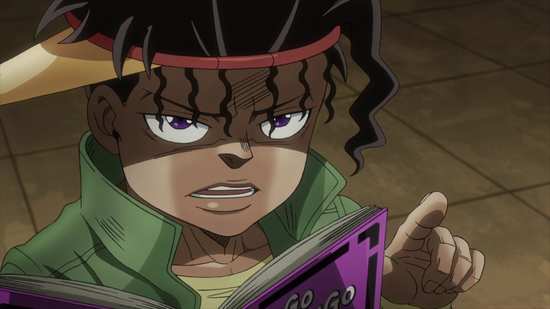 With time ticking, he sets off to Egypt, battling various of DIO’s ‘Stands’ along the way. OK – that’s a gross over-simplification of what was actually a fairly nuanced narrative but, dammit, it’s time to get into Set 3.

In Set 3, Jotaro and his crew, having arrived in Egypt, now set about finding and destroying the evil DIO. But no crew is an island. The Speedwagon Foundation come to their aid with food and supplies and a willingness to tag along to help. But they are a raggedy and ill-disciplined bunch, with a grouchy dog called Iggy who has his own ‘stand’ which forms out of sand. Convenient given their locale. 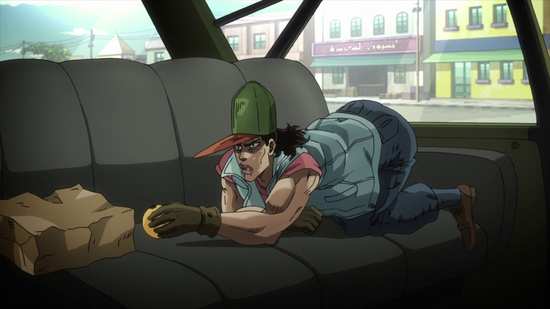 Playing out like a cross between RPG, ‘Lord of the Rings’, and the search for Bin Laden (yes – it had to be said), this band of fearless fighters inch their way towards Cairo (Mordor anyone?), tackling the evil DIOs increasingly powerful henchmen along the way. It’s wildly imaginative with every new ‘Stand’ revealing some new power (like a shadow which, when stepped on, makes the visitor years younger – who dreams up this stuff? Brilliant!). 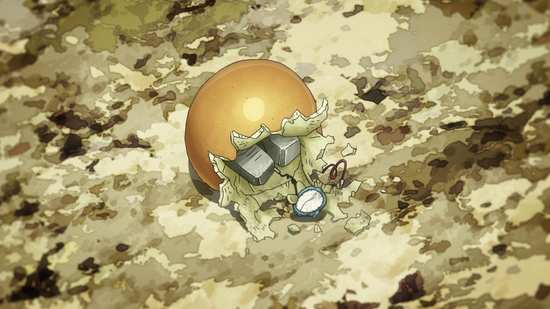 But where is DIO hiding? And just how powerful is his ‘Stand’, rumoured to be the most powerful in the world (and named ‘The World’ just to hammer the point home). 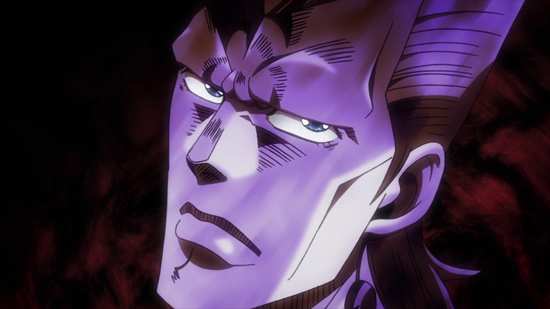 The great thing about the whole series, and not just Set 3 (though it continues to maintain the momentum very well) is that its episodic fight sequences fill the series with tons of action. But there is always some respite as Jotaro’s group rest from one battle and journey ever onwards, providing just the right amount of contrast to prevent this becoming a wall-to-wall fight fest in the way that ‘Fist of the North Star’ tended to be, for example. It’s a road trip for the most part, always fun to watch and, quite honestly, there is never a dull moment across the whole series. 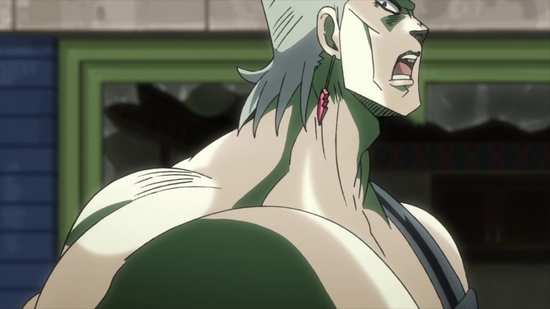 Even the finale, the big battle with DIO which has been almost 50 episodes in lead up, doesn’t over stay its welcome, remaining concise and exciting and rewarding to watch. 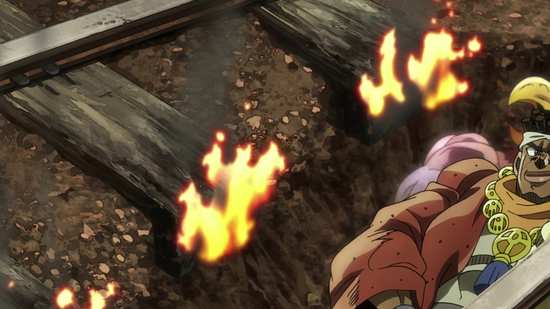 For rock fans, the oblique references abound. Not only was Yes’s classic and mind-bending bass led track ‘Roundabout’ used for the early title sequences, but character names reflect the writer’s love of great music too. Zenyatta and Mondatta (two of DIO’s villainous henchmen with fun superpowers) are clearly named after ‘The Police’ LP of the same name and, from what I hear, started out life as Oingo and Boingo, before New Wave band ‘Oingo Boingo’s management team served a writ. I love this kind of oblique cultural reference in manga – I remember being delighted with a William Burroughs reference in one anime I reviewed but I can’t for the life of me remember what it was now. 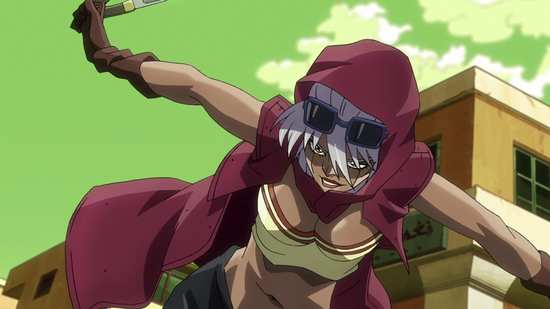 I watched the series in its macho-American dubbed edition but Japanese with subs is an option. There are no extras worth mentioning other than textless opening and closing sequences and a few trailers. 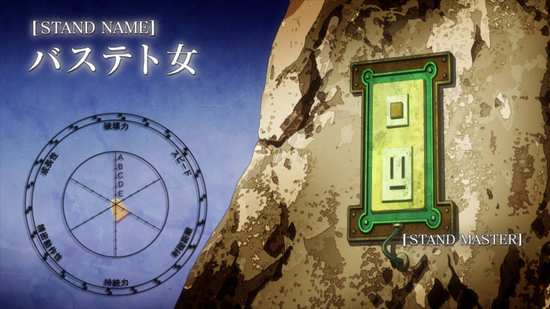 Set 3 of JoJo’s Bizarre Adventures continues the magnificent momentum of the previous sets and concludes an epic arc with as much energy and panache as it started with. It’s easy to see why the long running manga is so popular. I’m very much looking forward to the next epic adventure which, as long as you all run out and buy this, may get a UK release before long.