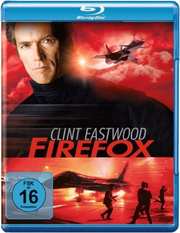 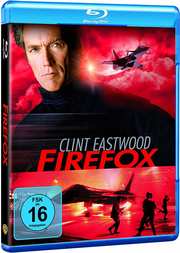 I used to have a moment of cognitive disconnect every time I clicked on my web browser, especially after I had just moved away from Microsoft’s offering. For me, Firefox was the Clint Eastwood movie first, the Craig Thomas novel next, and finally a piece of software. After this much time, the pause for thought isn’t as bad, maybe a microsecond or two, but even now, if you said the word Firefox to me, my first thought would be a Mig-31.

It’s nostalgia that has me seeking out this Blu-ray, as I can freely admit straight off the bat that Firefox isn’t one of Clint Eastwood’s finer efforts; in fact it’s really a bad film, with only the strength of the novel, the Cold War setting, and the cool (for 1982) special effects making it a notable entry, and it would be quite rightly forgotten a few years later, once Tom Clancy’s novels started being adapted into movies, and once Clint Eastwood had made Unforgiven (yes, Eastwood also directed Firefox). That it was one of the earliest films to spin-off a bunch of video games is also worthy of mention, especially the laser disc Atari arcade game featuring film footage. But for a long time, I watched this film regularly, and I suddenly got the urge again. The VHS thing not really my bag, I went looking for a Blu-ray instead, and found a decently priced bargain in Germany.

In the continuing arms race between East and West, intelligence services have discovered that the Soviet Union has stolen a march on the West. In the space of a few years, they’ve developed a fighter plane with a top speed of Mach 6, invisible to radar, and with a thought guided weapon system. It can out-fly and out-fight anything that the West has by a factor of two to one, and if the Soviets can mass produce it, it will change the balance of power forever. There’s no way the West can catch up, not unless they steal one.

The right opportunity is about to present itself during a test flight. All the intelligence services need to do is get the right man into the cockpit at the right time. The right man turns out to be Vietnam veteran Mitchell Gant, a man who is burnt out, and suffering from PTSD. But, his mother was Russian, he speaks the language like a native, and more importantly, he fits the flight suit.

The film gets a 2.40:1 widescreen 1080p transfer on the disc, with the option of DTS-HD MA 5.1 Surround English, DD 2.0 Stereo German, Spanish, French, Italian, and Portuguese, with subtitles in these languages plus Danish, Finnish, Norwegian and Swedish. The image is adequate, certainly good enough for HD in brighter scenes. The detail levels are good, there is a filmic layer of grain, exaggerated during flashback sequences, and as mentioned, for 1982, the effects are really quite good, aside from one obviously rear-projected Red Square moment. For this film John Dykstra figured out how to do arctic flying sequences without matte lines (compare to the Hoth sequences in The Empire Strikes Back). The problem comes in darker scenes, where black crush is prevalent, detail is lost, and it’s hard to make out anything at all (compared to my VHS sourced TV broadcast copy, this was made even more apparent). The audio is fine, the dialogue is clear, and the 5.1 mix does the stereo source justice, giving it a bit more space to breathe, but not doing anything too extravagant with the sound.

You get one disc in a thin BD Amaray eco-case (with bits cut out of the plastic). The disc boots to a static menu.

You’ll find the trailer on the disc, which lasts 2:27 SD.

Of much more interest is the Clint Eastwood – Director featurette, which lasts 29:57 SD. This serves as a profile for the director, as well as a behind the scenes, making of, for the film. It’s really quite interesting to watch, certainly more so than the film on this disc.

I bought the wrong Firefox!

I had a moment of cognitive disconnect once more, as I watched this disc, and quickly realised that this wasn’t the film I remembered. I taped Firefox back in the eighties from a teatime showing on ITV, carefully screening out all of the adverts. I re-watched that until the tape wore out, and then waited until it was broadcast again, this time on a late night BBC showing and I taped it again. I still have that version on disc, and used it to compare with this last night. It quickly became apparent that this Blu-ray was missing key scenes. I had in my eagerness for a bargain bought the International Theatrical Version, which comes in at 125 minutes, some 12 minutes shorter than the original US release. The TV version that I taped, pan and scan though it is, more closely resembles that.

The International Theatrical Version is all about getting Mitchell Gant to the plane, for half an hour of special effects work at the end of the film where most of the action happens in bright, icy tundra monochrome daylight. The rest of the film is set mostly in dark, full of intrigue, espionage and claustrophobic alleyways, as Mitchell Gant sneaks his way around Vienna (standing in for Moscow), encountering shady characters and running and hiding from the secret police. It cuts out a fair bit of character development and enough of the plot to render it ephemeral and forgettable.

Mitchell Gant goes from wreck being recruited, straight to flying into Moscow at the start of the film, and while they forgot to edit out the “3 months training line”, they did completely lose the training montage, which shows Gant getting his mojo back over 3 or 4 minutes of footage. The original insertion into Russia, always barely one step ahead of a crushing tsunami of secret police arrests and interrogations at the behest of the Kontarksy character is neutered, making that investigation feel like an afterthought rather than a driving impetus. Similarly, the character dynamic among the Politburo members dealing with the theft of the Firefox is trimmed down to focus on the flying and action bits, neutering that antagonistic element. Poor Andropov doesn’t even get any lines in this version. Instead we’re left with Gant narrating his flight into the black box recorder, which I’ll freely admit comprise the dullest moments in the film.

Firefox is not the best Cold War tech thriller in the world. If you want to see this story done right, get yourself a copy of The Hunt For Red October, which rather than a singular protagonist at least offers dramatic conflict between its characters on both sides. It is a far, far better movie than Firefox. But that original version of Firefox is better than what we have here as the characters are developed much better, the narrative arcs are more pronounced, and that helps you invest in the story long enough to actually care about Mitchell Gant stealing the Firefox. When it comes to this International Version, D.A.R.Y.L. stealing the SR-71A Blackbird is more exciting.

As you might have guessed, I am now compelled to correct my error, and have placed an order for the US version of Firefox, which is only available as a double pack with Heartbreak Ridge (I was trying to avoid the multi-pack mistake I make so often, and wound up making this different mistake). I’ll get around to reviewing Firefox again in due course, but in the interim, make sure you avoid this International version of the film.