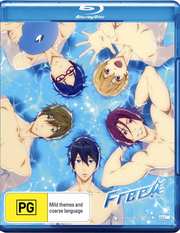 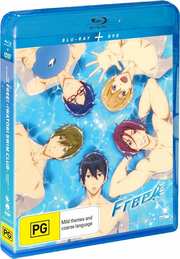 Gaps annoy me. It’s another expression of my OCD when it comes to collecting home video. I just can’t countenance a gap in my collection. I might like the first film in a trilogy, and that’s all I need. But if I like the first and third films, I will have to buy the second, no matter how bad it is, and even if there is no narrative connection between the films. 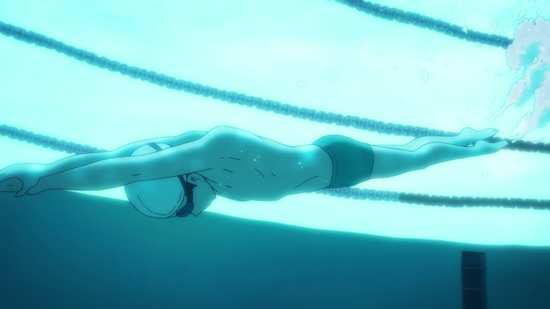 There’s nothing bad about the Free! franchise. Studio Kyoto Animation may have established a reputation animating cute girls doing cute things, but they really hit the jackpot when they gender-switched the concept. K-On! may have got two series and a movie, Haruhi Suzumiya got two series, short form spin-offs and a movie, and they have had a similar success with Love, Chunibyo and Other Delusions, and Sound Euphonium. But to date, Free has given us three seasons and four feature films. That’s a level beyond the rest of Kyo-Ani’s hit shows. Only one TV series of Free has made it to the UK thanks to Anime Limited, the second one, Eternal Summer. There was a bit of confusion when the first season was licensed, switching between Crunchyroll and Funimation in the US, taking its time to get a dub, and it is yet to be released in the UK. Now I enjoy Free, but it’s not one of my must have titles, and I’m not compelled to seek out the third season or the film spin-offs. But having that second season in my collection means I can’t rest until I have the first season on the shelf next to it. Thanks to an import from Australia, here it is, the first season, Free! Iwatobi Swim Club. 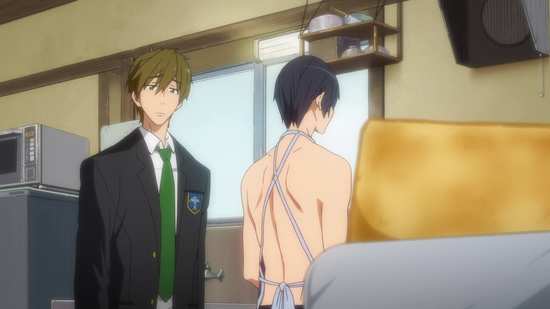 When they were kids, Haruka Nanase, Rin Matsuoka, Makoto Tachibana, and Nagisa Hazuki competed together in swimming. Rin already had an ambition to be an Olympic Swimmer, but all Haruka wants to do is to swim “Free”, freestyle, not as bothered about the competition other than as a means to an end. Their high point came when they won the medley relay, and Rin left on a high to go to a swimming school in Australia. 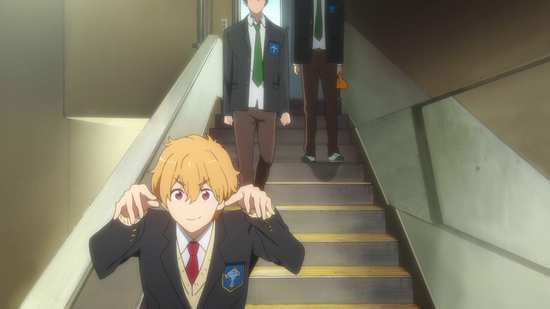 Now, high school is starting and all has changed. Iwatobi High School doesn’t have a swimming club, while the outdoor pool has been allowed to deteriorate in neglect. The local swimming pool where they won their victory is being demolished, and Haruka has settled for image training in his bathtub. When Rin returns, and starts at a prestigious rival school named Samezuka, and there is a frosty reunion with Haruka that culminates in a race that satisfies no one, Makoto and Nagisa become determined to start a swimming club at their high school, and get Haruka involved again. The thing is that even with the club, they need a fourth member to field a proper medley team. Nagisa’s eye falls on track and field athlete Rei Ryugazaki. The only problem is that Rei doesn’t know how to swim... 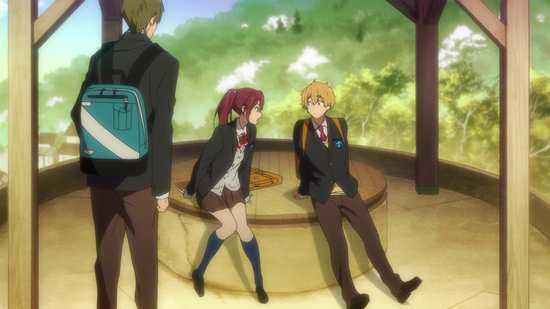 12 episodes of Free! Iwatobi Swim Club are presented across two Blu-rays from Madman Entertainment. This collection also has the show on two DVD discs.

Disc 1
1. Reunion at the Starting Block!
2. Memories in the Distance!
3. Theoretical Dolphin Kick!
4. Captive Butterfly!
5. Trial in Open Water!
6. Shocking No Breathing!
7. One Style Final!
8. Revenge in the Medley!
9. Hesitant Loosen Up! 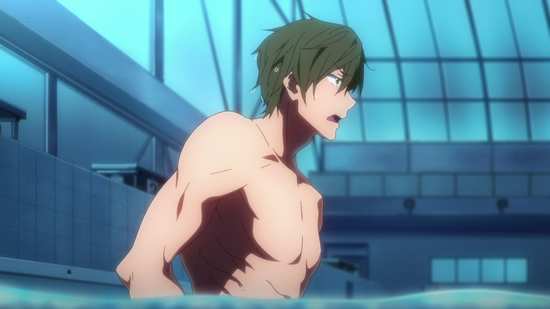 Free! Iwatobi Swim Club comes with a 1.78:1 widescreen 1080p transfer on these Blu-ray discs, and at first glance it’s a nice transfer, clear and sharp throughout, with great detail, strong consistent colours, all working together to bring out KyoAni’s work to good effect. They’re masters of character animation, creating lush, and vivid worlds in shows like Haruhi Suzumiya, and K-On!, and they don’t deserve to be short-changed by a lacklustre transfer. The animators have had to take crash-courses in male anatomy to satisfy Gou’s fascination with muscles, and lean, well-toned males abound, with nary an ounce of stray fat on them. Compared to the sequel, the original series is actually better when it comes to digital banding; I hardly noticed it at all. I believe the original series was released by Funimation after the sequel, following all the Crunchyroll shenanigans. 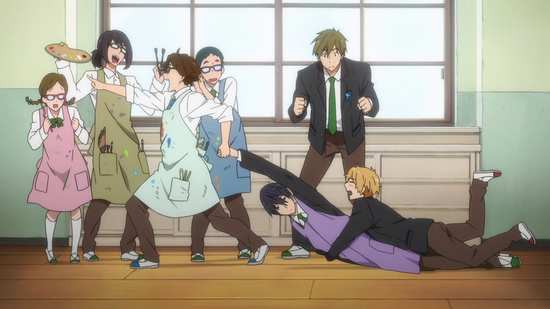 You have the choice between Dolby TrueHD 5.1 Surround English, and 2.0 Stereo Japanese, with translated subtitles and signs, locked during playback. My preference as always was for the original language track, and I was perfectly satisfied with the voice actor performances. The dialogue is clear throughout, the action sequences work well with the stereo, and the music suits the show, especially the boy band theme songs. The subtitles are accurately timed and free of typos. 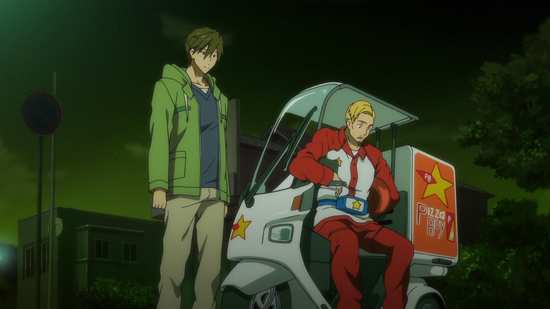 You get 4 discs in a BD Amaray, two either side of a centrally hinged panel, and two on each inner face of the case. The inner sleeve has an episode listing.

Disc 1 autoplays a trailer for My Hero Academia before booting to a static menu.

Disc 2 autoplays a trailer for Prince of Stride Alternative.

There are three short OVAs on this disc. 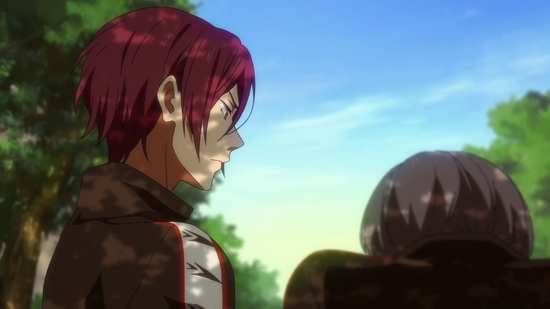 These offer more snippets of fun with the characters.

You get the textless credits, with locked subtitles marring the animation. 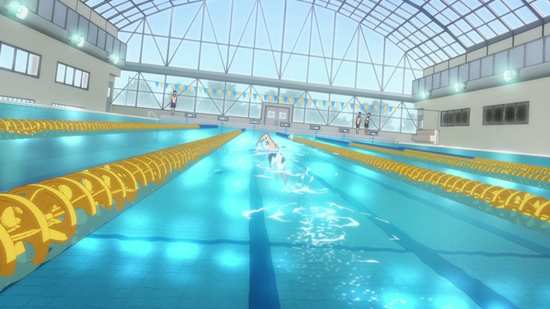 I just had the oddest experience watching this first series of Free! again. Back when I reviewed the second series, Free! Eternal Summer, all the way through the review I expressed with forthright conviction that the original series was better. That was back in 2016. Four years later, I work my way through the original series, and all the while as it plays out, I feel certain that the second series was a better experience. It’s odd the tricks that memory play on you. Having re-read that review and given it a bit of thought, I would say that this show, Free! Iwatobi Swim Club is the better show, simply because it introduces the characters and the premise, and develops them in a satisfying way, while the second season can feel a bit of a rehash at times. 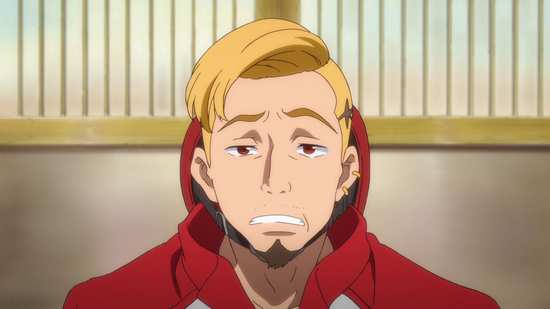 One thing that I do feel is that the aspect of the second series that most turned me off from it is even stronger in the first series, the idea of Kyoto Animation simply gender switching the characters in one of their ‘cute girls doing cute things’ shows, and making it about swimming. This first series introduces the characters of Haruka, Makoto, Rin, Nagisa, and Rei, and while the second series allowed for some development in the characters, here you just get the stock stereotypes, but with pecs instead of breasts. Haru is the typical grey haired girl, Makoto fits the caring big sister stereoptype, Nagisa is the enthusiastic idiot savant, Rei is overly self conscious, and Rin is totally tsundere. 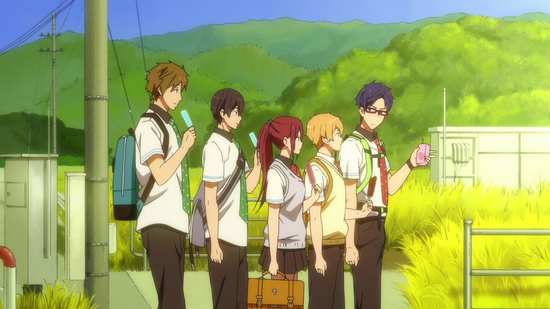 It is quite obvious watching this show that the characters have been gender flipped, or the writers wrote the show for girl characters and didn’t bother with minutiae like gender differences and psychology. These characters behave like the cute girls that they are obviously based on, talking about their feelings, getting emotionally affected and demonstrative about the slightest things, and girly-squeeing whenever anything vaguely exciting happens. As I said before, it all works for the target audience, and I am not a member of that demographic, 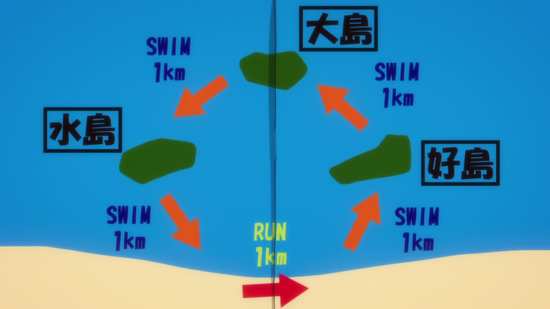 So why is this first series better than its sequel? Well, for me it is that sense of novelty about the story, but also it does an effective job in introducing the characters, and developing an emotive story arc that works well through the 12 episodes. When the series begins, the characters are on a bit of a downer, having obviously experienced something disheartening in the past. Haru is still in love with swimming, but doesn’t swim competitively. The local swimming pool has been demolished, and the one at the high school is run down and disused, and there is no swim club. Haru, Makoto and Nagisa are friends attending that school, but they don’t know that their former medley teammate Rin has returned from Australia and is attending another school, and his dreams of being an Olympian are in tatters following his sojourn abroad. 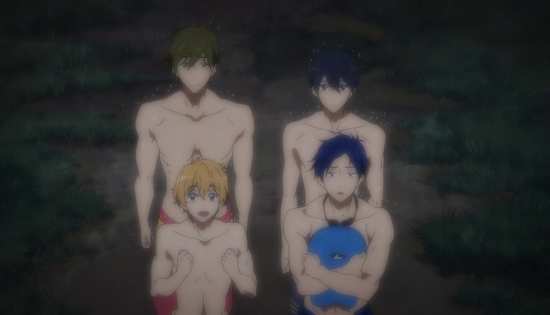 A chance reunion leads to an impromptu swim race, and the result compels both Rin and Haru to take up swimming again, with Rin joining his school swim team, while Makoto and Nagisa convince Haru to start a swimming club at their school, pulling in track and field athlete Rei in as another member. Rivalry and competitiveness between Rin and Haru resumes, but this time there is a harsher, negative edge to it that grows through the series. The characters have to work out their issues and face their past before they can start to heal, and through all the triumphs and setbacks that they face through the series, it’s the final episode that finally allows them to do that. 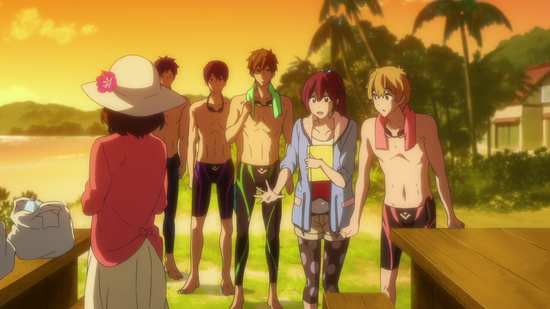 In terms of character and story, Free! Iwatobi Swim Club manages to do it all in these twelve episodes, and as so often happens, subsequent season and spin offs really only serve to cater for the fan fervour for the franchise without adding much that is new. Kyoto Animation excel with this genre of show, and the imagination and quality that they bring to the animation is peerless. Water is notoriously hard to animate, and what they accomplish with Free! is mesmerising. 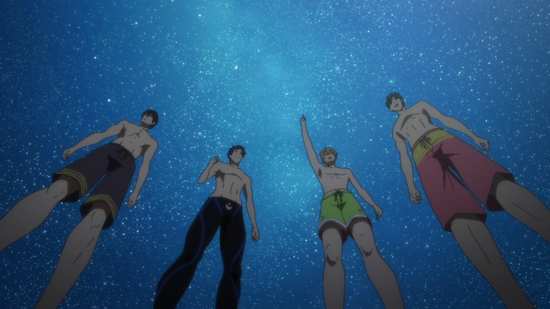 Free! Iwatobi Swim Club is an entertaining show, which in this collection gets a better presentation than its sequel did. But I can’t get away from the fact that this is a show where cute girls do cute things in muscular boys’ bodies. And I never thought I’d type that sentence.