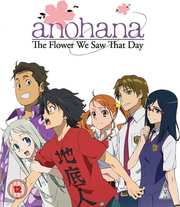 Anohana - The Flower We Saw That Day (Blu-ray Details)

Review for Anohana - The Flower We Saw That Day

Importing anime can be a double edged sword. Sure, you can get tons of shows that just aren’t available in the UK, and should you invest in a multi-region player, then a whole world of anime opens up, previously cut off from you. On occasion it becomes necessary to get a better version than the UK release, but life is certainly less complicated if you stick to the domestic market, and it’s not as if there is a shortage of anime in the UK. But sometimes importing can be a gamble. You might invest in a show, comfortable in the knowledge that it probably will never come to this country, given a niche subject matter, or a rather niche target audience. And then it gets released in the UK, and in a better version than the one you imported. 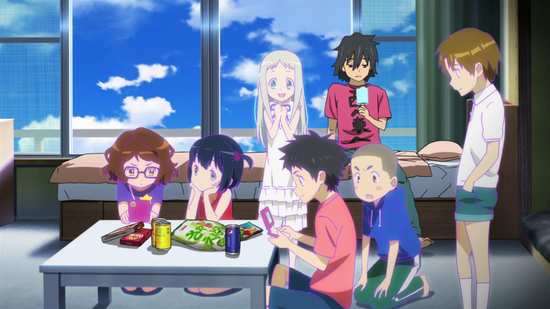 The word of mouth around Anohana: The Flower We Saw That Day was unfailingly positive, a bittersweet, tragicomic coming of age drama that got universal praise. It was originally released as subtitle only in the US by NISA on region locked discs, and given the genre, (no giant robots, no fan service) I felt safe in the knowledge that it would not come to the UK. So I went and imported the Region B release from Australia. And now it’s got a UK release from MVM. Not only that, in the interim, the licence got picked up in the US by Aniplex US after NISA dropped it, and Aniplex went back and gave the show a dub, and that’s the version that we get in the UK, a little more for your buck than the Australian release that I imported. Some gambles you win, some you lose. Thankfully there are review discs, and it would be rude of me not to watch the dub this time around... 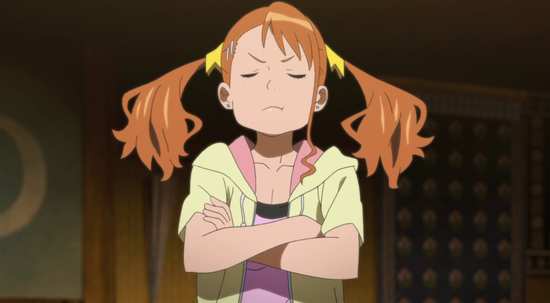 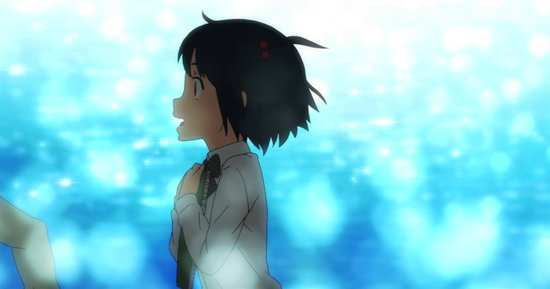 Eleven episodes of Anohana are presented across 2 Blu-rays from MVM. 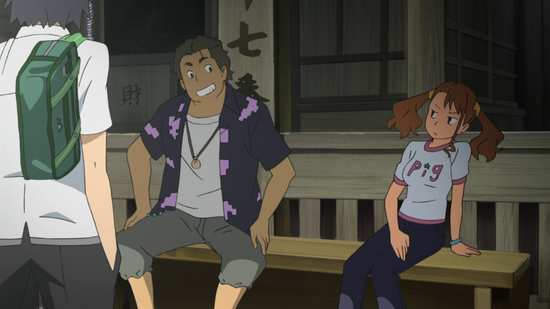 Anohana gets a 1.78:1 widescreen 1080p transfer on these discs. The image is clear and sharp throughout, with strong, consistent colours. Studio A1 do the honours, and they’ve created a show that quite rightly focuses on character nuance and detail. The animation is smooth and fluid, while the backgrounds and settings are detailed and lush. The only minor niggle which a nit-picker might draw is that the character designs are a little generic anime style for the quality of the story, if likeable and well thought out. You might have hoped for something a little more KyoAni level. But it’s an exceedingly small nit to pick. 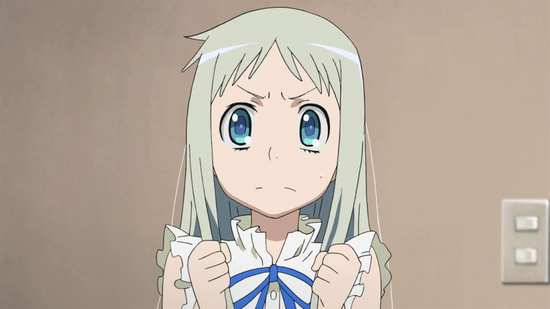 Aniplex US were lavish with their disc real estate, offering dual layer Blu-rays for their Anohana release. MVM’s discs are frugal, single layer affairs, but 6 and 5 episodes across two single layer Blu-rays isn’t to be sniffed at. I might have noticed some banding in a couple of scenes, and maybe a bit of posterisation in non-uniform colour shading, but I had to get close up to the TV to notice it. I doubt you’ll be lamenting the loss of file-size and bit count unless you watch it on a large enough television screen. I certainly didn’t see much difference if any comparing the show to the Australian subtitle only release from Hanabee, and that was a dual-single arrangement with the episodes each taking up some 1.5 GB more space on average. 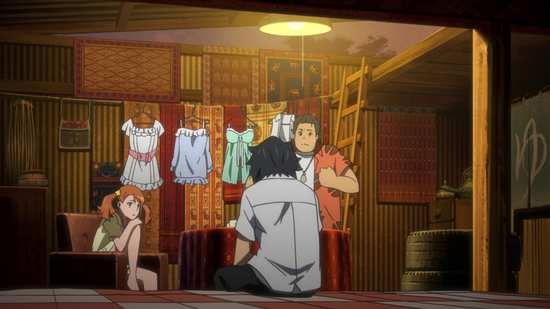 You have the choice between PCM 2.0 Stereo English and Japanese with optional translated subtitles and a signs only track. The show also gets some beautiful incidental music to accompany its theme songs, and generally the stereo soundtrack is fine for what is predominantly a comedy drama. As mentioned, this time I watched the show completely in English (I gave the Japanese version a quick spin and didn’t notice any immediate problems) and it took me a brief moment to get used to the usual American teen dub voices. But by golly if this isn’t a good dub! I was the same blubbering mess at the end of the show that I was when I watched the Japanese version, and that can only be a testament to how well the dub cast captured their characters. Anohana is one of those shows that is good in either language. 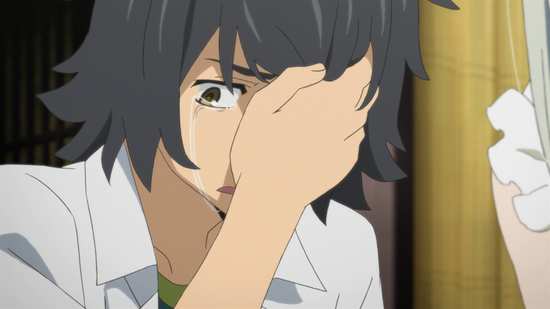 The discs present their content with static menus. In an error, the menu on disc 2 lists it as disc 1, but the episodes are correct.

The sole extras are on disc 2, and amount to the next episode previews for episodes 2-11. They run to around 22 seconds each, but there is no Play All option. 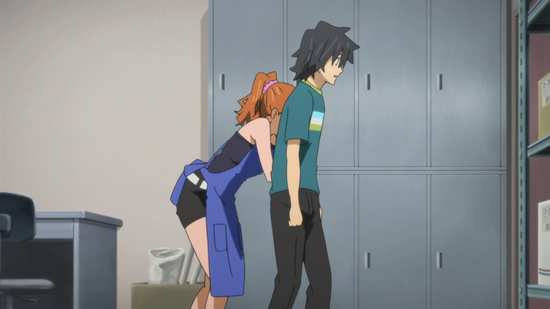 Note that the US re-release from Aniplex US came with more in the way of extras, textless credits and commercials, the English dub trailer, bloopers and a dub audio commentary, as well as a book. But you do pay for the privilege. 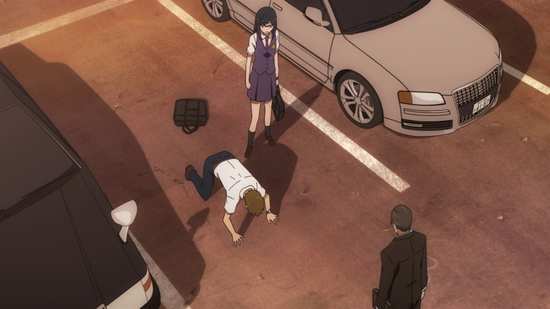 It’s getting crowded on my favourite anime shelf. I have to add another perfect series to the collection, something I never tire of doing. Anohana is a brilliant show, another must own title, and the shock is that it took this long for a UK release. It really should have come out here years ago. Anohana is about loss and grief, about how bereavement can drive people apart, and how it can bring people together as well. It’s about how people deal with pain, and how they begin to heal. In other words, Anohana is a very important, meaningful anime, yet the way it tells its story, with heart, with humour, and with no little magic, means that it’s also very accessible as well. 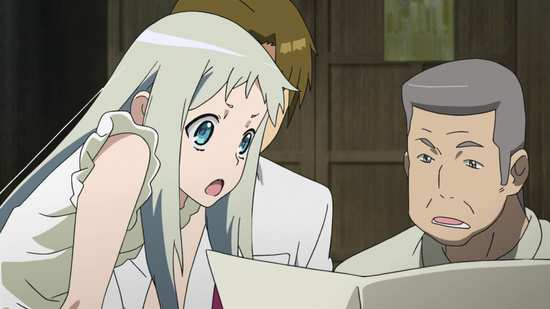 When Menma died, it not only tore apart the other five members of the Super Peace Busters, but when compounded with the death of his mother, it left Jinta isolated and withdrawn, so that when years later it came to starting high school, he gave the whole thing up and stayed shut-in at home, a total anti-social recluse, the complete opposite of who he had been as a child. So when Menma appears to him and him alone, the quite reasonable question arises as to whether she is actually the spirit of his childhood friend, or a hallucination. Either way, being reminded of Menma’s unfulfilled wish, and the sense that answering that wish will help her cross over, compels Jinta to actually leave the house, and reconnect with the other members of the gang, Poppo, Anaru, Yukiatsu, and Tsuruko. 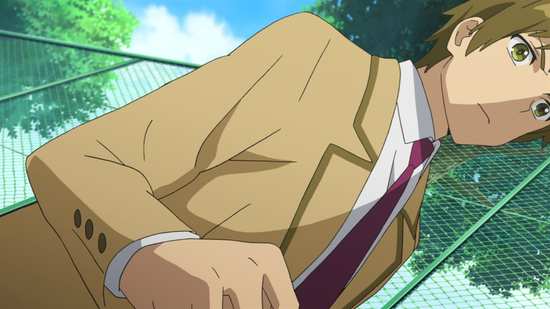 It’s not the easiest thing for Jinta to do, compounded with his outlandish story, although while Yukiatsu and Tsuruko may be sceptical and even scornful, Poppo’s a lot more supportive, while Anaru can humour him with the hope that it might help him move on. The fact of the matter is that all five of them have been unable to deal with Menma’s death, even if the others haven’t socially withdrawn the way that Jinta has, and unrequited and unresolved feelings from years previously have lingered, and even festered over that time. And given that they are now teenagers, with the added hormones that implies, makes dealing with those feelings next to impossible, especially for Yukiatsu. It’s not the happiest of reunions. 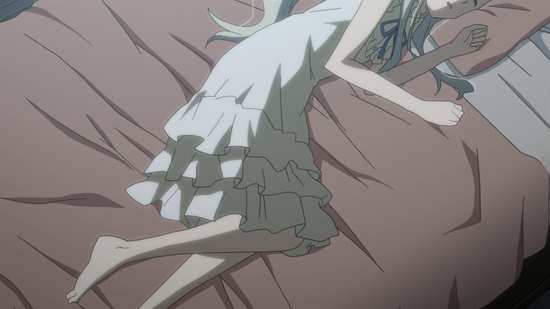 Things get more complicated when it turns out that Jinta isn’t just seeing things, that Menma’s spirit has moved in with him, and trying to find out her wish, helping her cross over forces each of them to examine their pasts, deal with the feelings and memories that they had kept locked up. Menma’s death may have driven the five apart, but it turns out that Menma’s ghost is what brings them back together again. 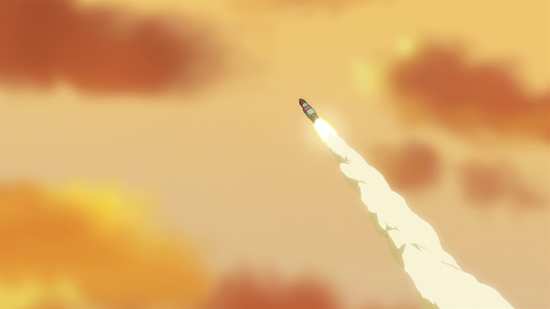 What makes this show work so well is the depth and detail that has gone into the characters. In a way we get to know two versions of each of them, their adolescent selves and who they were as children. Even Menma’s ghost is physically more mature than the girl who died. The transformation in Jinta is the most striking, from extrovert leader of the gang to loner recluse. Anaru was a quiet introvert who’s become more outgoing and social. Yukiatsu was number two in a gang who could never figure out why he wasn’t the leader, and while growing up he’s taken advantage of his talents and background to excel, he’s also got something of a sarcastic edge. Poppo was the baby of the group, but he’s strongly independent, a man of the world. And while it seems that Tsuruko has changed the least over the years, it turns out that all of them are harbouring a sense of guilt over what happened to Menma. 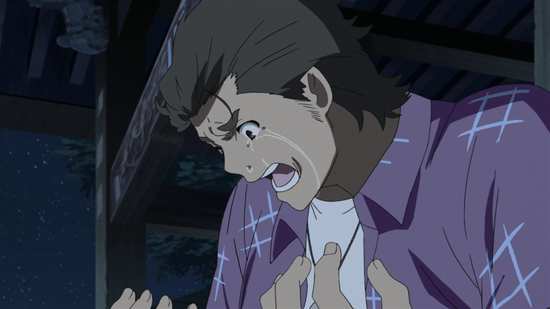 Watching them reunite, work through their issues is the dramatic heart of the show, but Anohana is no kitchen sink drama. It has a warm heart to it, and a delightful sense of humour as well, helped in no small measure by the character of Menma, both as child and spirit. She’s cute, caring, and full of whimsy, and her interactions with Jinta as his ‘imaginary’ friend are full of fun. Poppo’s quirky open-mindedness helps in this regard too, while it quickly becomes clear that Anaru’s sweet on Jinta as well, which is why she’s willing to give him more rope than he probably deserves at first. The interactions between the friends can be light and fun, when they aren’t dealing with their feelings, and the balance between the drama and the comedy makes the more emotional moments of the show very effective. Anohana is a show that will elicit tears in no small measure, and quite rightly so. 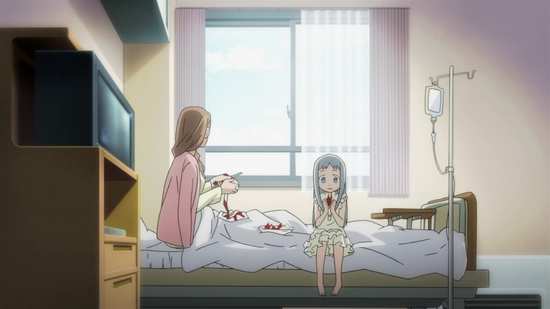 Anohana takes a subject that we spend all our lives avoiding, and deals with it in a real but sympathetic manner. There is an element of fantasy that makes the show work, certainly; who wouldn’t want a second chance to properly say goodbye to a loved one? But the feelings are very honest, and this is a show that will stay with you long after the end credits have rolled. MVM have lucked out in sourcing the dub for this release, as it’s a very good one, and this show deserves the widest audience that it can get. You’ll kick yourself if you miss out on Anohana!