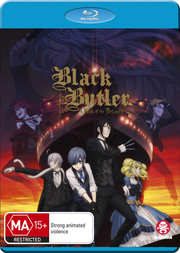 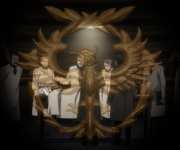 Review for Black Butler: Book of the Atlantic

It’s import time again! Black Butler has been a surprisingly strong franchise, live action movie notwithstanding. The first series way back when was a strong, introduction to the story, which went off the rails a bit at the end as it outpaced the manga as so many shows do, and wound up doing its own thing. It was even more radical in the second season, which was wholly original. It’s a contentious issue, but I’m a rare one for actually preferring that non canon second season. The franchise took quite a bit of a break after that, but when it came back, with the Black Butler “Books”, it was with purely canon material, pure manga adaptation. Manga Entertainment released the first two seasons on DVD in the UK, but with the third season, the honours fell to All the Anime, and by this time, we were getting Blu-ray as well. The problem is that they only released Book of Circus, and with their distribution deal with Funimation falling through, I’ve had to import the rest from Australia. I’ve previously reviewed the Book of Murder OVA, and now it’s finally time to take a look at the Book of the Atlantic feature film. 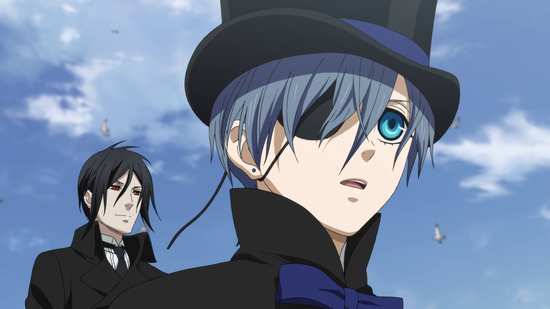 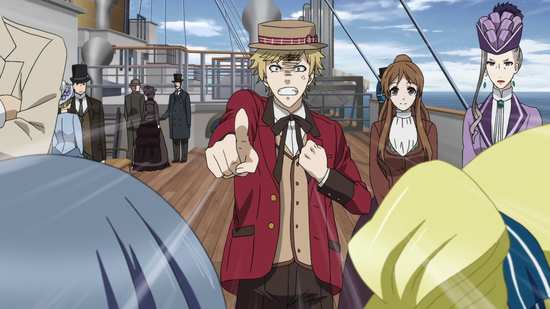 Ciel and Sebastian are taking an unlikely vacation, a pleasure cruise on the SS Campania, a transatlantic luxury liner. Okay, that’s not exactly true. The Queen’s watchdog was assigned to investigate a case of human trafficking and unethical research at the Karnstein Hospital, but the only thing they found were rumours of an elite group of nobles, the Aurora Society, and the strange meetings that occur aboard cruise ships. When the next such cruise coincided with Ciel’s fiancé Lizzy’s birthday trip on the Campania, it seemed urgent that Ciel take a holiday. 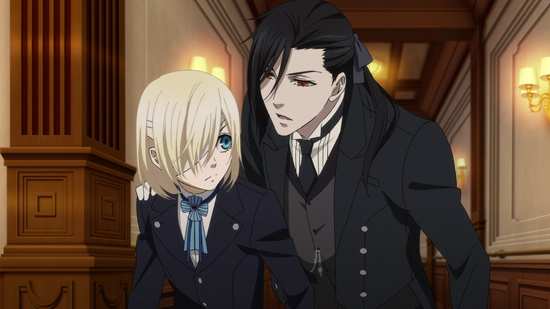 There is indeed a secret meeting scheduled aboard the Campania, and if Ciel wants to sneak in, he’ll have to sacrifice his dignity at the very least, and that’s just to meet the experimental physician Ryan Stoker, who has devised a way to cheat death. But he’s gone beyond the realm of medicine into a science that he can’t comprehend, and there are more familiar faces aboard the ship that have a vested interest in the outcome of his experiments. 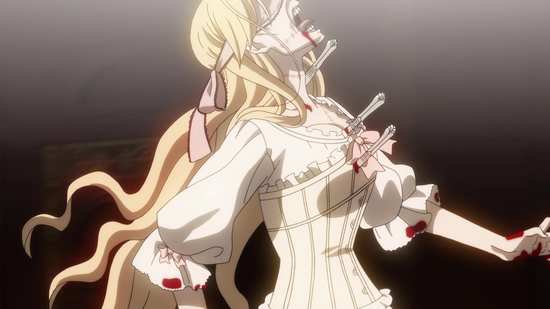 Black Butler Book of the Atlantic gets a 1.78:1 widescreen 1080p transfer. The image is clear and sharp, presented on this release with no issues other than the most minor of digital banding in darker scenes (ships’ holds get pretty dark). You’ll be familiar with the character designs from the previous instalments of the show, and the animation is on a par with those releases, if not a nudge more fluid. I have to say the production values do go up a tad for the feature film, designs are a little more ornate, and there are some wonderful set pieces. The film also makes use of extensive CG to bring its settings to life, and this time, the computer generated horses have a plot reason to look so janky. 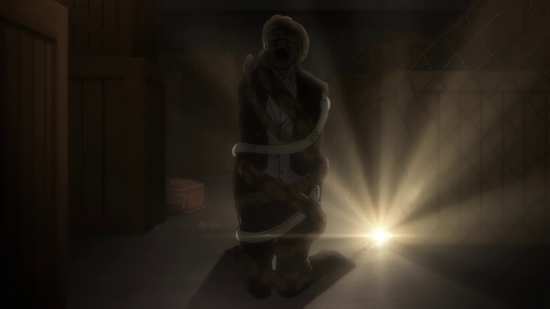 You have the choice between Dolby True HD 5.1 Surround English and Japanese, with optional subtitles and signs. The surround is nice and immersive, bringing the story to life, enhancing the action sequences, making the most of the music, while keeping the dialogue clear. The subtitles are timed accurately and are free of typos, but I did scratch my head at a couple of translation choices, Lizzy’s family are referred to as “Scotney” in the subtitles early on, while the characters actually say “Midford” in the Japanese audio. Technically both are correct, but it’s just an odd choice not to have the subtitles match the audio. 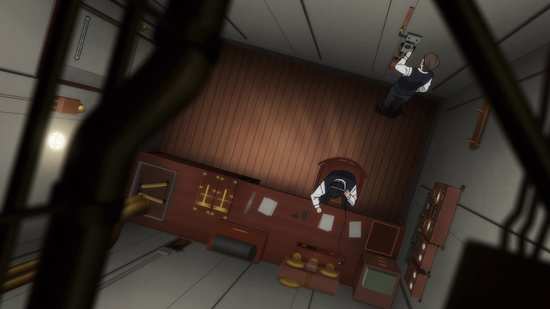 You get 1 disc in a BD Amaray case with some nice inner sleeve art. The disc boots to a static menu.

On the disc you’ll find 2:14 of Original Trailers, 1:21 of Commercials, and further trailers for Project Itoh: The Empire of Corpses, Project Itoh: Genocidal Organ, Fate/Grand Order – First Order, Steins;Gate – The Movie: Load Region of Déjà Vu, and a trailer for Madfest. 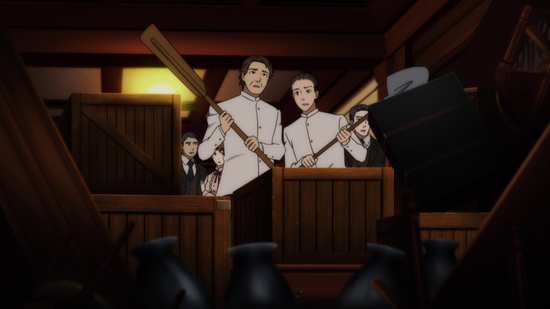 Zombies on the Titanic!

It is really interesting how things have panned out for the Black Butler Books. All three offerings are faithful adaptations of manga storylines, yet we get three different formats. It’s surprising how each format turns out to be apt for the specific story arc. Book of Circus, with its in depth storyline, character development and episodic narrative was perfectly suited for the serialised format, and that is what it got. Book of Murder on the other hand was a contemplative mystery which offered one hit of narrative. The OVA format turned out to suit that story well. Book of the Atlantic is a full-on action, horror comedy, fast paced and witty, with big set pieces and lavish settings. It’s ideal as a theatrical experience. 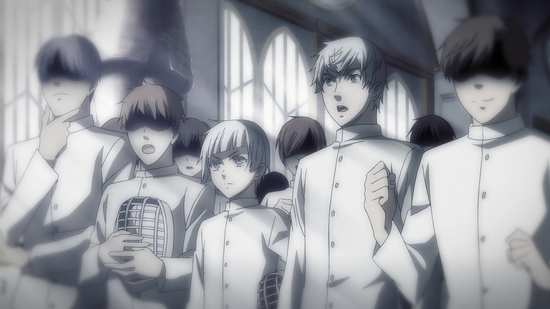 They really did remake Titanic with zombies. All the familiar elements are there, a cutting edge liner traversing the Atlantic, a little bit of ‘romance’ on the ship with Ciel spending time with his betrothed Lizzy, although in this case it’s the usual comedy romance that we get when the two are in close proximity. Lizzy’s family are on board, with a disapproving mother, a brother that detests Ciel, and a father who is even more impatient than Lizzy to welcome Ciel into the family. Ciel is out of his depth, while his butler Sebastian is more amused at the situation than usual. It’s a nice bit of light, comic fun before we get to the meat of the story. 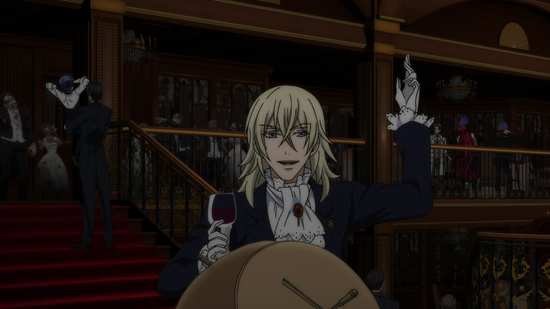 That of course is Dr Stoker and his experiments in immortality. Ciel sneaks out of a party to spy on Stoker, and stumbles into a show for the nobles on board, using electricity to bring the dead back to life. Only something goes wrong, and the dead girl revives with a taste for flesh. If that isn’t bad enough, the hold is filled with corpses for the Doctor’s experiments, except those coffins don’t even wait for him to attach the electrodes before the lids are popping open. It becomes clear that whatever is happening isn’t to the doctor’s design, and Ciel has a deeper mystery to uncover. 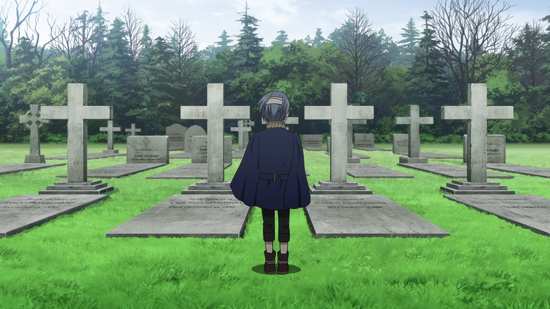 Soon hundreds of zombies are on the loose, and the passengers are fighting to stay alive long enough to get to the lifeboats. Ciel winds up trapped below decks with Lizzy as the zombies close in. It’s all thrilling and well directed fun. There are more than a few familiar faces from the Black Butler universe on the ship, and grim reapers Grell Sutcliff and Ronald Knox get a moment where they do their damndest to make Celine Dion proud. For fans of the franchise, there is a treat, as the story works in a way to reveal the early days of Ciel and Sebastian’s partnership, as the latter learns how to be a butler, and the former learns how to be the Earl Phantomhive following his previous ordeal. 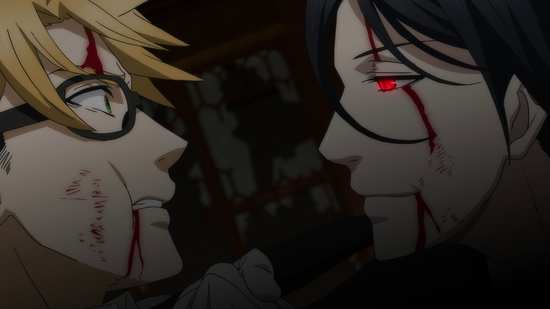 Black Butler Book of the Atlantic is fun, it’s unsubtle, it’s got the character comedy that you’d expect from the Black Butler stalwarts, and it has plenty of great action set pieces. It unfolds at a satisfying pace, and delivers a truly theatrical experience. If you are a fan of Black Butler, then you really do need this film in your collection.