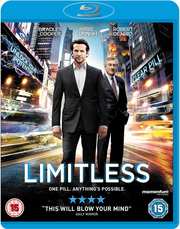 These days, if there is one statement that you hear more than the old saw “Humans only use 10% of their brain”, it’s “You know that old saw about humans using 10% of their brain has been completely debunked?”. You can’t take a step without tripping over someone eager to bust that particular myth. Still, it won’t stop Hollywood from making a movie based on the idea. You’ll have to suspend more disbelief than usual to enjoy Limitless, where as a sop to reality, it’s now 20%, not 10 that gets used.

Eddie Morra is a down and out writer, living off a contract for a book that he hasn’t been able to start to write. His flat is a mess, his girlfriend has just left him, and when he runs into his ex-wife’s brother, he’s able to be brutally honest about it all. Vern used to deal back in college, but now he has a more useful and potentially lucrative product. NZT48 is a wonder drug, an experimental substance that is yet to hit the market, but which Vern offers a single dose to Eddie for free. It’s the ultimate smart drug, unlocking the full potential of the human brain. In less than a night, Eddie has written a quarter of his manuscript, and it’s a masterpiece, and he’s cleaned his apartment on top. He needs more NZT, but as with any drug, there are prices to be paid, and side effects. As Eddie begins to turn his life around for the better, the consequences keep stacking up.

The film gets a 2.40:1 widescreen 1080p transfer with DTS-HD MA 5.1 Surround English with optional English subtitles. The audio is great, immersive, and making great use of the surround during the film’s more drug-fuelled moments. The dialogue is clear, and this is one of those rare films with a voiceover that works without slowing the pace down. The image is clear and colourful, making inventive use of visual effects to tell the story without overpowering the narrative. There is no problem to my eyes with compression or banding. This is also a rare film where the orange and teal colour grading really works well; the world is presented in a realistic manner, a little dull and drab. The world on NZT on the other hand becomes orange and teal, movie fantasy hyper-realistic, where everything pops with vibrancy and vigour, and Eddie’s Sherlock style powers of observation are switched on.

You get one disc in a BD Amaray, and in my case I found a promotional booklet for Troll Hunter, which was heading to the cinemas the year this Blu-ray was released. After playing trailers for Vanishing on 7th Street, Red Hill, The Mechanic and The Woman in Black, the disc boots to an animated menu.

The Alternate Ending lasts 5:14, and I found it preferable to that in the film, a little more ambiguous and edgy.

Finally there is the director’s commentary on the film with Neil Burger.

Limitless is a dumb smart movie. It’s not as bad as a dumb movie, but is certainly not as memorable as a smart movie. The premise has been debunked to begin with, but it makes for a neat story idea anyway, and you can just suspend your disbelief and go with the flow. But Limitless demands a greater leap of faith from the viewer with regards to how the story plays out. I found myself questioning whether some of the amazing feats the newly smart Eddie Morra accomplishes were actually, physically possible, whether enhancing intelligence, actually also enhanced muscle memory, reflexes, personality and charisma the way the clear little pill did in this film. You have to take it all, along with more than a few gaping plot holes with a whopping, blood pressure raising, kilo of salt to enjoy the film, but you can enjoy Limitless.

One rather unexpected direction the film took was with its antagonists. The film begins with Eddie discovering this new drug, and through certain events coming into possession of a large quantity of it, certainly enough to fuel his meteoric rise to prominence. With that sort of plot thread, I was expecting the antagonists to be the drug company behind NZT, with Eddie having to stay one step ahead of the corporation behind this illicit brain enhancer. Instead, the antagonists in the story turn out to be quite different, and really quite an effective storytelling device, even if it did mean Limitless foreshadowed one of its plot twists well in advance. It does leave the question of the drug’s creators hanging though, which might be an itch that audiences wanted scratched.

Limitless certainly delivers on its faux sci-fi idea, and it is really quite effective as a thriller. It has the suspense and the paranoia that its story demands, with effective performances from all involved. The action works well and there are some great set pieces to enjoy. Yet I can’t help but see a certain moral vacuity in the protagonist and in the film as a whole. This is a man whose first impulse with this new ability is to abuse it for personal gain, and it’s something he continues to do through the film. Limitless becomes an exercise in wish-fulfilment by proxy; a man who gets everything he ever wanted by popping a clear pill, and by choosing the ending the film has, instead of the better alternate ending in the extras, he doesn’t even have to pay the price that everyone else did.

Limitless is entertaining, well-written, with engaging characters, and is a well put together suspenseful story. The Blu-ray experience is as you would expect, but this is a film that’s lacking in heart, is ethically unsound, and has no message to impart other than to once more worship at the altar of greed and selfishness.