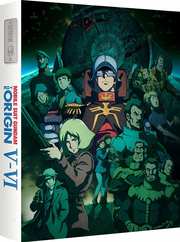 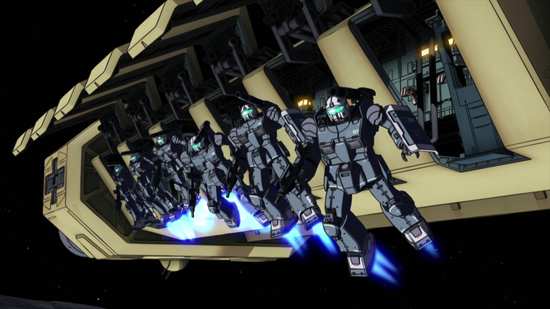 At last! The final two films chronicling the events that led to the start of Mobile Suit Gundam. Volumes 1 to IV were released about six months ago (you can read my review of those here). 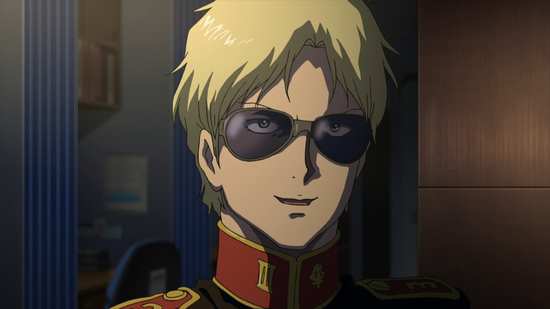 Having re-read that review, I find myself agreeing with the notion that the whole series of Origin films, made as a post-note to the series in 2015-16, “… provide a very cogent back-story to what later becomes a sprawling, space epic with a pretty singular core – giant mecha-suits battling each other in space”.

If you haven’t seen any Gundam, these origin films would be a great place to start. Whilst they don’t have the ‘retro’ vibe that makes some of the previous series such a delight, they do offer up very decent story-lines, contemporary animation and some excellent characterisation. 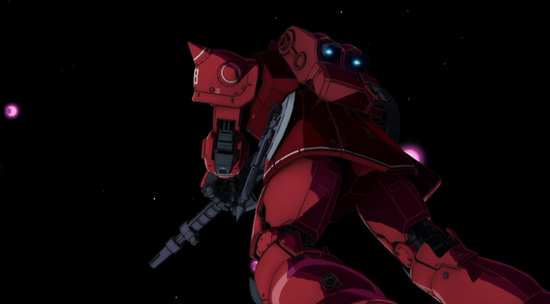 The Gundam Origin story started out life as a manga by Yoshikazu Yasuhiko, which sets out to retell the story of the saga and modernise its look and feel. The anime version was originally announced as a four-parter (all released in the previous set) but a fifth and sixth film were added slightly later, featuring a somewhat separate story which is why they have been packaged up as a set of their own and have now, finally, had a welcome release here in the UK.

So, this edition has the two final films (or OVAs to be more precise) ; “Clash at Loum” and “Rise of the Red Comet”. 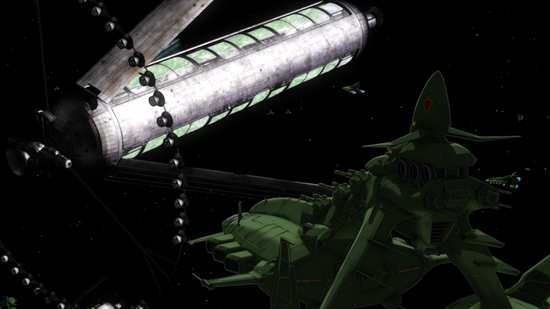 These open with one of the most convoluted back-story narrations ever committed to film; it runs for a very tedious 10 minutes, playing out like a sped up history lesson in order to set up the premise for the film itself.

As we learn, it’s now Universal Century 0079, and humanity has space itself into a battlefield. The Principality of Zeon forces advance after wiping out half the world’s population by carrying out Operation British (the colony drop). In response, the Earth Federation Forces mobilise their overwhelming fighting strength to regain the advantage. 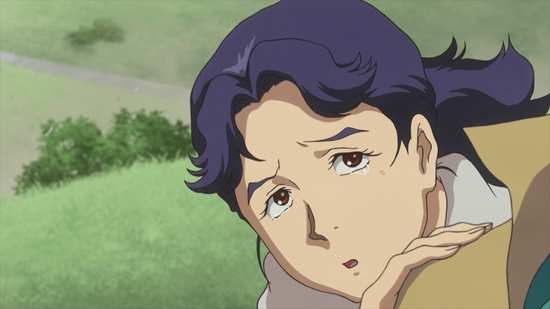 Film V tracks the ’One Year War’ between Earth and the Principality of Zeon, where gas attacks cruelly wiped out whole space colonies before being banned by both sides, along with nuclear warheads. (This helps make sense of why nations battle it out using giant mecha mobile suits). 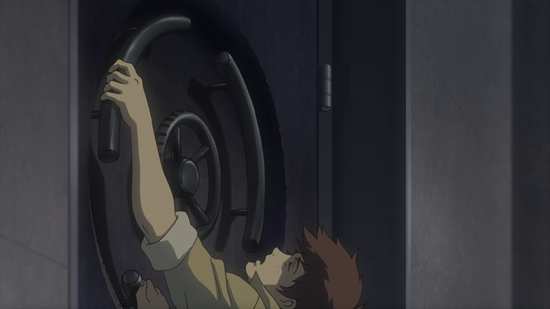 We also get a glimpse into the backgrounds of the Zabi family (the Zeon ‘baddies’), Sayla Mass and veteran Zeon soldier Ramba Ral and his lover Hamon. Then there’s Amuro and Fraw, leading peaceful lives at Side 7. But life is about to get a whole lot more complex. Zeon ace, and Gundam superstar, Char Aznable, is about to get his revenge. So (finally), the stage is set for a good old Gundam style mecha battle and the ‘Clash at Loum’ is about to begin. Which is where film V closes and makes where for the final chapter – part VI.

The final OVA moves on from the battle at Loum to, very cleverly, get us to a perfect set-up of the narrative to join up with the very first episode of the original Mobile Suit Gundam series. There is even time for some filler stories which definitely aid the momentum of the OVAs and help build characterisation. For example, we meet Amuro Ray before his piloting days and we see Sayla step up to defend a town against rioting, both sub-stories providing a welcome break from the otherwise fairly relentless battling sequences as the war rages. 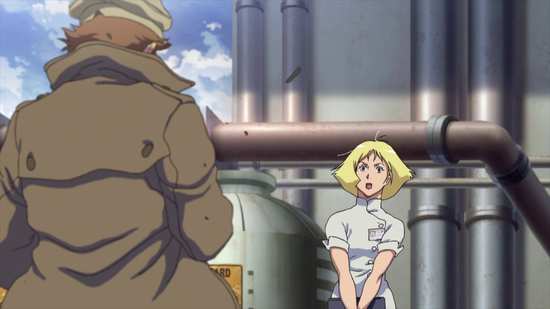 Having said that, these films are really more about the Mecha Mobile Suit action that anything else and the animation during fight sequences is, not only brilliantly conceived and choreographed, but really quite detailed too. The audio effects really add to the excitement and if giant Transformers-like robots (manned by humans) knocking seven shades out of each other sounds like your idea of fun, then you’re going to love these films. 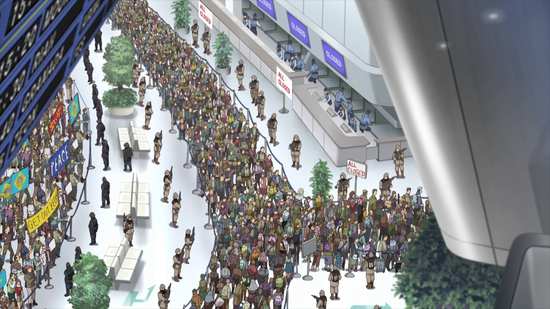 The films come with stereo options for original Japanese with subs or a US English dub, which is what I opted for and which I found to be perfectly adequate.
There are very few extras on the disc; just trailers for the two OVAs, which may be useful if you are trying to convince a friend to watch the films with you, though pretty superfluous otherwise.

If you grab a special edition, it looks like to ships with a nice artwork book among other goodies so, if you’re a Gundam nut, it may be worth shelling out a bit extra for that. 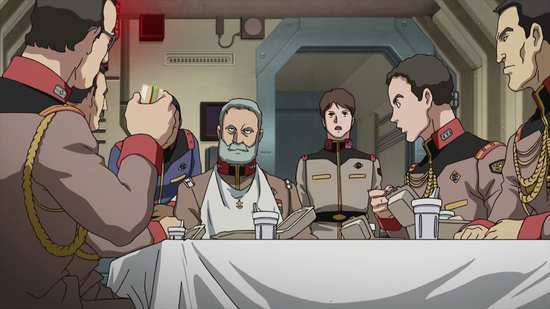 The Gundam Origin movies are a nice addition to the canon and provide a useful back-story for the Gundam obsessive, as well as some fun action sequences for the rest of us. Having viewed these some months after the previous OVAs, and shortly after watching the excellent concluding series of Gundam 00, I felt that the films were possibly a little less exciting than the first four, but not enough to dock a point. 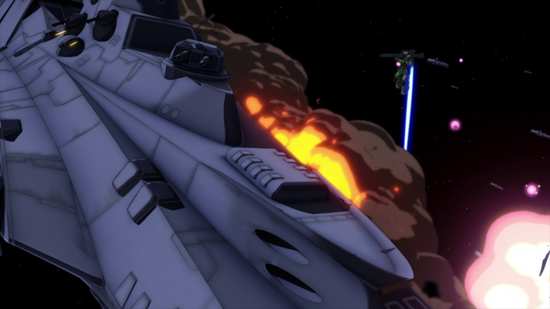 The opening back-story narration was a bit painful at the start of OVA 5, but could be argued to be fairly essential, so I won’t be mean about that either.
If I ever decide to do a complete Gundam marathon, I may well start with re-watching all six origin OVAs to see how they work in context.

If you’re a Gundam fan, or just thinking of becoming one, it’s definitely worth picking them up.