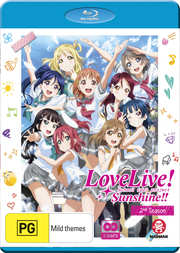 How long would you wait for a second season of an anime to come to home video? All the Anime released season 1 of Love Live Sunshine in June 2018, and now, 18 months later, it still isn’t on their schedule, although they are finally getting around to one of their first license announcements, Plastic Memories. Plastic Memories has been out in Australia for over three years at the time of writing. Australia is where I imported Love Live Sunshine Season 2 from after getting tired of waiting, although the Australians had to wait a while as well. Season 1 came out there in February 2018, and Season 2 followed in May 2019, 15 months. There was a similar gap in the US, (they’re so far ahead that they’ve recently released a 26 episode complete series collection with both seasons) so perhaps I’m being too harsh on All the Anime. After all, last August they did distribute a Japanese import version of the Love Live Sunshine movie which the US is only now getting. The bottom line is that I’m just impatient! I want to see what happens to Aqours after the disappointment at the end of season 1. 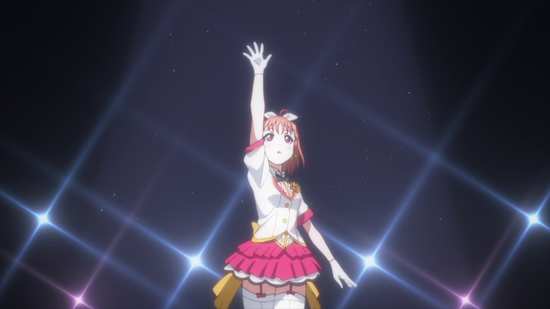 Chika Takami’s high school life was pleasantly aimless, until the day she saw the school idol group μ’s on a big screen billboard. From that moment on, Chika was inspired to start a school idol group of her own, and winds up facing some of the same problems; such as getting permission to form a school idol club in Uranohoshi High School, as well as recruiting a decent number of like minded girls into the group. But μ’s hit the big time in the big city of Tokyo before conquering the Love Live competition. Chika lives in a quiet seaside town. Does she even have a chance of getting started, let alone hitting the big time? 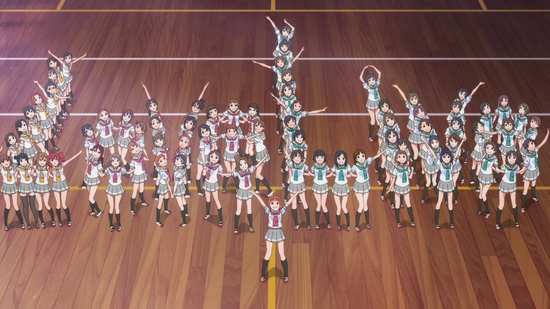 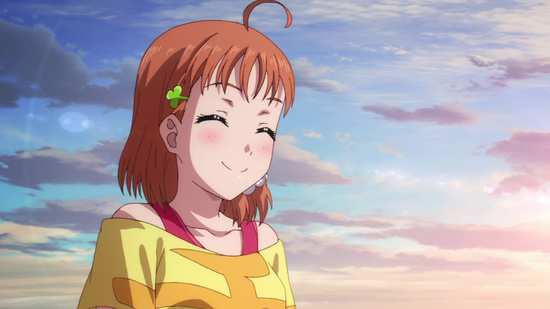 Love Live Sunshine gets a 1.78:1 widescreen 1080p transfer on these discs. The image is clear and sharp, and the animation pops with bright and vivid colours. The character designs are appealing and memorable, while the animation is smooth and energetic. Perky high school girls of various anime archetypes populate the cast, and the animation does all these characters justice. The big difference here is in the CGI. In earlier idol shows such as Super Sonico, and more appropriately the original Love Live, when it came to the heavily dance choreographed songs, the character animation would switch from 2D to cel-shaded 3D, and the CG versions would be concave-faced distortions of the 2D characters. It was a seriously freaky moment in each episode. In Love Live Sunshine, the 3D cel-shaded CGI characters look identical to their 2D counterparts. By Jove! I think they’ve cracked it. Of course, now I’ve started watching Bang Dream, and for the second season, they’ve switched to completely CG, and the whole contrast between two styles is a non-issue. 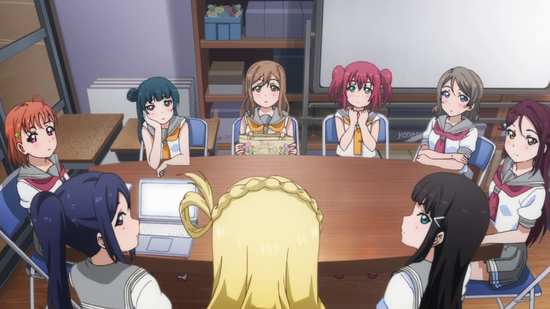 You have the choice between Dolby True HD 5.1 Surround English with signs, and 2.0 Stereo Japanese with subtitles, all locked during playback. Note that the English dub retains the Japanese songs. I gave it a quick try and failed to appreciate the high pitched squeakiness of the school girls. I preferred the Japanese audio, even if the character archetypes were all present and correct, with little or no nuance to help them stand out. The performances are lively and appealing though, and I actually preferred the songs in the sequel to those in the original Love Live. 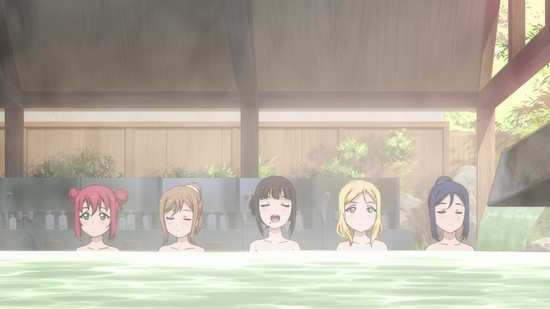 You get two discs in a BD Amaray case, with one held on a centrally hinged panel. The inner sleeve gets some nice character art.

Disc 1 autoplays with a trailer for Show By Rock S2. 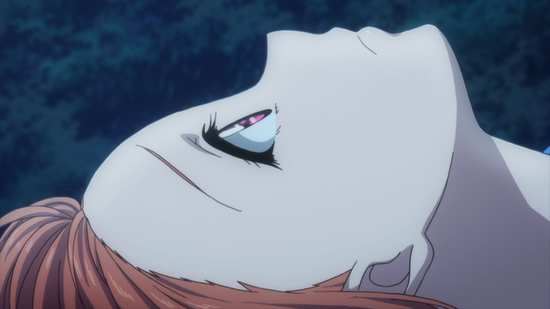 Disc 2 autoplays with a trailer for Teasing Master Takagi-san.

You’ll find Promo Videos on this disc, along with the textless credits, albeit with locked subtitles. There are further trailers for Touken Ranbu Hanamaru S2, Konohana Kitan, Cardcaptor Sakura Clear Card, Free – Take Your Marks, and Tsukigakirei. 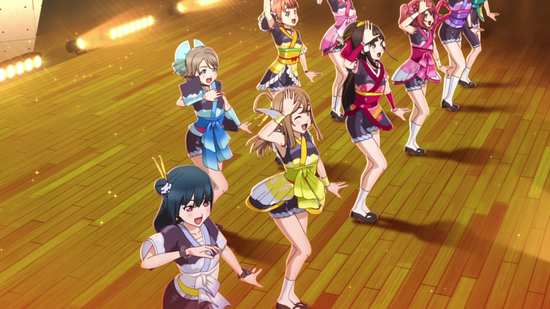 When I watched the first season of Love Live Sunshine, I had my concerns about it being a beat for beat remake of the original Love Live. Given that the show’s format has to confirm to the idea of high school girls becoming pop idols and taking part in a national song contest, and both stories featured idol groups competing to keep their respective schools from closing down, by the end of the series, I simply resigned myself to accepting Love Live Sunshine as a remake in all but name, and decided to enjoy it for what it is. So along comes Season 2 of Love Live Sunshine, and despite it effectively telling the same story, it reveals itself to be anything but a remake. It manages to do something really quite different within the constraints of the same premise, and it’s brilliant that it sets itself apart from the original. 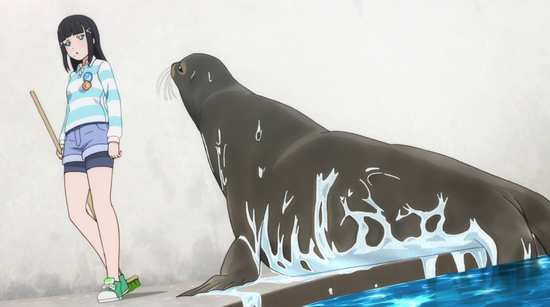 The first and most obvious thing is that in the end, the story doesn’t in fact unfold in the same way. There’s one significant difference that changes the whole emotional tone of the show. The second thing is that the creators realise pretty quickly that simply focusing on the Love Live competition would be redundant, given that the original series did that so effectively. There’s no point in repeating the process so this series doesn’t even try. Sure the girls of Aqours are determined to win, and spend their time training and practicing to succeed. But we don’t actually see the mechanics of the competition. There will be a build up to a stage of Love Live, the preliminaries, the qualifiers and the final, but the episode in question will take us to the girls arriving at the venue, the end credits will roll, and as a bonus, we get their competition performance after the end credits, and some idea of where they placed. We certainly don’t see any of the other groups performing, and we don’t get to see them being judged; that all happens off screen. 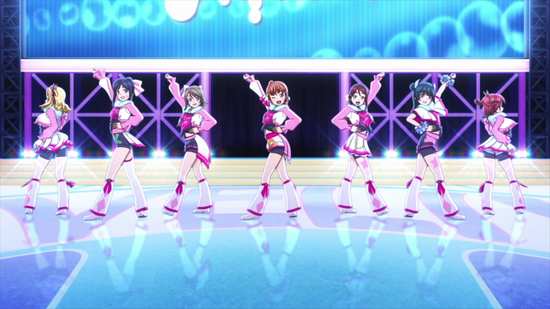 Instead, the second season is about the girls, their home town, their fight to save their school, and more importantly their living every moment as it comes. With the Sword of Damocles hanging over their school, they realise that they have to appreciate and cherish all the time they spend together, and with three of their number destined to graduate regardless of whether they save the school or not, there is a sense of finality that grows as the series progresses to its conclusion. The show projects a tone of wistful melancholy and incipient nostalgia the closer it gets to the end. It’s an experience wholly driven by emotion, and I have to say the show’s score is masterful in driving that feeling. It’s a very effective piece of storytelling, even given the cookie-cutter moe stereotypes that comprise the main cast. 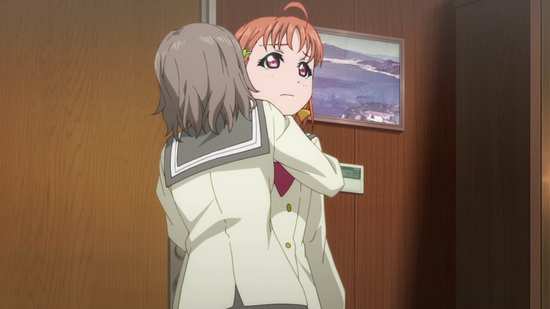 So in the end, Love Live Sunshine tells much the same story as the original Love Live, but manages to find a new way of doing it that makes this series sit very well as a companion piece to the original. I’m certainly glad that I saw the conclusion to this show, but having to wait eighteen months to do so hasn’t done the viewing experience any favours. At the time of writing, a UK release of Season 2 isn’t even on the schedule, while this Australian release has been out for 7 months at this point, so I hope that All the Anime can speed things up a little.