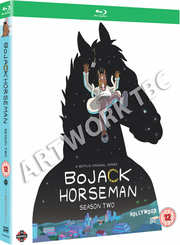 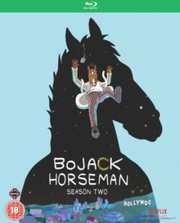 I’ve been tentative about watching this second season of BoJack Horseman. I had such a good time with Season 1, I was so pleasantly surprised by how good it was, that I had begun second guessing myself, wondering if I had imagined its tragicomic brilliance and deftly crafted charms. Could I have been fooling myself? As this second season begins, BoJack Horseman might be asking himself the same question, as after twelve episodes of a self-indulgent narcissistic down-spiral, it looks as if his career has finally picked up, getting cast as his hero in a feature film biopic. If things start going right for our anti-hero, this might not be the same show as before. 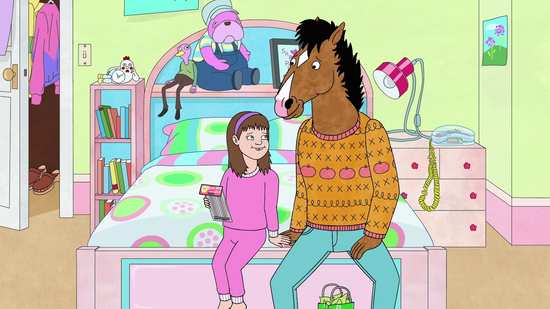 In 1987, BoJack Horseman was the star of the hit sitcom, Horsin’ Around, a family favourite that ran for 9 years. And since his glory days he’s had nothing but a stay at home life with his freeloading houseguest Todd, occasionally sleeping with his agent Princess Carolyn and butting heads with his rival Peanutbutter, while dealing with his ambivalent feelings for his biographer (and Peanutbutter’s wife), Diane Nguyen. 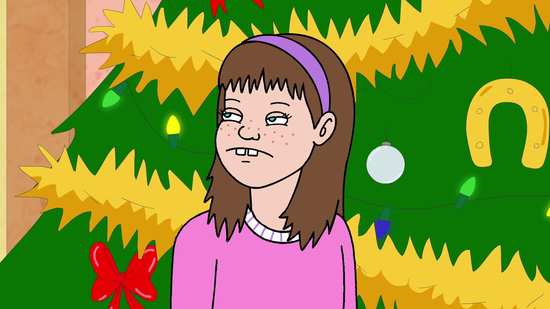 The next twelve episodes of BoJack Horseman are presented across two Blu-rays from Manga Entertainment, although they are preceded by the Christmas Special. 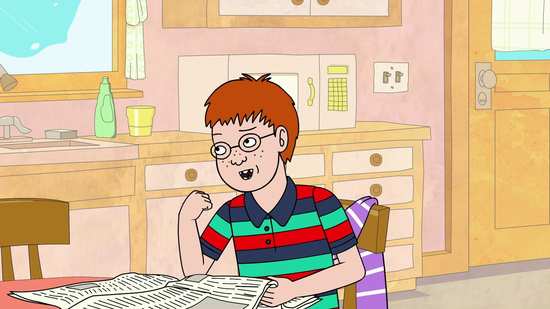 BoJack Horseman gets a 1.78:1 widescreen 1080p transfer. The image is clear and sharp, there is no problem with compression, and no sign of aliasing or banding. The animation is smooth and detail levels are excellent. It’s quite an idiosyncratic cartoon, presenting a world filled with humans and animals in humanoid form, not least the titular BoJack Horseman. The character designs are appealing, memorable and simple as you would expect, but definitely establishing a tone for the show which is fairly unique. 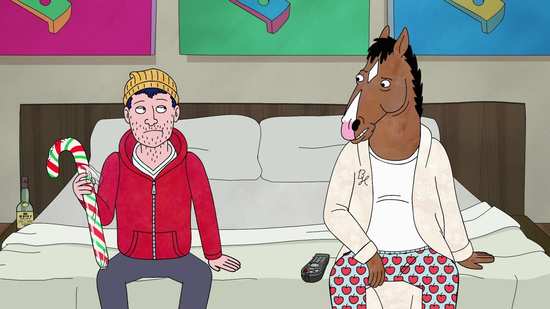 You have the choice between DTS-HD MA 5.1 Surround and 2.0 Stereo English with optional subtitles. The sound is fine with no glitches, the dialogue is clear, and the music suits the show well. I have to say that this isn’t a show that desperately needs a surround mix, but it’s nice to have the option, even if it’s just for a little bit of ambience. 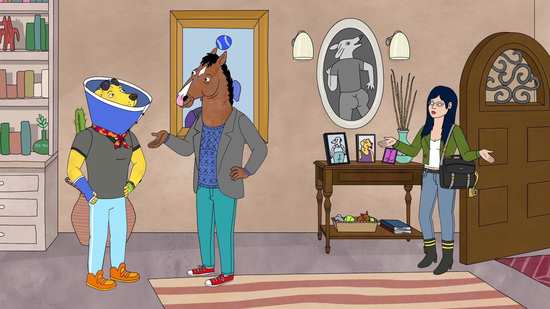 Each episode gets an audio commentary from various members of the cast and crew.

Disc 1 has the Episode 201 Animatic, the previs version of the episode which lasts 26:18. 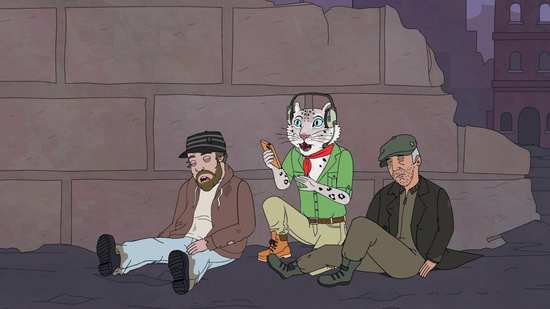 Disc 2 has a Character Art Gallery which runs as a 3:25 slideshow, and a Background Art Gallery which lasts 3:00. There is also a Grouplove Live in Amsterdam bit, which is 48 seconds of end theme song... on a boat. 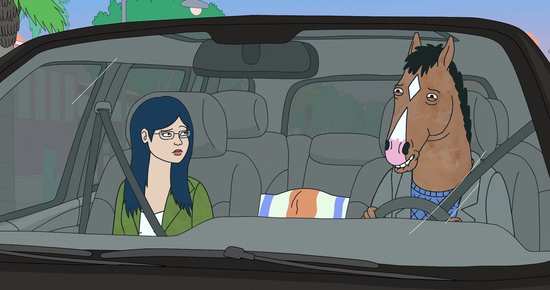 It may be sheer pettiness on my part, but there is a small part of my ego that hopes that BoJack Horseman doesn’t get any better, as I’ve already hit peak review score with Season 2. I’ll have to nail a bit to the top of the scale if Season 3 is any better. I wrote about just how brilliant this satirical mirror to the entertainment industry was when I reviewed the first season, and drew comparisons to the equally awesome Episodes. Season 2 builds on what came before, wanders into some seriously dark alleys and just gets better and better. It’s already reached that point where it can count on some a-list guest stars (Paul McCartney and Ricky Gervais are just two in this season), and its storylines continue to make you think as much as they make you laugh. This series was broadcast in 2015, and it was already pre-empting the MeToo movement with one of its episodes. 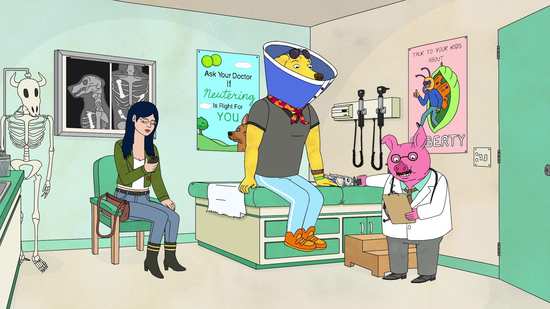 It continues to follow the lives of its central characters, the titular BoJack, his agent Princess Carolyn, his rival Mr Peanutbutter and his wife (and BoJack’s biographer) Diane, and BoJack’s fulltime mooching deadbeat lodger, Todd. In this season, BoJack’s career is on the up, as he starts in his dream movie about his childhood hero, Secretariat. Mr Peanutbutter blows most of his money on Todd’s harebrained schemes, winds up getting a job, and rediscovered by Hollywood, to host a new game show. Diane also has a chance to level up her career, getting to write something of true meaning, shadowing a philanthropist doing good work in a war-torn country, and Princess Carolyn has the chance to break free of her job and start a talent agency of her own. Even Todd seizes the chance to break out of his deadbeat existence, and find something meaningful in his life, when he discovers the improvisational comedy scene. It all looks to be coming up roses for the characters, but roses need a lot of fertiliser, and they have to wade through so much metaphorical manure to achieve their dreams, that it may not be worth it. 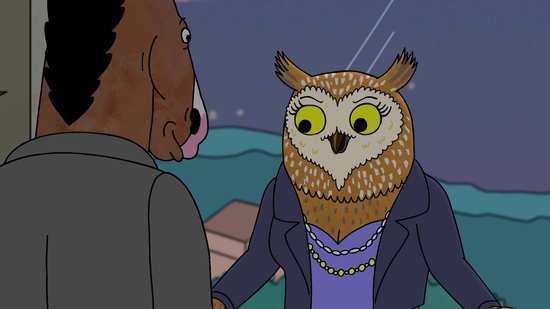 I have to admit that I did have a wobble at the start, as the first episode on disc 1 is actually the mid-hiatus Christmas episode, which sees BoJack and Todd hanging out, watching a Horsin’ Around Christmas Special and offering colour commentary. It’s a wry mirror of old sitcoms, complete with ‘that one guy’ in the live studio audience, and as contrived and as cheesy a message as can be shoehorned into a sitcom. It doesn’t quite have the same bite as the series proper, and is rather self-referential. 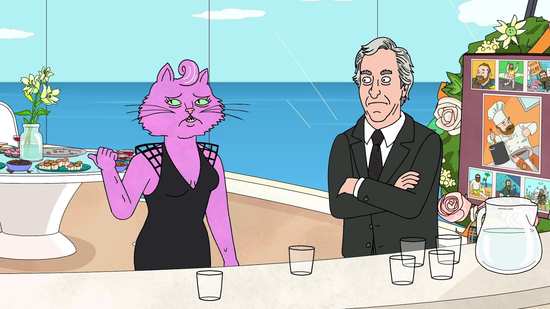 BoJack is in heaven in the opening episode of the second series proper though, starring in his dream movie, and it all comes down in a crash when he realises that he made his name in a sitcom in the nineties, and he doesn’t really know how to act. It’s a tortuous process, including a death on set, a change of director, and BoJack going AWOL to look up an old flame from the nineties, only to make one of those cringy mistakes that cause sphincters to tighten in embarrassment. He does have one true chance for love though, as early on in the season, he meets Wanda, a studio executive who has been in a coma for thirty years, and as a result has no idea who BoJack is. It all seems to be going great, until she gets to know BoJack. 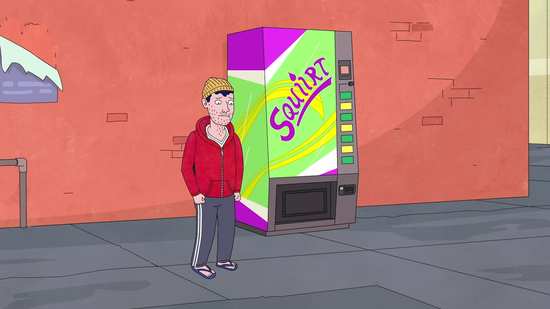 As well as Peanutbutter’s financial problems, he has relationship problems too, as he’s so into his wife Diane that he stops seeing her and starts projecting himself instead. It leads to the surprise party from hell, which is one of this season’s experimental narratives, telling three relationship stories in turn, from the end of that party. Diane winds up needing space (It doesn’t help that she tried to out a beloved TV personality as a sex criminal, and failed when it turned out that people would much rather believe comfortable lies than the truth), and takes an offer she got in the previous season, to write about Sebastian St Clair, the philanthropist doing meaningful work in Cordovia, a country torn apart by war. It’s her chance to do something real, to make a difference, until she learns that St Clair is even more of an egotist than Peanutbutter. Of course she’s not going to simply go home and admit she was wrong. And BoJack ends up with another deadbeat living in his house. 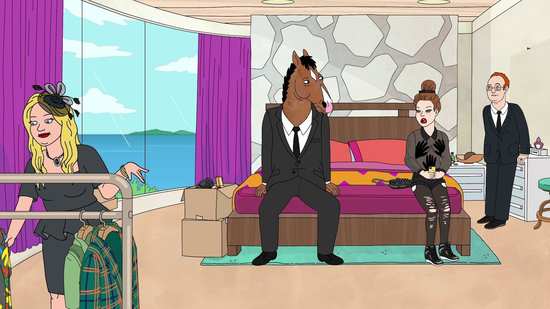 Speaking of which, Todd is on a journey to discover himself, to better himself, and he’s about to walk into the Church of Scientology, when he’s scouted by an improv comedian from the building next door. It’s hard to do Scientology satires when you can get sued, but it turns out that the Improv Comedy scene of the 21st Century is structured in much the same way. Todd is stuck in a cult that he can’t get out of. 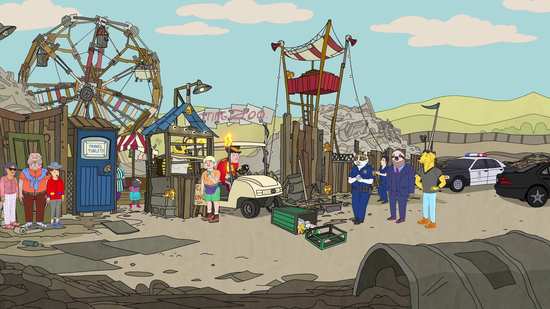 Princess Carolyn becomes increasingly disillusioned with her job at the Vigor talent agency. Her relationship with Vincent ends, although she never learns the obvious truth. She does start a relationship with another agent from Vigor, a long time confidante named Rutabaga, who is having trouble in his marriage. They hatch a plan to sneak as many clients out with them as possible when they leave Vigor to set up their own talent agency, but there’s a twist. Of all the storylines in this season of BoJack Horseman, for some reason this seemed familiar. I think I might have seen it in LA Law. 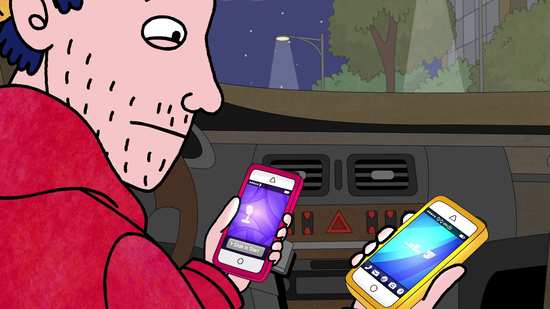 There’s a lot more besides, and it’s rare that this show isn’t downright hilarious. You’ll have to watch it again to catch all the jokes you missed the first time because of laughing, and then you’ll have to watch it again to catch all the visual gags that take place in the background of each frame. And then you’ll want to watch it again for the audio commentaries. There is so much life and re-watch value in this show that you’ll have a hard time putting it down. There’s also a great deal of continuity (even the opening credits change with the story) and character development in the show; it’s serialised storytelling at its most deft, as each episode can stand alone as well. If there is a weakness, it’s that one episode that doesn’t quite fit in, an episode where they must have thought to just drop the overarching story and do something wacky instead. In Season 1, it was BoJack Hates the Troops, this year it was Chickens, a commentary on mass consumption and farming meat, which is unsettling and creepy in the wrong way. This is a world where animals are people (not least the title character), so this is a world where you have chickens who are people, and chickens that are raised as meat, and in the episode there are chicken people who raise meat chicken, and use that fact in their advertising. It’s worse than Soylent Green. 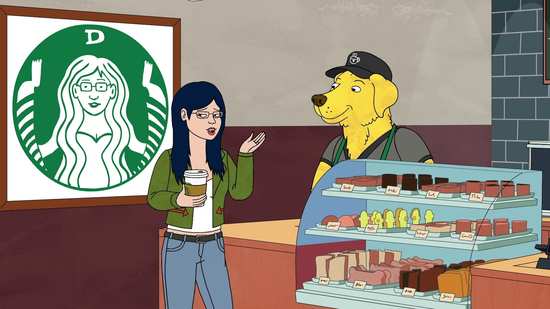 BoJack Horseman is the funniest show I’m watching right now. It’s a comedy about Hollywood success, the entertainment industry, and constant, skin-crawling, toe-curling failure. Even when this cast of deliciously flawed and painfully human characters achieve some success, it’s always tainted with a dose of reality that makes any celebration an exercise in hypocrisy. It is an adult show; this release is rated 18 for a reason, but if you have any interest in celebrity and show business (and who doesn’t?), then you need this show in your life. The only annoyance is that at the time of writing, there is no sight of Season 3 on the release schedule, not even in the US. Apparently, and in all defiance of my grading woes, BoJack Horseman only gets better.