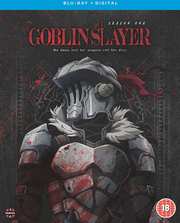 Review for Goblin Slayer: Season One

Warning! Watching this show back to back with That Time I Got Reincarnated as a Slime will cause cognitive dissonance. 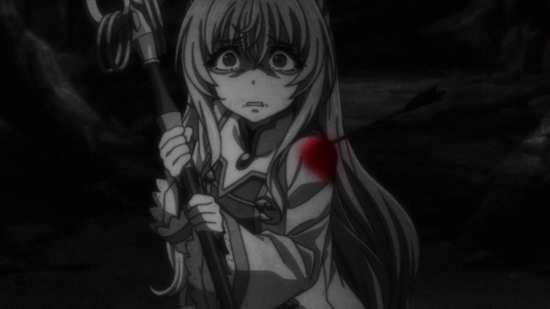 Goblin Slayer isn’t one of those ‘lost in another world’ shows that we get, but it does rely on a lot of role playing game tropes for its story world. The most obvious one is that of the low level monster, the easy-to-kill prey that players spend 50 hours at the start of the game slaughtering just so they can level up. They’re the cannon fodder, the weak, defenceless targets that you hack and slash your way through just to get enough in the way of stats to do something meaningful in the game. Only what if they’re not? What if these low-level monsters are sneaky, cunning, evil and malicious, and far more dangerous than you’ve been led to believe? Enter the Goblin Slayer! 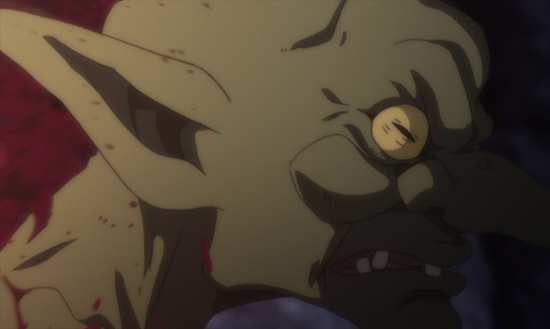 When a newly qualified Priestess adventurer, with a lowest ranked porcelain class tag around her neck walks into a guild looking for a quest, she’s quickly recruited by three others looking to make a quick mark by wiping out a nest of goblins. Goblins are the lowest of the low, the weakest enemies, and an easy way to pick up a reputation and experience. Except that goblins are wily, cunning, evil and smart, and with her new found allies dead, injured or worse, the Priestess’ career as an adventurer looks to be a short and fruitless one. 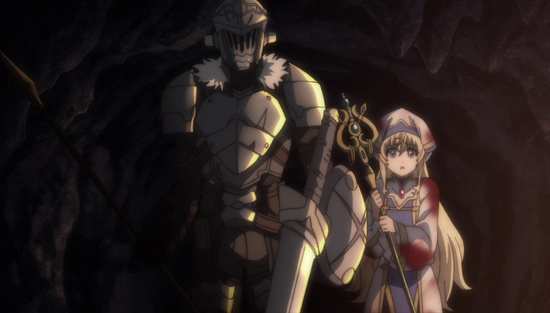 That’s when the Goblin Slayer walks into the cave. This armoured man has a silver ranked tag, the highest rank for an active adventurer, but he’s earned his name and reputation by his single minded mission to slaughter all goblins, and he has the experience and ability to deal with these vermin. Even still, he’s looked down upon by other adventurers as incapable and unwilling to deal with a real challenge, and his rank and attainments are constantly questioned. But when he rescues the Priestess, he gets a new follower on his adventures. 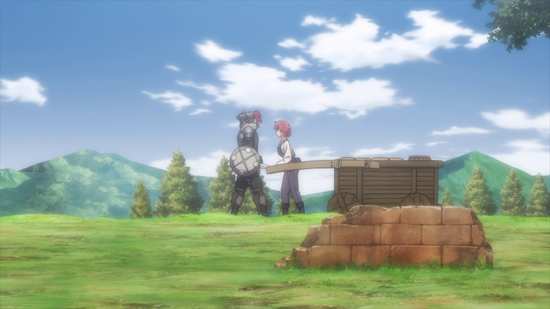 Twelve episodes of Goblin Slayer are presented across two Blu-rays from Manga Entertainment.

Disc 1
1. The Fate of Certain Adventurers
2. Goblin Slayer
3. Unexpected Visitors
4. Strong
5. Adventures and Daily Life
6. Goblin Slayer in the Water Town
7. Onward Unto Death
8. Whispers and Prayers and Chants
9. There and Back Again

Disc 2
10. Dozing
11. A Gathering of Adventurers
12. The Fate of a Certain Adventurer 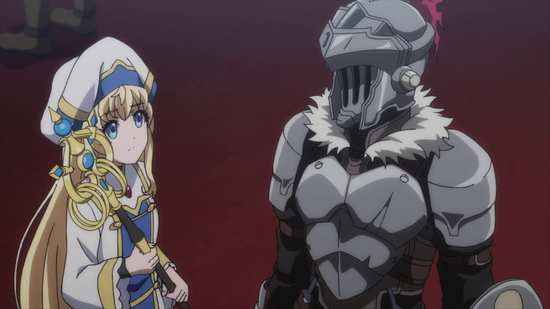 When there’s flickering torchlight in a dungeon, you can bet that there will be digital banding, but that’s really the only issue with Goblin Slayer, and not that bad when you come to think about it. The 1.78:1 widescreen 1080p transfer is clear and sharp, detail levels are good, and the animation comes across well. The creators had to find a balance between moody horror and clarity, and they may have opted to lean towards clarity a little too much. It takes the edge of the creepy tone of the story. One bit of unnecessary cheapness is the cut and paste on this world’s moons, which both have the exact same craters. It’s one of those trivial niggles that you can’t unsee once you’ve noticed it. But the rest of the world design is strong; the character designs are appealing when needed, hideous when it comes to the goblins. It’s a very watchable show. 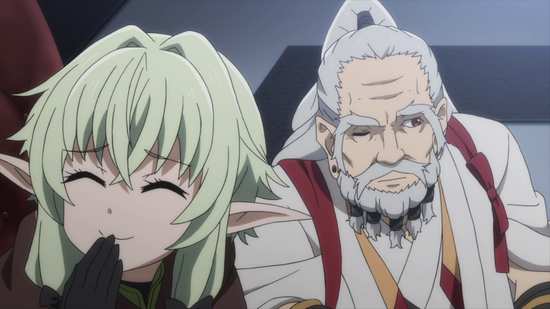 Goblin Slayer offers you the choice between Dolby TrueHD 5.1 Surround English and 2.0 Stereo Japanese with subtitles and signs locked during playback. The audio is fine, without issue on these discs. The actors are suited to their roles, and the action and music comes across well in the Japanese stereo that I watched. The subtitles are timed accurately and are free of typographical error. 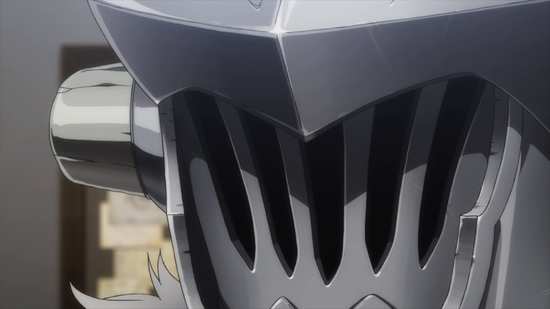 Disc 2 has the extras, beginning with Goblin Slayer Tabletop Talk. This chat between production staff and actors lasts 20:04. 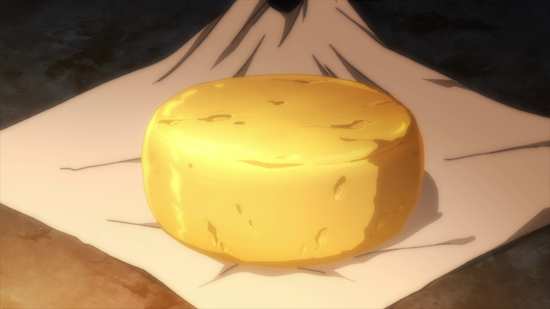 Finally there are the textless credits, albeit with player locked subtitles. 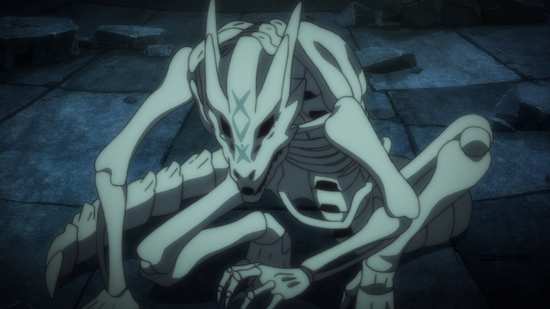 Goblin Slayer is another deceptively good show. I love it when this happens, that I go into a series with certain preconceptions and prejudices, and it might even look at first as if it will live down to my expectations, and then it does something that completely blows me away. I may have mentioned my disdain for isekai, lost-in-another-world shows, but close behind that genre are the fantasy shows that stick close to RPG tropes. It’s really hard to take a story seriously when it displays all those ‘game’ rules that make little sense in the real world. 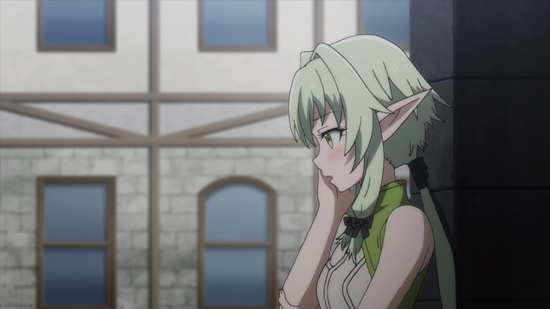 Goblin Slayer seems like such a show at first, presenting its fantasy world of one with quests and missions, and a society of adventurers looking to complete those quests, earn experience to level up the dog-tags around their neck all the way from porcelain, through silver, gold, and eventually platinum. These adventurers all look for the big missions, and cast disdain on lesser missions and lower adversaries, just like the goblins. This society revolves around the Guild Hall where quests are doled out. And no one has a name in this world. They’re all known by their job title, hence Goblin Slayer, Priestess, High Elf Archer, Dwarf Shaman, Guild Girl and so on. 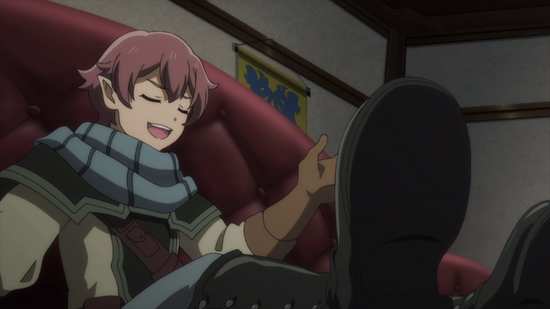 The first episode does suggest that the show will go in a dark and twisted direction, although the writing is on the wall when only the Priestess is introduced by name/profession, while the other three are left nameless. Newly qualified adventurers, they think that taking on some goblins will be a quick way to get their reputations growing, only it turns out that goblins are a lot more cunning and nasty then they expect. The other three are either murdered, brutalised or both, and Priestess is about to be the next victim, when Goblin Slayer makes his entrance and rescues her. But after that initial, unexpected nasty note to the show, it does seem as if it develops in the way I expected, playing heavily on those D&D gaming tropes. 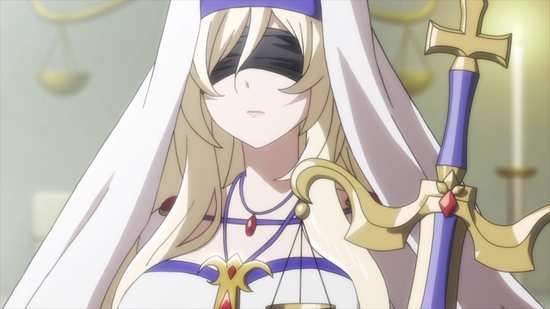 That is deceptive though, and really just the surface of the show. As the story unfolds, it begins to develop the characters, and it just gets better and better until the climax. In this clichéd world, Goblin Slayer is the odd one out, an adventurer that doesn’t like adventure, who is in it only to kill these low ranked creatures, goblins, and whose single-minded pursuit of his self-appointed mission invites odd glances and ridicule. He’s a man of few words, a man who you rarely see outside his armour, and who you never see the face of, and a man who has honed his skill to silver-ranked precision. Silver is the highest rank that active adventurers can achieve, and is the cause of many of those odd glances, the idea that anyone can get a silver rank just by killing goblins. It’s hard for people to believe that goblins and their ilk can prove a worthy enough challenge. 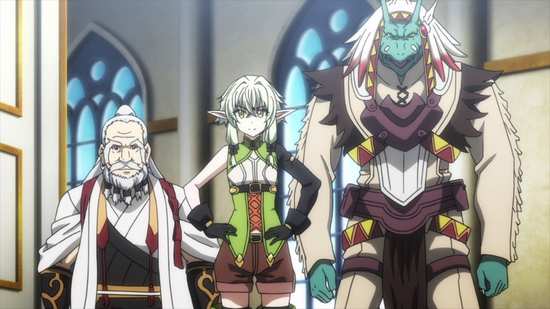 It’s when we learn of his back story during the early episodes that we see that he has a motivation to fight goblins that goes beyond any desire for status or reward. With Priestess learning of this reason first-hand when she only survives her first quest thanks to Goblin Slayer, she chooses to adventure with him from that point, learning from him, and gradually improving her own skills. Not long after, they are recruited by three unlikely adventurers to go on a serious goblin hunt. A big battle is in the offing against the Demon Lord, something all self-respecting adventurers want in on, but that means that the dark lord’s minions, such as the goblins are free to run riot and prey on innocent villagers. The High Elf Archer, Lizard Priest, and Dwarf Shaman want Goblin Slayer’s expertise to deal with a nest of goblins, and so the party grows. 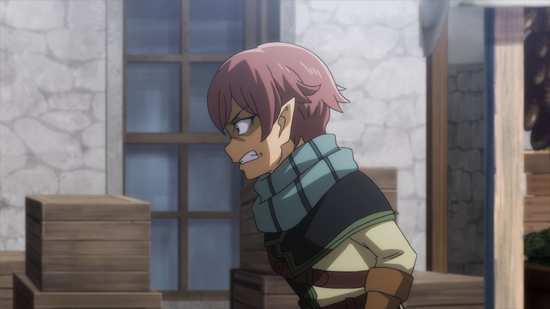 For someone like Goblin Slayer, who has always fought alone, it necessitates a shift in thinking, having to work with others, and being able to deal with bigger threats as a result. He starts to lose his detachment, becomes more human for want of a better word, although he’s never more than reticent when it comes to conversation. This, and the growing realisation of the threat that the goblins pose make Goblin Slayer less of a figure of ridicule among his peers, something which has greater import as the series progresses. 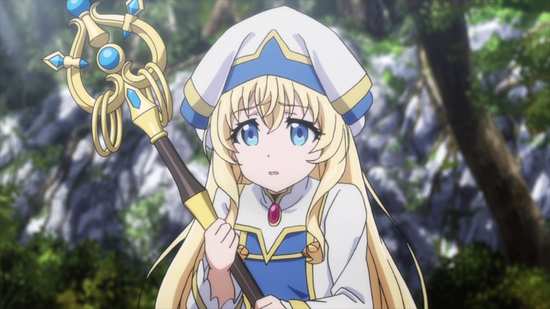 The structure of the show really helps, interspersing quests with episodes of downtime, so you get to see the characters interacting while they relax, as well as in the heat of battle. It may play with classic RPG tropes, but this is a story that has its strength in character development, where the consequences of past events shape the characters, so much so that it is easy to invest in them and the challenges they face. I was pleasantly surprised to find that Goblin Slayer is a lot more than I expected; a deft blend of action, character, drama, and even the odd moment of comedy. The story reaches a natural stopping point in the series, but it does end on a note that promises even more. The Goblin Slayer movie, Goblin’s Crown comes out at the start of 2020 in Japan. Hopefully it will make its way around the world as well.