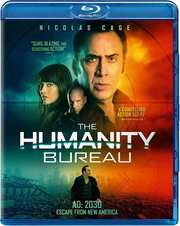 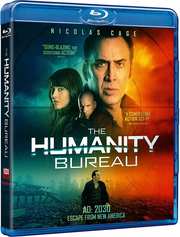 What happened to Nicolas Cage? There was a time when he was a hot, must see actor, headlining blockbuster movies like The Rock, Face/Off and Con-Air, and doing quirky, creative fare like Adaptation. The last time he made a live action movie that I’d heard of was the Ghost Rider sequel, and other than voice actor work in the Into the Spider-verse movie, I don’t think he’s made a major studio film in years. Certainly the films that he has made in the last five or six years all tend to wind up on labels like eOne, Entertainment in Video, Image Films, 101 Films, the companies that release the movie that studios like Fox, Paramount and Universal leave behind. And these discs can, after 12 months be found on the £2 shelf in Poundland, which is where I found The Humanity Bureau, a post apocalyptic dystopian sci-fi. Not too many of those to the pound...

Climate change, economic catastrophe, famine, mass migration, and war; the world of 2030 is not a pleasant place to live. The USA has increased its isolation, walled up its cities, and sealed its borders. Citizens are expected to contribute more to society than they consume, and it falls to the Humanity Bureau to judge those who fail to contribute and deport them to the New Eden settlement, where life will be easier for them. Only no one who’s gone to New Eden has ever been heard from again.

Noah Kross is an agent for the Humanity Bureau, taking his life into his hands whenever he ventures into the lawless zones outside the city when he has to deal with his clients. It’s when he encounters a single parent family, Rachel Weller and her son Lucas who have been deemed a burden on society that he begins to question the system.

The Humanity Bureau gets a 2.35:1 widescreen 1080i 50Hz transfer with a PCM 2.0 Stereo English soundtrack with optional subtitles. Normally I’d be raising a right royal whinge about a film presented in 1080i 50Hz, effectively the HD equivalent of PAL, but in this case, the 4% faster playback means that the film is shorter; a bonus. The image is clear and sharp, and while the case art and the menu screen suggest serious orange and teal, the colour grading on the film is a little more subtle than that. Detail levels are good, but the budget does tell in terms of sets and locations (a whole lot of incomplete building sites), although the exteriors are impressive. The special effects, especially the driving scenes are poor. The dialogue is clear, and the action does what it needs to do pretty well, given the stereo format.

You get one disc in a BD Amaray case which boots to an animated menu. The sole extra on the disc is the Behind the Scenes featurette, which lasts 14:14 (1080i 60Hz). In it the cast and crew are interviewed.

The most interesting thing about this film is how it was filmed, as related in the featurette. Although it’s not on this disc obviously, the film was made to be as immersive as possible, with an ultra widescreen format of around 7:1 for a wrap around cinema screen, as well as a totally VR version. You’ll probably never see the film that way, as the Barco Escape Company behind the screen format ceased business in 2018, and Humanity Bureau is one of only five films that made full use of the format.

The film itself is really quite forgettable, tending towards the rubbish. The performances are fine really; the characters hold the attention and are believable enough. It’s just that the whole premise of the film is complete and utter bunkum. There are countless films like this, a dystopian future with a warped society, a twisted reflection of our own. One man (it’s usually a man) from within the system will begin asking questions, spot the flaws, stop to think about an injustice, and pretty soon a whopping great revelation about society is unveiled. Planet of the Apes, Soylent Green, and Logan’s Run; films and stories have been built on this basic skeleton for countless years now. The problem with The Humanity Bureau is that its revelation, its jaw-dropping plot twist is so blindingly obvious, that you hardly need to read the blurb on the back of the case to figure it out, let alone watch the movie.

That leaves a lot of time to contemplate the film while waiting for the obvious shoe to drop, and the first thing that strikes is that its chronology just doesn’t make sense. It’s set in 2030, just 13 years after the film was made, and the world has completely fallen apart so much so that you think that the date must be wrong, that it must be further into the future. The characters will say things to confirm, this, throwaway lines like no-one has made cars for thirty years (except for the obviously brand new trucks that the villains drive), but then it will show evidence that is indeed in the near future, contradicting what the characters have said. And then you’ll realise that figuring out the film’s timeline is more interesting than the actual story. That even with its short 90-minute run time, the pace of the film is slow, stultifying and dull.

Much of the story is an extended chase sequence, a road trip as Noah attempts to take Rachel and Lucas to safety, having discovered the blindingly obvious. This should have been where the characters bonding and getting to know each other held the attention, but there’s not enough chemistry between them to distract from the achingly poor green-screen work during the driving sequences.

Then the film ends, and you get the chance to contemplate the film’s ridiculous plot-holes. Climate collapse and the associated ills have rendered the USA a barely liveable wasteland, unable to support its population to the point that those which are a burden to society have to be deported. There are no plants, no animals, but enough petrol to drive across country. Yet this is a country which has closed its borders so no one can leave. That is stupid. Those that are a burden on society are deported to New Eden, where they will have an easier life. No one sees through this lie, yet living in the rat-hole of post-apocalyptic America, there aren’t hordes of people knocking down the doors demanding to be deported to this easy life. It’s a film which has no internal logic.

The Humanity Bureau is dull, the story makes no sense yet is utterly predictable, the film’s aspirations far exceed its budget and production value, and I’ve come to believe that Nicolas Cage’s face is stuck.