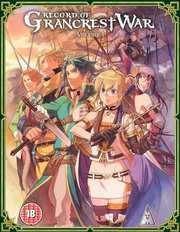 Aniplex US has come to be rather a curious publisher in my estimation. Certainly the exclusivity and the price points that they have for their releases raise eyebrows, but that’s less of a consideration when it’s companies like MVM who can release them for far more reasonable asking prices in the UK. They’re not short of big name titles like Sword Art Online, or the Monogatari franchise, but it’s for the lesser known titles, the also-rans that they release for which my interest is piqued. Sure, the whole range of quality is there when it comes to the overall show, and in terms of titles like Asterisk War, Granblue Fantasy, Katsugeki Touken Ranbu, they appear to have a predilection for fantasies. I always find however, with titles bearing that iconic Aniplex logo, that good or bad, the production value is never going to disappoint. MVM are bringing us yet another fantasy show from Aniplex, Record of Grancrest War, and I’m already looking forward to being impressed by the visuals. 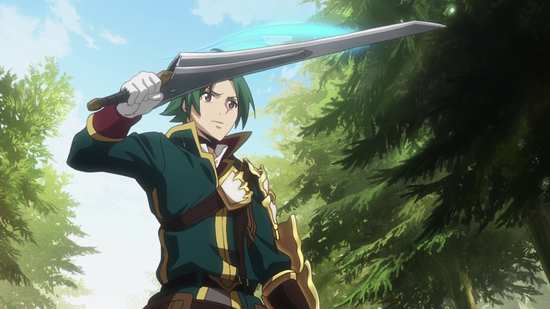 It was supposed to be an epic celebration, the sealing of a lasting peace through the marriage of the heirs to both the Union and the Alliance, and the creation of the Grancrest. But only the trainee mage Siluca Meletes sensed the Chaos Convergence, and even she was too late to prevent the disruption of the ceremony, the deaths of the leaders of the two states. 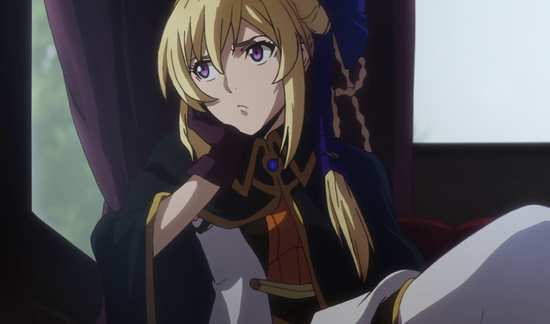 Now, the two nations are back at war, and the newly qualified mage Siluca is on her way to her new posting, a contract with Villar, a reputedly lustful Count who rules over Union territory. He only contracts with young beautiful women, and Siluca isn’t enthusiastic at the idea of offering her services to such a man. When her carriage is confronted by Alliance soldiers, she’s eager to let off some steam, but before she can act, an errant knight named Theo rides to her rescue. He’s inexperienced and naive, but he has a noble heart, and a pure vision. He’s the kind of person that Siluca would much rather contract with, someone easy to manipulate. She may be wrong in that assumption. So begins their adventure towards glory.

The first twelve episodes of Record of Grancrest War are presented across two Blu-rays from MVM.

Disc 2
7. The White Prince
8. The Congress Dances
9. The Black Princess
10. Blade of Betrayal
11. The Fall of Castle Unicorn
12. A Treaty Formed 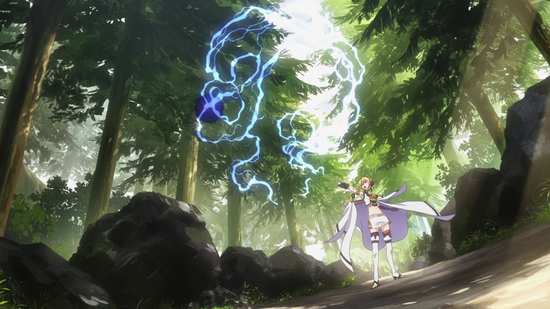 Record of Grancrest War gets a 1.78:1 widescreen 1080p transfer across two discs. The image is clear and sharp, colours are strong and consistent, and the transfer is unmarred by visible compression and aliasing. About the only issue might be a smidge of digital banding, but it’s hardly significant. The animation is smooth, and the HD transfer makes the most of the detail. This is a rather generic fantasy world, although it does dwell in more than one historical era when it comes to its inspirations. The character designs are well thought out and appealing. But as so often happens with these historical fantasy anime, massive battle scenes look decidedly CGI, and this is one of those shows where they don’t know how to animate horses. 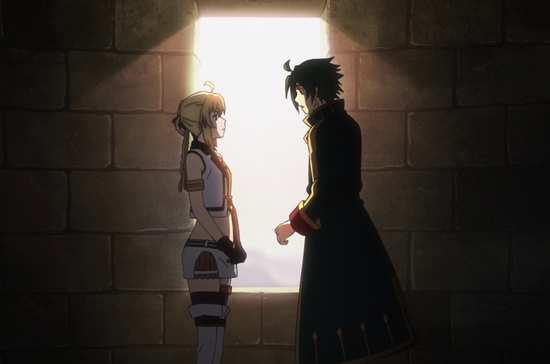 You have the choice between PCM 2.0 Stereo English and Japanese with translated subtitles and a signs only track. I went with, and was happy with the Japanese audio for the show. The actors give performances that fit their characters, and the action sequences come across robustly on the stereo format. The music drives the pace of the show, and reflects the emotion without become obtrusive. The subtitles are timed accurately and are free of typos. There are no lyric translations for the theme songs however. 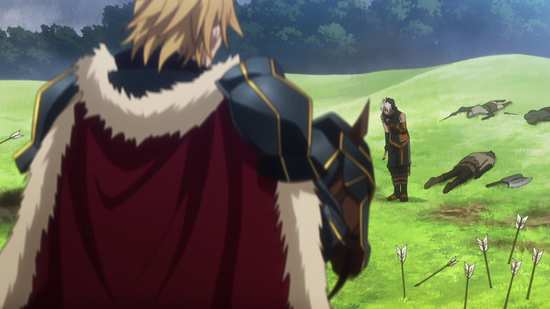 The discs show their content with static menus. These discs have been localised for Region B by Madman Entertainment.

The extras are all on disc 2, and amount to the textless credits, 9:12 of Web Previews for the episodes, and trailers for Ajin Demi-Human S1, Attack on Titan S2, Occultic;Nine, and School-Live! 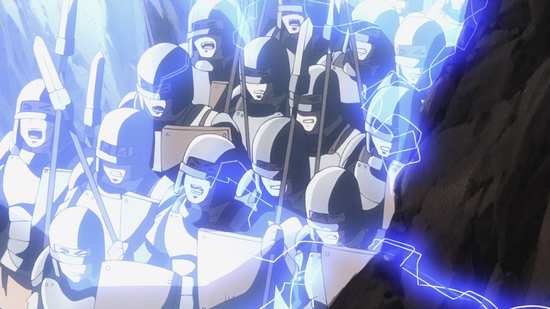 You can’t take a step through the anime world without tripping over some fantasy title or another. Separate from the ‘lost in another world’ isekai genre, these shows offer a little historical fantasy without requiring a protagonist from our world putting on a VR headset, or ignominiously reincarnating. At one time, you could have counted such shows on the finger of one finger... Berserk, but now the shows that feature protagonists battling heroically to regain, or conquer some land, manifest their destiny are all over the place. You have shows like the Heroic Legend of Arslan, which is practically archetypal, you have shows like Yona of the Dawn, Snow White with the Red Hair, Maoyu, Granblue Fantasy, Grimoire of Zero, Lord Marksman and Vanadis... For a show to make an impression in this crowded genre, it has to be something really special. Record of Grancrest War isn’t that show. 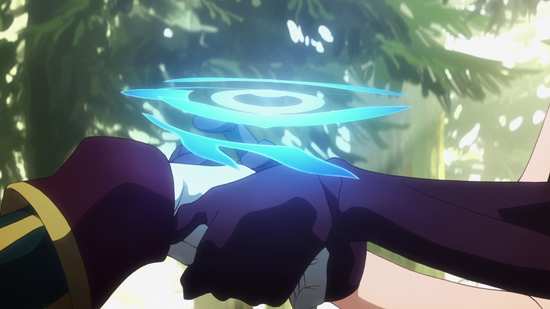 It’s set in a melange of history, with Knights in plate armour, relaxing in Regency era banquets, swords clash with gunpowder projectile weapons, and you get the magical fantasy elements as well. There are two feudal nations in conflict, the Alliance and the Union. At the start of the show, this conflict is about to end, as Alexis and Marrine, the heirs of these nations are to marry. But Chaos interrupts the wedding, the respective leaders are slain, and the status quo resumes, now with the heirs ascending to the thrones, bittersweet at their lost love, and now beholden to the states over which they rule. The marriage should have created the Grancrest, and banished Chaos once and for all, but once again, the lesser crests hold sway. 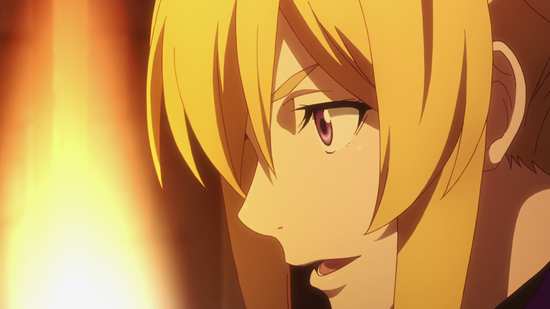 Basically anyone with a position of leadership, or leadership potential has a crest, a glowing form above their wrist that appears when they exercise or pass on their power. The higher up the food chain the Lord or the Knight is, the more ornate the crest. These leaders contract with Mages to enhance their abilities and help them up the ladder. At the start of the show, the Mage Siluca Meletes encounters a hero, Theo Cornaro. He’s a rare warrior who earned his crest fighting demons, instead of by inheriting it, or buying his way into power. Given the alternative, Siluca decides to contract with Theo, and help him on his quest to free his homeland of Sistina from corrupt rulers. To gain the power to do this, Theo needs a reputation that makes him worthy, and Siluca begins by helping him establish a fiefdom for himself, and expanding his influence. But caught in the middle of the Union and the Alliance, it’s a dangerous game that they play.

It sounds like a great premise, but Record of Grancrest War really is all over the place, at least in this first half of the show. The first few episodes follow Theo and Siluca’s meeting, and their adventures together from that point, as they establish Theo as a Lord, and he starts making waves in his region. Eventually he metaphorically gets too big for his boots, and accepts a change in circumstances to stay in the game, in effect swearing fealty to the Count Villar who is in charge of the region, ruling over the local Lords. At this point, the story shifts to Villar, and Theo becomes something of a side player in his own story. The characters that we encountered in the first four episodes are almost forgotten. There’s a non sequitur of an episode about vampires and werewolves, just so Theo can get a couple of werewolf bodyguards it seems. 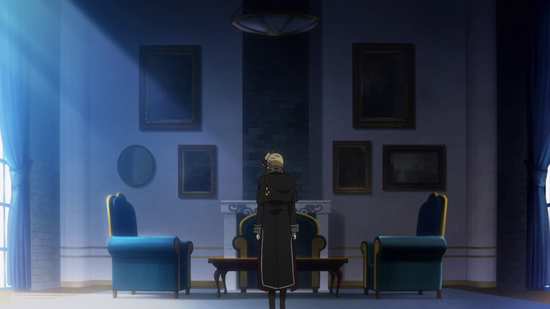 There’s a big Union gathering for Villar to attend, Theo and Siluca tag along as retainers. We get an episode of Alexis and Marrine’s love story, we meet a scheming prince named Milza who’s trying to ally his nation with Villar, and is looking for someone with the spirit of a conqueror. Then the focus shifts to Marrine, who is mourning her lost love, and deciding to unite the lands through force, if she can’t do it through marriage. The focus of the story is always shifting, and you never really stick with a narrative arc long enough to get to know or invest in the characters, not even the central pairing of Siluca and Theo. 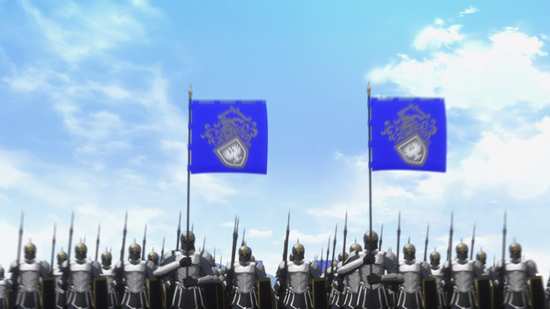 The tone of the show is inconstant as well. What starts off as a slightly comedic comedy adventure, with the occasional moments of light romance, takes a turn for the dark towards the end of this collection, which makes it feel like a different show. The battle sequences get more and more gory and brutal, and there’s a moment between Marrine and Milza that made me throw up a little in my mouth. What started off as something more akin to Maoyu, clearly wants to be Game of Thrones by the midway point. 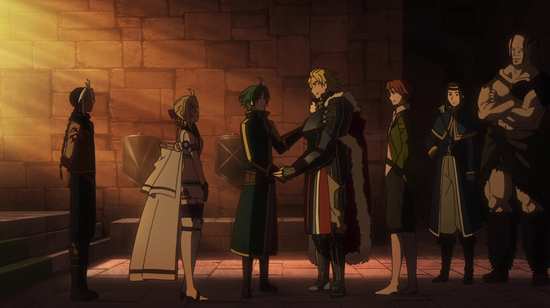 Having said all of that, there is a compelling story at the heart of Record of Grancrest War. If only I was able to invest in the characters, it would make the complex narrative, the grand, theatrical tale of kings and lords have more weight. As it is, my interest in the scheming and the politicking, the baits and the double crosses, the back-stabbing and sex, really is just academic. I may not care too much about the characters, but I do want to see how the story pans out. Hopefully in Part 2 of Record of Grancrest War, the writers and creators will manage to draw all these disparate plot threads together, and weave a narrative tapestry from them.