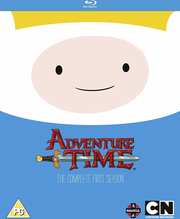 If there is one thing that is daunting to me as a reviewer, it’s volume. Just the amount of stuff that demands my attention, and it’s always worse as the year comes to an end, as the Christmas shopping spree beckons, and as distributors decide that this would be the best time to release the anthologies and boxsets, collecting multiple seasons of TV shows, the works of acclaimed directors, the performances of beloved actors. All of a sudden, there are ten discs in your in-tray, and less than a week to churn out a review. Sometimes it’s best just to say no, just put some money aside for that boxset, and watch it at your own pace, when you have time to do justice to a review.

I couldn’t say no to Manga Entertainment this year though. They may have been purchased by Funimation, but they are still doing their own thing in the UK, releasing the odd Viz title like Boruto, and most notably, devoting much of late 2019 onwards to Cartoon Network properties, titles that have been released by Warners and Shout Factory in the US. I am so out of touch with Western animation, that my touchstones are still The Simpsons and Futurama. So this seemed the best opportunity to see what modern US animation looks like. This year, Manga Entertainment are releasing the first five seasons of Adventure Time. That didn’t seem too daunting, until I realised that seasons 1-4 all come out on the same day. I put the first check disc into my player, and found 26 episodes plus extras on one disc, over 5 hours worth, and it turns out that all of the seasons except season five onwards are the same (season 5 has 52 episodes!) I doubt I’ll make the release date with these reviews. Best just to be systematic and work my way through... 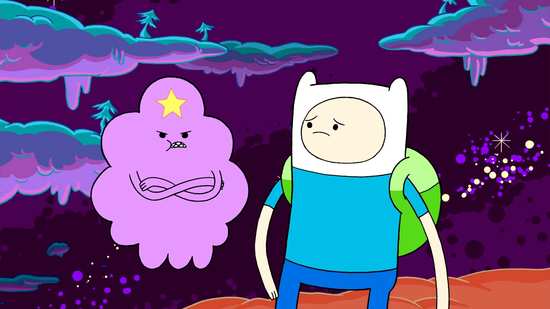 Finn is a human boy, and Jake is his best friend, a shape-shifting dog. Together they have lots of adventures in a magical post-apocalyptic world, with friends like Princess Bubblegum of the Candy Kingdom, Lumpy Space Princess of Lumpy Space, Tree Trunks, the pygmy elephant, and Lady Rainicorn, dodging danger from the Ice King, Marceline the Vampire Teen, and Ricardio the Heart Guy...

There are 26 episodes on this Season 1 Blu-ray disc from Manga Entertainment. 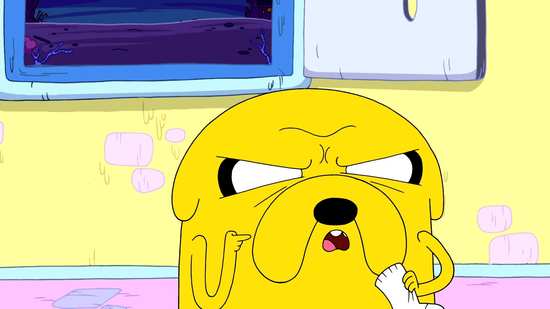 The picture is presented in 1.78:1 widescreen 1080p. With five hours of video and over an hour of extras, you’d be forgiven for expecting issues, even on a dual layer Blu-ray. But with this being a rather simplistic animation, all flat colours, bold lines and simple motion, I suspect that compression isn’t that much of an issue on this disc. Certainly I didn’t notice anything as crass as pixellation or aliasing, or even digital banding. The only niggle might be some jerky pans and scrolls at some points, notably so in episode 10. As mentioned, this is a simple animation, with memorable character designs that are never really complex. This looks like an animation for young children, although it only looks that way. 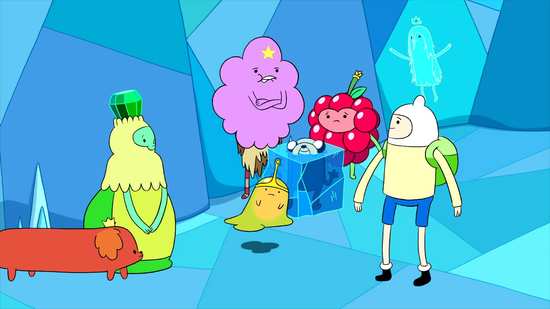 They certainly saved some space with the audio, offering a serviceable but lossy DD 2.0 English track with optional English subtitles. The music is adequate, but unremarkable, while the actors are suited to the characters. There are some surprisingly big names in the guest cast worth keeping an ear out for, most obviously George Takei, who also contributes to a commentary on this disc. 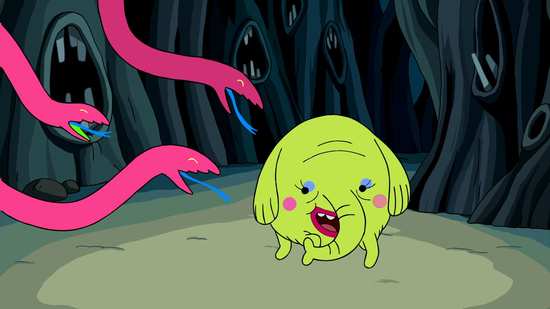 The disc autoplays with trailers for the Adventure Time DVDs and Cartoon Network broadcasts, The Regular Show, and The Amazing World of Gumball The Mystery before booting to a static menu.

There are commentaries for four of the episodes. 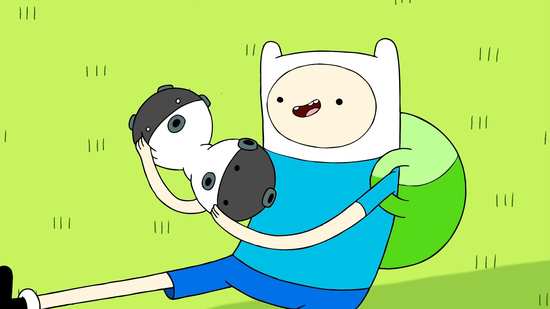 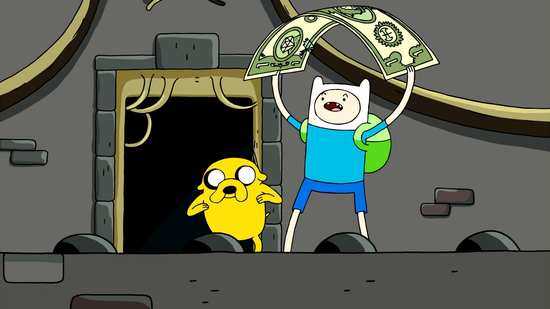 There are four Animatics with commentary on the disc, with a total runtime of 48:41.

Finally there are the 6:01 of Video Extras, three in total
Music Video
Finndemonium
The Wand 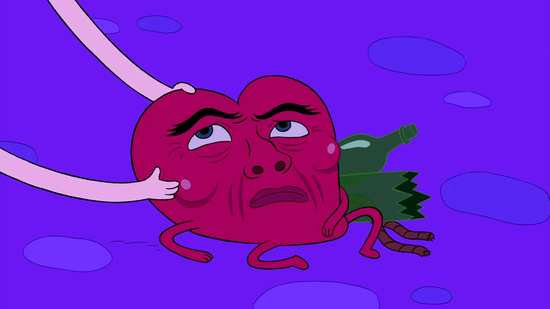 Adventure Time has ten seasons under its belt, and some of those twice as long as this first season, and in 2019, Manga Entertainment are bringing us the first five. 1-4 are released on the same day, and the double length Season 5 a month later, along with a Season 1-5 collection. Having watched these first 26 episodes of the first season, I’m a little hard pressed to explain its longevity. I can best describe Adventure Time as a kids cartoon for adults who don’t want to grow up. It’s got a fairy tale set-up, colourful, child friendly characters, and the adventures that they go on are superficially simplistic and juvenile. Yet the humour most certainly isn’t aimed at a child demographic, with plenty of innuendo and dark comedy, the kind of silliness and occasional satire that more mature audiences will get. 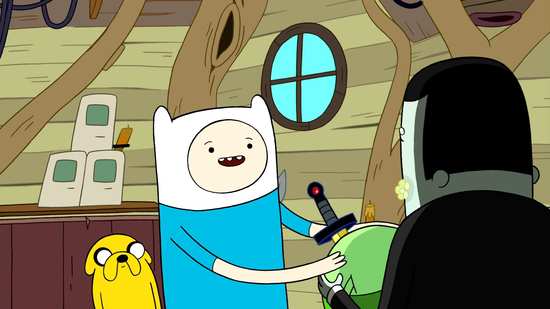 I suspect that the entertainment in this show might come from repetition, as in a sketch show comedy. Familiarity with its style, its characters and how they develop over the run will hopefully increase the comic potential. Certainly I noticed that in the Ice King, who by the end of this series had developed enough for his character to be subverted, and the same was true to a lesser degree for Princess Bubblegum. But this is just the first season of 10, so I expect it will take a little longer for the show to bed in. 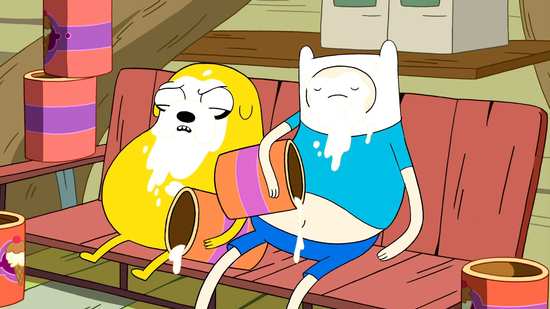 Jake the dog and Finn the human go on adventures each week, and just like most kid’s animation, each story is presented as an animated parable of sorts, although in this show the message is usually sardonic, a twist on expectations that appeals to the older demographic. In one story, Jake and Finn meet their hero, an adventurer named Billy, but his message to them causes them to re-evaluate their violent approach to adventuring. In another, Princess Bubblegum demands that they capture the Ice King so that she can torment him, which causes them to wonder if they’re actually the bad guys. One time, saving a village from a scary ogre actually harms the village more than if they had just left things alone. There’s often a cynical irony to the way the stories play out that is easy to appreciate. And when characters like Lady Rainicorn speak Korean, it’s obvious where the humour is aimed. 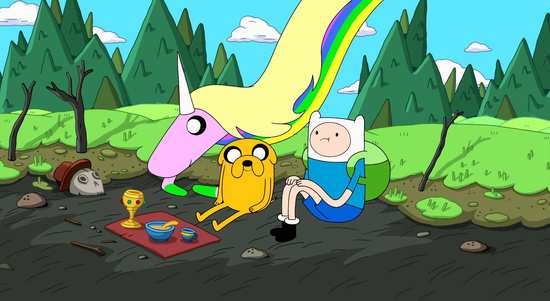 What’s frustrating to me at this point is that I can’t quite reconcile the simplistic, child friendly animation, and the similarly simplistic story telling style with the cynicism and adult twist to the stories and the characters. You get an idea of just how dark the show can get early on with the Tree Trunks episode. Tree Trunks is a feeble and very naive pygmy elephant who wants to get a very special apple for an apple pie she’s baking. Together with Finn and Jake, they adventure into the magical woods looking for the apple, with Finn and Jake getting increasingly exasperated as she keeps blundering into danger. She eventually finds the apple, takes a bite, and explodes. End of episode. That’s not the kind of story you’d a show a toddler who would most appreciate the bright and peppy animation style. 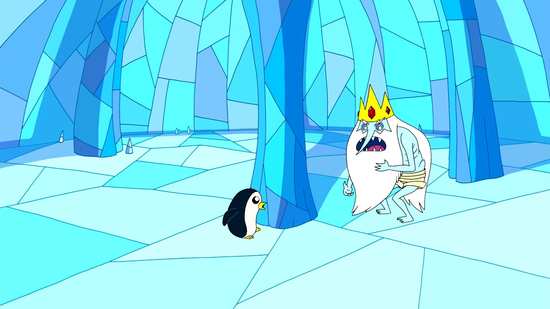 I have four more seasons of Adventure Time to take a look at, and hopefully something will click, and make me more simpatico with the show. Adventure Time’s first season is sporadically entertaining though, and becomes more so the further you get into it. It’s never boring, and you certainly get treated well when it comes to the episode count and the extra features on this disc. Adventure Time is on Now TV and Amazon Prime if you want to stream a few episodes to make up your mind before shelling out for the Blu-rays.