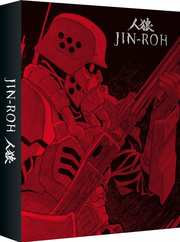 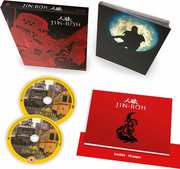 Ever since I belatedly got on the Blu-ray bandwagon, Jin-roh has been the one anime film missing from that format, the one film that most deserved a high definition presentation. It was one of the last traditionally made anime features, cel and paint instead of digitally created. Just like any film, the better the scan, the better the results. Digital animations on the other hand are limited by the resolution of the source material. You could conceivably get better results from films like Akira, Ghost in the Shell, and Jin-Roh with 4k scans and higher, but let’s at least get the Blu-rays first. 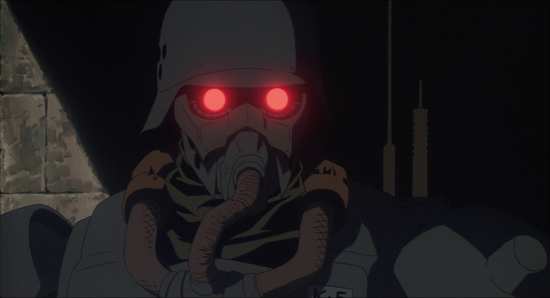 Jin-Roh really has been a long time coming, even though it had a US Blu-ray release in 2015 from Discotek. That was Region A locked, otherwise I would have succumbed to temptation and imported long before. Speaking of Ghost in the Shell, Jin-Roh comes from the mind of Mamoru Oshii, director of that film. Oshii is a prolific creator, juggling many roles, so when it came to adapting his manga creation Kerberos Panzer Cops into an anime feature, the directorial reins fell to Hiroyuki Okiura. Okiura wanted to create his own vision of Oshii’s universe, so he asked for a screenplay with a romantic thread running through it. Mamoru Oshii gave him Little Red Riding Hood, although this is Little Red Riding Hood, as you have never seen it before. Finally, the Jin-Roh Blu-ray is here in the UK thanks to Anime Limited, and I get to replace that creaky old DVD from Optimum Releasing. Actually there’s also good reason to double dip if you’re still only spinning SD discs. 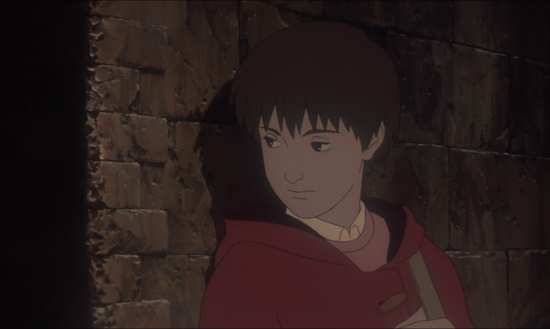 It’s an alternate world where Japan lost the Second World War but was reconstructed as a totalitarian state. It took a decade, but Japan slowly recovered and established itself as an economic power, but that process of re-growth was painful and threw up plenty of opposition against the government, pro-democracy groups that resorted to violence when their voices weren’t heard. Japan was forbidden from creating a military under the terms of the armistice, but they could, and did create a paramilitary police force dedicated to opposing the terrorists, and the Capital Police as they are known, proved to be very effective. So much so that the opposition groups had to retreat underground and reorganise. Now there is only the one group, The Sect, whose methods are far more insidious, using small girls as couriers to carry arms and explosives from one cell to another. They are known as Little Red Riding Hoods. But the Capital Police has their own Special Unit to combat the Sect, and within that Unit is rumoured to be a rogue organisation whose methods make figures on both sides blanch; they comprise the infamous Wolf Brigade. 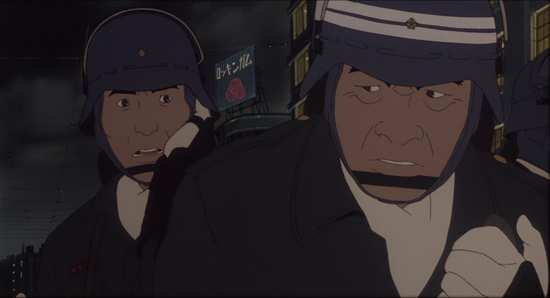 A rowdy political demonstration turns lethal when infiltrated by members of The Sect, but the Special Unit are ready to pursue the terrorists underground and hunt them down, bringing their full firepower down without mercy. That’s except for Kazuki Fuse, who when confronted by the final target, a young girl armed with a suicide bomb, freezes instead of shooting. It’s only because of his armour that he is protected, but he isn’t protected from the wrath of his superiors, who reassign him to training. Haunted by the face of the girl he couldn’t kill, he finds it hard to come to terms with what happened, and he even visits her grave. It’s there that he meets her sister, who is surprisingly forgiving of him. Besides, as she says, he’s the one who didn’t shoot. As Kazuki spends more time with her, he starts questioning himself more and more. But there is more to this girl than meets the eye; while Kazuki’s failure in the tunnels is just the political leverage the regular police requires, to act against the independent Capital Police. 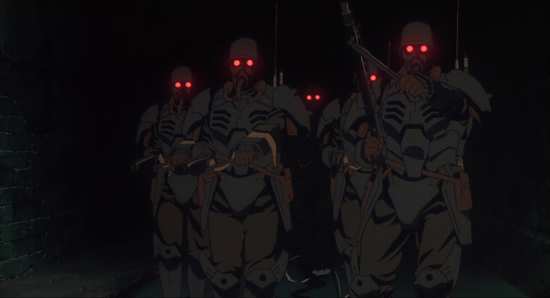 What a difference a new transfer makes. Jin-Roh gets a 1.85:1 widescreen 1080p presentation on the Blu-ray which is a world away from the Optimum DVD release. The image is clear and sharp, detail levels are excellent, and the animation is smooth. This is a realistic depiction of a world, both in terms of character designs and especially the world design, and the film gets a subdued autumnal palette as a result. The transfer is filmic, with a nice level of grain, but is free of print damage or signs of age. There is a slight wobble, only really noticeable during the credits sequences. The one problem is that shadow detail and contrast in darker scenes isn’t that great, but that is the nature of the beast when it comes to these traditional animations. The image on the DVD disc that comes with this release is struck from the same transfer and is also a significant step up over the Optimum disc. 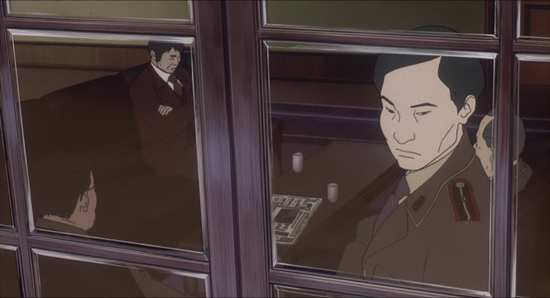 The Blu-ray offers you the options of DTS-HD MA 5.1 Surround English and Japanese as well as PCM 2.0 Stereo Japanese with optional translated subtitles and a signs only track. The subtitles are of the clear white variety, and look to be the same translation as on that Optimum release. The surround is excellent, immersing you in the film, making the most of the action sequences, and the ambience. The evocative music is certainly worth mentioning, reflective and melancholy in all the right measure. The subtitles are timed accurately and are free of typos. 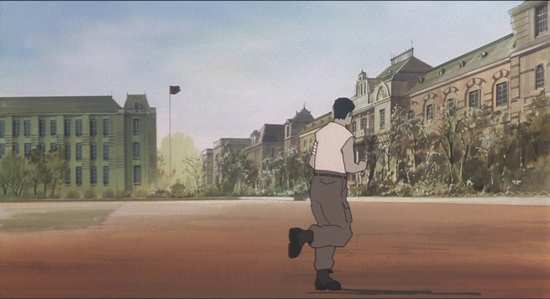 There is a standard DVD only release, but the Blu-ray comes in Collector’s Edition form, with the DVD, and a 48 page booklet as well. I haven’t seen the packaging or the physical extras to comment, but as the only extra missing from the Optimum disc is a rather poor Production Art Gallery, I hope the booklet can provide something better. 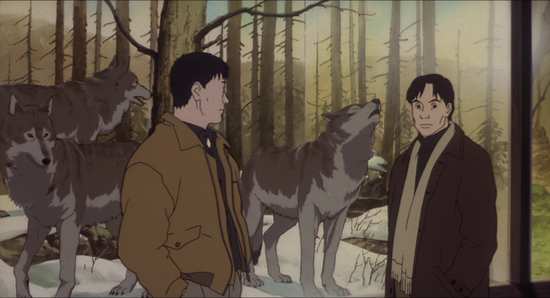 The Blu-ray disc presents the film with a static menu.

You get the Theatrical Trailer, the three TV Spots, and the US Release Trailer. There is a 5:16 English credit reel for the film. But the biggest contributions are the Interviews running to 38:39 played as one featurette. In it creator and screenwriter Mamoru Oshii, director Hiroyuki Okiura, composer Hajime Mizoguchi, and art director Hiromasa Ogura speak about their contributions to the film and more. 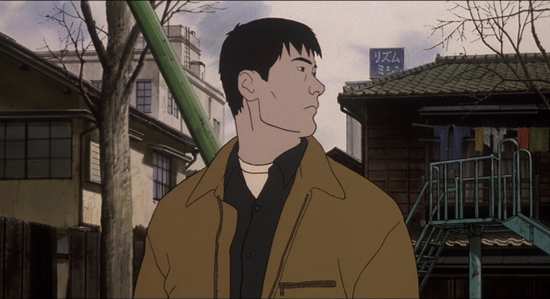 Having seen the DVD, it’s also well worth double-dipping on if you have the Optimum disc, as the previous windowboxed 1.85:1 anamorphic NTSC-PAL conversion has been updated to a full screen 1.85:1 anamorphic NTSC transfer, progressively encoded. You have the choice of DD 5.1 English and Japanese, and the only thing you might miss from the Optimum disc is the full bit-rate Japanese DTS track. 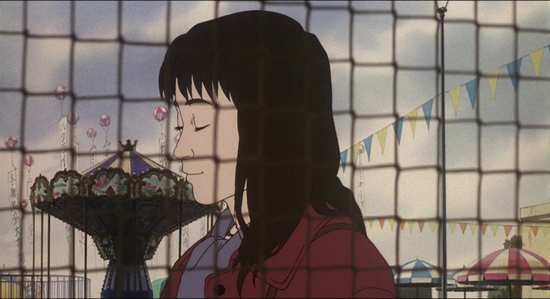 It’s a fairy tale, Jim, but not as we know it. That’s what I’d like to say, but perhaps it’s even more appropriate to mention that this isn’t exactly anime as you would know it either. Jin-Roh comes from a more thoughtful, considered place; it is very much an adult anime in the truest sense of the word. Not because of graphic content or profanity, but because the themes, the style, and the subject matter is aimed at an audience that likes a little more meat on their anime. That isn’t too surprising given that Jin-Roh comes from the imagination of Mamoru Oshii, who gave us the Ghost in the Shell features, and Sky Crawlers. What is surprising is that rather than lofty considerations of philosophy and definitions of the soul, Jin-Roh is very much about character motivations, about people, about interpersonal conflict and drama. This is blazingly intelligent, meaningful storytelling, coming from the same sort of place as films like Wings of Honneamise and Perfect Blue. You will need your brain in gear for this one. 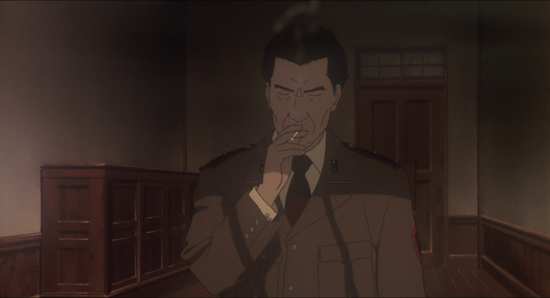 The story is about the Wolf and Little Red Riding Hood. Kazuki Fuse is the wolf, the paramilitary policeman from the government whose job it is to hunt down the terrorists and to kill them. The terrorists use young children to transfer weapons and explosives, the so-called Red Riding Hoods, on the off chance that a Wolf will hesitate before pulling the trigger. That’s exactly what happens when Kazuki is confronted with a girl carrying a bomb. He hesitates, and she detonates the bomb, killing herself and causing significant damage. It’s a hesitation that gets Kazuki reprimanded, but understandably he becomes haunted by the image of that girl, reducing his effectiveness as a killer. You can’t get away from the definition of humanity in a Mamoru Oshii story, and the question of how much humanity remains in a government paid killer, and just what drives terrorists to such desperate acts is never far from the focus of the film. 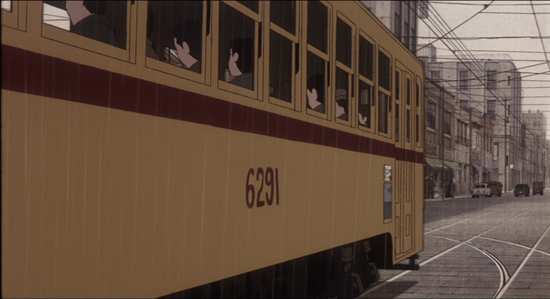 But that is added to when Kazuki meets the girl’s sister, and starts seeing the world from a different perspective. He’s suffering from post traumatic stress, while she’s grieving for her sister, while unable to come to terms with her life choices, they are both in their own ways ostracised from their groups, and seem to find some understanding with each other. If only if it were that simple. There’s more to the sister than meets the eye, and it becomes a question of whether the predator can actually lie down with the prey. With Kazuki’s superiors using his failure as an excuse to restructure the Capital Police, and political manoeuvring about that taking on a very underhand tone, what seems like a rather reflective and melancholy character piece slowly picks up momentum in its narrative, increases in tension and pace, and becomes a suspenseful political thriller. It builds to a climax where that question about predator and prey is answered in an absolutely jaw-dropping fashion. 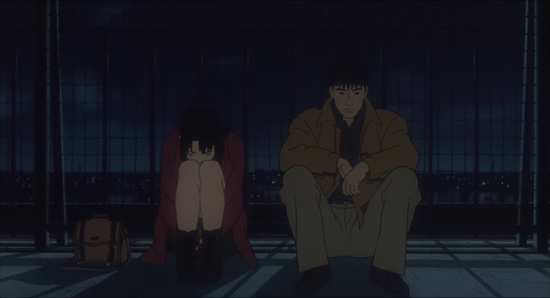 You hear about shows and films that transcend their genre all the time, it’s fairly commonplace for something that seems niche to suddenly appeal to a broader audience. It’s rare indeed for something to transcend its medium, and I have only seen once or twice anime that can be said to be more than just simple animations. Jin-Roh is one such film. It’s such a gripping, well told story, with compelling and rounded characterisations, that it’s almost inevitable that the viewer will forget that it’s an animation at all. Its slow, measured, and understated storytelling builds to a narrative peak that rivals the best thrillers, and it’s about time that we in the UK can appreciate its charms in high definition. Very much recommended.