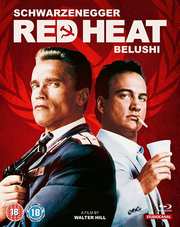 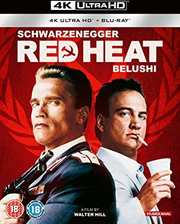 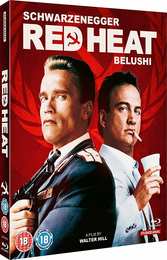 Sometimes movies just get me on the wrong day. I’m not in the right mood, or I’m just not comfortable, and I react to a film poorly that I otherwise would really appreciate. That happened to me with Buckaroo Banzai, a film which I enjoyed the first time I saw it, and enjoyed the last time I saw it, but the second time, I just didn’t get it. I need to be in the right frame of mind. Now I’m an Arnie fan, at least I am a fan of the action movies that Arnold Schwarzenegger made in the eighties and early nineties, which should make Red Heat one of my go to movies for a classic Arnie fix. But the last time I saw the film, when I reviewed the Optimum DVD for this site, it didn’t click with me the way it should have. Every film deserves a second chance, and now that Studiocanal are releasing it in 4k Ultra High Definition, it means that the new transfer has resulted in a new Blu-ray as well, and I can take the opportunity to give the film a second chance. 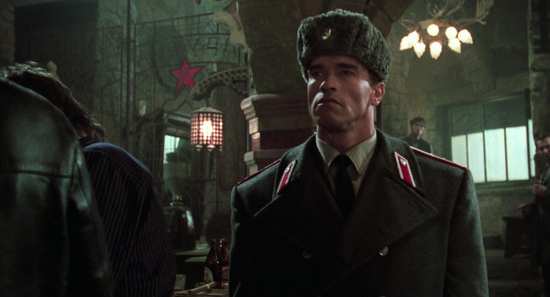 Ivan Danko is a cop in Russia, fighting the influx of drugs that is rapidly overwhelming his society. One of the figures behind it is Viktor Rosta, but an attempt to arrest him goes wrong, Danko’s partner is killed, and Rosta escapes to America. There he plans to continue his enterprise, and begins setting up a deal with a Chicago gang, but he’s picked up for a traffic violation and quickly identified. Moscow wants him extradited, so they send Danko to collect Rosta. Only Rosta escapes from custody during the transfer, killing a local cop in the process. That cop’s partner, Art Ridzik is one of those maverick, loose cannon cops, and he takes the death of his friend personally. He’s been assigned to baby-sit Danko, who himself has been declared a lost cause by Moscow for letting Rosta escape. Now the two have to work together to recapture Rosta, and establish an East West détente in the process. 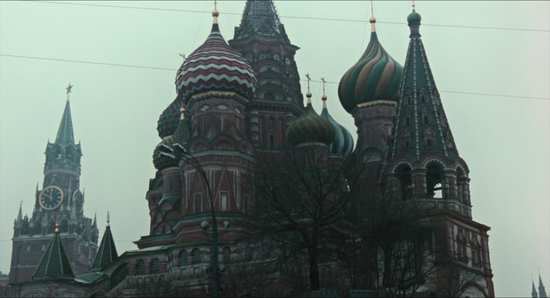 Red Heat isn’t the most colourful of films. You go from the depressing grey of Russia to the vibrant grey of Chicago, but this isn’t a film where you can praise the director of photography’s skill in selecting a colour palette or judiciously grading the print. But when it comes to 4k restorations, and the subsequent presentation on this Blu-ray, I have to say that this 1080p 1.85:1 widescreen transfer looks lush. The image is clear and sharp, detail levels are excellent, and the print is stable and clean (except for a slight wobble during the credit scrolls). The contrast is good, blacks aren’t crushed at any point, and whites aren’t blown. This is how you want the film to look. The skin tones are natural, and there is a subtle, but effective level of film grain, suggesting just the slightest hint of post-processing to make the most of the film in HD. 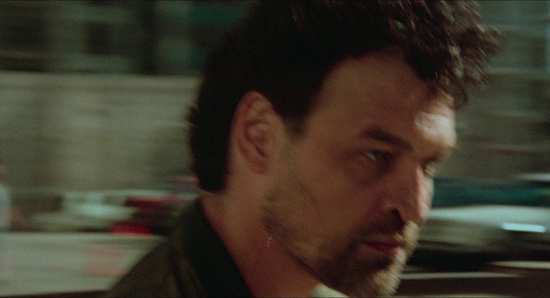 You have the choice between DTS-HD MA 5.1 Surround English and German, and 2.0 Stereo French with subtitles in those languages. The player will default to a player generated subtitle track to translate the Russian dialogue, so don’t switch off the subtitles completely unless you’re fluent. The first thing you’ll note are the meatiest of punches, which sound like a side of beef hitting concrete from 20 storeys up. The second thing you’ll notice is that the surround isn’t too lively, with the film presentation remaining mostly front focussed. That’s no surprise given the film’s theatrical stereo presentation back in 1988. James Horner provides a soundtrack that you’ll have heard in slightly altered form in films like Commando and 48 Hours. 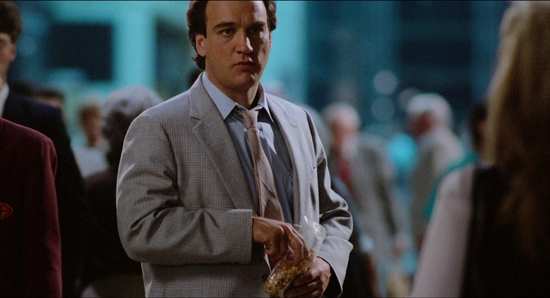 On insertion, the disc offers you the choice of English, German and French menus, although the content is the same for all territories. It then boots to an animated menu.

On the disc you will find the following extras. 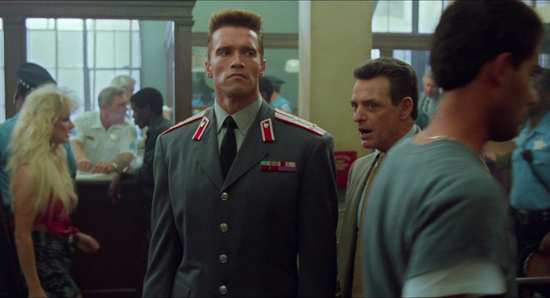 A Stunt Man For All Seasons is a tribute to Bennie Dobbins, which lasts 12:24. 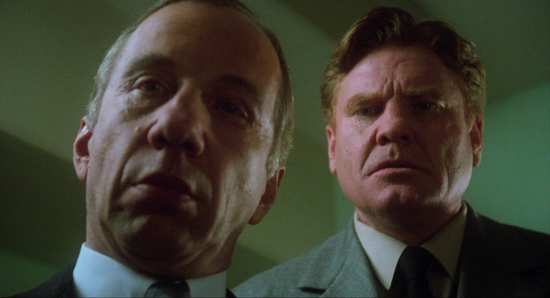 I’m Not a Russian But I Play One on TV lasts 5:11 and is an interview with Ed O’Ross who plays Viktor Rosta in the film.

Finally there is the theatrical trailer. 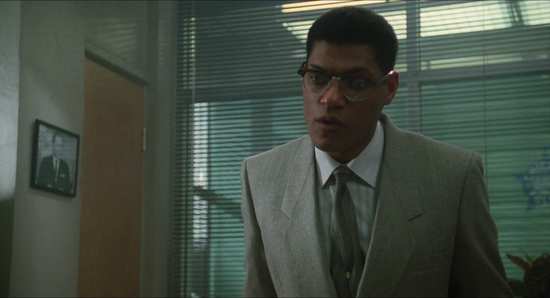 Red Heat still doesn’t work for me. In fact, I found it even more tedious this second time around. It just doesn’t work they way it should. You have a solid premise, a buddy cop movie with a cultural gap to bridge, and given that it was East and West, the US and Russia, Capitalism and Communism, that was a gap that should have oozed comedy potential. You have Jim Belushi and Arnold Schwarzenegger, again, comedy potential. With Walter Hill directing, who had nailed this formula with 48 Hours, Red Heat shouldn’t have just worked, it should have been the hit of the year. In the end it fell to Rush Hour to get this cross-cultural buddy cop magic right. 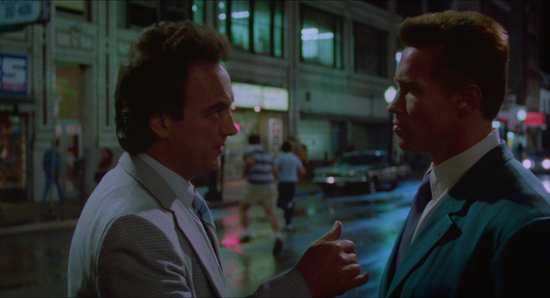 The biggest problem is that Belushi and Schwarzenegger have zero chemistry on film. Never has the observation that two people look as if they are in two different movies been more appropriate. Belushi just isn’t funny in Red Heat, his character Ridzik is loud, obnoxious, misogynistic and crass, but he isn’t funny with it, which might have made the character sympathetic at least. Ridzig doesn’t seem motivated in the film, reacting rather than acting, which given what happens to his partner makes no sense. Against this you have Arnie, who plays Ivan Danko as straight, slightly ironic, but not given to conversation. You might think this plays to Arnie’s strengths, but you want more irony, and you will miss the one-liners. 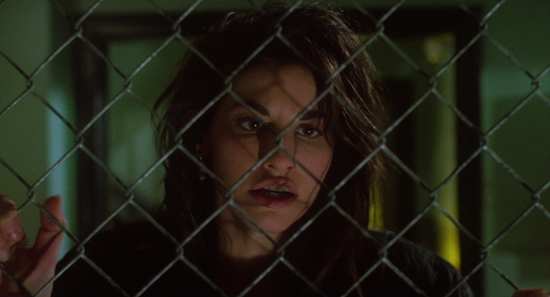 I know that this is what I said about the DVD back in the day, but my opinion of the film has actually lowered in the intervening years. Red Heat is all cliché and no heart. I do believe that it is my least favourite Arnie movie of that period. Raw Deal is a worse movie, but it is at least fun in the ‘so bad it’s good’ sort of way, but Red Heat has little to redeem it. It’s watchable enough as an action movie, although even the action seems woefully mundane and understated given what you expect from a Schwarzenegger film. The high point of the film is that half naked fistfight in a sauna, and it’s all downhill from there. But you can’t deny that Red Heat has never looked as good as it does on this Blu-ray. Presumably the UHD will be even better, although what HDR can do with all that grey is beyond me.