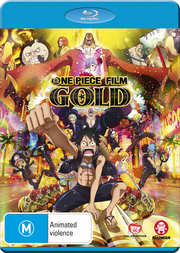 Review for One Piece Film: Gold

A little while ago, I had a bit of a whinge about One Piece, in particular the fact that we don’t get as much of it in the UK as we did when the series first kicked off. Manga Entertainment occasionally deign to drop the next instalment of the series, but that’s about it. At the time of writing, the last TV collection came out in January 2019, while the last movie was released here in 2015. The series is still ongoing, and they keep on releasing movies and TV specials as well. My need for more One Piece finally outstripped my patience, and I wound up importing One Piece Film: Gold along with the One Piece: Heart of Gold TV special that ties into it. When I watched the latter, I wound up disappointed with a clichéd, and by the numbers spin-off, which did nothing new, and kept the characters in their comfortable and familiar roles. That wasn’t what I needed. Now that I turn my attention to the theatrical feature, One Piece Film: Gold, I hope it does fill that need. 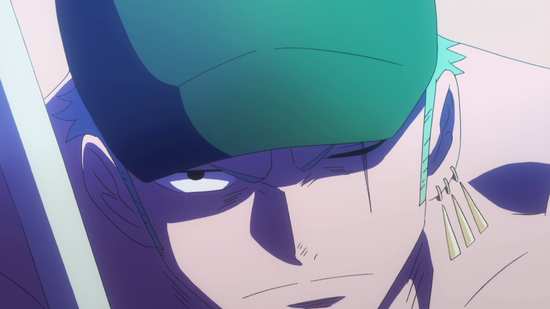 The Straw Hat Pirates and the Thousand Sunny arrive at Gran Tesoro, the largest ship in the ocean, practically the size of an island, and the whole thing a massive resort run by its owner Gild Tesoro. Tesoro ate the Gol-Gol fruit, and can control the precious metal itself. He’s collected as much gold as he can; his wealth elevates him above all in the world except the Celestials, and his Gran Tesoro resort operates under his own personal law. Luffy and his friends are looking forward to partaking of the resort’s facilities, and in particular, Nami’s eyes light up at the sight of the casino. And with the Straw Hats so famous, they’re being treated like VIPs, everything complementary, including millions of berries worth of casino chips. 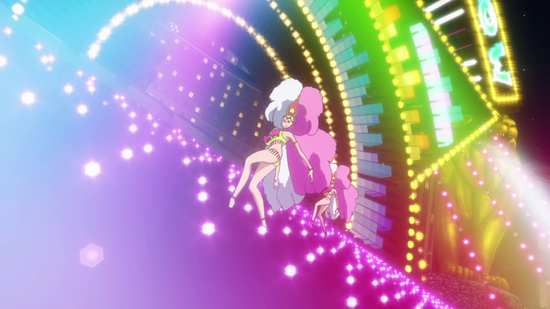 Only there’s no such thing as complementary casino chips. Tesoro has a standard operating procedure with pirates. Get them in his debt and then torment them into permanent servitude. The Straw Hats are set up, the initial easy wins, rubbed out by one obvious loss. When they try their usual technique of fighting their way out, Zoro is captured and encased in gold. Now the Straw Hats have until the next evening to come up with 320 million Berries or Zoro will be executed. Things look bleak, but then Nami runs into an old friend, a fellow thief named Carina, who betrayed Nami the last time they saw each other. Maybe this time she won’t sell Nami out... 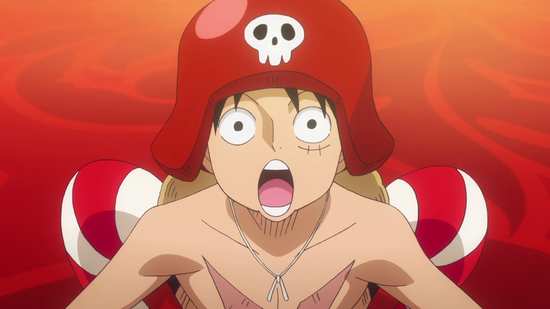 The theatrical presentation that One Piece Film: Gold gets elevates it far beyond the TV series, and indeed that TV special I reviewed. The 1.85:1 widescreen 1080p transfer is clear and sharp, with excellent detail, rich colours (plenty of gold), and smooth, detailed, and fluid animation. There’s no sign of compression, and I saw no banding either. The epic scope to the film really gives life to Gran Tesoro, and allows the animators’ imaginations to run riot. This is a film with amazing visuals, and some great action set pieces. 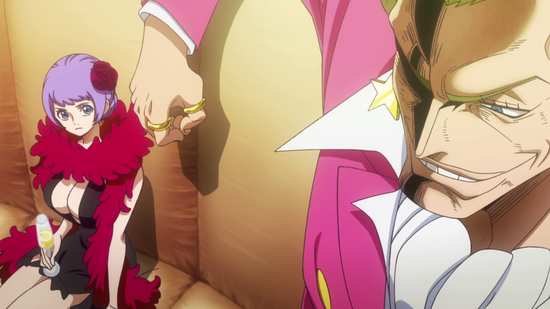 You have the choice between Dolby TrueHD 5.1 Surround English and Japanese, with optional translated subtitles and a signs only track. As always with One Piece, I stuck with the Japanese, and was very happy with the experience. The film is presented well, the action sequences and the music are expressed well through the surrounds, while the dialogue remains clear throughout. The subtitles are timed accurately and are free of typos. 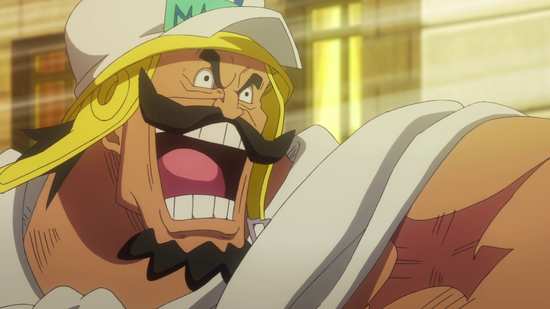 You get one disc in a BD Amaray case, and this time it looks as if Madman merely re-used the Funimation disc (switching it to Region B) without re-authoring. The inner sleeve of the case gets some nice character art. The disc boots to an animated menu, and the film is followed by a silent translated credit reel. 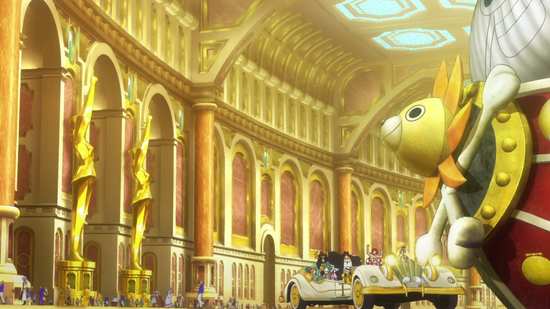 The sole extra on the disc is the Place Your Bets on the Straw Hats featurette, which lasts 28:06, and sees the English voice actors for the Straw Hat pirates (not including Patrick Seitz) split into two teams sat at a table, taking part in challenges. It’s as frivolous as the usual Funimation featurette. 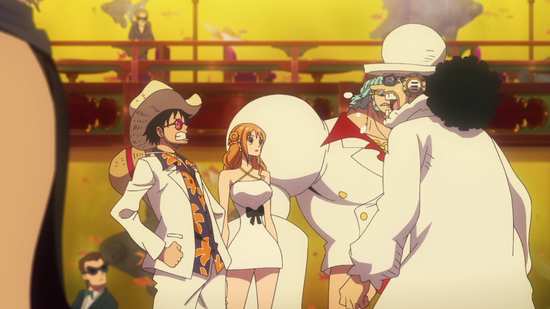 This is what I was looking for. Heart of Gold was a typical anime spin off from a Shonen Jump show. A guest character needs help, and also needs to find a sense of hope and optimism, and it’s the regular heroes that succeed. All shows that get multiple movie spin-offs indulge in this cliché, from Naruto to Bleach and indeed One Piece. After seeing variations on this story countless times, nothing can put me to sleep faster, and I was worried that One Piece Film: Gold would do the same. I needn’t have worried. 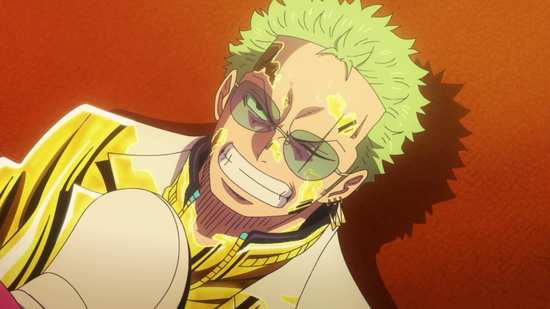 This film breaks out of its genre to do something new. One Piece Film: Gold is a heist movie. It’s the Ocean’s Eleven of the anime world, or you could call it Luffy’s Ten. The big rule of Gran Tesoro is that if you’re duped, you lose. Gild Tesoro sets up the Straw Hat pirates to lose, and he then gives them one chance to get out. It looks as if his powers trump that of Luffy and his friends. All he needs is gold to manipulate, and the entire resort is saturated in the stuff. New arrivals sail through a shower of gold dust, and that dust permeates their bodies, so they’re physically under the control of Tesoro. So when Luffy and his friends have to get 320 million Berries to rescue Zoro, and they can’t fight, their only option is to steal the money itself. 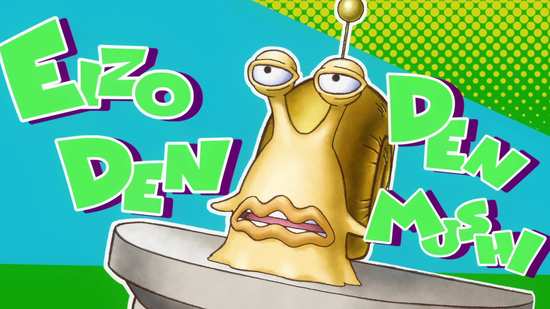 Tesoro is the richest man in the world, and he’s rumoured to have 500 billion Berries in a vault on the ship. That becomes Luffy’s target, to break into the vault, pay Tesoro off with his own cash. Naturally they’ll have to be discreet about it. It becomes a game of dupe and counter dupe, double-cross upon double-cross, which makes for an interesting and entertaining movie, delivering something outside the realm of the usual One Piece story. Of course to satisfy fans of the franchise, there has to be a big fight at the climax, with Devil Fruit powers pitted against each other, and seeing how far ahead this film is in the narrative, you’ll see abilities in the Straw Hats that haven’t yet been reached in the TV series. It might be a bit of a spoiler in that regard. 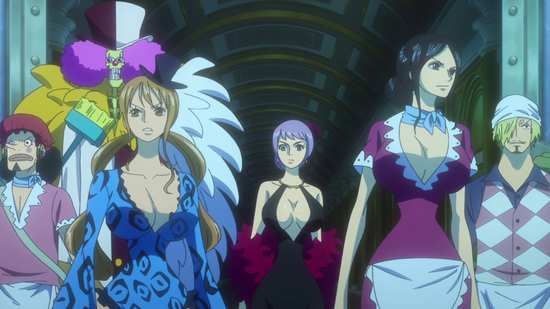 What I like best about this film is the added history that it gives Nami. It’s been established that she had a colourful childhood, and she was working as a thief when we first met her. This harks back to a time when she and Carina were friendly rivals, but it was a rivalry that ended badly. Now, Carina is working for Tesoro, but she claims that she’s casing his casinos for a chance to steal his money. With the arrival of the Straw Hats, and with Zoro taken hostage, it’s her chance to make good on that plan. But the fact that she originally betrayed Nami hangs over their heads. 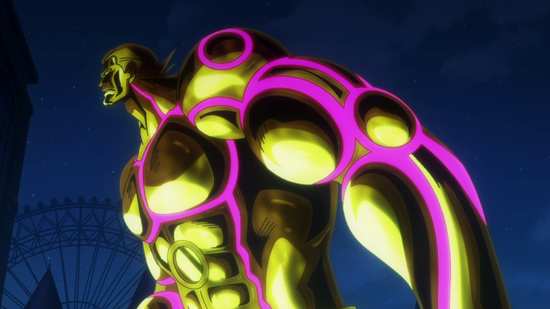 One Piece Film: Gold succeeds because it breaks out of its genre, but stays true enough to its roots to entertain One Piece fans. That’s a hard balance to get right, but this film makes it look easy. It’s fun, it’s memorable, it’s hilarious in all the right places, and it piles on the drama when it needs to. It’s a great One Piece movie, which makes it all the stranger that it hasn’t yet seen a UK release.