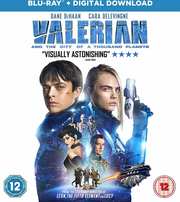 Valerian and the City of A Thousand Planets (Blu-ray Details) 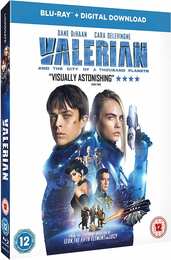 Review for Valerian and the City of A Thousand Planets

There was a time when Luc Besson’s name would be a guaranteed draw for me. With film like Subway, Leon, The Big Blue, Nikita, Taxi, and The Fifth Element, Luc Besson was a guaranteed box office draw, bringing a continental sensibility to the Hollywood blockbuster. But there came a point, maybe around Unleashed, definitely around Arthur and the Invisibles, that Luc Besson movies ceased to have that magical effect on me. He still has a big effect on Hollywood box office, with writer/producer credits on the Taken and the Transporter franchises, but I do get a sense of diminishing returns in films like Lucy, and Lockout, rehashing old themes and styles. He is one director like James Cameron who still has strong, female characters in his films, which is worth mentioning, but I no longer look for Luc Besson movies to watch.

It’s probably why it’s taken a bargain bucket for me to try another sci-fi epic from him, Valerian, or Valerian and the City of a Thousand Planets to give it its full name. It certainly fell flat when it was released, despite being touted as the next Fifth Element, and it does have much in common with that film. The film is based on the Valerian and Laureline comics, or bandes dessinees, running from 1967 to 2010, created by Pierre Christin, and Jean-Claude Mézières (Jean-Claude Mézières created concept art for The Fifth Element). This isn’t Besson’s first adaptation of such material, as he brought The Extraordinary Adventures of Adele Blanc-Sec to screen in 2010, and just like that title, I thought it rather an obscure one to adapt, especially in the English language. I certainly remember Asterix, Tintin, and Lucky Luke comics in my library when I was growing up, but I never saw a Valerian title, although it does appear to have had English adaptations. Still, I should put all that negativity aside. The Fifth Element is one of my favourite films still, and as I recall, it really split the critics back in 1997.

It’s the 28th Century, and agents of the United Human Federation, Major Valerian and Sergeant Laureline try not to let their careers get in the way of their relationship, or lack thereof. A strange energy wave wakes Valerian up from an unsettling dream, before they are assigned a mission to obtain the last of a species, a Mul Converter from a black marketeer. They are to bring this creature to Alpha, a gargantuan space station that has built up since the early days of the space race, a place where the various nations of Earth could meet in peace, and subsequently where alien races could be welcomed as well. It has since left Earth orbit to travel the stars, and has now become known as the city of a thousand planets, home to countless species and environments.

Commander Filitt has ordered them there with the Mul Converter as Alpha is facing a dire threat. The heart of the station has inexplicably become radioactive, the inhabitants driven out, any investigators sent in failing to survive, and this Red Zone is expanding. The station has barely one week left before it is completely uninhabitable. But the real cause of this phenomenon lies in a dark secret in Earth’s past, a secret hidden for thirty years.

Valerian gets a 2.40:1 widescreen 1080p transfer with the choice between Dolby Atmos and DTS-HD MA 5.1 Surround English, as well as a DD 2.0 English audio descriptive track and there are HOH English subtitles as well. It’s a recent film so there are no nits to pick with the transfer. The image is clear and sharp, wonderfully detailed and with rich, comic book colours. The imagination on screen is enchanting, and I’m pointedly reminded of films like Attack of the Clones and Sky Captain, where the digital backlot stood out like a sore thumb. Most of Valerian is shot with actors against green screen, but the finished product looks properly filmic. The audio experience is as immersive and effective as you would rightly expect, and the action comes across with due impact. The music really suits the tone of the film well, kicking off with a little Bowie to get the viewer in the right frame of mind.

You get one disc in a BD Amaray, which boots to an animated menu.

Fans who want to know how the film was made are well catered for in this release. With Citizens of Imagination: Creating the Universe of Valerian containing 5 featurettes running to 58:59.

There are also 14 Enhancement Pods, little social media behind the scenes snippets which run to a total of 36:42.

I really enjoyed Valerian. It’s a fun sci-fi romp with a lot of European charm; which thematically feels a lot like a blend between Besson’s Fifth Element, and Barbarella. I certainly enjoyed the character dynamic between the two leads, Valerian and Laureline, and in Laureline, Besson continues his tendency to have strong female lead characters in his films. I found it interesting to see characters not so defined by traditional gender stereotypes. Valerian is masculine in his pride, his self confidence, and his tendency to play the field, but he is often in awe of Laureline, and not just because of his attraction to her. Laureline is very much feminine, but she’s also headstrong, self reliant, and when it comes down to it, more skilled than Valerian. Despite their ranks, it very much is a partnership of equals, half attraction and half competition, and it makes for a very interesting character dynamic to watch on screen.

Besson has also brought an imaginative universe to life. The film begins on the planet Mul, which has a bit of an Avatar feel to its inhabitants, a wonderful alien paradise, before taking the action to the planet Kyrion, a strange multidimensional affair, with the dimension that all can see a desert, but with the right gear, lets you immerse into a massive market that exists in parallel. It makes for one of the film’s most imaginative sequences, when Valerian and Laureline have to get the Mul Converter from the black market in this parallel dimension. You basically have two action sequences, happening in two parallel dimensions, at the same time. It’s hard to explain, but visually is probably the most striking part of the film.

Against that, the massive space station Alpha almost feels secondary, a gargantuan conglomeration where hundreds of alien species coexist in various habitats. When they are attacked for the Mul Converter by mysterious aliens that no one has ever heard of, it means journeying into that radioactive zone to discover just what is going on. And it’s here that we hit the big problem with Valerian, the storytelling. There is no mystery to the film. With the opening, it sets the scene as to who the mysterious aliens are, just why they might be attacking. The film telegraphs right from the start just who the villain of the piece is, and quite frankly, the characters are all two or three steps behind the audience all the way through the film.

Another problem with the film is the sheer relentless pace of the adventure. It’s barrelling its way through the story, from one hair-raising escapade to another, and it never pauses for breath, never stops to let the characters grow and develop. Valerian and Laureline have to work their issues out on the run, and I’m surprised to say that all those action scenes, all those great stunts and all that effects work, can actually get tiresome.

It may be those glory days of The Fifth Element and Leon are gone, but Valerian doesn’t deserve all the slating it got by many critics. It’s actually a fun, light-hearted romp that doesn’t outstay its welcome, and has all those wacky, quirky Luc Besson signature moments and characters. It’s certainly better than Lucy, but that’s the one that’s getting the sequel!

Great picture, not so good the main stars, but got it on DVD always like Bessons films, like 5th Element. Another similar style film is 'the immortal' by Enki Bilal available in English, about an immortal who falls in love with a human woman, very good si-fi fantasy story.
posted by bandicoot on 18/5/2020 17:09