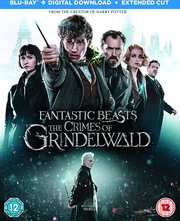 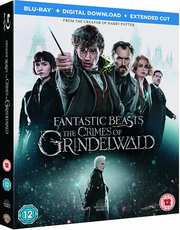 Review for Fantastic Beasts: The Crimes of Grindelwald

I have to admit that I was all Harry Potter-ed out by the fourth film. One thing was my disdain for cinemas kicked in around Prisoner of Azkaban, and when it came to the DVD releases, Warners gave up on consistency around the same time. Lavish collector’s editions for the first two films promised something good, but when the third film got a standard Amaray release, I could see the distributor’s heart wasn’t in the home video release. In the end, I waited until the final movie was out for a boxset, and then it was Blu-ray instead of DVD. When I finally got to see the final five films of the eight, my suspicions were confirmed. They were fun films, but in some ways, they were highlights packages, referring the viewers back to the original books for the ‘full’ story.

So my expectations weren’t high when Fantastic Beasts came about. Visions of the Hobbit movies compared to the Lord of the Rings movies popped into my head for one thing, and in the end, I didn’t watch Fantastic Beasts and Where to Find Them until the Blu-ray hit a bargain bucket. And I was surprised by what to me was the best film in the Harry Potter franchise to date. For one thing, it was an original screenplay, delightfully cinematic, and for another this wasn’t a franchise led by a cast of child actors, no simple black and white tale of good versus evil. There was nuance. Suddenly I was feeling a lot more positive about the whole thing, and I pretty much picked up The Crimes of Grindelwald on the day of release, although it’s had to wait for a Superman boxset to get reviewed before I got around to watching the second film in what is set to be a five film series.

A stormy night in 1927, and dangerous criminal Grindelwald is about to be transferred from New York to Europe to stand trial. When he inevitably escapes, what brief security there was in the wizarding world is threatened once more. Newt Scamander is still under a cloud following his escapades in New York the previous year, but sponsored by his Auror brother Theseus, the Ministry of Magic offers a chance at redemption if he would find Credence Barebone, somewhere in Europe before Grindelwald can get to him. Principled as always, Newt refuses. But when Albus Dumbledore asks him to do the same thing, Newt is persuaded to change his mind. But he and Grindlewald aren’t alone in seeking Credence Barebone. Reunited with Jacob Kowalski, their destination is Paris.

The film gets a 2.40:1 widescreen 1080p transfer on both discs. The theatrical version offers Dolby Atmos (7.1 core) English, DTS-HD MA 5.1 Surround Italian, Dolby Digital 5.1 Surround Spanish, Czech, Russian, Slovakian, and English Audio Descriptive with subtitles in these languages and Danish, Estonia, Finnish, Greek, Icelandic, Lithuanian, Norwegian, and Swedish. The Extended Cut gets Dolby Atmos English, with English, Brazilian, Dutch, French, and Spanish subtitles. Once again, there are no nits to pick with this release in terms of the audio-visual qualities of the transfer. The image is crystal clear, and wonderfully detailed, bringing the colourful and imaginative world to life. The audio immerses you in the film, and there are plenty of grin inducing moments of action and wonder. There is a slight problem with the extended cut of the film in that every deleted scene is flagged by a burnt in caption on the print. It’s no way to watch a film.

You get two discs on either inner face of a BD Amaray, wrapped in an o-card that repeats the sleeve art and blurb. Inside the case you’ll also find a code for the digital copy of the film. The discs boot to static menus.

Disc 2 has the Extended Cut of the film, six minutes longer at 140:59 and with a 25 second intro from director David Yates. As already mentioned, the whole thing is marred by that burnt in caption for the deleted scenes.

J.K. Rowling: A World Revealed lasts 10:15, and the creator of this universe, and screenwriter for the film is interviewed.

Wizards on Screen, Fans in Real Life lasts 19:22, and Ezra Miller (Credence), and Evanna Lynch (Luna Lovegood in the Harry Potter films), get together to watch some clips from this film, and geek out.

Distinctly Dumbledore lasts 9:37, and looks at Jude Law’s casting for the role, and who the character is in 1927.

Unlocking Scene Secrets lasts 49:09, and offers behind the scenes looks, and cast and crew interviews regarding six scenes from the film.

Finally there are 10 Deleted Scenes in various stages of completion lasting 14:23.

There’s a false sense of security with long running franchises, especially those that spin off from previously successful franchises. There is the suggestion that all you have to do is to hook the audience once, and they’ll stick it out for the long run. Sure, something like Star Wars has the legs to survive something like The Last Jedi, but its spin-off movies hit the buffers with Solo. Even established literary classics like The Chronicles of Narnia only had three of the seven books adapted for film, while Philip Pullman’s His Dark Materials only had one film make it to screen. It’s all about the bottom line of course, and if a film doesn’t make money, then the chances are that sequels won’t be forthcoming. So while the first film, Fantastic Beasts and Where to Find Them might have been a hit, the second film in a five film cycle might have been a little too soon to start taking chances. But that is indeed what has happened with The Crimes of Grindelwald.

J.K. Rowling’s name carries a lot of weight, and I suspect that she could afford to bankroll these films on her own if she should so wish. I hope she doesn’t have to. The first Fantastic Beasts film was a great movie, a concise narrative with a beginning, middle and end, a conventional structure. You can watch that, fall in love with the characters, get immersed into the wider wizarding world, and have a great time. The Crimes of Grindelwald is all middle. It’s starts off at full pelt, and just keeps going, ending on the kind of cliff-hanger that you get in a penultimate movie, not in a series still close to beginning. The filmmakers are asking for a lot of trust from the audiences, hoping that they will stick along for the long term.

Following Grindelwald’s escape at the start of the film, the impetus of the story revolves around the search for Credence Barebone, the magically gifted orphan, raised by an anti-magical No-Maj group in the first film, who came into his powers by the end of the story. He himself is on a search for his magical past, his true family and just where he came from, and at the start of the film, he’s wound up in Paris on that search, where he’s joined a magical freak-show, and befriended Nagini, the woman who would later become Voldemort’s pet snake in the Harry Potter story.

Grindelwald wants to find Credence to advance his cause of wizarding purity and supremacy, and the Ministry of Magic want to find him to stop Grindelwald. They want to use Newt Scamander for that purpose and he is reluctant, but Dumbledore wants Credence found for much the same reason, although his motives are a lot more personal when it comes to Grindelwald, and Newt is more beholden to his mentor. Tina Goldstein, the New York Auror from the first film that Newt is smitten with is in Paris looking for Credence as part of her job. Her sister Queenie and Jacob Kowalski are now an item, but relationships between wizards and No-Majes are proscribed, so when they show up in London, Queenie’s looking for an escape from reality. We also meet Leta Lestrange and her fiancé Theseus Scamander in this film. Leta was the woman whose photo Newt had in his case, and it’s revealed that the two had a connection at school, but she has wound up engaged to Newt’s brother. She also has a very personal reason to find Credence Barebone, and so does an enigmatic wizard named Yusuf Kama, for not unrelated reasons.

It sounds like a great impetus for a film’s narrative, but for some reason, The Crimes of Grindelwald falls flat. It certainly is strong in terms of character study. You learn more about these characters, what motivates them, the relationships they have with each other, especially that between Dumbledore and Grindelwald, and as is mentioned in the extras, it’s nice to see a story that brings nuance to this universe, eschewing the straightforward good versus evil, right and wrong of the Harry Potter books. A lot of negativity surrounded Johnny Depp’s casting in the role, but he gives Grindelwald an attractive ambiguity, a well-spoken charisma that makes you see why people would be drawn to him. Odd accent aside, he makes for a far more interesting villain than any we have seen in this story universe so far.

It’s in the pacing that this film fails to deliver. It never feels as if it picks up any momentum. There is a stop-start progression to the narrative, so many threads that it’s hard to grasp a discreet storyline, and an off-beat structure that gives you action when you least expect it, quiet character moments where you expect excitement, and random and lengthy flashbacks thrown in which make you forget the film that you started watching. The climax of the film is worthy of any movie, a magical battle in a Paris cemetery, but it never really feels earned. Despite all the admirable character development in the film, I still feel as if I don’t know the characters well enough to invest in what they go through.

The Crimes of Grindelwald is all middle. Just how good this second instalment of Fantastic Beasts actually is will be determined by how the rest of the franchise plays out. I just hope that the third movie delivers with more aplomb and impact than this one, as if it doesn’t, we might not actually get to see the franchise play out at all. It’s a solid release from Warners, except for that ridiculous Extended Cut, throwing you out of the movie with each restored scene flagged up for inattentive viewers.