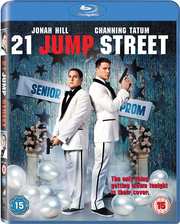 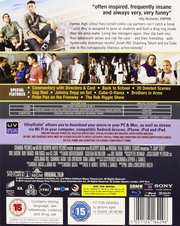 Now I know I’m getting old. Not because they’ve made a parody/remake of a late eighties early nineties TV show, but rather the meaning of blurb has changed. I picked up 21 Jump Street and read on the back of the case “hilarious action-comedy”. I see action comedy, and I’m thinking of movies like Beverly Hills Cop, 48 Hours, Lethal Weapon, and Bad Boys, heavy on the action and the one-liners, with plenty of thrills along the way. Instead 21 Jump Street gives us... this. Comedy, with a few ‘splosions. Action comedies sure aren’t what they used to be.

21 Jump Street was a TV series which ran from 1987 to 1991, and apparently it was aired in the UK as well on Sky. I never saw it, which means I’m not exactly approaching this film with rose tinted specs on. The show was about a unit of undercover police officers, young enough to pass as teenagers, letting them investigate crimes in high schools and colleges and the like. It also notably made a star of one Johnny Depp. It seems it was one of those morally focussed, issue-of-the-week shows, which usually began with a “This week, in a very special episode of...” The feature film isn’t like that.

Schmidt and Jenko went to school together. Schmidt was a geek, while Jenko a jock, and they were like chalk and cheese. But when they wound up at the police academy together, they found common cause in helping each other get through the training, and became friends. But they don’t impress as police officers, and seven years later they wind up assigned to 21 Jump Street, a unit of youthful police officers who work undercover in schools and similar to fight crime there. Their first assignment is to go back to school and bust a drug ring. The first problem is that they get their identities mixed up; Schmidt is supposed to be a jock, while Jenko is supposed to be a science geek. But the real problem is that school has really changed in seven years, and they are so undercover that they forget they’re cops, and start reliving their teenage years.

21 Jump Street gets a 2.40:1 widescreen 1080p transfer on this disc, with DTS-HD MA 5.1 Surround English, and DD 5.1 Surround English Audio Descriptive, with English and Hindi subtitles. The image is adequate, clear and sharp for the most part, detail levels are good, but with an uninspiring autumnal palette making the whole thing seem subdued. The audio is fine, aside from an early moment in the film where dialogue was buried under some egregious pop music. Otherwise the surrounds are put to good use conveying the ambience and action in the film.

You get one disc in a BD Amaray, and an expired UV code. The disc boots to an animated menu.

On the disc you’ll find a raucous commentary from directors Phil Lord and Christopher Miller, and stars Jonah Hill and Channing Tatum.

Finally there is a generic 6:19 trailer reel for other Sony Blu-ray product.

I wasn’t expecting much from 21 Jump Street. After all, it is one of the many Blu-rays I’ve picked up in recent months from my local pound store, thinking a couple of quid on a movie is just like renting it without having to take it back, and should it disappoint, the bin beckons. My expectations were dashed after reading that ‘action-comedy’ descriptive on the blurb, and instead finding a slacker comedy, with its IQ in its shorts, threatening toilet humour and dumb and dumber antics during its 110 minute run. And truth be told, I wasn’t disappointed in that regard.

Yet I have to admit that 21 Jump Street did grow on me. It may be a dumb comedy, and the storyline certainly isn’t shy of clichés, even lampooning one with Ice Cube’s role as an angry and sweary police captain, in a similar way to Frank McRae in Last Action Hero, although with a lot more clarity. It may go through the usual lowbrow comedy hijinks; there’s at least one scene in a toilet, and there are a few gross-out moments. It also certainly isn’t groundbreaking with its storyline either. But there is something really likeable about the characters in the film. It has heart, and there is an honesty to the emotions even as the story heads in daft directions.

There’s an impression that I have, that I assume many people have, that school tends to stay the same after they leave, that subsequent generations tend to go through the same experiences, split into the same cliques. My view of high school comes from the Breakfast Club generation, the Jock, the Nerd, the Basket Case, the Princess and the Criminal. You can see 21 Jump Street playing with that idea, introducing the main characters as a jock and a geek, but to my surprise, it changes things up when they become police officers, and infiltrate the school. Not only does it reverse their identities, compelling each to walk in the other’s shoes for the duration, it also shows that high school has changed in 7 years, that kids have different priorities and outlooks.

I sat down to watch 21 Jump Street expecting one thing, and when it became clear that wasn’t forthcoming, I fully expected the worst from the experience. But despite myself, I wound up being entertained by the film. It may not be the most original of films, and it’s certainly not the most impressive, but it managed to melt my cold visage by the time the end credits rolled. I’ll even admit to laughing during the film. I’ll even go as far as sharing the fact that the next day, I was back at the pound shop, picking up the sequel, 22 Jump Street.