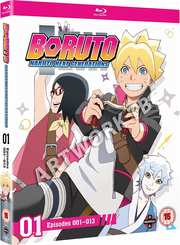 Review for Boruto: Naruto Next Generations Set One

I need my head examined. 800 odd episodes and 10 movies of Naruto aren’t enough. I have to go and request the check discs for the spin-off as well! How much ‘more of the same’ can I get away with in these reviews? But will it be more of the same? Will it be yet more ninja action lasting for countless episodes, padded with dubious filler and interminable flashbacks? Ironically, it’s one of the movies that gave me hope that it wouldn’t. When Boruto the movie was released here a while ago, introducing the characters before the TV series was made, I was impressed with what I saw. It was fun seeing the progression in age of the familiar characters, and it was also fun seeing their collective progeny having an adventure. 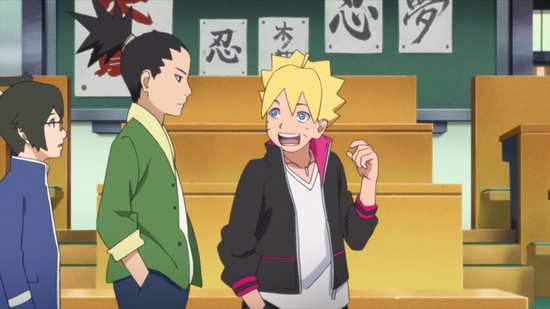 The big thing was that time had passed, the Hidden Leaf Village had become a not so Hidden Leaf City, kids were playing computer games and goofing off, and more importantly, following the Fourth Ninja War, the world was at peace, and there was a lot less antagonism on show. Sure the film had its storyline, its villain, and its action packed climax, but much of the film developed more as a slice of life ninja show. At the time, I opined that while Naruto redux maybe a hard sell, a slice of life ninja show is in a different enough genre to be of interest. Then I tried watching the first episode of this Boruto series, and was presented with a flash forward to a grown up Boruto, in the fight of his life against a mysterious villain, the mountain of Hokages destroyed, the city in ruins, the villain ominously declaring that the Ninja World was over. Drat! 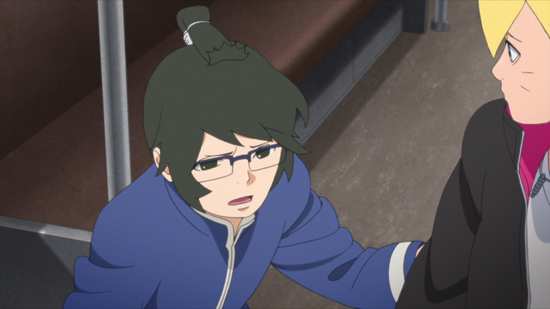 It might be Naruto redux after all, but still, maybe it won’t be one of these never-ending stories that Shonen Jump regale us with. And Boruto has just reached its 120th episode as I write. Double Drat! I guess all that’s left to do is to watch the thing, and hope that it’s good enough, different enough from its forebear to be of interest. 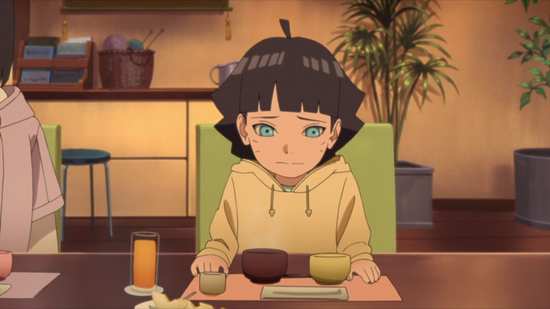 Naruto Uzumaki only had one ambition when he was growing up, to be Hokage. Years later, his son Boruto has no such ambition to become leader. All he really wants to do is to beat his father, to get noticed. While everyone else reveres the Seventh Hokage as the hero that saved the village, ended the war, and brought peace to the ninja world, Boruto isn’t impressed by a father who is always absent, who never spends time with the family. 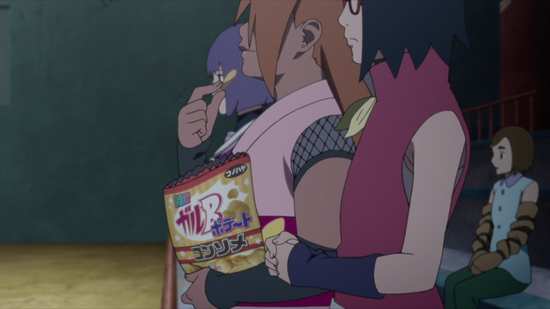 The curriculum may have changed, and the Academy opened up to all students, but learning ninjutsu is still at the heart of their education. As Boruto starts at the Academy, he’s joined by fellow students Metal Lee, Shikadai Nara, Sarada Uchiha, Inojin Yamanaka, and Chocho Akimichi, the next generation of would-be ninja. But as Boruto starts his first day at school, there’s something quite odd going on. 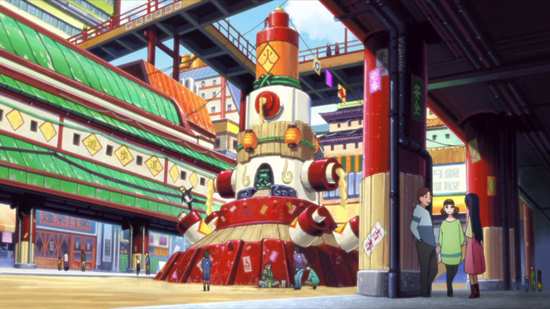 The first thirteen episodes of Boruto are presented across two Blu-rays from Manga Entertainment.

Disc 2
8. The Dream’s Revelation
9. Proof of Oneself!
10. The Ghost Incident: The Investigation Begins
11. The Shadow of the Mastermind
12. Boruto and Mitsuki
13. The Demon Beast Appears! 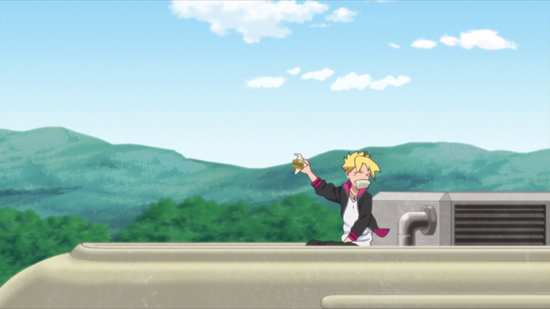 Boruto gets a 1.78:1 widescreen 1080p transfer on these discs. The image is clear and sharp, colours are rich and consistent, and the animation comes across smoothly, with no signs of artefacts, compression or banding. That’s to be expected, as Boruto takes a page from Naruto in terms of its character and world designs, and their comparative simplicity. The world is a lot more modern, the Hidden Leaf Village now has skyscrapers and mass transit, I don’t know what happened to Ichiraku’s ramen stand, as Boruto and his friends prefer to eat burgers, and playing videogames is a common childhood pastime. One disappointment is the simplistic extrapolation that kids look like their parents. Boruto, Shikadai, and Metal Lee might as well be Naruto, Shikamaru and Rock Lee from Season 1 of Naruto, albeit with a few minor tweaks for costume. 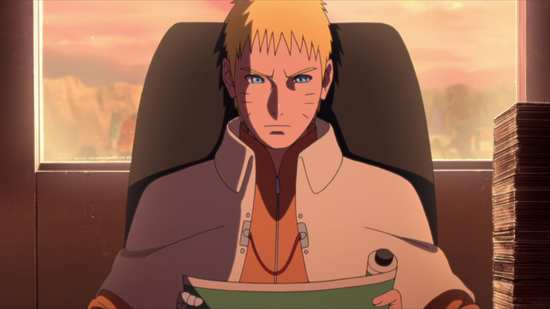 You have the choice between PCM 2.0 Stereo English and Japanese with optional English subtitles and a signs only track. The audio is free of any glitches or dropouts as you would expect from a modern anime release. The actors are suited to their roles, with the Naruto cast returning to voice their characters, and the new cast for the Next Generations work well too. The music is suitably Naruto-esque, although I miss that particular sting for the next episode previews. The subtitles are accurately timed and free of typos, but they are of the thin, white font variety that is easy to lose against busy backgrounds. 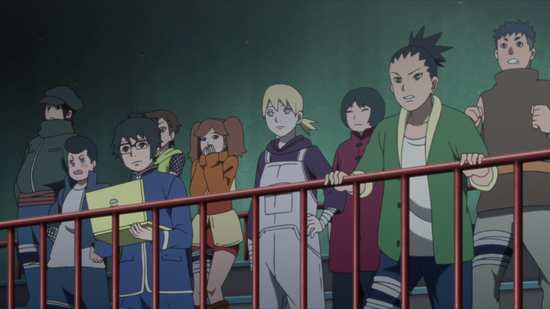 The extras on disc 2 follow the Naruto Shippuden model. 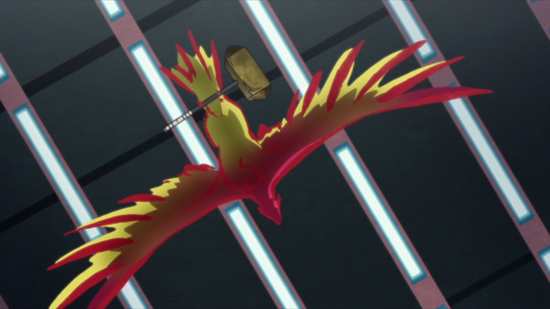 There is a whole lot that is comfortable and familiar about Boruto, yet there is just enough different to make it worth watching if you are a Naruto fan. Let’s face it, you’ve come to the end of Naruto’s approximately 800 episodes, all of the original series, and all of Shippuden, and you could conceivably go right back to the beginning and start over again, with little Naruto at the Academy, crushing on Sakura, and competing with Sasuke. It was all small scale and pleasant fun, introducing the characters and setting the stage, the odd moment of peril and a couple of hints of where the show might go, but nothing too heavy or dramatic. You’ll get that exact same vibe from the start of Boruto, although it’s set a little earlier in time, with Boruto and his friends starting at the Academy, instead of preparing to graduate. 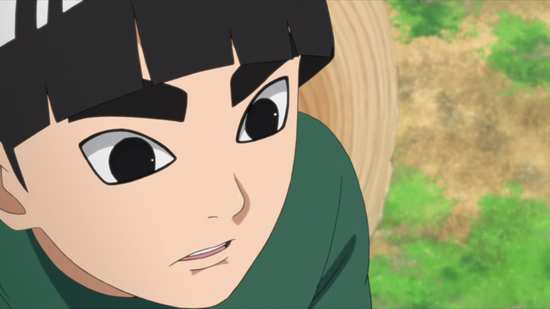 So the choice is to either go back and re-watch Naruto from the beginning, or watch Boruto instead, which offers you a similar feel, but with a new story, HD visuals, and widescreen, instead of on a 4:3 DVD. I have to admit my disappointment at Boruto, as it’s just not enough of a departure from the original format to justify its existence. It really does feel like more of the same, which opens it up to accusations of cashing in. There’s nothing wrong with that of course, but it can feel cynical at times, especially when the characters appear so similar to their parents. 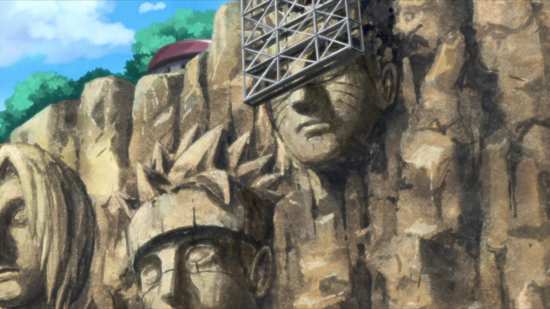 The big difference of course is that Boruto is set during a time of peace for the ninja community, the majority of students at the Academy come from loving families, they are all mostly friendly, and the world is such that the curriculum at the academy has been broadened beyond just the ninja arts, as warfare and combat isn’t a goal; many of the students might be expected to pursue other careers. Whereas Naruto was an outcast, distrusted and disliked by the villagers and the other students following the 9-Tails attack that left him an orphan soon after birth, Boruto has his mother, his kid sister, and his father, albeit a somewhat distant Seventh Hokage of a father, and his biggest issue stems from that distance. Sasuke and Sakura’s daughter Sarada is a childhood friend, as is Shikamaru’s son Shikadai. While Boruto has inherited his father’s tendency to seek trouble and play pranks, it’s looked on with wry warmth rather than annoyance. 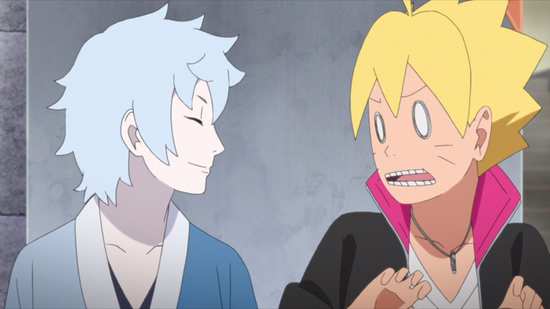 Starting at the Academy and meeting new students is the usual mix of making friends and rubbing up against potential rivals, but generally the atmosphere at the school is a lot lighter and friendlier. Just like Boruto, the children of the Naruto characters tend to inherit the character traits of their parents, Sarada is both a little aloof and outspoken, Shikadai is smart, but finds everything a drag, Choji’s daughter Chocho like to eat, Metal Lee is into training and youthful vigour, although he does get unexpectedly nervous, and it’s only Ino and Sai’s son Inojin who steps away from either of their characters. It’s a bit of a disappointment, but you can see why they used this shorthand for characterisations to keep the Naruto fans on board. It’s actually the new characters like Sumire the Class Rep, Denki the rich kid, Iwabe the delinquent, and Mitsuki the transfer student that make things interesting, as they are characters we haven’t really seen before, in either generation (Mitsuki’s father is hinted at, but he certainly doesn’t share any of ‘his’ character traits). 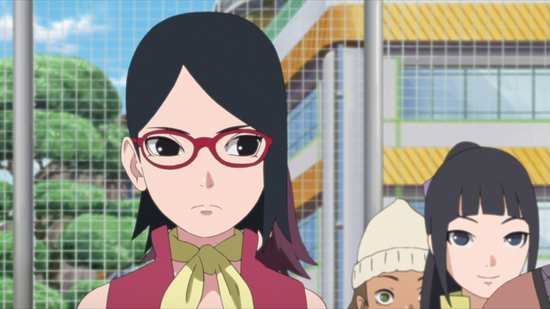 I have to admit that I certainly did enjoy seeing the original characters 10 or 15 years down the line, although at this point, we certainly haven’t caught up with them all. Their character designs have been updated to look more adult, and it’s interesting to see the roles they have assumed, not least Naruto himself, who has achieved his dream to become Hokage, even if it means sacrificing his family life and straining his relationship with his son. Shikamaru is his right hand man; Hinata is his wife, Boruto and Himawari’s mother. We get a glimpse of Sakura at work, but we actually see more of Shino, the quiet one with all the bugs in Hinata’s team. He’s now a school teacher, in charge of training Boruto and all the other students in class. The previous generation also makes an appearance, with the retired Sixth Hokage Kakashi showing up, not having aged a day behind that mask, although some of his contemporaries do show their age. 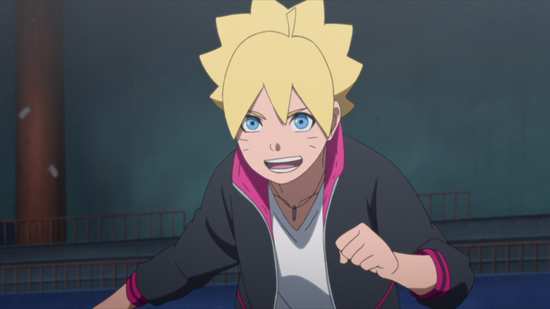 There is a story developing over these episodes as well. There’s something odd happening in the village, people are suddenly becoming possessed by some sort of spirit, becoming violent and out of control. Boruto first notices it before he starts at the Academy, when he helps Denki with some bullies, and subsequently the possessed Denki goes about getting his revenge. Boruto sees it like some sort of dark blue energy field that envelops and enters the target, leaves it when it’s done devouring chakra, or is forced out by some ninja-ing. At first Boruto thinks that he’s inherited his mother’s Byakugan vision ability, the way his little sister has, but it turns out that this ability is something new and unrelated. As is typical, Boruto and his friends investigate, even as the Hokage has authorised an official investigation, with Boruto wanting to be taken seriously, and not treated as a child. Naturally he and his friends go it alone, and get into no little danger. At the end of this collection, it becomes clear just how different and unique Boruto’s vision ability is, and it leaves the collection on quite a cliff-hanger. 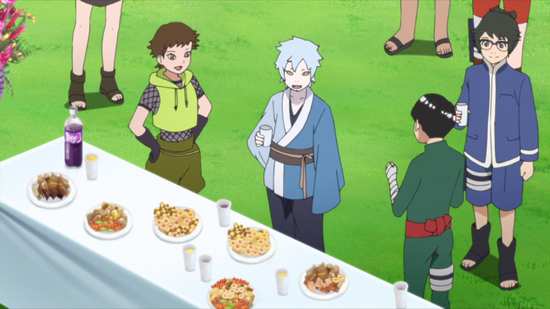 Boruto really is more of the same at this point in the proceedings. It is more Naruto for those Naruto fans that don’t want to re-watch the original series. It sounds a bit like an oxymoron, but I can see how NTSC-PAL converted 4:3 DVDs on a 60” plus 4k screen might not be your first choice to take in Naruto today. But you get a similar feel to those first few Naruto episodes from this Boruto series, which makes it a great choice. Once again, I have to reiterate my disappointment that Boruto is simply covering old ground again, but it does it competently enough, and it is entertaining.