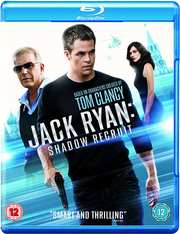 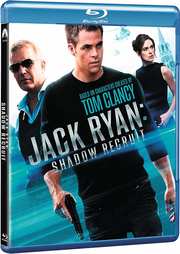 So this is where Hollywood is now. Take an older movie franchise and reboot it with a bankable face in the hope of kicking off a new franchise, regardless of whether it needs the reboot or not. Sometimes they are reboots of reboots, made so soon after the last one that they seem wholly superfluous, sanctioned only by box-office numbers or producers’ whimsy rather than any true creative originality. It also makes me feel that Hollywood is running out of stars, as I keep seeing the same faces over and over again. Apparently Chris Pine might have seemed a safe pair of hands for a reboot after he was cast as James Kirk in the reborn Star Trek franchise, although that movie series is currently going nowhere. But he was cast as Jack Ryan, not the first character you might consider rebooting in a genre still owned by Bond, Bourne and Mission Impossible. He’s the fourth actor to play the role, and the first in an original story, not based on one of Tom Clancy’s novels.

Badly injured in a helicopter crash in Afghanistan, former marine Jack Ryan is recruited straight out of rehab by the CIA; his mission, to go back to college and finish his education, then get a job in Wall Street. As an analyst, all he has to do is to watch the numbers move around bank accounts, and spot where money is heading towards terrorist organisations. But when he spots irregularities in the accounts of a Russian company, it appears to suggest something far more ominous and immediate than mere terrorism. With the accounts sealed at the US end, someone will have to go to Moscow and the company owned by Victor Cherevin to audit them there. Suddenly, the analyst has to be a field agent. And his fiancée still thinks he’s only a banker.

The film gets a 2.40:1 widescreen 1080p transfer on the disc, which is perfectly fine, as flawless as you would expect from a modern era film, although with this being an action movie, albeit a ‘thinking man’s’ action movie, the orange and teal is applied by the bucket load. In terms of audio you have DTS-HD MA 7.1 Surround English and DD 5.1 Surround French, German, Italian, Spanish, Japanese and English Audio Descriptive, with subtitles in these languages plus Dutch, Danish, Swedish, Norwegian and Finnish. Note that the Russian dialogue is translated with player generated subtitles, and if you happen to skip back to turn on the English subs with your remote to catch some mumbled dialogue and turn them off afterwards, you’ll turn off those player generated Russian translations unless you use the disc’s pop-up menu. The audio is fine for the most part, the dialogue can be a little low, but the action and music comes across well. One issue is the helicopter crash at the start of the film. It’s as if the movie is recorded at level 5 for the duration, but for the helicopter crash alone, it gets turned up to 10. It’s an odd bit of sound design that threw me out of the movie to be honest.

You get 1 disc in a BD Amaray which boots to an animated menu.

On the disc you’ll find a commentary from director Kenneth Branagh (who also played Viktor), and producer Lorenzo di Bonaventura.

You can also hear them again if you choose, commentating on 5:03 of Deleted Scenes.

Featurettes on the disc comprise the following.

Jack Ryan: The Smartest Guy in the Room (13:37), the cast and crew interviewed about the character and the earlier films.

Sir Kenneth Branagh: The Tsar of Shadow Recruit lasts 9:49, and there is plenty of behind the scenes footage of the director at work.

Jack Ryan: A Thinking Man of Action (5:19) takes a look at the film’s action sequences in production.

Old Enemies Return lasts 21:13 and focuses on the villains of the film, comparing them to the real world threat posed by the Russians.

The best Jack Ryan movie is The Hunt for Red October. It was the perfect movie for the perfect time, a tense political thriller made at the height of the Cold War, adapted from a book from that period. Jack Ryan is a product of the era and the film is so apt that it is hard to fault. Although much as Alec Baldwin inhabited the role, it is a Sean Connery movie. The Cold War ended, the Iron Curtain fell, and Harrison Ford took on the mantle of Jack Ryan, and for me his is the definitive portrayal of the character, helped in no small measure by the books the films adapt. Patriot Games has Irish nationalism at its heart, while Clear and Present Danger is about the South American drugs trade. These proved that you don’t need the Cold War to make great political thrillers. The Sum of All Fears on the other hand was based on a Cold War era book, although critics probably attributed its lack of success to Ben Affleck in the role of Jack Ryan rather than the anachronistic story. I suppose after that, another reboot was the only way to go.

Chris Pine certainly has a promising start as Jack Ryan in this film, the first to tell an original story, and the first to really fill in his back story, although it’s all moved to the 21st Century. He’s inspired to enlist following 9/11, and serving in Afghanistan as a marine, he’s injured in a helicopter crash. During his rehabilitation, he meets his future wife, and is also recruited by the CIA. His job is to follow the money to the terrorist groups, and flag up that activity to his bosses. This is the seed for a good story; certainly domestic and foreign terrorism is the biggest threat that we hear about on the news day to day, and a nice, tense thriller following a story like this would hold the attention.

But this is Hollywood we’re talking about. They need movies to be big, they need threats to be existential, the whole world has to feel the impending peril, and so the clichés start flying. The plan, anonymously sponsored by the Russian state, is to prop up the dollar by investing heavily in it, use a terrorist attack to give Wall Street a case of the jitters, and as soon as the dollar starts to drop, sell like crazy, crashing the world’s economy, because you’ll be in a better place to rebuild as you’ll have the material resources which the US lacks. It’s not exactly the most inspiring of plot lines. Incidentally, the chief villain of the piece is terminally ill, a cliché so painful that I actually had to stop the disc at that point, and go make a cup of tea before the ache died away.

All of this is motivated by Russia not getting its way in a trade deal. Only a complete lunatic would wreck the world’s economy because they didn’t get their way... Only someone completely out of their mind would... Look, just because the current leader of the free world is a complete and utter tit who would do just that, doesn’t mean that this storyline isn’t absurd and fanciful to the extreme.

An absurd storyline could be acceptable if the script and the characters were up to it; that is how the Mission Impossible movies work. But while Chris Pine managed to inhabit Captain Kirk well enough to reinvent that franchise, he can’t do it with Jack Ryan. The character is just too bland and unspecific. Indeed most of the characters really fail to make a mark in this film, and in the end it could just be any other tech thriller. Actually, it turns out that it is; the producers took an existing script and shoe-horned Jack Ryan into it. One thing that this film really does prove is that Hollywood should stop making tech thrillers. It always boils down to characters looking at screens, and with computers doing things that computers can only do in Hollywood movies, impelled by the Plot Processor, and the Cliche USB drive. The only person who ever used a mouse in a Hollywood movie was Scotty in Star Trek IV, and he thought it was a microphone. The dullness and predictability makes me want to avoid these films.

You don’t have to avoid Jack Ryan: Shadow Recruit. It’s not that bad. It’s a perfectly watchable action thriller with forgettable characters and a meaningless plot. It will pass the time, and be forgotten the next day. There are still two great Harrison Ford movies, and a brilliant Sean Connery movie that do the character of Jack Ryan justice, and they’re well worth seeking out. I wonder who’ll be cast in the next reboot...