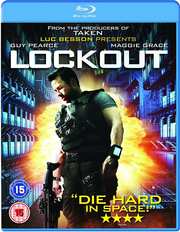 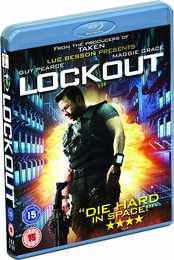 Luc Besson’s name is a trigger for me. Like it or hate it, I’ve always found something to appreciate in a movie directed by Luc Besson, and will always find a couple of hours to spend on one given the opportunity. He has a quirky way of looking at mainstream cinema that results in a rather unique vision, a singular voice. So when I saw Luc Besson’s name plastered over the case for Lockout, a four star review in Nuts quoted with “Die Hard in Space”, I gave it a try where normally I might have given the low-budget, orange and teal cover a miss. I should have read more closely, as Besson’s only the producer writer on this one. It’s directed by someone else, or rather two someone elses.

An intelligence operation goes wrong, and Snow is convicted of murder and espionage, sentenced to 30 years stasis on the orbiting penal installation of MS One. He’s going to be on ice for a long time, but before his sentence begins, he gets an unexpected chance at redemption. The daughter of the president of the United States, Emilie Warnock was on a humanitarian mission to MS One, when there was a prison break. The inmates took over the facility, taking everyone hostage. Now Snow has one chance at freedom, if he rescues the president’s daughter from the facility, and if he can find his partner, also incarcerated on MS One, who might be able to prove his innocence.

Lockout gets a 2.35:1 widescreen 1080p transfer with a DTS-HD MA 5.1 Surround English track, and optional SDH English subtitles. The image is clear and sharp, detail levels are as good as you’d expect from a modern film on Blu-ray, but Lockout is a film that was shot digitally, and it doesn’t look too good, with most of the issues in the source. Contrast is lacking, blacks tend to greys, and there is as much digital banding as you’d find in an average anime encode. But this is live action, except for the effects shots which are so CGId that they look like videogame cutscenes. It’s worst when live action blends with effects shots. There is a motorbike chase early on which is pretty laughable. The audio is fine, the surround effective, and the dialogue mostly clear. The action comes across well, while the music drives the pace of the film, without ever feeling particularly memorable. Some of the sarcastic one-liners that Snow gets are pretty cool, but the rest of the script is naff, and some of the lines that Peter Stormare had to utter made me wince.

You get one disc in a BD Amaray, which boots directly to an animated menu.

On the disc you’ll find 5 interviews with the cast and crew, running to 31:11 in total.

There are three behind the scenes featurettes, Torsion Fields Sequence (3:43 French audio with subtitles), MS One Action (4:56), and MS One Construction (8:04).

There are 2 Unreleased Scenes, including a slightly alternate ending.

Finally there are previews for Gone, Piranha 3DD, and The Grey.

All you need to know about Lockout is that the producers lost a court case to John Carpenter regarding plagiarism of his films Escape From New York, and Escape From LA. That ‘original idea from Luc Besson’ in the credits needs to be taken with a pinch of salt.

I am surprised that it got that far though, as I recall back when I was a kid, most of the videos I checked out from our local rental shop, were cheap, second rate knock-offs of the big Hollywood blockbusters, with dodgy acting, and even dodgier special effects. People would be raving about Conan the Barbarian, and I’d be watching Beastmaster. The Star Wars movies were massive, and I’d be renting Battle Beyond the Stars. And that is what we have here with Lockout, a poor man’s Escape from New York, a b-movie, albeit with A-list talent involved. The script is poor, the characters are wafer thin, and realism quickly goes out of the window.

None of this matters of course, as movies like these are never meant to be taken seriously. They are supposed to be pure, disposable, bubblegum fun. It’s a film that wants to one-up all that has come before. We’ve all seen the hypodermic to the heart to revive people in cardiac arrest. It’s been an ‘Ew’ moment ever since Pulp Fiction. This one has someone restore brain activity with a needle to the brainstem, straight through the eye-ball. Double ‘Ew!” and completely impossible of course.

But Guy Pearce (who I’ve never been able to stop thinking of as ‘Mike from Neighbours’) makes for a decent anti-hero in Snow, he has a great sarcastic personality that resonates through the film, and makes for a nice chemistry with Emilie. The villains are mostly disposable, particularly the main villain, but his brother Hydell is the kind of gnarly awkward crazy character seen in many a Luc Besson film, and one that does stand out.

Lockout would be perfect on VHS. It is a film from a bygone age. A little bit crap, but a whole lot of fun into the bargain, action packed and with a dark sense of humour. I wouldn’t spend more than I did on the disc, and given that I picked it up in my local pound shop, you won’t feel hard done by if you get it for a similar price.