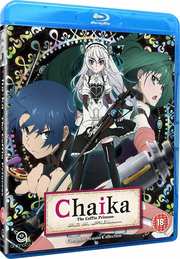 This is such a cute fantasy show, that it’s an absolute shame that it fell through the cracks in the UK. I initially reviewed Manga Entertainment’s DVD release of the first season, but for the second season, I had to import the Australian Blu-ray release from Hanabee Entertainment. I need consistency of format, if not case spines, so I’ve now gone back and bought Manga Entertainment’s Blu-ray release of the first season, perfect for my first re-watch of the show. 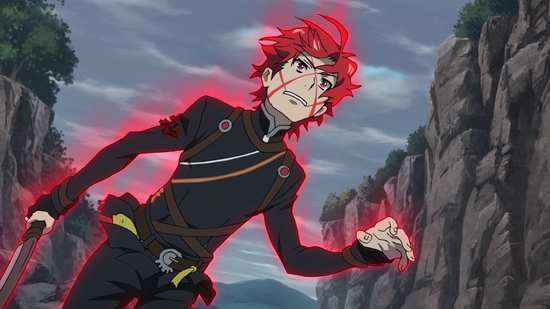 Chaika Trabant is the kind of cute girl that populates many an anime, but not too many cute anime girls lug a coffin twice her size wherever they go. She’s a little unconventional though (not just because of the coffin), as Toru Acura learns when he runs into her while foraging for food. He and his sister Akari were saboteurs in the last war, but it’s harder making ends meet during peacetime. The future looks more promising when Toru rescues Chaika from a rampaging unicorn, although not without Chaika’s help (she’s actually a wizard, and the coffin contains her Gandr, a magical rifle). 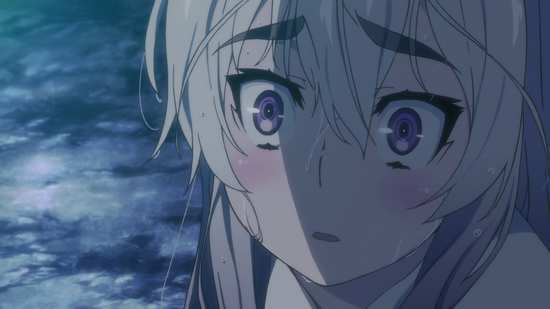 Chaika’s on a mission to find and reclaim the scattered body-parts of her late father, so that she can mourn him properly. Given her sense of direction, she can use Toru and Akari’s help as guides and as mercenaries, given that those who possess the remnants of her father aren’t keen on giving them up. For Chaika’s father was the late Emperor Arthur Gaz, a five-hundred-year-old tyrant that was finally slain in that last war. Those body-parts are imbued with great latent magic, the heroes that possess them won them as prizes for slaying him, and there are those that don’t want them falling into the wrong hands. On the other hand, there are still those loyal to the Emperor that would use their power, and Chaika as a figurehead ruler, to re-establish that tyranny. 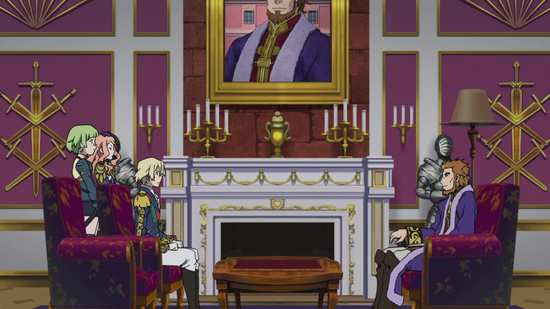 12 episodes of Chaika: The Coffin Princess Series 1 are presented across two Blu-rays from Animatsu.

Disc 1
1. The Girl Who Bears the Coffin
2. The Lazy Man’s Choice
3. The Forest Where the Hero Dwells
4. The Dragoon’s Wish
5. The Pursuer and the Pursued
6. Red and White
7. The Valley of No Return
8. Empire of Consolation
9. The Value of Memories 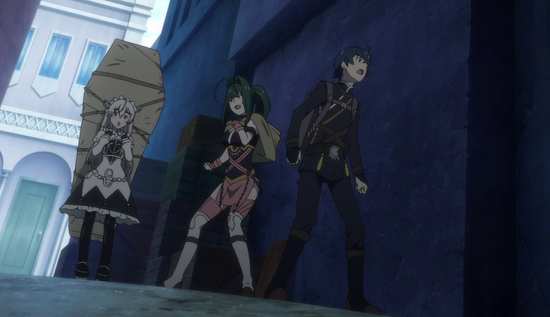 The Blu-ray discs present the show in 1.78:1 widescreen 1080p ratio and resolution. The image is clear and sharp throughout, colours are strong and consistent, and there is no problem with compression, aliasing, or digital banding. Chaika looks great on Blu-ray. It’s a Studio Bones animation, so while the character designs may be somewhat standard for anime (nice costume design though), they are studiously well animated, with great attention to detail, and with fluid, expressive action sequences. The show is bright, with an appealing, vibrant colour palette, and it looks great. 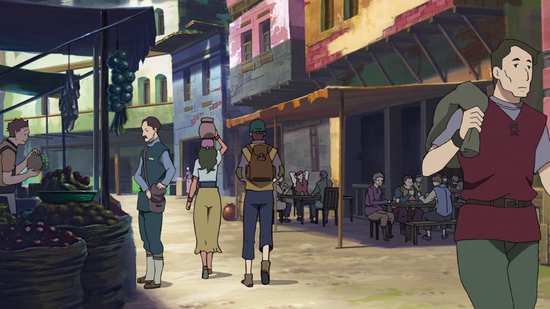 Unlike the Australian discs I imported for the second season, re-authored by Hanabee, Animatsu merely repurposed the Sentai discs for their Season 1 Blu-ray release, so we get DTS-HD MA 2.0 Stereo English and Japanese with subtitles and signs locked during playback. My preference as always is for the original language track, and it’s a solid, likeable cast, with Chaika in particular endearingly cute. I gave the English dub a try, and surprisingly for a Sentai effort, is more than just bearable, with some enthusiastic and fitting performances, especially from Toru’s voice actor. I must say that for me, the English Chaika sounded more moronic than quirky, but that might be down to English being my first language. I can’t guess how Japanese Chaika sounds to a native Japanese speaker. 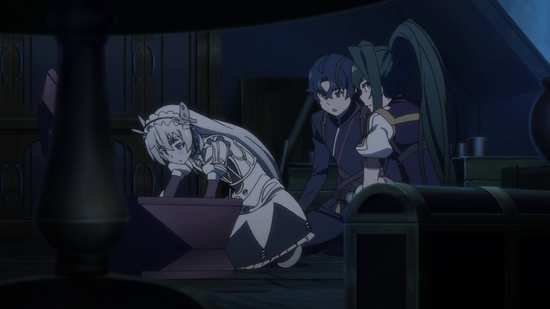 You get two discs in a BD Amaray, with one on a central hinged panel. The inner sleeve has an episode listing.

The discs present their contents with static menus, and each episode is followed by a translated English credit reel. These are the Sentai discs, merely repurposed for Region B with an Animatsu logo at the head. 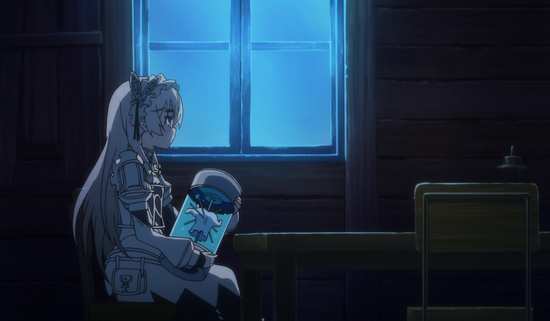 Disc 1 autoplays with a trailer for Vampire Hunter D.

You’ll find the extra features on disc 2. There are Japanese promos running to about 3:56, you get the textless credits for the show, and you can play trailers for Black Bullet, Brynhildr in the Darkness, and Blade & Soul, as well as the trailer for Vampire Hunter D again. 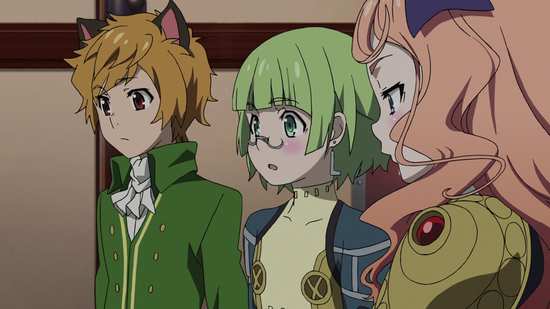 Not too long ago, I opined that a good anime will have either great characters, or a great story, while an exceptional, memorable anime will have both. Chaika: The Coffin Princess is one of the good ones. Its goodness comes from its story, which given that it’s adapted from a light novel series, means that its selling point is an exceptionally strong narrative structure. This a story that draws the viewer in, makes for compelling, ‘one episode more’ viewing. That’s not so much the case with the characters, which so conform to the current anime fashions that it’s hard to see them as anything other than cookie cutter archetypes. 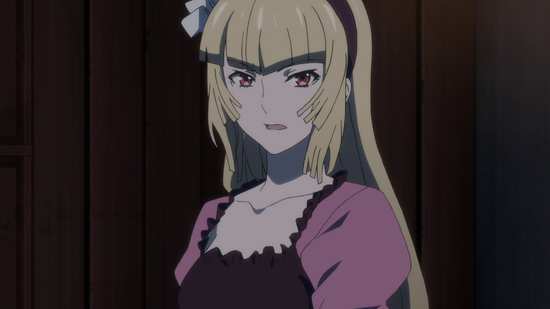 The blurb for the show is deceptive too. The first sentence is, “The year is 1604”, but it doesn’t immediately sink in that it’s the year 1604 in a complete fantasy world of mythical creatures and magic. You might have expectations for a historical European setting, with a twist; I know I did, but you should put that out of your mind, as this is a pure fantasy realm of magi-science. This is a world where magic has been analysed, quantised and understood to the point that it can be used in a predictable way to power the world’s equivalent technology. Magic spells are cast with the aid of rifles called Gandr, and magic psycho-fuel is used in the ‘bullets’ for such, and to fuel Vehicles and Sky Fortresses. 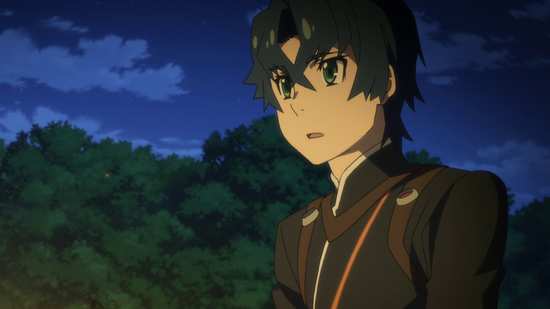 Visually the world is an interesting mish-mash of eras and ideas, mixing knights with cavaliers, and saboteurs (although in this world saboteurs are more like ninja), and the world is run down feudal lines, albeit with a touch of United Nations politicking as well. Conceptually it’s a very interesting world. 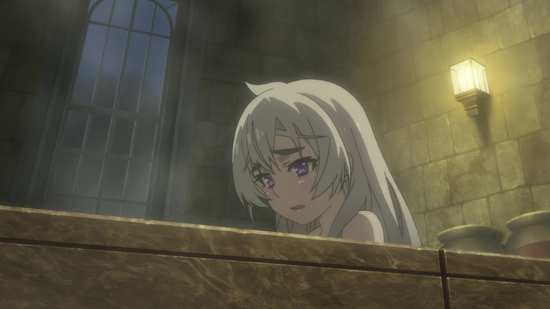 The story is intriguing too, with a purported tyrannical emperor, Arthur Gaz, violently deposed after 500 years of rule. He’s supposed to be the man who single-handedly brought about this world of magical technology, but with his fall ended an era of continent spanning war. Now, his daughter Chaika travels the land with a coffin on her back, seeking his remains so she can properly mourn him. That he has an heir that his followers can rally around is concern enough, but it’s Chaika’s mission that has certain people worried. Fortunately for Chaika, early on she encounters a couple of former saboteurs, ‘siblings’ Toru and Akari Acura, who accept employment to help her track down the remains of her father, a contract that leads them on a fantastic adventure, seeking out the eight heroes that slew Arthur Gaz, and were rewarded with his body-parts. 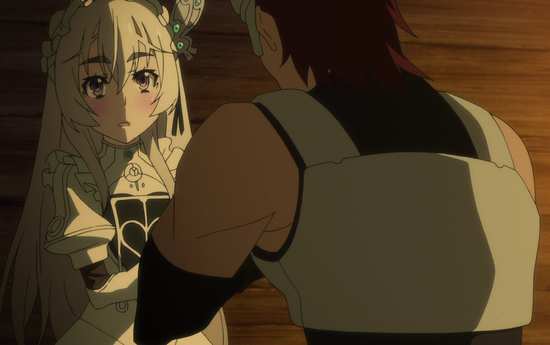 Hot on their tail is the Gillet Corps, a group of agents from the Kliemann agency, working on behalf of the Council of Six Nations to investigate and deal with the Chaika situations. They’re an interesting collection of characters that together go on just a transformative journey as Chaika and her allies. The further into the show we get, the more interesting the story becomes, as it turns out that Chaika isn’t who she appears to, she’s a lot more complicated than her appearance and simple devotion to her mission suggests, and the search for Arthur Gaz’ remains has far deeper a meaning for the world. Of course to go into any detail at this point would invite spoilers, but to be cryptic, it’s when the singular becomes plural that the show really grabs you. 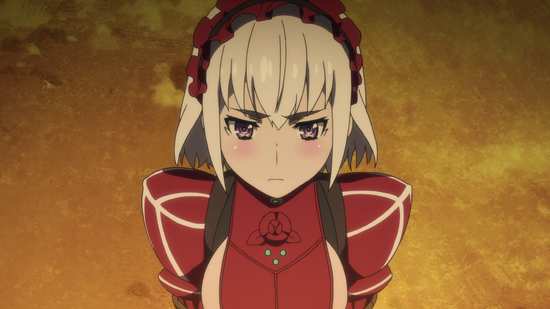 The characterisations are rather clichéd however; there’s nothing fresh or new about them to engage and appeal beyond the usual anime expectations. Chaika is cute with a capital Q, with a moe inducing character design, and a quirky way of speaking that will certainly appeal, but short, cute, oddly inflected grey-haired anime girls are a dime a dozen. The cuteness quotient doubles pretty quickly when a dragoon named Frederica joins their party, spending most of her time as a small cat, or a young girl instead of her dragon like form, in the hope that Toru will keep his promise and fight her to the death. Toru doesn’t have a lot of luck with women, as his adoptive sibling Akari is one of the psychotic, quiet spoken stereotypes that has a crush on her brother, tends to violently wield her war-hammer whenever it looks like he’s getting too close to another girl, and has an ambition to stuff and display his corpse. Usually the incest thing is a major ick factor in anime, but it’s made clear pretty quickly that they’re not blood related, and the forbidden love aspect is really played for laughs. Toru also is more than just the usual hapless male; he has to be in a show as action packed as this, and he can give as good as he gets when it comes to interacting with the rest of his party. Meanwhile one of Alberic Gillet’s party, a flame haired girl named Vivi has an unrequited love thing going with Gillet that gradually develops in a clichéd way through the series, albeit with an almighty twist at the end. So while the story may be refreshing, original and interesting, the characters are more like a comfortable pair of worn in shoes that offer little in the way of surprises. 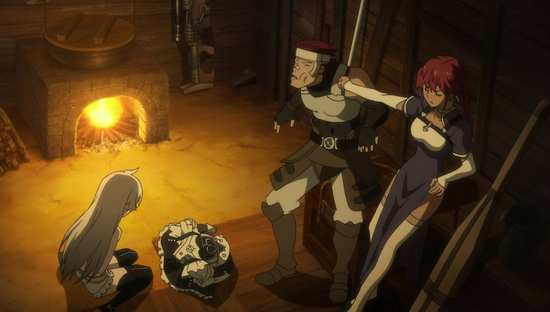 But I have to admit that I was impressed by Chaika’s story. It’s well paced, inventive, and entertaining. It’s got an appealing mix of witty comedy and gripping drama, and it doesn’t at all telegraph its revelations or its twists and turns. Everything new that you learn about this world and its characters comes as a genuine and appealing surprise. Even one potential weak point, a stereotypical, psychopathic child serial killer villain, is actually revealed to have a plausible reason behind his actions. Chaika: The Coffin Princess is well worth seeking out, and I’m very happy to have upgraded this series to HD, as it looks really good on Blu-ray.