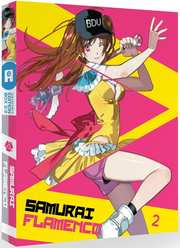 Review for Samurai Flamenco - Part 2 of 2

Back when I reviewed Part 1 of Samurai Flamenco, it was a UK exclusive release in English speaking territories. That was in 2016. Since then, it’s had an Australian DVD release, but for US fans, it’s streaming only. We’re still unique in getting the show on Blu-ray. At the time, there were no review copies of Part 2, and it’s not my favourite show. But I do have that niggling completist in me, so at the end of last year, when Part 2 dropped to below £15 on an e-tailer website, I finally snagged a copy. I ought to have waited, as for their Christmas deals, All the Anime put out both parts of Samurai Flamenco for £5 apiece. They then wheeled out the offer again in the New Year. A 22 episode series in collector’s edition packaging for £10 is a steal you might think, but with All the Anime titles liable to go out of print at the drop of a hat, Samurai Flamenco is notably still in stock. That says something about the show that isn’t too complimentary. But as I said... I am a completist. 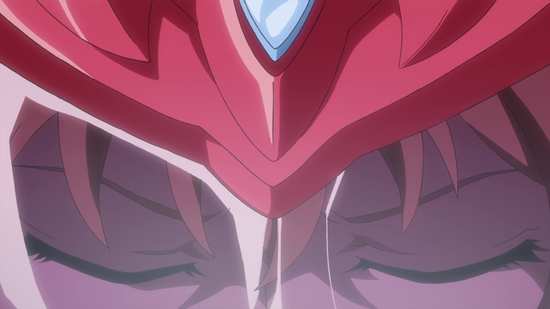 Hazama Masayoshi is a male model, working his way up the popularity rankings in the hope of obtaining more fame and fortune, spurred on by his agent Ishihara. That’s his day job. What he really wants to be is a Champion of Justice, a superhero. Inspired by the TV shows he watched as a child, and his grandfather, by night he dons the suit of Samurai Flamenco, and sets forth to put right all that has gone wrong with the world. You don’t get to be a world famous superhero overnight; you have to work your way up, which is why a costumed idiot is running around the city, lecturing people about misdemeanours, and getting beaten up by middle school students. You’d think that the police would be quick to lock up such a crackpot, but fortunately for Masayoshi, the first policeman he encounters is the off-duty Goto Hidenori, who finds Masayoshi cowering naked in an alley. He’s a hard-working policeman who has up till now turned a blind eye to misdemeanours, and who maintains a long distance, text and e-mail relationship with his girlfriend. That leaves just enough romance in his heart to give Masayoshi a break, and the two even become friends, bonding over old superhero TV shows, and with Goto reining in Masayoshi’s excesses. But then Samurai Flamenco’s deeds get noticed, and things really begin to change. 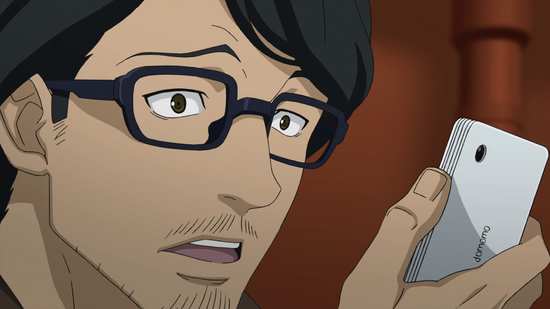 Eleven episodes of Samurai Flamenco are presented across two discs from All the Anime.

Disc 1
12. Document! We are the Flamengers!!
13. Night Before the Decisive Battle
14. The Destruction of Japan
15. Imitation Justice
16. Wandering Hero 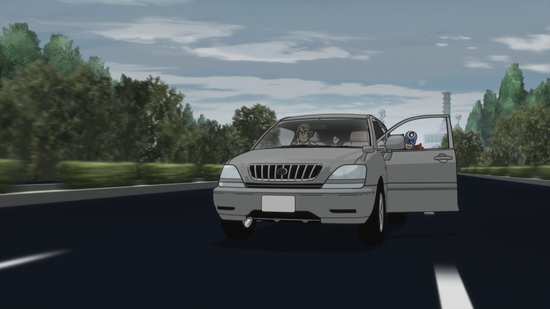 Samurai Flamenco gets a pretty generous episode distribution across two dual layer Blu-rays, so finding nits to pick about the HD transfer is tougher than usual. It’s a gorgeous transfer, clear and sharp, bringing out the vibrant palette of the show with impact and vitality. I only noticed a smidge of digital banding this time. The character designs are generic anime style, but memorable enough, while the animation is fluid and doesn’t lack for energy. The action sequences really pick up in intensity and imagination in this second half of the series. 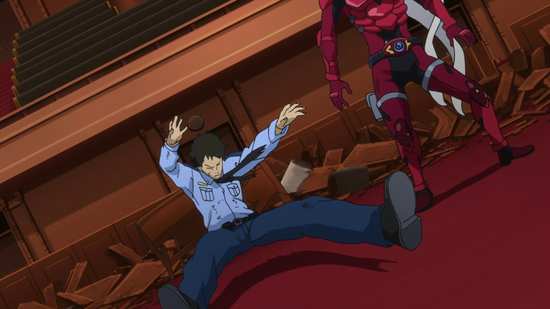 You have the option of DTS-HD MA 2.0 Stereo French, with a signs track, or DTS-HD MA 2.0 Stereo Japanese with French or English subtitles, with all options locked during playback. The Japanese audio is fine, with no dropouts, the action represented well, and the music driving the tone of the show. The dialogue is clear, and the subtitles timed accurately, with the actors suited to their characters. One problem is that the songs aren’t subtitled, not the theme songs, and more importantly not all of the insert songs, which given that three of the characters are a girl idol group is a significant omission. Another problem is that this is one of those releases that have issues displaying subtitles and signs simultaneously. Sometimes it’s hard to read all the captions as they hasten by at such moments, and in this collection, some on screen text just isn’t captioned. 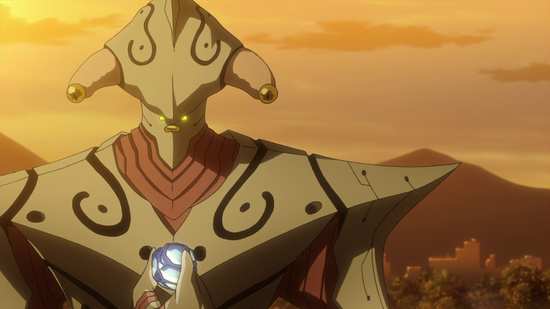 You get a chipboard artbox with the character artwork either side. The BBFC certificate is a sticker on the cellophane wrap, while the blurb sheet is merely glued on the back and can be easily removed. Inside the case, you’ll find a fold-out digipack which holds the two discs on either face, and which offers more innovatively designed character artwork. Finally there is the 20-page artbook, which is full of character art. 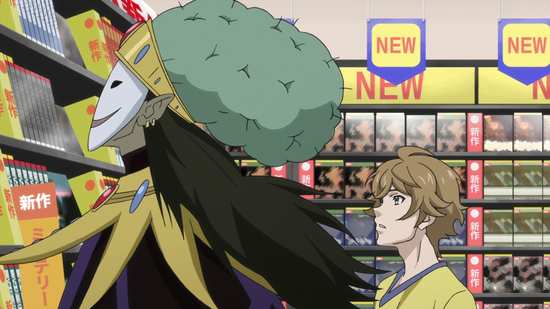 Both discs present their content with animated menus, the credits page is where you’ll find the Japanese cast and crew translated, as well as a listing of the French dub cast. The only extras on Disc 1 amount to the textless credit sequences. 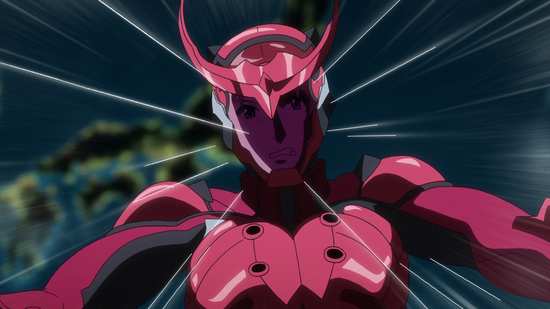 You might be wondering why I have this is my collection. You might be wondering why I shelled out money for this show, given my obvious feelings for it, if you look at the score and nothing else. Let’s face it; Samurai Flamenco is a train wreck, a nail in the coffin for Manglobe who produced it. Yet it’s a train wreck that I just can’t take my eyes off. Once I start watching the show, I have to see it through to the end. There are good shows, and there are bad shows. There are shows that are good because they are so bad, and there are shows that aim for the stars and fail miserably. But you just have to applaud the attempt. Samurai Flamenco is like the David Lynch Dune movie, the final result may be abysmal, but you have to applaud the audacity of the creators in just trying to create something like this. I by far prefer those who attempt greatness and fail, than those who succeed at mediocrity. 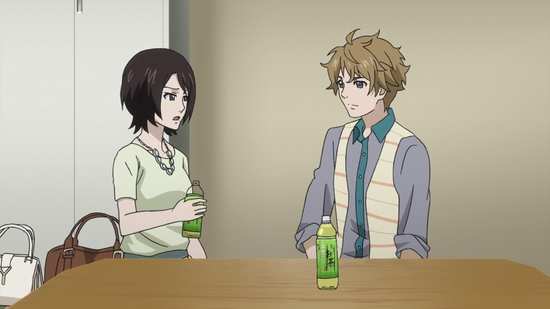 Samurai Flamenco is a short, 22 episode superhero show that goes through phases, story arcs like they’re going out of fashion. At first it’s a vigilante show, a man in a superhero costume on a push-bike fighting petty crime. It’s a comic creation on a par with Mystery Men, especially when pop idols and TV actors want to get in on the act. And then the bottom drops out of the world when the super-villains show up, with genuine superpowers. The world takes a reset, and suddenly the protagonist is part of a superhero sentai team, the Flamengers piloting a giant robot against the From Beyond super-villain group. 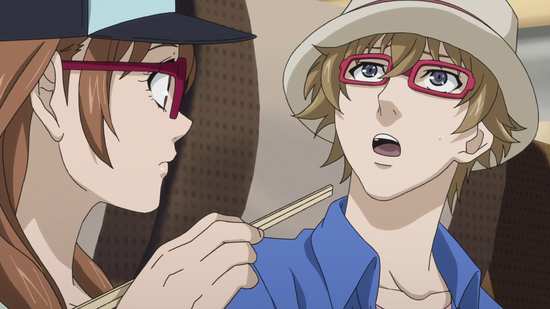 That’s where we left it with Part 1, and in Part 2 the stakes get higher as the extent of the army of villains is revealed, and increased. And then this is all flipped on its head again as the public backlash against superheroes gets stoked by the Japanese government, and our hero winds up on the run. There’s a whole new villain to defeat... And then the giant UFO and aliens show up! 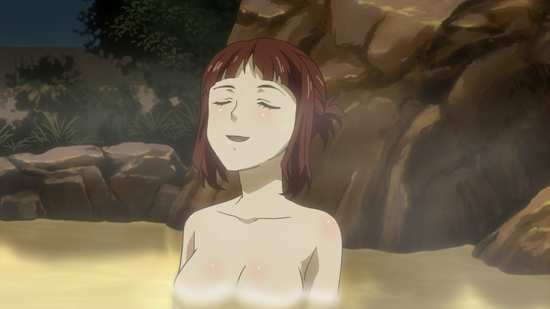 This show reminds me of Gurren Lagann, of Dragon Ball Z, in that it keeps levelling up, keeps changing the rules. Dragon Ball started off with an unlikely strong kid with a monkey tail going on adventures, and wound up with gods battling in fights that threaten the very structure of reality. Gurren Lagann began with cavemen hiding from giant robots and in the space of a couple of decades those cavemen were travelling to the stars. The thing is that Dragon Ball Z has had hundreds of episodes to develop its story, and Gurren Lagann did it in 27. Samurai Flamenco goes on its journey in 22 episodes, actually it does it in 18, as the final four episodes bring it all back down to earth again with a quieter, more human storyline that is pretty much an aggressive homage to M. Night Shyamalan’s Unbreakable. 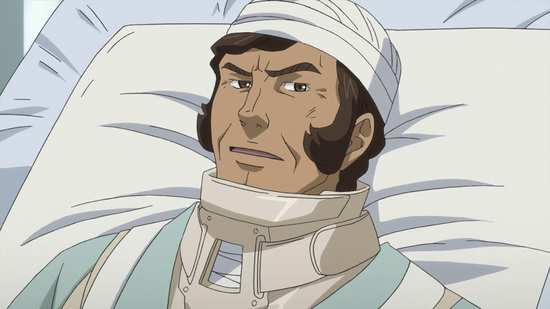 Any one of Samurai Flamenco’s story arcs would have worked standing alone as an anime series in its own right. But they are all crammed into this teeny tiny run time, and it just doesn’t work for me. Every new revelation, every new plot twist has me swearing at the TV. There’s just not enough space to empathise with the characters or get invested in their arcs. I like what Samurai Flamenco tried to do, but it’s such a shame that it just didn’t get the time it needed to let its story develop naturally. But when I feel like throwing a litany of ‘WTF!’ at the TV, and believe me that mood comes upon me with alarming regularity these days, Samurai Flamenco will be the first show that I’ll pick up.