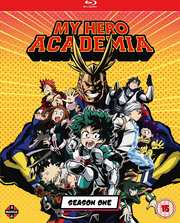 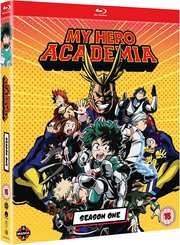 Review for My Hero Academia: Season One

I’m doing things out of sequence again, as only now do I look at My Hero Academia Season 1. It was originally released in the UK by Universal in Limited Edition format, complete with booklets and a character key-ring, but it’s sold out now. Subsequently, Sony released Season 2, and Manga Entertainment released the feature film and the first half of Season 3. Judging by that roll call, you’d guess by now that My Hero Academia is one of the more popular anime shows of recent years; indeed it might be one of those rare shows that breaks out of its niche and attracts a much broader audience. That’s something that stands at odds with the Limited Edition release of Season 1. So Manga Entertainment are doing people like me, who are late to the My Hero Academia party a favour, they’ve picked up the licence for season 1 (or rather are now owned by Funimation) and are giving it a standard edition Blu-ray and DVD release. At last I can find out how this fantastic series started. 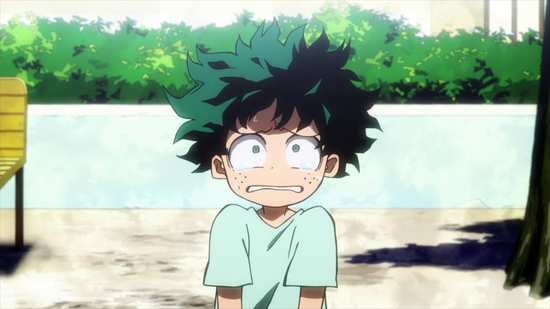 You can call them superpowers, you can call them mutations. In the world of My Hero Academia, they’re mundanely thought of as Quirks. I say mundanely, as some 80% of the world’s population have Quirks, some power or ability that makes them special in some way. Naturally there are people who use their Quirks for selfish, even illegal gain. Standing against them are the heroes, those who use their powers for the common good. 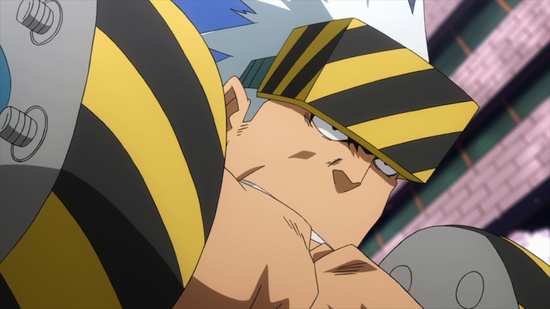 From the day Izuku Midoriya saw the world’s #1 hero, All Might in action, he was certain that he too would become a great superhero. The only problem was that Izuku was one of the 20%, born without a Quirk. It’s something he gets bullied for, picked on in school, especially by the explosive Bakugo. He even gets the chance to meet his hero All Might and ask his advice, to which he’s told to just be realistic, which hurts even more coming from his idol. But when a villain escapes from All Might’s clutches, and takes Bakugo hostage, Izuku moves without thinking to save him, and that changes everything. 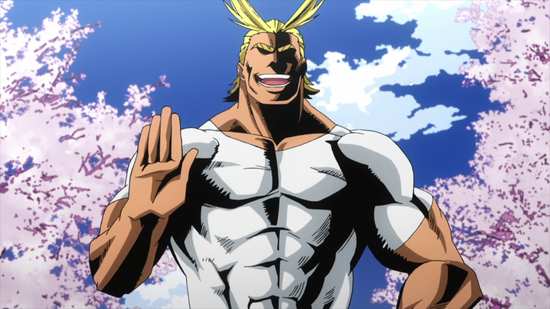 Thirteen episodes of My Hero Academia Season 1 are presented across 2 Blu-ray discs from Manga Entertainment, and there is a third disc devoted to extra features. 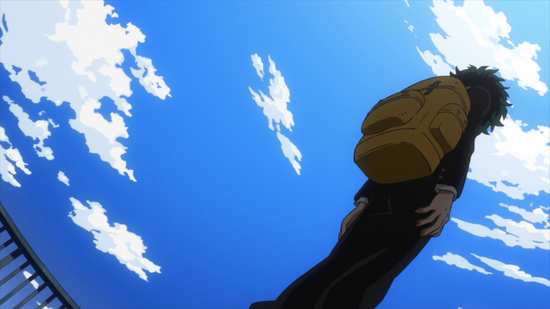 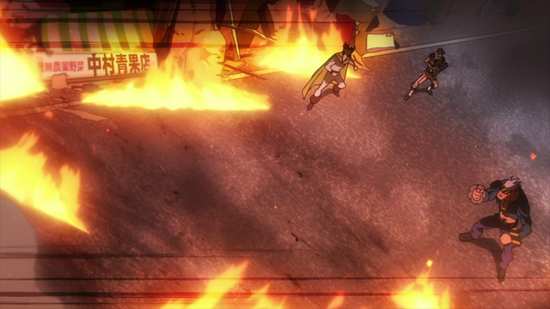 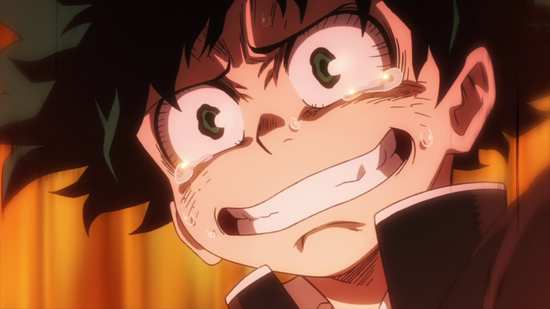 Disc 1 autoplays a trailer for Funimation NOW (the new one, indicating that Funimation have authored these discs afresh for the UK release).

Disc 2 has plenty of extras to be getting on with.

Anime Expo 2016: Interview with Kenji Nagasaki and Wakana Okamura lasts 12:48, and sees the director and producer take part in a little Q&A. 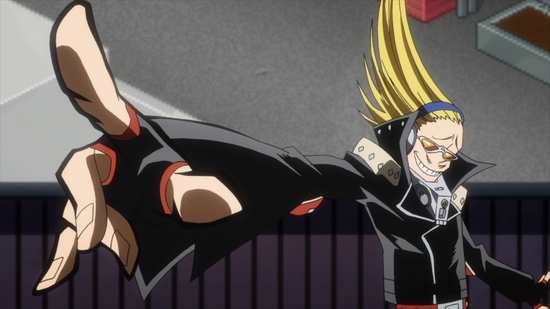 Anime Fest 2016: Interview with Ayana Nishino lasts 8:43 and is a chat with the animation director.

There are Inside the Episodes featurettes for all in this collection, 13 in all featuring the English voice actors and the Funimation production staff. They run to 76:42 in total.

There is one textless opening, two textless endings and the SimulDub trailer. 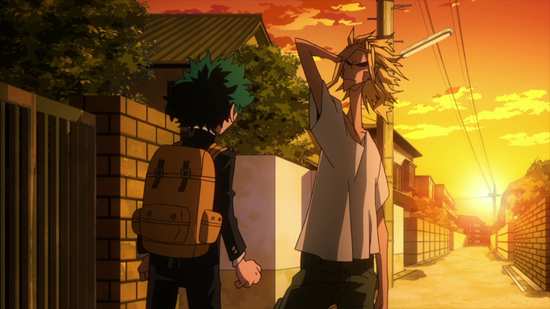 And there is a third disc. Manga only needed to release the episodes, and it’s to their credit that they released all of the disc content to go with season 1, instead of leaving this third disc as a Collector’s Edition exclusive. After all, it does cost money to press discs.

Anime Expo 2016: My Hero Academia Panel lasts 36:34 and has members of the Japanese productions staff and English voice cast on stage to promote the release with some more Q&A.

Anime Expo Interview with Christopher R. Sabat & Justin Briner is a 19:18 chat with the All Might and Izuku voice actors. 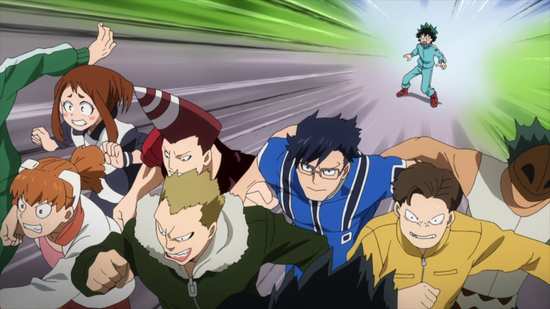 I’ve been watching and enjoying My Hero Academia since Funimation released Season 2 in the UK, and things seemed to only get better with Manga’s release of the movie and the first half of Season 3. With Season 2 beginning with a recap episode summarising the first season, I thought I had a good idea of what the show was about, and that Season 1 would be on a par with what followed. It turns out that’s just like judging Superman the Movie by watching the recap at the start of Superman II. My Hero Academia Season 1 is better, in fact it’s the best instalment of the whole series to date, and unsurprisingly, it’s because it’s the origin story. In superhero fiction, it’s always the origin story that audiences enjoy the most. Why else would comic books keep rebooting their characters? 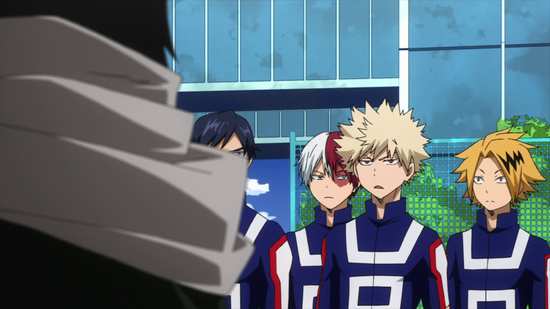 We’re introduced to Izuku Midoriya in this collection, the odd one out, the kid who’s bullied in class for being different, only his difference is normality. In a world where 80% of people have powers of some kind, he has none. Worse, as a toddler, he saw All Might in action on TV, and since then has dreamed of being a superhero, and when his friend Bakugo’s powers came in at age 4, he also looked forward to what powers he would get, only to be told by a doctor that he just wasn’t evolved enough. Sure, it’s an interesting set-up for a character, but I wasn’t prepared for just how good it was in the execution. You really do feel for Izuku, and at this point in the story, My Hero Academia is a show that can make you laugh, gives you thrills that have you at the edge of your seat, but can also tug at the heartstrings. When Izuku finally gets to meet his idol, and ask his advice, All Might’s answer to be realistic, and Izuku’s crestfallen look is enough to elicit tears. 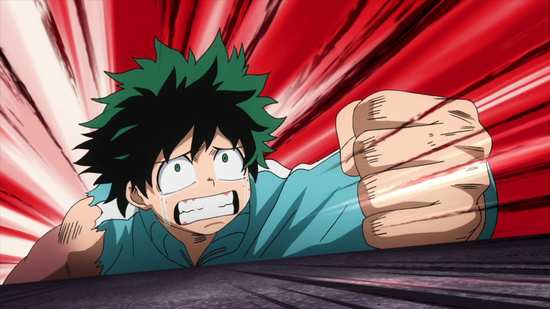 But in the end, Izuku understands the definition of heroism is less about superpowers than it is about doing the right thing regardless of danger. When Bakugo gets into trouble with a rogue villain, Izuku moves to help even when All Might has a justifiable reason to hesitate. It’s an example that moves his idol into becoming his mentor, into sharing his secret with him, and ultimately sharing his power. 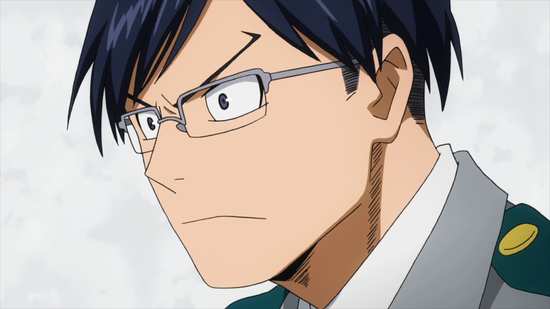 Izuku doesn’t have a lot of time to get used to his quirk; it’s so much power that his body can’t handle it, before the first term at UA High School starts, and we get to meet all the other student heroes like Iida, Ochaco, Mineta, Todoroki, and my favourite character Tsuyu Asui a.k.a. Froppy, as well as their quirky teachers. The next few episodes are spent on introducing the characters and their powers, as well as seeing them put through their paces in the first few lessons. 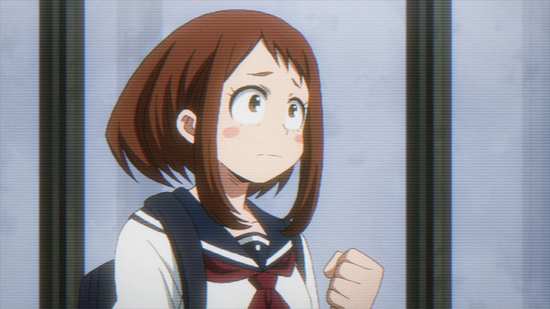 One interesting aspect of the show really played up in the first season, although not quite as prominent in subsequent episodes, is the rivalry between Izuku and Bakugo. Initially friends, when Bakugo gained his quirk and Izuku didn’t, Bakugo joined in with the teasing and bullying along with the rest of the class, but Izuku’s view of Bakugo didn’t change. Somewhere in his mind, Bakugo just came to think of Izuku as meaningless in his own ambition to become a hero. As his explosive quirk is one of the most impressive, attracting plenty of fans, Bakugo began to believe his own hype. So it was especially galling for him to be trapped by that rogue villain early on, and even worse for it to be the powerless Izuku who raced to his aid. 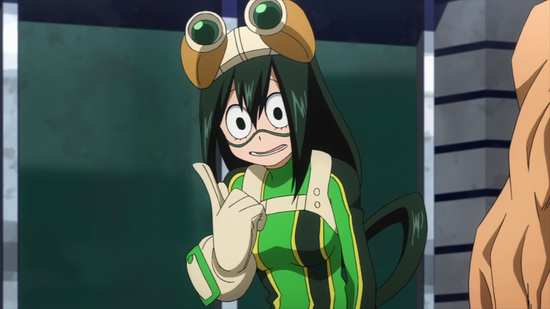 And then Izuku shows up at school, with a quirk no less, as well as an unerring ability to throw himself in harm’s way to help people. He’s being noticed, being praised, taking all of Bakugo’s glory, and it seems to him that Izuku lied to him, is lying to him about the quirk. The rivalry only intensifies during these episodes as Bakugo has to shift his perception of his friend. 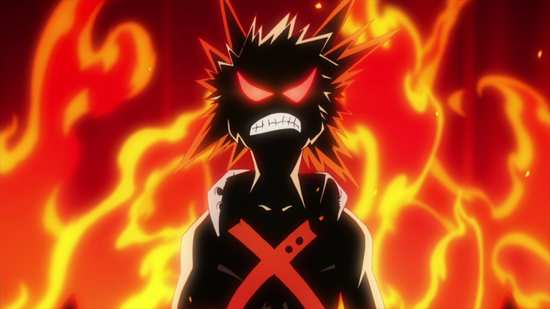 The final four episodes introduce the League of Villains, led by Shigaraki Tomura, as they lead an assault on the school during one of the class’s training lessons, in an attempt to assassinate All Might using a genetically engineered villain called Nomu. It’s the first real challenge for Izuku and his classmates, and they have to put what little they have learned to use, teaming up to fight the villains long enough for rescue to come from the professional heroes on the teaching staff. This sets into motion the story arc that takes us all the way through season 3 and beyond. 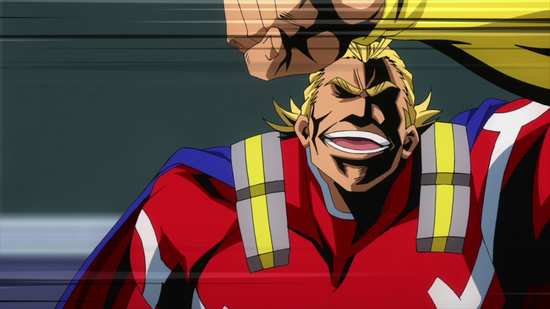 The action, the comedy, the story is all on a par with what follows in subsequent seasons, but it’s the origin story, the emotional context of the first season of My Hero Academia that really makes it stand out. It’s a dumb thing to say I’m sure, but having watched Season 1 now, I have greater appreciation for Season 2. They really do go together. You may have given Universal’s Collector’s Edition a miss due to price, or more likely storage issues, but you really do need this first season in your collection. Thankfully Manga Entertainment have given it the Standard Edition release it really needs. One wonders if they’ll go back to the other Universal Collector’s Editions and given them standard releases too, although that might be asking a little too much.