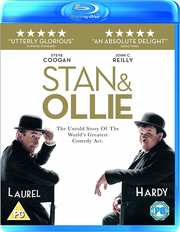 Laurel And Hardy - The Stan And Ollie Collection [DVD]
Pegasus 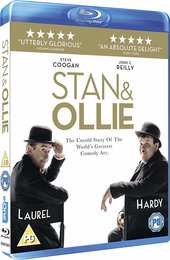 Review for Stan and Ollie

I grew up on Laurel and Hardy. My dad loves their films, and coming home from school, they’d be on right before the evening news, as the Beeb would show one of their shorts. They were massive in the thirties, and they were just as definitive in the seventies and eighties when I was a kid. So the Stan & Ollie feature film came as quite a surprise to me, not that it was made, but rather that it took so long. After all, Charlie Chaplin got an award winning biopic in 1992, and the Three Stooges got a TV movie in 2000, and it seems to me you can find biopics for many screen comedians like Martin and Lewis, Abbot and Costello. Although I was subsequently reminded of a BBC TV movie called Stan from 2006, which looked back at the career of Laurel and Hardy, as an older Stan visited Ollie on his death bed. By its very nature it was a maudlin piece which lacked much of the magic that I associate with Laurel and Hardy.

It’s BBC Films that are behind the Stan & Ollie feature film, but this time they create a film which is a lot more light-hearted and magical a look at the boys, maybe not in their prime, but still at the height of their powers. Perhaps the hardest thing about creating a Laurel and Hardy biopic is casting the iconic roles, and that might be what took them so long. Maybe with Stan & Ollie, they’ve got the right actors for the roles.

In 1937, Laurel and Hardy were at the top, the most loved comedy double act in the world, making probably their best known film, Way Out West. However, behind the scenes, things weren’t so rosy, with Stan Laurel chafing under Hal Roach’s control and inequitable contracts. In 1953, with double acts like Crosby and Hope, Martin and Lewis, Abbot and Costello filling the cinemas, Laurel and Hardy were almost forgotten. With a view to reviving their flagging film career, they embarked on a tour of Britain and Ireland, but they still had the baggage of what happened sixteen years previously to deal with.

The film gets a 2.40:1 widescreen 1080p transfer on the disc, with DTS-HD MA 5.1 Surround English audio. There is also a DTS-HD MA 2.0 Stereo English audio descriptive track, with optional English SDH subtitles. I can’t really nitpick the transfer, as it’s clear, sharp and colourful, rich with period detail, and untouched by compression artefacts or banding. It’s a digitally shot film which still works a treat when it comes to contrast and dark detail. The dialogue is clear, while the surround is put to use conveying the ambience of the film. Digital effects are used profligately to create a period look to the film, although nitpickers have gone to work documenting anachronisms on the IMDB goof page. I was more concerned with the actors, as Laurel and Hardy’s voices were so iconic (one reason Chaplin might have been an easier film to make might be because he was a silent movie star). Steve Coogan is a gifted mimic, and he manages to capture Stan Laurel’s tone well. John C. Reilly is just as adept at Oliver Hardy’s speaking voice, but he can’t match the latter’s dulcet tones when it comes to singing.

You get one disc in a BD Amaray with an o-card slipcover that repeats the sleeve artwork.

The disc autoplays with trailers for Where’d You Go, Bernadette?, and On The Basis of Sex before booting to an animated menu.

There are a handful of short featurettes on the disc.

The extras are rather cursory and disappointing, and even the Deleted Scenes merely show extended scenes (complete stage performances without cutaways) rather than any new footage or story beats.

Charlie Chaplin was the master of his own destiny, a savvy businessman who owned his own movies and kept full creative control. So when he became the biggest movie star in the world, he was able to consolidate that into a lasting legacy. Laurel and Hardy on the other hand were under contract to Hal Roach studios; they didn’t own their films, and just like the Carry On movies, it was the producers and the studios that made the money, not the stars. The film’s prologue set in 1937 shows the result of this, with Stan Laurel wanting that control, but with Oliver Hardy rather not wanting to rock the boat, and with Hal Roach taking advantage of that, playing his top stars against each other. Laurel wanted to jump ship and sign with Twentieth Century Fox, but Hardy didn’t want to break his contract, and that led to Hardy making a film with Harry Langdon to fulfil his contract, a one off, but something that Laurel saw as a betrayal.

That’s the mood with which we pick up the story 16 years later, as the duo embark on a theatre tour to gain the publicity and funding to re-launch their film careers. This is something of a little dramatic licence in the film, as it implies that their partnership stalled in the intervening years, and the resentment sort of festered. The facts are that they made five more films for Hal Roach until 1940, a film for RKO, and they were working constantly for Twentieth Century Fox until 1945, another seven films culminating in The Bullfighters plus one for MGM. However the subsequent eight years were fallow with only their last film, Atoll K made in 1951.

It does feel as if they’re rekindling their friendship and partnership at the start of the story, a theatre tour under the auspices of impresario Bernard Delfont, although he’s investing his time and efforts in younger talents like Norman Wisdom. Laurel and Hardy get a quiet welcome, a cheap hotel, and a small theatre with mostly empty seats to perform to. But the magic is still there in their act, and their friendship, and the film uses the trick of recreating certain iconic film scenes to remind us of them at their best, whether deliberately as the characters play to the crowd, or as in one delightful scene in a railway station, purely accidentally.

It’s a slow build at first, but as they put some effort into publicity, their renewed fame grows, and the crowds at the theatres get larger, the theatres get larger too. There is an added layer to the comedy when their wives Lucille and Ida join them, and they have a sardonic byplay that rivals their husbands’ onstage slapstick comedy. Everything seems to be coming together, but there is still that lingering issue from the Hal Roach days, there’s Laurel’s attempts to get a film deal together, and his choice to not tell Hardy when he runs into problems with the producer, and finally there are Hardy’s health issues. This all leads to the moment where their comeback is jeopardised unless they can resolve all this, the dramatic arc to the film.

Stan & Ollie works because it really captures the characters we know so well, while revealing the lives that we didn’t know about, telling an emotionally effective and well put together story. That Stan & Ollie will make you laugh goes without saying, but it will also elicit tears as well, as it tells this tale of friendship and love that was even stronger in real life than it was on screen. It also effortlessly captures the magic of film comedy’s first and greatest double act. It may start off slowly, but by the end of the film, I was utterly entranced and loving every minute of it. Steve Coogan and John C. Reilly are Laurel and Hardy.