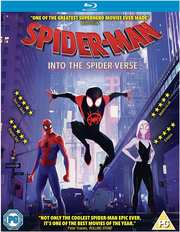 Spider-Man Into The Spider-Verse (Blu-ray Details)

Other Reviews, etc
Places to Buy
Spider-man Into The Spider-Verse [DVD] [2018]
Sony Pictures

New: £20.51
Spider-Man: Into The Spider-Verse Limited Edition [Blu-ray]
Not available

Spider-Man: Into The Spider-Verse [Blu-ray]
Not available

New: £44.99
Spider-Man: Into The Spider-Verse - Exclusive Steelbook
Not available 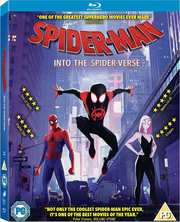 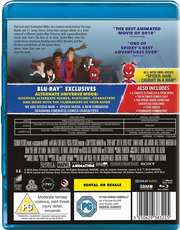 Review for Spider-Man Into The Spider-Verse

I don’t actually have that many Academy Award winning animations in my collection, despite my love of the medium. Since my tastes wander towards anime, there are very few that have won awards in the West, and I do have Spirited Away on my shelf. It’s the narrow focus of animation in the West that puts me off. They are all family oriented productions, and they have to have jokes and characters cracking wise. I always think that they have writers’ rooms full of gag-smiths coming up with one-liners, and some poor schmo at a desk by himself writing the story. There’s a homogeneity of humour that I have come to expect from US comedies that leaves me predicting dialogue for certain scenes before it happens, and I usually get it right. But I thought I’d give this year’s Oscar winner a try, as I’ve only heard good things about Spider-man into the Spider-verse. Besides, Spider-man is a master of wisecracks in pressure situations. And this film has seven Spider-men. Frankly, a room full of gag writers will be hard pressed to keep up.

There’s only one Spider-man, or so you might have thought. Peter Parker dons the red Spandex and keeps the streets of New York safe, so Miles Morales only concern is starting at a new high school, and trying to remain cool and stylish in the face of an affectionate policeman father who insists on giving him a lift to school in his patrol car. His Uncle Aaron is cool though, and knows the best places underground for Miles to show off his graffiti art. Only there’s a strange spider down there that bites Miles, and then his life starts to change.

It changes even more the day he gets caught up in a fight between Spider-man and Green Goblin beneath the city. Kingpin is trying to open a dimensional portal, and that could have dire consequences for the city. Things go wrong, and Miles is left with the responsibility of shutting down Kingpin’s plan, and he’s not even used to his new powers. But help is at hand. The dimensions have already cracked, and suddenly a handful of Spider-men from different realities are in Miles’ world, and some of them might even help him, if he can persuade them.

You might have seen me complain about banding on anime discs often enough to wonder if it was a common issue with animation on Blu-ray. The Spider-verse movie puts that fallacy to rest with an impeccable presentation in HD on this disc. You get a 2.39:1 widescreen 1080p transfer which is clear, sharp, detailed and rich with colour. There is no visible compression, the animation is smooth, and absolutely no banding either. You have the choice of DTS-HD MA 5.1 Surround English, and DD 5.1 Surround Danish, Finnish, Swedish, Norwegian and DD 2.0 Audio Descriptive English, with subtitles in these languages plus Polish. The audio is great in bringing across the action, and the film’s cool music soundtrack, while keeping the dialogue clear, although the overall volume is a little low. The CG animation is accomplished with a comic book feel that really bridges the gap between print and film, a blend of quirky animation styles that reflect the various Spider-men, ranging from CG to Noir, Looney Tunes to anime.

You get one disc in a BD Amaray with an o-card slipcover. The disc autoplays a trailer for Hotel Transylvania 3, and Sony have authored the disc to autoplay the extra features after you have watched the movie.

The disc also boots to an animated menu with all the cool bits from the film.

From the Play Option, you can choose to watch the film in Alternate Universe Mode, bookended by pieces from creators Phil Lord and Chris Miller. This lasts 143:31, and offers another look at the film with alternate scenes, deleted and extended scenes as well. This being an animation, the additional content is in various forms of completion, from storyboard to deleted footage, via animatics and pre-rendered footage.

You get a filmmaker’s commentary from the directors, writers and producers.

“Caught in a Ham” Short animation is a Looney Tunes style prequel to the film featuring Spider-Ham, which lasts 4:01.

We Are Spider-Man lasts 7:51 and the creators talk about doing the Miles Morales story, and also the other webslingers in the film.

Spider-verse: A New Dimension runs to 5:09, and looks at the animation style for the film.

The Ultimate Comics Cast lasts 15:02 and you get to see most of the voice cast interviewed.

Both of these featurettes look at the design of the characters and how they differ from the comic book versions.

A Tribute to Stan Lee and Steve Ditko lasts 8:34.

The Spider-verse Super Fan Easter Egg Challenge (5:02) offers some of the little gifts in the film, promising many more for the eagle-eyed.

There are two Lyric Videos which run to 5:48.

Finally you can see the preview for Hotel Transylvania 3 again.

In this age of collected narrative universes and crossover movies, it’s nice to watch a superhero movie that stands happily alone, and does its own thing. That’s probably ironic given that Spider-man into the Spider-verse is probably the biggest crossover superhero movie ever. It’s just that all the crossing over happens in its two hour runtime, with no reference to any other movies, prequels or sequels; well almost no reference as the film kicks off with a montage sequence and gag that definitively refers to the Sam Raimi Spider-man trilogy in a way that makes its sense of humour apparent and demands that you stay on board for the ride.

The Miles Morales story makes for an interesting Spider-man origin story in this film, as it doesn’t need to re-hash the orphan Peter Parker, Uncle Ben, great responsibility origin, and can instead do something different. Miles Morales is a kid from a stable family, a loving mother and father, although with an uncle who’s something of the black sheep of the family. So when he gets bitten by the radioactive spider, he’s not thrilled or motivated to use his powers for fighting crime, doing good. It’s only when the Peter Parker of his world is unable to fight that the burden falls upon him; and it really is a burden for a kid who would much rather just go to a normal school, and maybe have some fun with graffiti art. He certainly doesn’t have the experience to take on the mantle of Spider-man.

Luckily he has some good teachers, albeit through the machinations of the villain, Kingpin. Kingpin is trying to break through to other dimensions, although he has a goal that’s easy to empathise with, despite the likely mass death and destruction that will result. The hole in dimensions has pulled Spider-men from other realities into Miles’ and so he has a middle-aged Peter Parker, Gwen Stacy, a noir-Spider-man from the thirties, Peni Parker (a girl who pilots a spider-robot), and yes... Spider-ham to lend their advice and act as role models. The problem is that the dimensions are unstable, and if they don’t get back to their own realities in time, they will cease to exist. The door has to be closed from this side, and Miles would be the logical one to do it, but he’s nowhere near ready.

I’m really impressed with how the various animation styles work together, with an overall CG look to the world of Miles Morales, carrying through to the older Peter Parker and Gwen Stacy characters. It’s logical then that most of the character development comes from interactions between these three, with the older man acting as a mentor, while Miles’ relationship with Gwen has a more romantic element to it. But against this you have the dark noir style, the Looney Tunes mayhem of Spider-ham, and an anime aesthetic for Peni.

Spider-man into the Spider-verse is fast-paced, action packed, has a great sense of humour and a great deal of heart as well. It’s probably the best Spider-man feature film I’ve seen to date, and given that the character has been in some nine feature films to this point, that’s quite an achievement. I’m probably preaching to the converted, given that this film won the best animation Oscar, but if you’ve missed this film, it’s well worth giving it a chance.

Have to say, I really enjoyed this. I loved that they just ignored everything that came previously and just did their own thing.
posted by Si Wooldridge on 17/7/2019 18:57