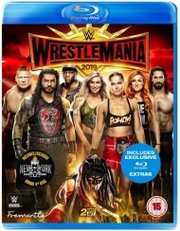 Wrestlemania 35 was one of the most satisfying Wrestlemanias I have seen in a long time. It is true that the build has been less than satisfying, but I predicted when the card was final that this would either be the most satisfying event or the worst... there would be no in between. it is true that if you actually sat through the entire event, Kickoff-show and everything it was very long, but when the dust settled on this event, I left with a smile on my face and that is the most important thing.

Roman Reigns against Drew McIntyre was fine and I had no real issue with the match or outcome. It was a strong, hard slugfest and that's what I expected. The Falls Count Anywhere match between Shane McMahon and The Miz wasn't as insane as I thought it would be and at this point I feel like Shane just plays his greatest hits (literally in some cases) and that is fine.

Bobby Lashley put his Intercontinental Championship up against former champion Finn Balor. Instead of teasing it, they outright said he would be appearing as The Demon and so I feel this surprise was ruined. However, the match between them was great and just a shame that it was another flipflop of a title. Randy Orton against AJ Styles was a surprisingly good match. I had no expectations for this match and I think it exceeded more than I could have imagined and if these two ever get their hands back on the gold then I would be happy for them to fight over it.

The US Championship match between Samoa Joe and Rey Mysterio was too short and by too short I mean in the time it has taken me to write this, the match was over. I'm all for BAM Impact wins, but not at Wrestlemania and not especially by these two who we know could put on a clinic. Speaking of 'putting on a clinic' this is not what we got from Kurt Angle in his 'Farewell Match' against Baron Corbin. It felt a little by the numbers and I have no issue with the outcome, it was more about how the match was in general, just didn't feel as special as it should have been.

There are two Fatal 4-Way Tag Matches. One for the Women's Tag Team Championships with Bayley and Sasha Banks defending against The IIconics, Nia Jax and Tamina and Natalya and Beth Phoenix and the other for the Smackdown Tag Team Championships with The Usos defending against The Bar, Rusev and Shinsuke Nakamura and Ricochet and Aleister Black. Now I will say what I always say: Unless it's Elimination-style, these matches make no sense. Why would you ever tag out? Why would you not just have both members of the same team tag in, one pin the other and then the team wins? The match makes no sense. However, both have some great moments, but I just can never get over how stupid the concept of the match is.

The No Holds Barred match between Triple H and Batista was a waste of time and possibly one of the most disappointing by either of them. It was just given far too much time for a match that could have been done so quickly. It is sad when you consider how well these two have worked together in the past.

The Universal Champion Brock Lesnar against Seth Rollins was fantastic and I don't care how long it was. Yes, technically it was only a few minutes long, the difference is... the ending was what we wanted. It is what we had wanted for many months and seeing Seth Rollins holding that belt gave me hope that WWE would put their rocket behind a champion who would actually defend it more than a dozen times a year (if we were lucky with Lesnar).

The WWE Championship match between Daniel Bryan and Kofi Kingston was again fantastic. I was so surprised as I did not expect both belts to change and I certainly did not think that WWE would finally give the rub to the person who clearly deserved it. I found this match and the build to be fascinating and yes it was a rehash of Daniel Bryan's storyline from Wrestlemania 30, but it was just perfect.

Finally, we have the first ever women's Wrestlemania main event. Now, I have my problems with the build and the fact is that Charlotte should never have been in the match in the first place, but when all is said and done, this match was exactly what it needed to be. Ronda Rousey defending her Raw belt, Charlotte defending her Smackdown belt and The Man Becky Lynch facing off was just amazing. It is true that the ending was a little messed up, but you can understand why when you hear the stories behind it. All in all a satisfying end to a very enjoyable Wrestlemania.

BUT... and this is only a small but, my only issue with this event, besides a few of the matches was the length and the amount of unnecessary sections. Apart from Elias and his interruption by John Cena in his 'Doctor of Thuganomics' gimmick, which was amazing, everything else felt a little pointless and utterly skippable. The dance break? Hulk Hogan getting the name of the building wrong again? Even the Hall of Fame felt a little laboured, but thankfully you can fast forward through these and get to the next good bit, which was more or less everything else.

Included on the two disk set includes the Kickoff Show matches WWE Cruiserweight Championship Match between Buddy Murphy and Tony Nese which was a great match. I was shocked they did not give Murphy his Wrestlemania moment as he had been a great champion, but this was a fantastic match. The Women's Battle Royal could have been good and really should have been. Instead it was just an excuse for WWE to show the women's division, but such a shame that the ending was so disappointing.

The Raw Tag Team Championship between The Revival and Curt Hawkins and Zack Ryder was a good match and the ending was nice, just a shame it wasn't on the main show to give it more of a spotlight. Finally, we have the Andre the Giant Memorial Battle Royal which, much like the womens' just felt like throwing every superstar they have out there to see what happens. This was again fine, just nothing special and the winner was expected, but I did want something different.

Also included is the entire Raw which followed Wrestlemania. Unsure why they didn't include the Smackdown too as that would have made more sense or a highlights from both shows. As with all post-Mania Raw's it was a lot of celebrating, boasting and generally I'm fine with that.

Matches include a rematch between The Revival and Hawkins and Ryder for the Raw tag belts which I think was actually better than the one from the night before. Bayley against Alexa Bliss in her return match which was fine and they worked well together. There is a great tag match between Ricochet and Aleister Black against Bobby Roode and Chad Gable .

Dean Ambrose has his last match in WWE against Bobby Lashley. I kind of wish this had been against Roman Reigns or Seth, but this was fine, if a little unmemorable and should have had a definitive ending. There is a fantastic match between Finn Balor against a returning Sami Zayn for the Intercontinental Championship though I'm still unsure whether Sami's trip on his entrance was intentional or not, but his promo was great as always.

There is a fantastic build to a 'Winner Take All' Match between WWE and Universal Champions Seth Rollins and Kofi Kingston which doesn't actually happen (sort of) and becomes them against The Bar which I feel they should have built this to a PPV match. Still a good match.

We also get the first hint at the Firefly Fun House. Elias concert which is great as always and punched perfectly by an appearance of The Undertaker. Baron Corbin celebrating his win, The Man Becky Lynch celebrating and then the lead into her next feud which was pretty well handled. There is also a special Farewell to Dean Ambrose from Seth Rollins and Roman Reigns. This was a nice moment and certainly a better way to send him off. If you bought the online version you will also get an extra disk for NXT New York event which was fantastic if you want to see some amazing bell to bell wrestling.

I loved this Wrestlemania. This is one of the few where when I got the Bluray I actually sat and watched the whole thing over again instead of just skipping to the good bits. None of the matches were horrible. Even Batista and Triple H had its moments and the whole set felt like what a Wrestlemania should be. For the first time in a long while this felt like watching the grandest stage of them all and I urge everyone if you haven't watched it do so.