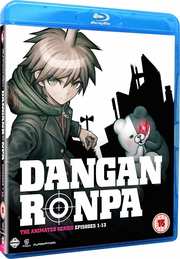 Why did I buy this again? There it is, on my to-watch pile, plaintively calling to me that it’s high time I put it through the Blu-ray player. It appears that it’s down to the last thing that I write in a review being the only thing I recall. When I reviewed Danganronpa on DVD, the last thing I wrote was that the visuals in the show demanded an HD presentation. It must have been the mental note tickling me in the hindbrain when the Blu-ray appeared in a sale a few years back. I can barely remember the show at this point, other than the minor fact that it’s based on a videogame, and that it’s apparently garnered enough of a fanbase to spin off a sequel anime series or two. 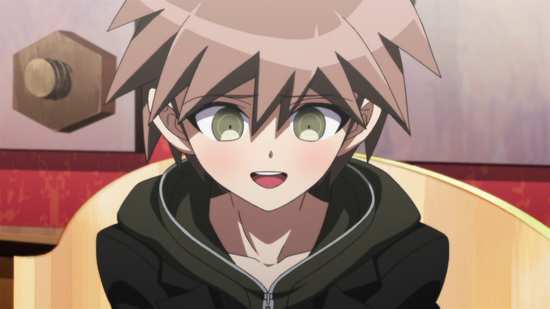 Then I re-read the blurb on the back of the case. Fifteen kids in school can never leave until they murder one of their number. It’s Battle Royale again! Death games as entertainment have been a thing since the gladiators of ancient Rome, and entertainment about such things is almost as old. We’ve had The Running Man, the Saw franchise, plenty of films where people are forced by external agencies to fight to the death against each other for someone else’s enjoyment, but it was the Japanese with Battle Royale who first put teenagers into that predicament. It took its time but the floodgates have finally opened in the west with movies like The Hunger Games and Maze Runner. Such stories abound in anime too, with Btooom! and Deadman Wonderland two recent examples, so Danganronpa isn’t exactly a memorable entrant in a well-subscribed sub genre. Maybe a second viewing will give it more impact. 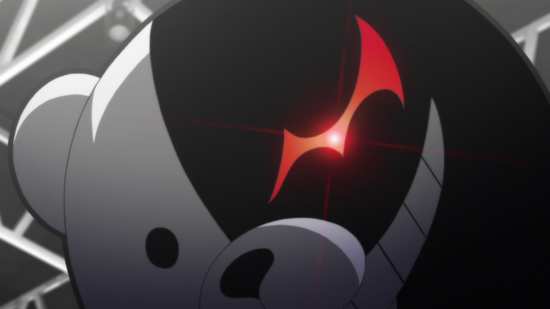 Makoto Naegi thinks he’s got it made. He’s just won a lottery. Not the kind that gives cash, but the kind that guarantees a future, or so he thinks. He’s just got a letter offering him a scholarship into the elite Hope’s Peak High School, a government sponsored Academy that tutors the best of the best, those that will become the shining lights of the nation upon graduation. Only when he steps over the threshold, he’s leaving his life behind in a more literal sense. This school is less about hope, and more about despair. He’s sealed in there with no way out, one of fifteen rather oddball students, hardly the elite, and there are no teachers, no lessons. 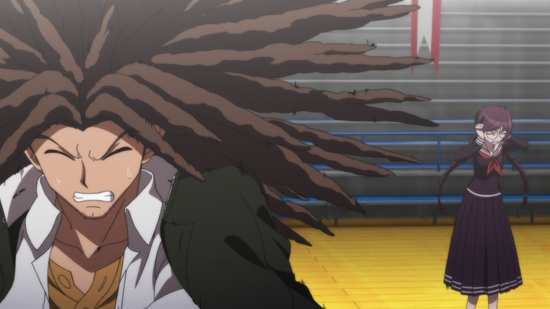 There is a black and white robot bear though, named Monokuma, and Monokuma tells them that the only way to graduate this school is to commit murder and to get away with it, either that or die. The bear has an elaborate game planned, murders to be followed by investigations and trials, and the students get to be judge and jury, victims and criminals, although Monokuma will keep the position of executioner for himself. On top of that, breaking the school rules results in capital punishment too. That’s not the kind of game that any sane person would play, but Monokuma offers the students incentive in that regard as well. 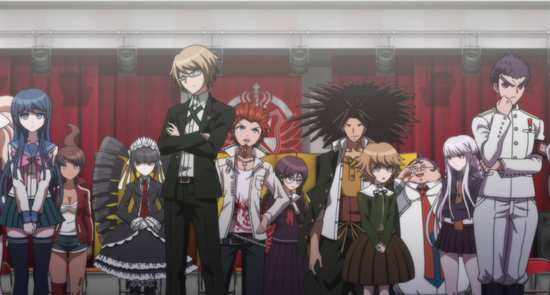 13 episodes of Danganronpa: The Animated Series are presented across two Blu-rays from Manga Entertainment. 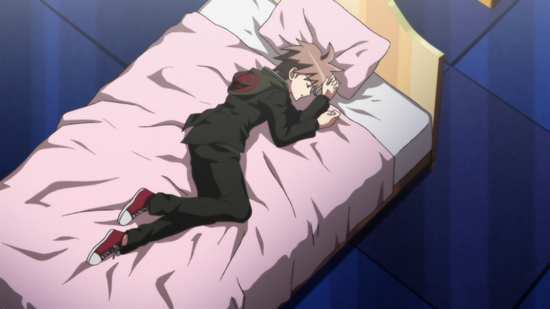 What does Danganronpa have in common with Star Trek VI: The Undiscovered Country? The blood is bright pink in both to save broadcaster/censor sensibilities.

Danganronpa gets a 1.78:1 widescreen 1080p transfer on these discs. The image is clear and sharp throughout, with strong bright colours (particularly the neon pink), and the playback proceeds with no obvious issues such as compression or aliasing. I was expecting good things from the Blu-ray compared to the DVD, and certainly the smoothness of the animation, the vivid colours are a big improvement. However, the show looks like one of those shows animated at somewhere between 480 and 1080 and then scaled up. Detail levels don’t exactly zing and there is a smidge of digital banding, noticeably on scene fades. 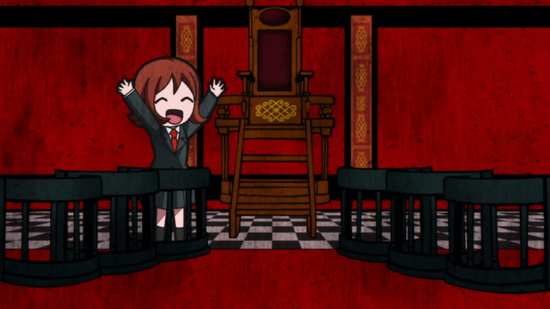 Still, Danganronpa really is a striking animation. The character designs are extremes of their character stereotypes. The main character is the usual ineffectual teen male, so he’s short and mousy. The biker is the uber-biker; the butch wrestling chick looks like something out of Fist of the North Star, the nerd is obese, with greasy hair and thick glasses, and so on and so forth. It’s all pushing things just beyond the limit, but it works well. The world design, this particular death school comes across with impact, while the animation style will switch for each execution sequence, getting even more stylised, almost like 2D puppetry. As for Monokuma, the evil bear proxy at the heart of the nightmare, now we know what Pudsey Bear is actually like beneath the eye-patch. 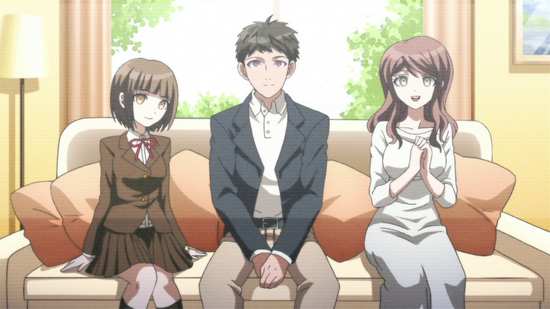 Danganronpa offers the choice between DolbyTrueHD 2.0 English and Japanese, with player locked subtitles and a signs only track. There are no problems with the audio, the dialogue is clear throughout, the music suits the tone of the story well, and the action gets fair presentation in the stereo format. The subtitles are accurately timed and free of typos, although this may be one of the shows where pause gets a fair bit of use for the sake of on screen text captions. I gave the dub a try to ensure that it exists, and I wasn’t compelled to switch it off during the minute or so that I gave it, so it can’t be bad. 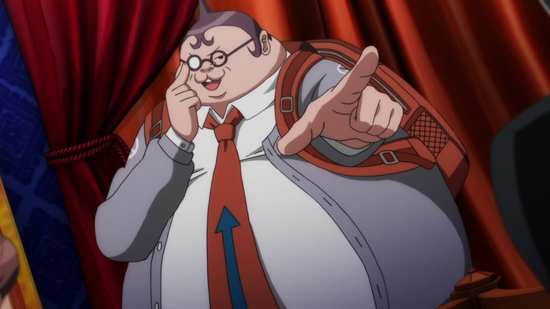 These appear to simply be the Funimation discs recoded for Region B, no Manga logo at all. The discs present their contents with animated (dancing bear) menus, with each episode getting a couple of pages of translated credits after they end. There aren’t any next episode previews though.

Disc 1 autoplays a trailer for Future Diary (released in the UK as Mirai Nikki).

The only extra is the typical Funimation audio commentary on episode 1, with ADR Director and voice of Hagakure, Christopher Bevins, Bryce Papenbrook (Naegi), Felecia Angelle (Asahina), and Tyson Rinehart (Yamada). Note that this contains spoilers for the entire series. 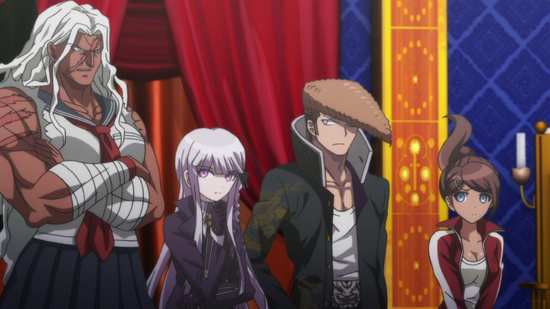 Disc 2 autoplays with a trailer for Tokyo Ghoul, and you’ll also find the US trailer for Danganronpa, and further trailers for Riddle Story of Devil, Deadman Wonderland, Noein, Eden of the East, Black Lagoon, and Buddy Complex. 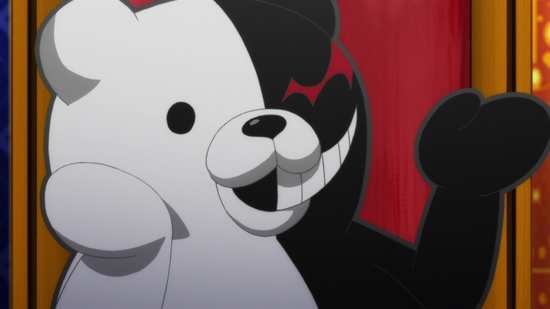 As I watched Danganronpa for the second time, I thought to myself it must have been a hell of a sale, as this isn’t the first show I’d think to double dip on. Then I remembered the day of the Amazon price glitch, where I picked up 6 Manga Blu-ray releases for less than £40. Ah, those were the days! It explains why I succumbed to the glee and added Danganronpa to the basket. It certainly isn’t a show that improves with repeat viewing. 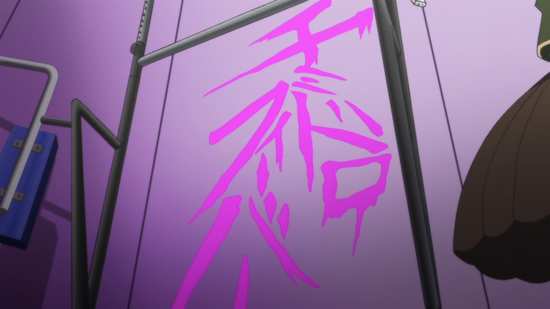 Danganronpa is apparently based on a PS Vita videogame, hence the qualifier of “The Animation” in the title. Since I’ve long since given up twiddling my thumbs for electronic entertainment, I have no idea how this animation fits in with the game, whether it adapts it, complements it or is a sequel to it. However that knowledge does explain the way the anime is structured, as its regimented and formulaic storytelling style very much has the smell of videogame origins about it. This more than anything is a major flaw in the show, one that some might consider fatal. Once I got used to it however, I did manage to eke some entertainment out of Danganronpa. 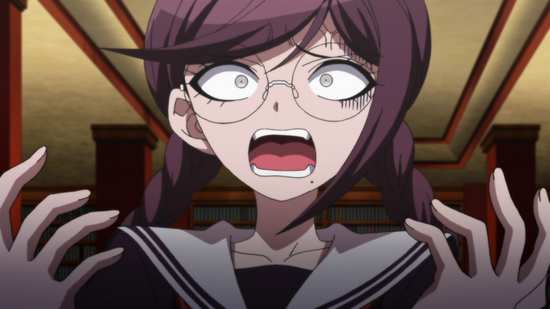 It’s not just a dystopian death game in the vein of Battle Royale or Incite Mill, although a key element of the show is the fifteen students trapped in high school with a psychopathic robot bear, and compelled to kill each other in the hope of escaping their predicament. But the game elements of Danganronpa also include investigation of crimes and trials of the accused. That results in the (Not) and Not repetition in the episode titles. The (Not) episodes usually comprise character moments, some goofing around, some testing of the limits of their prison, before a corpse is found, one of their number. The Not episode immediately after will show the survivors investigating the crime, before Monokuma calls the students to order to debate the crime and determine the guilty party, before said guilty party is despatched in a novel and graphic execution sequence.

It’s the formula that is the undoing of Danganronpa. There’s not enough time to get to know the characters, or the characters to get to know each other, especially at first where there are 16 of them including the bear, and you don’t even get to know some of their names before they depart this mortal coil. It’s only towards the midpoint of the series that they’ve been whittled down enough to get enough screen time, and develop their relationships. The investigations too are just highlights packages, investigation montages, and if you’re watching the show to play along with these obnoxious teen Columbos as they seek out the murderers, then you’ll never get the clues or the time to figure them out either. The same goes for the trials, which are over almost as soon as they begin. 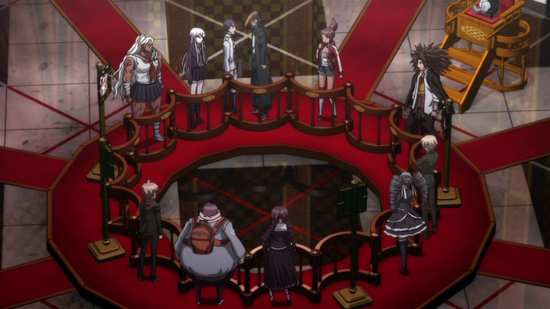 Danganronpa’s one saving grace is the characterisations, although it’s more appropriate to call them archetypes, caricatures even. The students are presented as the ultimate in their fields, the super high school level detective, the swimmer, the wrestler, the biker, the fortune-teller, the idol and so on. Not only in physical appearance, but in performance too are the characters pushed to the bounds of credibility. They’re ridiculously over the top, but in the world of Danganronpa, any kind of subtlety would be misplaced. Although I do have to wonder how any psychotic Japanese female mass-murderer can speak without biting her tongue off, or without drool dripping. It’s the insanity of the characters that hits with the impact of Naegi’s verbal bullets (the show has some daft visual ideas and it runs with them), and it alone makes you keep watching right to the end, however much the show’s structure serves to disappoint. The ending might be a bit of a letdown too, with a wholly contrived series villain. 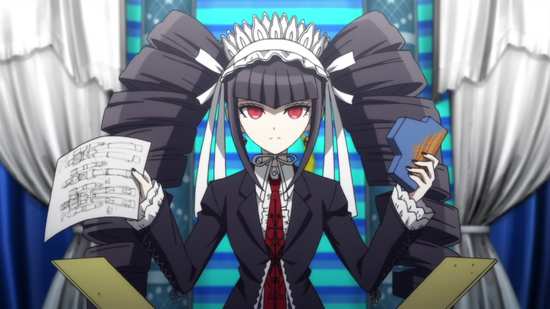 This second time around with the extended final episode, all I could take from it, was that after the mastermind villain was revealed, they spent half the remaining time explaining their motivation, a positively deflating 15 minutes following what should have been the emotional climax of the show. It wasn’t long before I was snoring. Danganronpa is another case of anime style over substance. Naturally this is what fans go for, as since my first viewing, they’ve made a sequel anime.