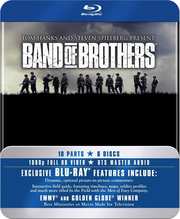 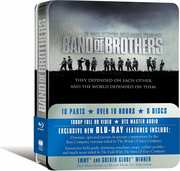 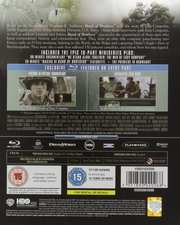 Review for Band of Brothers - The Complete Series

My grandfather served in World War II. He was in the Indian Air Force, from which he went on to retire as Warrant Officer. He went on bombing missions against the Japanese over Burma during the war. He was in the back of the plane, ensuring that the bombs were dropped when and where they were meant to be dropped. And I knew none of this when he was alive. That’s one of the drawbacks of living thousands of miles away from your extended family. I only met him a few times, really only spent an extended period with him once for a few weeks. And at the time, I was of an age where World War II was something on TV or in the movies, and I was more inclined to ask him for sweet treats and presents. It was much, much later that I did the math and thought to ask my mother, when I learned something of what he had done during the war. But I always regret that I never had the chance to learn from him directly. 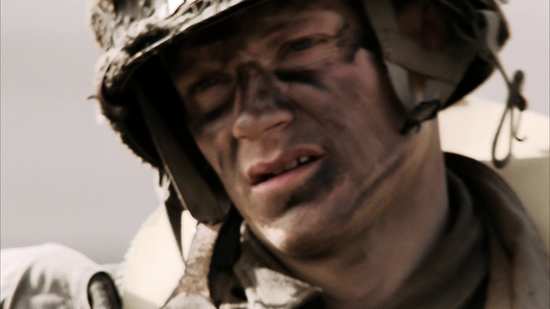 My grandfather died relatively young, but we are now approaching that time when just like World War I a few years ago, World War II will pass from living memory. We’re quickly losing the chance to learn about this last global conflict directly from the veterans who served in it. While the Second World War was perhaps the first conflict to be documented extensively on film, firsthand accounts are not as forthcoming, understandable given the reticence some may have in talking about these things. So in 2001, Band of Brothers came as an epochal moment in television, a mini-series that had just as much impact as Roots, more so even. Band of Brothers is a true story, dramatised for television with feature film production values, and reinforced by first-hand accounts from the real-life veterans whose experiences were dramatised. It was always my intention to own the Band of Brothers boxset, but such an intense viewing experience isn’t one that I care to repeat lightly. By the time I got around to buying it, it had been released on Blu-ray, and I’ve waited quite a few years before finally putting the first disc in my player. 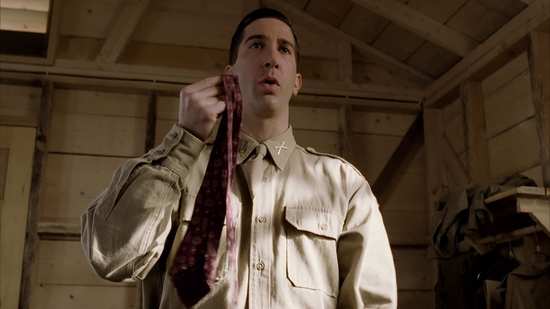 Band of Brothers tells the story of Easy Company of the 2nd Battalion, 506th Parachute Infantry Regiment, part of the 101st Airborne Division. They parachuted in behind enemy lines on D-Day to support the Normandy landings, and went on to take part in Operation Market Garden, the Battle of the Bulge, and eventually capture Hitler’s Eagle’s Nest. 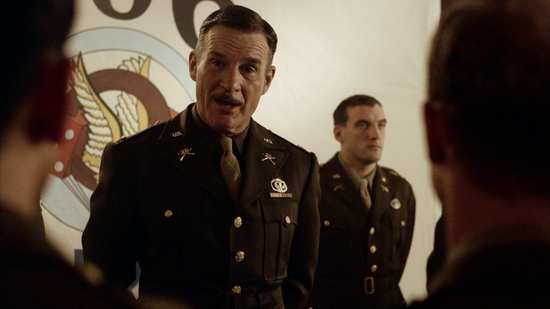 The ten episodes of Band of Brothers are presented across 5 Blu-rays, and a sixth disc is devoted to extra features. 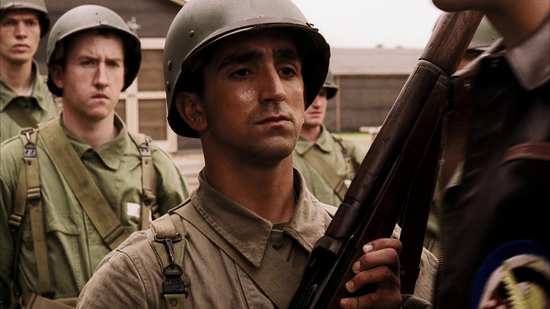 Disc 6
11. We Stand Alone Together: The Men of Easy Company.

The latter is an 80 minute documentary relating the story of Easy Company in their own words. If you’re wondering, there is no repetition between what is said here, and what is said in the PiP featurette and the bookends to each episode of the drama. 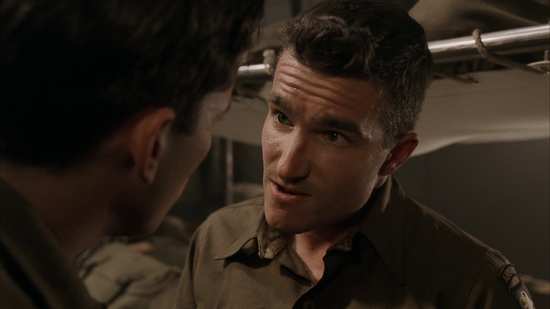 Band of Brothers gets a 1.78:1 widescreen 1080p transfer on these discs, and the picture looks impeccable. Made in 2001, this was back when film was still the medium of choice rather than digital, so to say that the episodes look cinematic is an understatement. The image is clear and sharp, free of print damage and dirt, and the filmmakers use all the expected tools such as bleach bypass and shaky cam to give the action a verité, documentary feel. The production values are high, with authentic sets, locations, props and costumes, and the only nit to pick might be some ropy early 2000s CGI. Nothing dates faster than CGI. But it is sparingly used and easy to forgive given the quality and intent of the production. 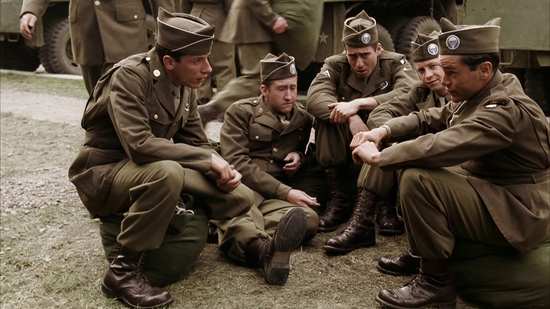 You get DTS-HD MA 5.1 Surround English and 2.0 French and Spanish, with subtitles in these languages and Portuguese. I had no problems with the English audio, the dialogue is clear, and the action scenes are suitably intense. I have to say that the music, one of Michael Kamen’s final scores, is also one of his finest, moving and emotive, and used in just the right places, quiet when the story demands. 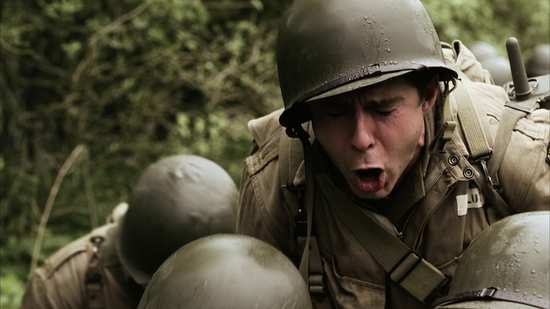 One problem might be with the secondary audio for the Picture-in-Picture feature in the extras. Certain episodes have squawks and glitches in the audio, the worst example being in episode 6. The episodes themselves are fine; this is just an issue with one of the special features and it might be a player compatibility problem at that. 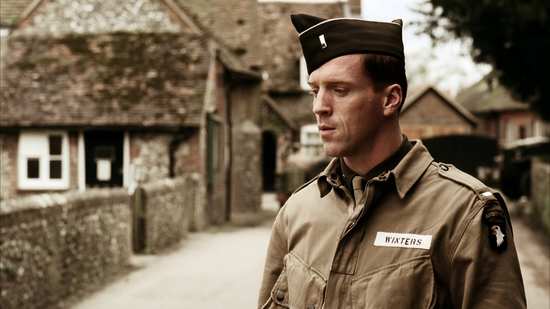 I managed to get the tin version of Band of Brothers on Blu-ray, a blue tinted embossed case, much like the DVD one, which contains a fold out digipack that holds the discs, and offers some striking artwork. The six discs present their contents with animated menus.

Exclusive to the Blu-ray release are two new extras, which run alongside the episodes during playback if you select them.

In The Field With The Men of Easy Company offers a timeline while you are watching an episode which allows you to access more facts about the history. You get information about events, explanation and translation of military nomenclature, animated maps, and documentary footage from the actual events. There is also the occasional correction, as in Albert Blithe’s story in episode three. 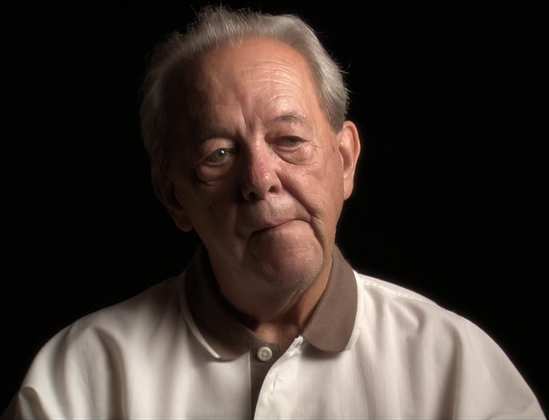 In The Words of Easy Company offers more interjections and personal narratives from the actual veterans. While the episodes are bookended by interview footage, you get more during the episodes in this extra directly pertaining to the events that occur on screen.

Normally, I’m not one to opt for these picture in picture extras on Blu-ray, as they require resetting my audio options in my Blu-ray player, resulting in the main audio being reduced to the lossy core, but in this case I don’t regret it at all, and I watched all of these episodes twice through. Also on the episode discs are the previews, the appropriate episode previews can be accessed through the episode summaries, while all ten are accessible from the extras menu. 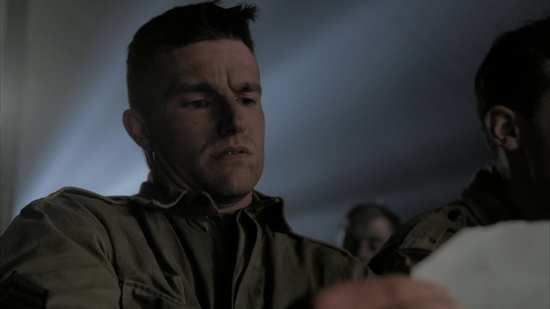 The rest of the show’s extras are on disc 6, alongside the documentary.

Behind the Scenes: The Making of “Band of Brothers” lasts 29:32, and offers the usual interviews with the cast and crew. It’s probably also your only chance to sort the English actors from the US actors.

On a more light-hearted note, there are the Ron Livingston Video Diaries, 12 parts running to a total of 56:05, following the actors as they attended a 10-day Boot Camp learning military discipline and undergoing intense physical training to prepare them for their roles. 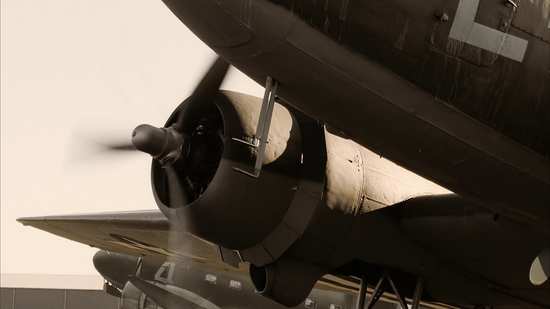 Finally there is the report on the Premiere in Normandy lasting 3:01.

It’s odd that when I watched the show broadcast in 2001, it was presented as an HBO/BBC co-production, but other than one mention in the end credits to each episode regarding editing, all mention of the BBC has been erased from these discs. 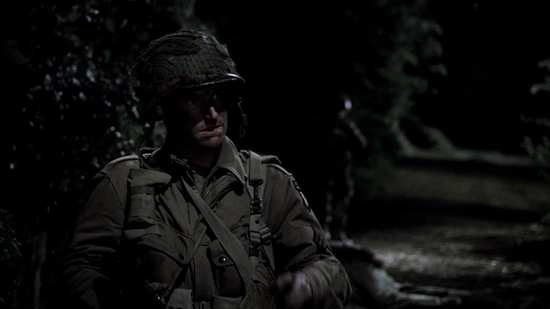 I think Band of Brothers is the best television series ever made. It’s not my favourite TV show, far from it, and I can hardly class it as entertainment, despite the excellent drama, and the odd moment of humour. It’s a gripping story, told brilliantly and utterly effective, achieving everything that it sets out to. Band of Brothers is a hard show to enjoy because it’s real, it’s a true story, these things happened, the hell that these people went through was genuine, and that’s something that plays in the back of my mind while I watch it. I also don’t want to class it as edutainment, that contrived term used to describe things that entertain and inform at the same time, as while it does these things, it rises above the po-faced seriousness and self-importance that usually pervade ‘edutainment’. 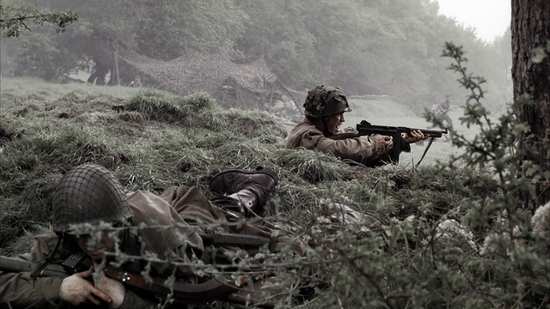 I want to say that Band of Brothers is realistic, but never having experienced any kind of conflict, I am ill-placed to judge whether its combination of acting and production design, effects and CGI, necessary dramatic licence and narrative refinement truly resembles what soldiers went through in World War II. All I can say is that of the World War II dramas and movies I have seen, all the others left me wondering, “What if I...?” Band of Brothers on the other hand convinces me that “Thank God I never...!” What this drama shows people going through in war breaks the heart, and can leave you in tears. And that is quite right. 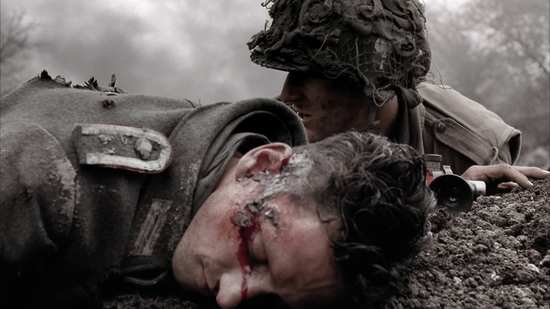 It has the tough challenge of telling a macrocosmic story from a microcosmic perspective, but in telling the story of Easy Company from training to the end of the war it does just that. Easy Company went through several of the notable events of the Allied invasion of Europe, from D-Day all the way to the taking of Hitler’s Eagle’s Nest, including Operation Market Garden and The Battle of the Bulge, as well as liberating a concentration camp. In a way, that covers all that the Allies faced in Europe, the hardest and their darkest moments to their triumphs, and it’s as coherent and easy to follow a narrative as you could get. 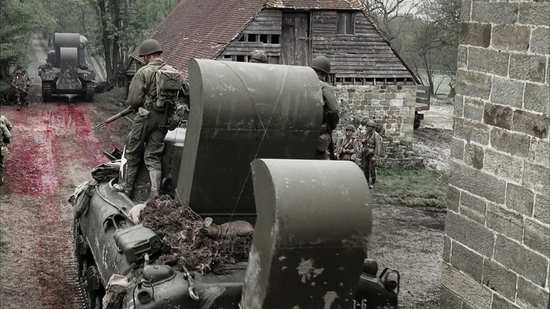 What makes Band of Brothers most effective is that each episode is reinforced by testimony from the actual veterans whose lives are portrayed here. The point of this series is made clear when you realise that of these veterans who spoke so eloquently in 2001 for this show, most likely none are alive today 18 years on. It is so, so easy to forget. It’s easy to become complacent, to think that we can never go down the same road again. Yet the day that I write these words, we’ve just commemorated 25 years since the massacre in Rwanda, when close to a million people died. Far right ideologies and populism seem to be coming to the forefront again in societies across the world, and we need series like Band of Brothers more than ever. Everyone should watch the series; it should be on the National Curriculum in schools. Merely saying, “Never again” doesn’t stop it from happening.

I watched it when it was on TV originally, thought it was brilliant. a year or 2 ago the missus mentioned she hadn't seen it, so I bought it, we watched it, and apart from the PoW camp bit enjoyed it. I think as that episode ended, she looked at me and said "can we please watch something funny" now, as it's such a horrible/brilliant/scary episode.

I went to Dachau as part of a school trip to Germany, interesting, yet horrible at the same time.

I read the book after that as well, well worth a read, even if you have seen it.

Regarding your grandfather, interestingly, my grandfather flew for the RAF in the Pacific, he lived to a ripe old age despite getting malaria out there, but he never told me what he saw/did. It must have been bad, he hated the Japanese, refused to buy Japanese goods. I remember at school I did a German exchange, when he met my exchange partner he shook his hand spoke to him. Stefan said he had been worried about meeting him, my grandfather replied "why, it wan't your fault, you weren't born then", yet he still hated the Japanese :(