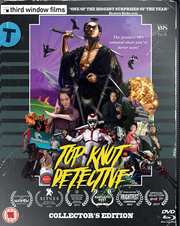 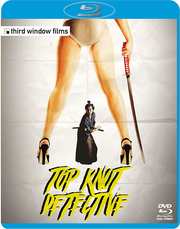 I no longer have much time for broadcast TV in my life, what with all these wonderful DVDs and Blu-rays to partake of, free of pesky advertising, and not reliant on the stability of my Victorian era Internet connection. So to keep my constant euphoria from sending me sky high out of reality, I leave my TV tuned into News 24 to keep me grounded with a healthy dose of apocalyptic gloom and despondency. What that also means is that I see that Film Review ident four or five times a day, the one with all the Mark Kermode sound-bites. So I have it ingrained now that no mockumentary comes close to the genius of Spinal Tap. And this month, Third Window Films have sent me a mockumentary to review, this Top Knot Detective. I suppose it’s a good thing then, that I’ve never seen Spinal Tap. 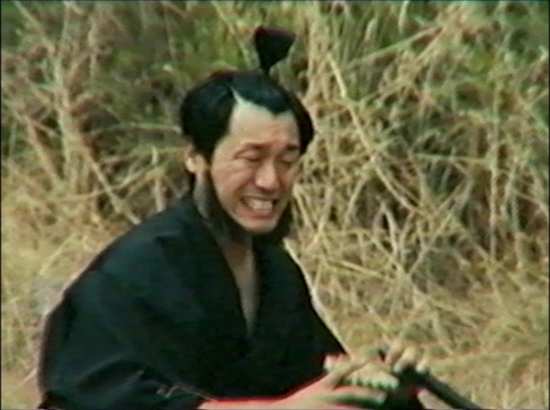 In the early nineties, for one year Australia was regaled with an imported Japanese Samurai Detective show, Top Knot Detective, which followed the journey of its protagonist as he sought to avenge the brutal slaying of his master at the hands of his childhood friend. The fairly pedestrian premise concealed a bizarre and outlandish show that truly became a fan favourite cult classic. It was shown for a year, and then it completely disappeared, leaving only some carefully preserved VHS recordings to attest that it ever even existed. In this documentary Des Mangan goes looking for the story behind Top Knot Detective, and uncovers truths almost as bizarre as the show’s plot. 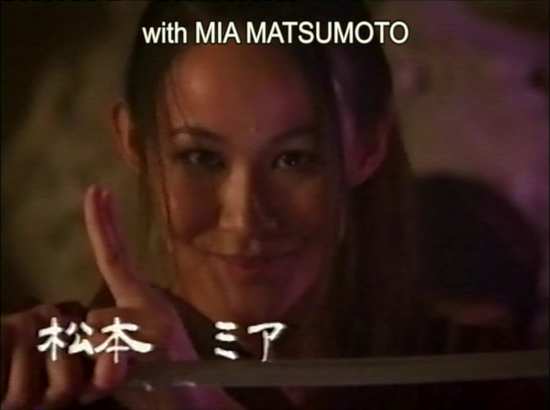 Given the genre of film, you’re not going to challenge the limits of the Blu-ray format here. The 1.78:1 widescreen 1080p transfer is mostly digital video footage of modern documentary quality interspersed with 4:3 faux-VHS quality retro-footage, while the DTS-HD MA 2.0 Stereo audio (English and Japanese with burnt in subtitles) does what it needs to get the dialogue across. Naturally the retro footage has the appropriate amount of hiss and wow and flutter. There is the odd typo in the burnt in the subtitles, but nothing too egregious. 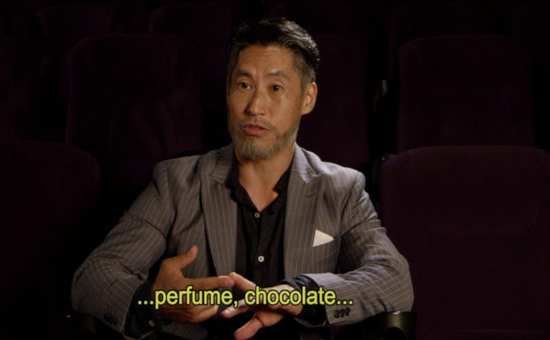 The disc presents its content with an animated menu.

With the film you get the audio commentary from the directors. 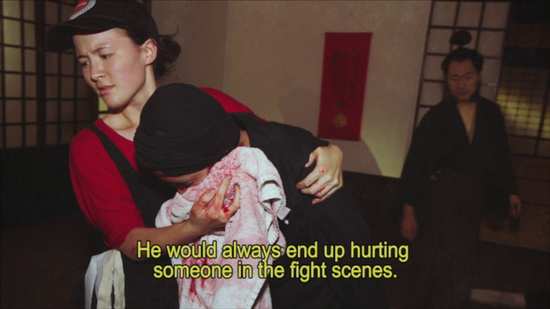 Underneath the Reasoning lasts 12:47, and goes behind the scenes of the film. It’s interesting to see that it was intended to be a web series, but got upgraded into a full feature.

Finally the Image Gallery runs to 1:12. 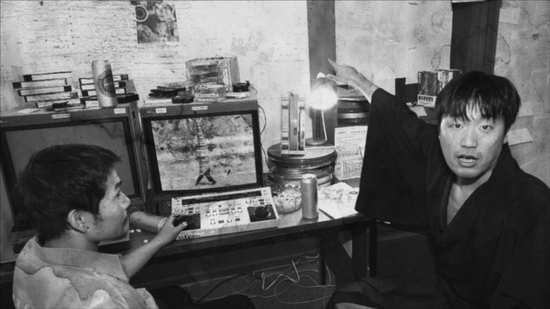 I’ve never seen Spinal Tap. But if I had, I suspect that it would probably be better than Top Knot Detective. I was really looking forward to watching this film. After all, it’s playing to my love of cult cinema and TV, as well as my sense of nostalgia. I too had a Top Knot Detective or rather two of them, weird Japanese imports that shed an otherworldly light on my childhood, although the real world Monkey and The Water Margin predated the fictional Top Knot Detective by some twenty years. I was expecting a tongue in cheek recreation of that sort of show, and I did initially see that. But as the film unfolded, and its behind the scenes story was gradually unveiled, I found less and less to appreciate. If Top Knot Detective is a mockumentary, a comedy, then it’s a comedy that failed to make me laugh, worse, it even failed to make me smile. 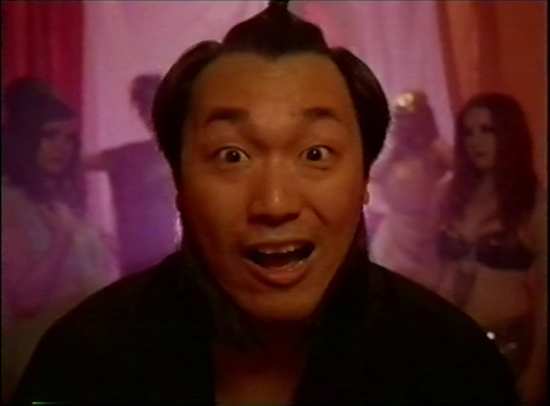 Top Knot Detective is Third Window Films first Australian title, and I think that is where my problems with the film lie. Generally speaking, I’ve never really clicked with the Australian sense of humour, finding it unsubtle and lacking in irony. Then again, I haven’t seen a whole lot of it, memories of Dame Edna and Paul Hogan, and that one time I reviewed Big Girls Blouse outweighing the genius of The Dish. I found Top Knot Detective to be one of the former rather than a rare addition to the latter category. The humour in this film is obvious and predictable. 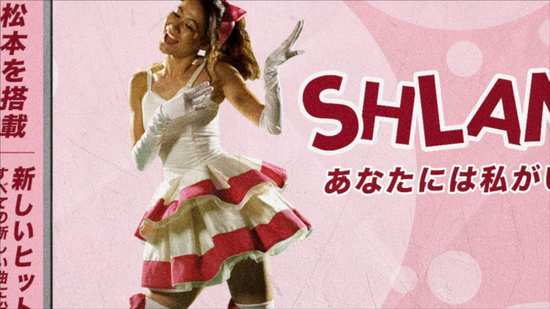 Having said all that, the filmmakers do craft an interesting behind the scenes story for the mockumentary to uncover, interspersing clips from the increasingly bizarre series with an outlandish making of story, complete with interviews with the cast and crew of the fictional show. Top Knot Detective is presented as a star vehicle for a talentless ego named Takashi Takamoto, who happened to be in the right place at the right time, capturing the attention of the CEO of the company behind the show. The mix of advertising potential and bad boy notoriety is perfect for a show at the height of Japan’s bubble economy, and the clash between the ego and his co-stars makes for an interesting and well put together tale. 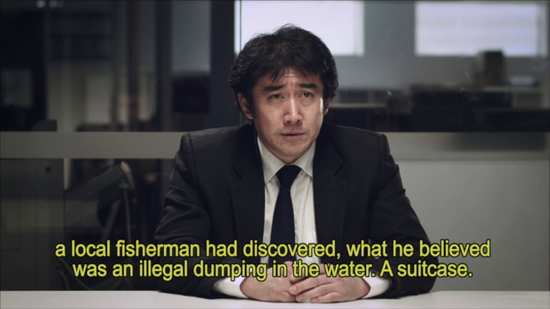 The creators have an outsider’s eye on Japanese culture and quirks that put those old Jonathan Ross and Clive James documentaries to shame, and one aspect that did catch my eye was the introduction of a pop-idol named Mia into the cast. Mia from a band that rhymes with ‘Cham’, leaving the singing career behind to go into acting to find a culture that she doesn’t expect; a Perfect Blue reference if ever I saw one. 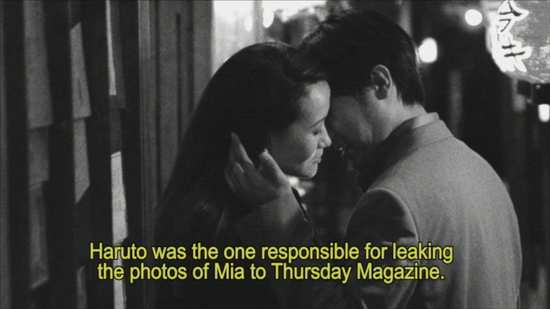 I appreciated Top Knot Detective. It has a solid, well thought out story, it’s put together well, and it certainly provokes thought with its satire as it tries to entertain. If you like your comedy unsubtle and delivered with a time-travelling baseball bat to the face (now there’s a show I want to see, Timestryker), then this film is well worth checking out. If only it had made me laugh.