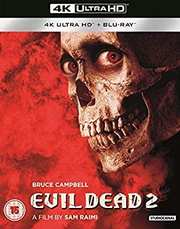 Evil Dead 2 is one of the greatest Horror-Comedies of all time. So much so, that I feel that any film (even the original and sequels) pale in comparison.

Now in 2013 they re-released the film on Bluray, does it need another re-release in 2019, even if it is in gorgeous 4K Ultra HD? Not really. If I'm honest there are only two features that weren't included on that previous set and that doesn't feel enough to warrant a new release. Yes, if you haven't bought the previous one (and how is that even possible?) then this is definitely the one to pick up.

I previously reviewed the 2013 version here and rather than repeating myself here is what I said then...

Ash (Bruce Campbell) and his friends go to a cabin in the woods where they discover the Necronomicon or The Book of the Dead which a Professor has been trying to translate. They play a tape of the Professor reading an extract and demons begin possessing the woods and everyone they attack. This culminates in one of the most amazing sequences in which Ash must fight himself, the room, and finally his hand which he gruesomely deals with in the only way he knows how... with a chainsaw. However, even sawing off his hand doesn't stop it from trying to attack him. This whole sequence (which is what most people will remember from the film) is almost like a Three Stooges sketch with Campbell playing the role of all three of them.

While this is going on, the Professor's daughter Annie (Sarah Berry) comes across Ash with more pages found from the book. She assumes that Ash is a murderer which is not surprising with him now sporting a groovy chainsaw in place of his right arm and brandishing a sawn off shotgun. The scene of him making this armour is iconic and makes the film even better. During all this, the two must face Annie's possessed mother who has been kept locked in the cellar and even the possession of Ash himself. This all comes together to an epic, disgusting and utterly hilarious climax that anyone who has seen the first film will come to expect from the series.

It will come as no surprise when I say that I loved this film, though I do prefer its sequel Army of Darkness and I am more impressed with what they achieved on no budget in the original, this film is just a wonder to behold. This, as I say, is Raimi at his best, Campbell at his best and horror comedy at its best. Many people will probably find the horror too gruesome or the comedy too slapstick, but that is the point. Once you start applying reality and logic to the whole film you start to realise how uneven the whole experience is. The best advice is don't think about it. Watch the film as the entertainment that it is. It is supposed to be funny, it is supposed to be over the top and at times it is supposed to scary. The mix of all the elements throughout the film make it one of the best of its genre and I can't think of any film that could compete.

The Blu-ray is a haven for those who are fans of the film featuring a wonderful commentary by Sam Raimi, Bruce Campbell, co-writer Scott Spiegel and Special Makeup Effects Artist Greg Nicotero. This is full of great stories about how the film was made and like a lot of commentaries it is almost like you are eavesdropping on a group of good friends just having a chat. There are three exclusive new featurettes Swallowed Souls: The Making of Evil Dead 2 is an indepth look into how the production was made and when you see all the hard work and effort that went into some of the scenes you will appreciate it even more. Cabin Fever is a look behind the scenes of the making of the film and along with the other archival 'making ofs' this will fill in almost every secret in the creation of this masterpiece. If you wanted to know how they did anything in this film then these will reveal it. The final new featurette is Road to Wadesboro, a revisit to the locations where the film was made.

The only new addition, as I say, apart from the glorious transfer and look over the overall film is the documentary Bloody and Groovy, Baby! - Tribute to Sam Raimi’s Evil Dead 2 which is a look at the film and its influence by some famous Directors the likes of Edgar Wright (Shaun of the Dead), Guillermo del Toro (The Shape of Water) and legendary film Producer Roger Corman. There is also an archive interview with Bruce Campbell which is great to hear him discuss the making of the film.

If you own the previous set it would be difficult to recommend this unless you are a hardcore fan who must own everything. However, if you don't already own the film (again how is this even possible), this is the version to own. Evil Dead 2 is one of the greatest films ever created and if you have never seen it then this is definitely something you should rectify. You will thank me later and even say 'Groovy'.

Is there any noticeable difference between the 4K and Blu-ray image quality?
posted by Robee J Shepherd on 10/3/2019 16:03