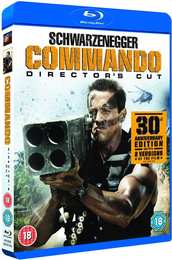 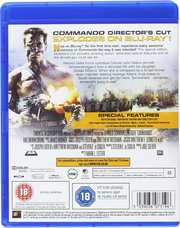 Commando got a raw deal (pun intended) on DVD in the UK, only ever released in heavily edited form. Despite the cuts being waived by the BBFC, the film never got a UK re-release, and I was left to import the DVD from Australia. The Definitive Edition presented the film across two discs, a Theatrical Cut and the Director’s Cut, along with some extra features, and uncut for the first time. Despite it being an Australian release, the discs were primed for UK release, booting up with the UK anti-piracy trailer from F.A.C.T. They never came here in the end, but all of that was finally rectified with this Commando Director’s Cut Blu-ray. DVD owners may be left having to import, but if you’re HD capable by now, you can have all of the violence and mayhem without adding a tonne of CO2 into the air shipping the thing over here. 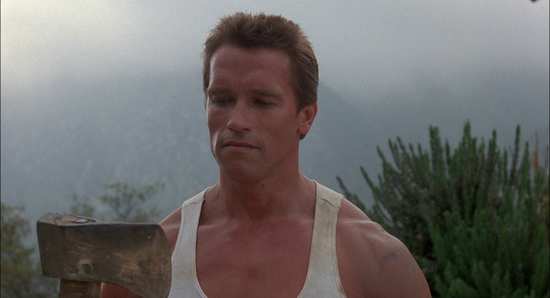 John Matrix is a retired Special Forces operative who is living the idyllic life with his daughter Jenny up in the mountains somewhere. Only someone has been killing off members of his former team. When his commander General Kirby pays a visit to warn him of the danger, it actually leads the bad guys to his door. Despite all the bullets flying, they need Matrix alive. With Jenny in the hands of Val Verde’s deposed President Arias and his henchmen (including Matrix’ former comrade in arms Bennett), Matrix has no choice but to obey their demands to head to Val Verde and assassinate the current president Velasquez. That’s what they think! Matrix is soon free, and he wants his daughter back. And he’ll go through every one of Arias’s men to get her. But he’s only got eleven hours, and the questionable help of Cindy, an air hostess who was in the wrong place at the wrong time. And so the body count begins… 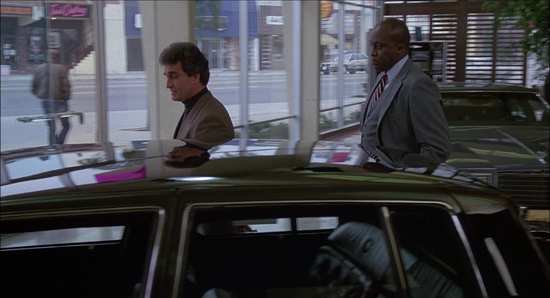 Commando gets a 1.85:1 widescreen 1080p transfer on this disc, and thankfully it’s no Predator or T2. They haven’t felt the need to muck around with it too much to make it look as HD as possible, and instead have made the best of that eighties film stock that they can. The image is clear and sharp, the print is clean of dirt and print damage, and the presentation is nice and filmic. It is a strong improvement over the DVD, and well worth the upgrade. The film gets good contrast, dark detail is impressive, but overall, the detail levels are fair. It’s to do with the source material I suspect, and the full HD crispness that we expect with modern features would only be possible with the egregious DNR and post-processing that I tend to shy away from. One thing that the HD transfer does do is reveal the joins in the stunts and effects shots that weren’t visible on DVD, and you can see the wires in a few scenes now. 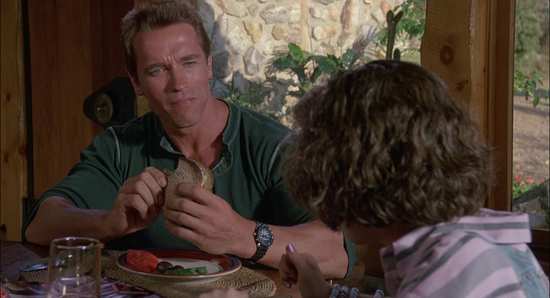 You have the choice between DTS-HD MA 5.1 Surround English, DD 1.0 mono Spanish, DTS 5.1 Surround French, Spanish, German and Italian, and DD 5.1 Surround Thai and Czech, with subtitles in these languages, Danish, Dutch, Norwegian, Finnish, Swedish, Russian, Korean, and Japanese. It’s a pity that the original stereo track isn’t available, but the English surround is pretty decent in keeping things relatively front-focused. There is a bit of ambience for music and effects, but Commando saves its surround flash for the final battle, when bullets are flying all over the place, and of course the hero’s guns need the subwoofer in a way no-one else’s guns do. The dialogue is clear throughout. 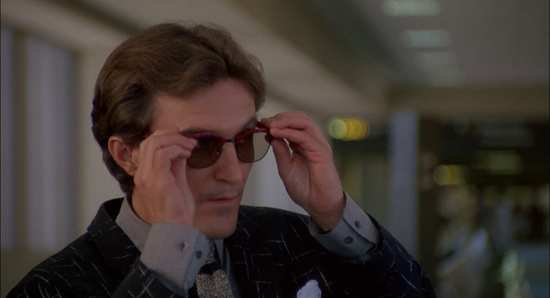 You get one disc in a BD Amaray, which autoplays an anti-piracy thank you before booting up an animated menu.

There are three deleted scenes totalling 2:53 in length, presented in 1080p

Pure Action lasts 15:08 480i and is a retrospective documentary with the cast and the crew. 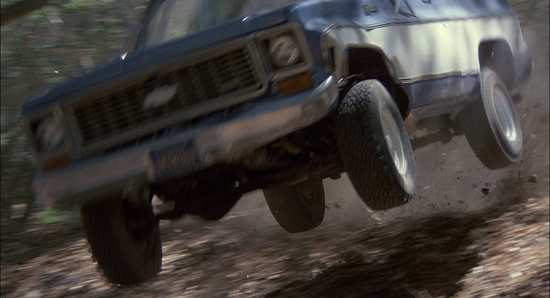 Let Off Some Steam lasts 7:18 480i and is a more fun look at the film, focusing on the wisecracks and the refusal to take anything seriously.

The most substantial piece is the commentary with director Mark Lester. It’s a nice, interesting, retrospective look at the film, and although it is gappy to begin with, he becomes more voluble as time passes. This is available on both cuts of the film.

Finally the Theatrical Trailer is presented in 1080p. 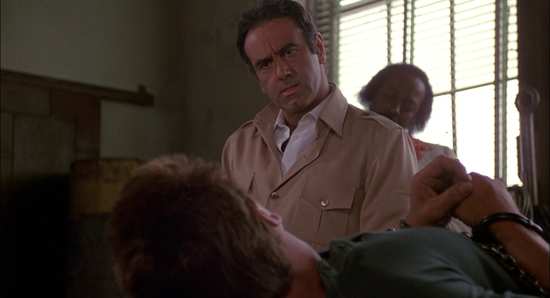 I grew up with Commando, it’s a film that for me can do no wrong, and it gets an instant pass. No matter how cheesy it is, how bad it gets, how corny the dialogue, how ill-judged the performances, I find something new to appreciate each time. For that is what Commando is, the quintessential action flick, distilled down the purest of ingredients, packaged in the ideal runtime. It’s one colossal wink to the audience, as if to say, ‘we know you’re enjoying this, but I bet we enjoyed making it even more’. It’s 90 minutes of popcorn munching fun, no lip service paid to political correctness, no pointless sentimentality, but plenty of inventive deaths, great stunts and action, one-liners that you end up memorising like lyrics, the screen slaughter of a random ethnic minority, and a random sidekick to voice our incredulity. 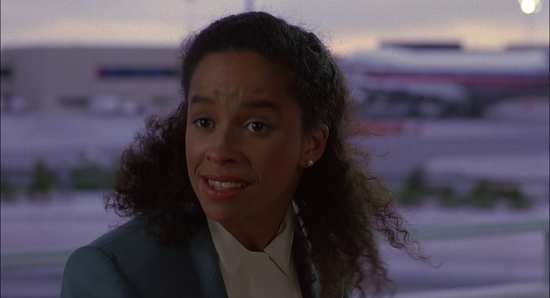 All that was cut from the previous releases is back in. So all the gratuitous violence, the impalements, the breaking of necks, heads being sliced open, and axes in groins that you could ever want. Originally, the BBFC had insisted on 12 seconds of cuts for the theatrical release. We in the UK never got to see Matrix slice off the arm of Johnny Foreigner, but that has been waived by the BBFC now. With only 90 seconds of additional footage, there isn’t much to add, and only two scenes spring to mind, both of additional dialogue between Matrix and Cindy. The first when they leave the airport sees Matrix explain more about who he is, which explains why Cindy was a little more trusting of him later on. The second offers a chance for Arnie to emote as he tells Cindy more about Jenny and her long deceased mother. This scene is veering a little too close to sentimentality at this point, but fortunately it’s only a matter of seconds before we get back to the killing. 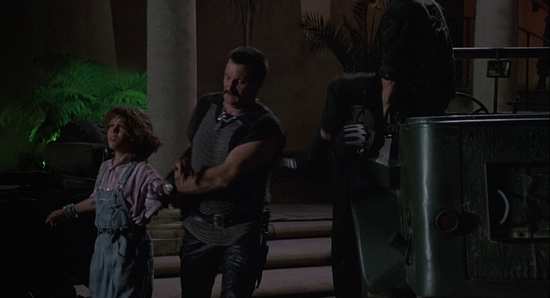 It’s a computer game of a movie. Bad guys kidnap Jenny, big mistake, cos now they’ve p***ed off Arnold. Arnold works his way through the mid level bosses, the sleepy Henriques, the wimpy Sully, and the bad ass Cooke, before getting to the final island level, where all the power ups and weapons he’s been collecting so far gets put to use. That firepower comes in handy as he takes on and wipes out most of the Mexican army, or random extras with really bad facial hair, (the sub game here is to see how long you can you can make a corpse dance before it hits the ground, keeping it twitching with a hail of automatic weapons fire) before you face the end of level bosses, overacting dictator and Freddie Mercury in a string vest. 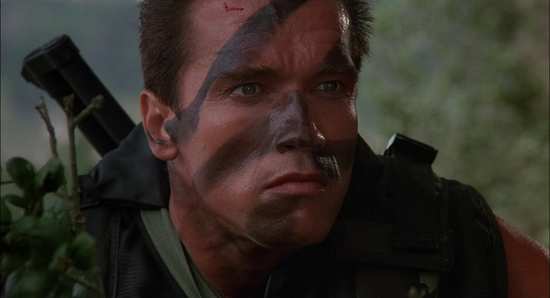 How can a movie so bad, be so good? I haven’t the slightest idea. All I know is that when I need a boost, Commando is the first film I turn to. And with this Blu-ray, we finally have both versions uncut in the UK, and while it looks better than the Australian DVD, the real improvement comes in the audio.