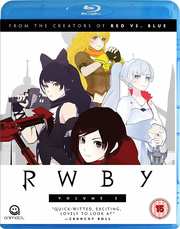 It’s time for another quick cut, paste and modify review, although this time there will probably be more to modify as this is more than just a simple double-dip upgrade. Back when the review copy of RWBY: Volume 2 originally showed up, it was a pesky, single-layered DVD-R. That’s hardly representative of a retail release product, so when the Blu-ray eventually hit a bargain bucket, I snagged a copy. It’s finally percolated its way up to the top of my re-watch pile. Let’s see how much difference HD makes. 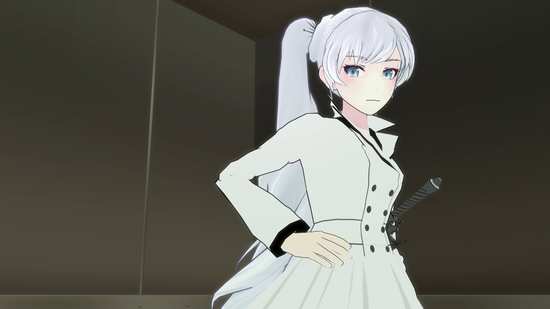 Inspired by classic fairy tales, RWBY takes place in a magical world called Remnant, where humanity has long fought a desperate battle against the Creatures of Grimm, but the tide turned when the mysterious element called Dust was discovered. Dust can be used to power magical abilities and weapons, and using this power, Hunters and Huntresses can fight back. Ruby Rose wants to be a huntress, and has managed to skip two years and get accepted into the Beacon Academy. But while she has kick ass abilities, and has made an evil looking scythe/machine gun to deal death to the monsters, she’s shy and uncertain of herself. This isn’t good where the class structure of Beacon means first forming four-person teams before even starting training. Fortunately, the first person on the team is Ruby’s older and exuberant sister Yang Xiao Long, but the first time she meets Weiss Schnee, it’s disdain at first sight, and it only gets worse. Antagonism is fine, but it looks like Blake Belladonna would rather not talk to Ruby at all. They’ll have to work on their communication skills though, as the four girls now comprise team RWBY (pronounced ruby), and guess who’s the leader. 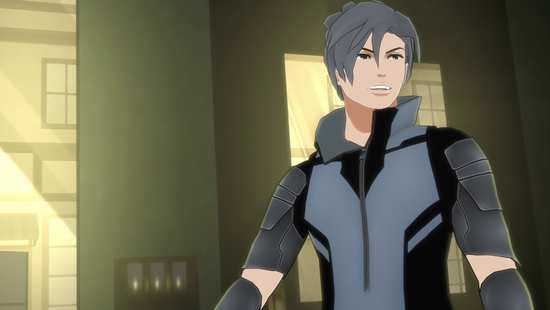 The girls are starting their second semester at Beacon Academy, but the events of the previous semester still weigh heavily on Team RWBY, particularly Blake Belladonna. Roman Torchwick is still out there, plotting and scheming with White Fang, following the bidding of the mysterious Cinder, while Dust continues being stolen in Vale. Something ominous is afoot, enough so that it has the military in town. But how important can that be when the inter-school Vytal tournament is coming, and with it the school dance, and boys? But Cinder and her minions have infiltrated the school... 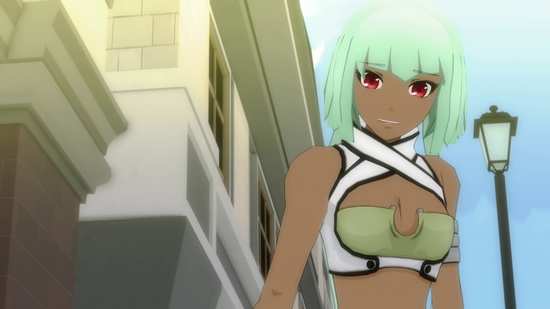 RWBY Volume 2 is presented on this Blu-ray disc in feature length form running to 152:19, or you can watch all twelve episodes individually, which with the credit sequences takes the runtime to 168:17. You have to choose between movie mode and episode mode from the audio set-up menu each time you insert the disc before playing it, which is a pain. 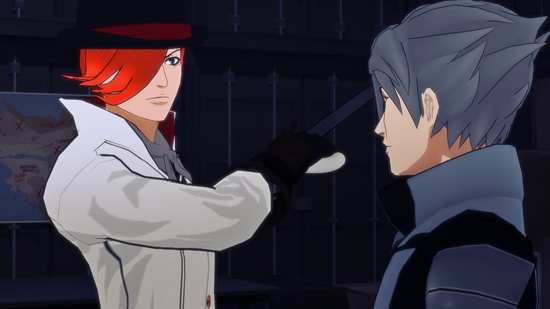 RWBY gets a 1.78:1 widescreen transfer at 1080i 60Hz interlaced. A progressive transfer would have been preferable. The odd pan and scroll can be jerky at times. RWBY doesn’t look too great. It’s a 3D CG toon-shaded animation, but we’re not talking Appleseed or Vexille here. This is definitely a low budget affair, and it resembles 3D animation that’s some 10 or 15 years old, on a par with movies like A.Li.Ce. While the animators use anime style in the character designs (big eyes, small mouths), and drop in gags like SD transformations and the like, it still doesn’t feel like anime to me. It hasn’t got the same sense of stillness; the characters are always in motion. And in the quieter scenes, the drawbacks of the animation style are always apparent. These are characters that don’t look as if they can interact with their environment, each other, or themselves. Everything seems to ‘float’. 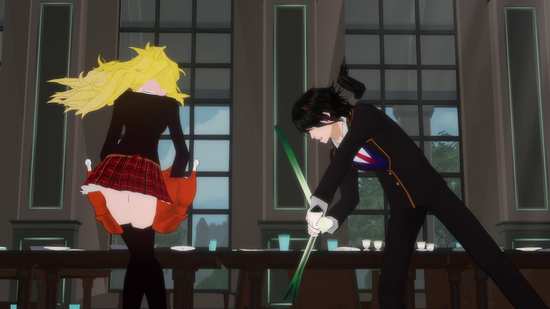 But then there’s an action scene, and RWBY can be utterly breathtaking. The choreography, the cinematic direction, the visual style is all so dramatically accomplished, that for those brief action sequences, you totally forget the budget drawbacks. The character designs are also very well thought out, making each character instantly recognisable while remaining appealing. 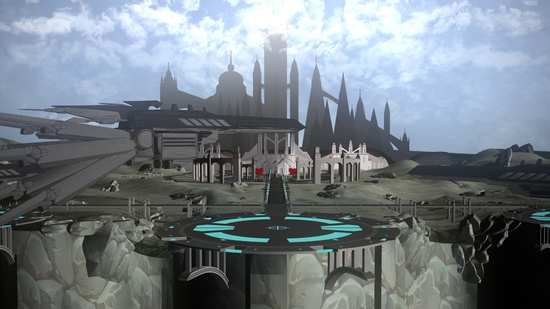 Technically, the image quality isn’t great, and this transfer shows all the flaws you can imagine, banding, aliasing, and a few glitches too. This time, I don’t think it’s the Blu-ray, it’s probably the source material, and it’s notable that by Parts 4 and 5, Rooster Teeth had upgraded the software they used to animate the show. 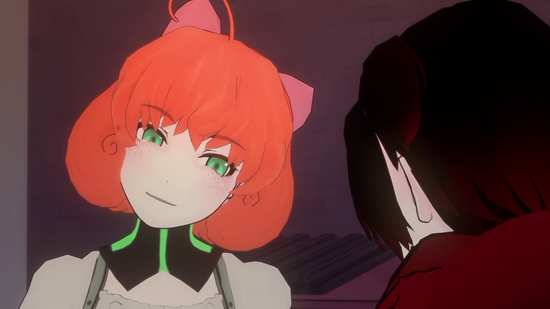 The sound is a little disappointing on this Blu-ray, merely a DD 5.1 English track at 448kbps, DVD quality at best. The dialogue is clear enough, and this time there are subtitles. That’s useful, as I think I lost my faculty with hyperactive American teen girl-speak after Buffy the Vampire Slayer ended on TV. There are the occasional moments where the audio sounds a little rough and distorted for some dialogue, but generally it’s watchable enough, and the action sequences come across well. 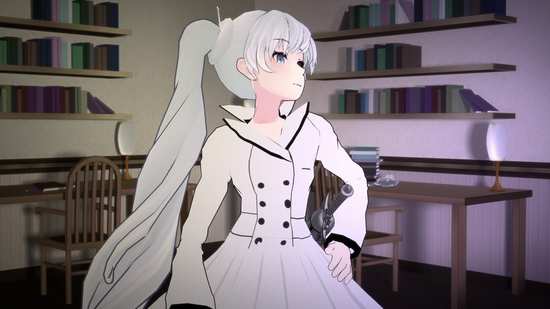 You get one disc in a BD Amaray. The disc boots to an animated menu.

The disc isn’t shy on extras either; in fact you get even more here than the generous DVD. The four audio commentaries are repeated. This time the Directors, the Cast, the Animators and the Tech Team all get a look in.

There are Rooster Teeth trailers, 9:11 of intro to various aspects of the World of Remnant, and 52:25 of Production Diaries (BD exclusive). 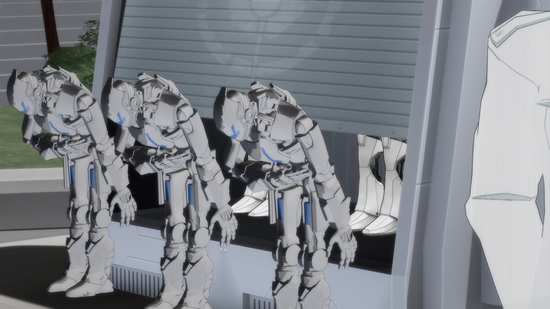 There is a 10:27 slideshow gallery of Production Art, a 38:12 RTX Panel featurette (which was incorrectly presented as the Production Diaries on the DVD), 13:39 of Chapter 1 Storyboards, and the Season 2 Trailer. 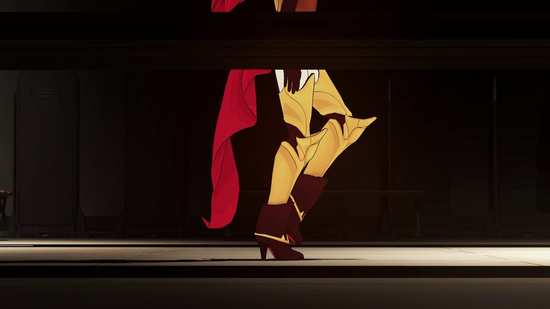 I had a hard time getting into RWBY Volume 1 when it came out, not least because of all of the anime comparisons, a claim from some quarters that it matched and even surpassed what I usually review from Japan, a genuine US home-grown anime. Of course it turned out to be nothing of the sort, and I had to take a bit of time to get past my jaded preconceptions. I also had a tough time with its CG animation style, which was schizophrenic at best, with unappealing character designs, close up character animation that lacked weight and physicality, but with action sequences that were genuinely cinematic and breathtaking. With Volume 1’s collection of 10 episodes, it also turned out to be something of a slow build to what RWBY is really all about, spending the first half of the first series introducing the characters and revealing the world in some trivial and light episodes, before the second half got into the story. Once I got used to the animation style, and ditched my preconceptions, I found that RWBY slowly got better and better through its first series. 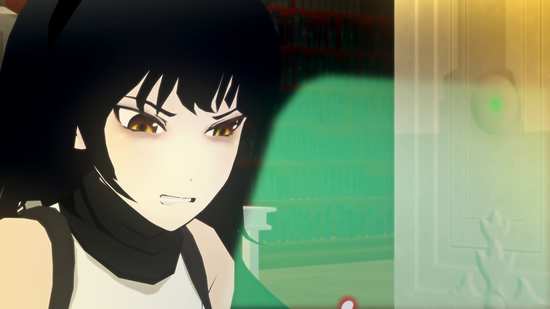 Season 2 hits the ground running, without the benefit of a recap to ease us back into the story, and it’s all to the good, as Season 2 has a lot of story to tell, and no room for dead weight. With Season 2 it becomes clear that RWBY is coming from the Harry Potter school of storytelling, with Beacon Academy the Hogwarts of this universe, and its students apparently discovering a new adventure each semester, with Season 2 covering the second semester. Season 1’s conspiracy was ambiguously concluded with a dockside battle and the revelation that villain Roman Torchwick was working for someone else, a mysterious woman. That woman gets a name in this season, Cinder, as well as two minions that we meet in the first episode, Mercury and Emerald. They’re paying a final visit to a bookseller at the start of the first episode, while Ruby and her friends are having an epic food-fight at school, and I do mean epic! 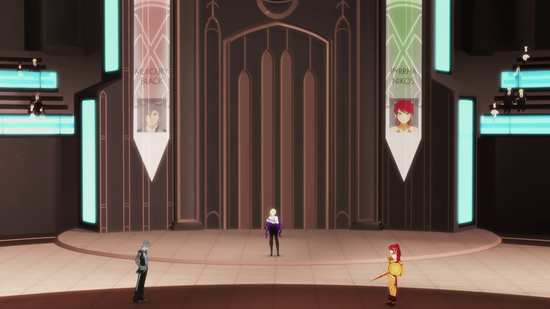 There is a whole lot going on in this series, with the inter-school Vytal tournament still being prepared for, the complication of the military presence for the upcoming event, and the upgrade of the police robots in town. With the tournament comes the formal dance, and the usual agony of asking girls to go. Against this normal life, the tension between humans and Faunus continues to fester, something which Torchwick is using to advance his own plans, while Cinder and her minions infiltrate the Academy for their mysterious purposes. Team RWBY should be concentrating on school, but the events of the first season have had a lasting effect on them, and they continue to investigate Torchwick and the White Fang group. Naturally they uncover this season’s big threat in the process, and the school curriculum’s on the job training allows them to get into more peril than they anticipated. 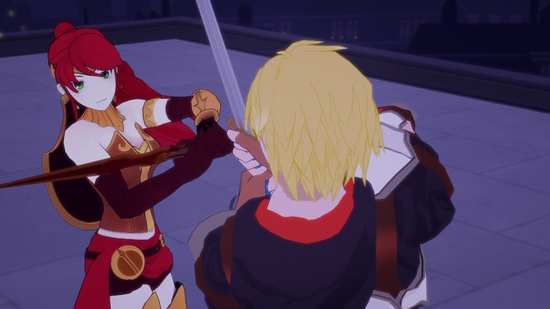 The animation is still a mixed bag, but the storytelling really does engage. The script is witty and entertaining, and the voice actor performances really do work well. The story has plenty of twists and turns and some genuine surprises, and I was surprised to find that I was hooked from beginning to end this time, as opposed to the slow growth in appreciation for season 1. It’s fast paced, it’s funny, and it’s action packed. 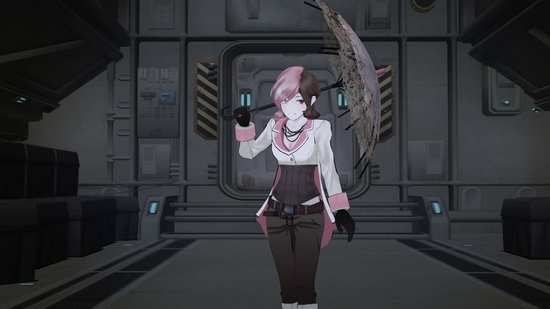 Four hours of video content on a DVD-R is no way to judge a retail release. It’s not a lot of fun to watch either. I remember one review disc that I had to take out of the player every half an hour, wave it around like an idiot so it would cool down, as the second it got hot, the player crashed. The DVD-R of RWBY Volume 2 wasn’t that bad but it wasn’t great to look at in playback. Now that I have the Blu-ray at hand I can happily tell you that it still doesn’t look great in playback, albeit for wholly different reasons. But you do get even more in the way of extra features than the DVD.