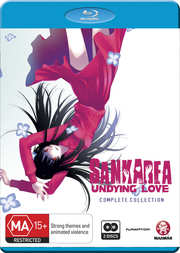 Sometimes anime DVDs are just about good enough that you don’t really need to upgrade. That’s especially true of shows from the period between 1998 and 2007, when most of them were produced digitally at SD resolution, although even today, some low budget shows don’t even challenge HD resolutions. Sankarea isn’t one of those shows, with its detailed and atmospheric animation really only shining at HD native. It was also one of those shows from when MVM were just dipping their toes into Blu-ray that they released DVD only, so I was going to double dip anyway and import. So it really didn’t matter that all the DVD releases in English speaking territories had a subtitle error on episode 11, where the dialogue subtitles were replaced by the theme song lyric subtitles instead. But just in case you need another justification to the get the US or Australian Blu-ray, there you go. 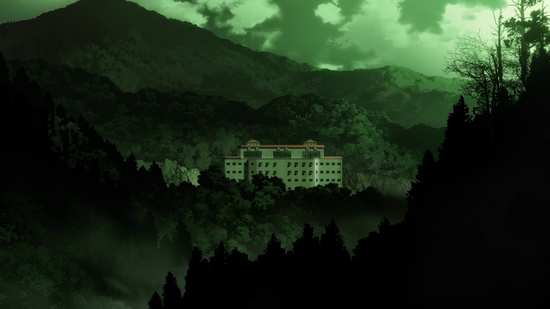 Chihiro Furuya is a weird kid from a relatively normal family. He lives at a shrine where his father is a priest, with his kid sister Mero and his grandfather and the family cat, Babu, and often pestered by his outgoing cousin Ranko. Chihiro has a zombie fetish. It isn’t just his intense fandom for the zombie genre; he has what he believes is an impossible wish for a zombie girlfriend. Impossible? When the cat is hit by a car and killed, Chihiro can’t deal with the loss, and he decides to reanimate the pet, using a mystical text from the temple. But the ink is smudged on the crucial page, and he’ll have to use trial and error to figure out the special ingredient. So he’s going to the abandoned bowling alley every night with Babu’s corpse... 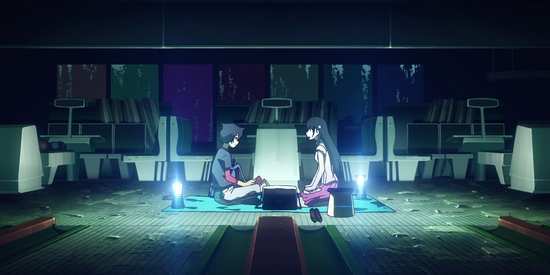 Rea Sanka is a relatively normal kid from a weird family. Her family’s name is on the local girls’ school, and she’s considered the princess, but her mother is cold and unloving, her family has an ever changing domestic staff, and her father is overly affectionate and controlling... and creepy. She has no life of her own, no friends, which is why she escapes from the house each night, and goes up the hill to scream her frustrations into the well outside the abandoned bowling alley. Inevitably she and Chihiro meet and get to know each other. She even suggests that the missing ingredient in his elixir might be the poisonous hydrangea blooms. It’s the last night of Chihiro’s attempts to bring back Babu, and Rea steals a vial of his final elixir. But her father catches her when she sneaks back home, and confines her to the house. Feeling trapped and frustrated, Rea drinks the elixir, hoping that he poison within will end her suffering. Instead she wakes up the next day... different. 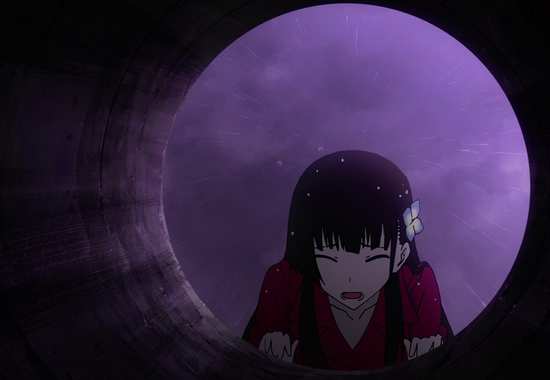 Sankarea’s thirteen episodes are presented across 2 Blu-rays from Madman Entertainment thus, and the episode titles get the full Shatner. They call the thirteenth episode the OVA, but according to the ANN Encyclopaedia, it’s the un-broadcast thirteenth episode that was bundled with the final DVD/BD release in Japan. There are two OVA episodes of Sankarea, but they haven’t yet been released in the West. 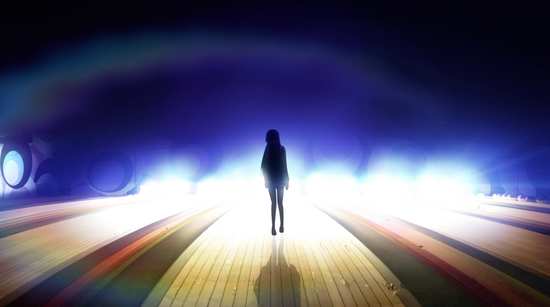 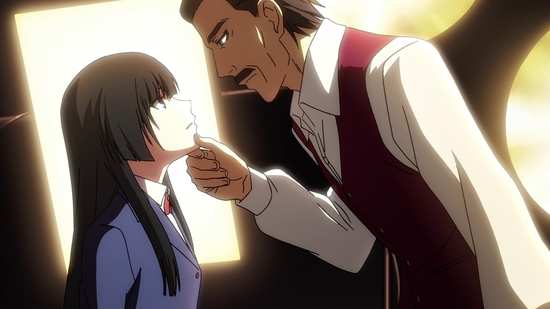 Sankarea gets a 1.78:1 widescreen 1080p transfer. The image is clear and sharp throughout, with strong consistent colours, and no obvious signs of compression. Colours are strong and consistent, the animation is smooth, and detail levels are astounding. This is very much an HD animation, and the Blu-ray presentation does it full justice, well worth upgrading the DVD for. Sankarea gets some really impressive production values, interesting, slightly off-key and spooky character designs, solid and engaging world designs, and a thoughtfully expressive colour palette, used well to bring out the mood and tone of the story. 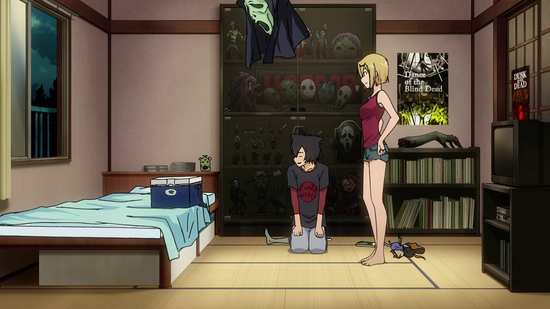 You have the choice between Dolby True HD 5.1 Surround English and 2.0 Stereo Japanese with player locked subtitles and signs. I was immediately put into a good mood for the show when I heard the opening theme, another peppy nano.Ripe ditty. You can bet that I’m going to profess my preference for the original language audio, and sure enough I was very happy with the voice actor performances, and the general quality of the audio, the stereo offering a nice degree of space. The subtitles are accurately timed and this time are completely free of error, well worth upgrading the DVD for. 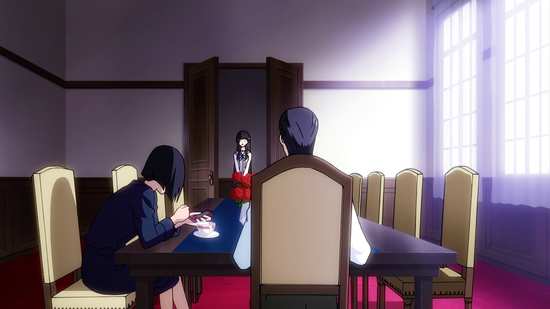 Sankarea is presented across 2 discs, which you get in a BD Amaray from Madman, with one disc held on a centrally hinged panel, and some attractive artwork on the inner sleeve. The discs boot to animated menus. 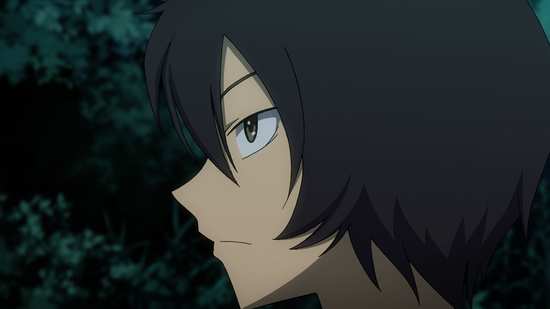 Disc 2 offers the textless credits and the US trailer. You also get an audio commentary on episode 11 with ADR Director Joel McDonald, Terri Doty, and voice of Dan’Ichiro, David Wald.

There are also trailers for Black Butler, Princess Jellyfish, A Certain Magical Index II, Dragon Ball Z: Battle of Gods, Fairy Tail, Ghost in the Shell: Arise, and The Devil is a Part Timer. 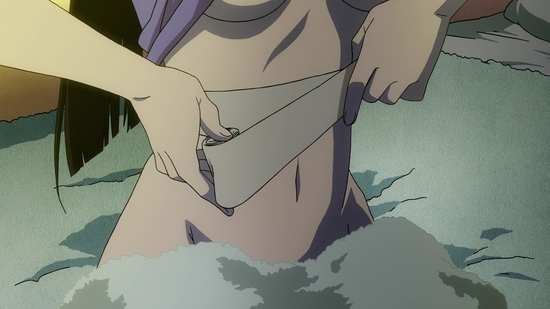 It happens a little too often for comfort these days when I watch anime. Interesting... good... entertaining... fun... great... brilliant... you call that an ending?! Shows grow on me as I watch them, I find that I’m investing myself in them more and more as they unfold, and then they mess it all up with the final episode, leaving a sour taste in my mouth, a feeling of time wasted, emotional investment squandered. I have to step back for a couple of days, think about something else instead, before coming back to the show, and asking if the journey was worth it, regardless of the non-ending. Sankarea is one of those shows, which with its last gasp concludes on a deliberately open-ended note, introducing a new character in its final scene, an obvious plea for a second season by its creators. If that fails, we’ll have to adjourn to the manga, and hope that the anime didn’t stray too much in the adaptation. 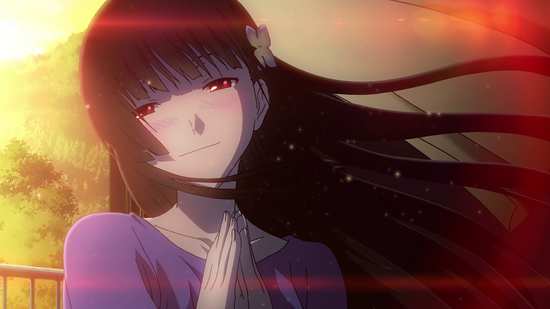 This second time around, I still really liked Sankarea, as it delivers something all too rare in the anime that I watch these days... something original. As I mentioned, it isn’t the first dead girl/live boy romance I have seen, but Dusk Maiden of Amnesia had the fortune to start with the girl already a ghost. That series started off on a very comedic and light note, before gradually becoming darker and serious. It eased the viewer into the more distressing aspects of the story. Not so with Sankarea, this starts off in a dark and comic mode and pretty much stays unsettling and discomfiting throughout. 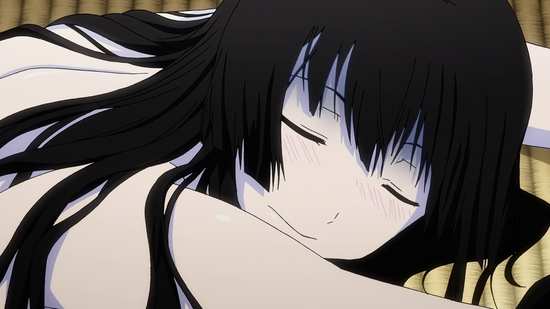 It starts off with its female protagonist very much alive, and takes us through the events and processes that lead to her zombification. Right there, you know that it can’t exactly play those scenes for laughs, and it becomes even more serious when you learn exactly how Rea is turned into a zombie. That she has to die is evident enough, but when it turns out that the creation of a zombie comes through the ingestion of an elixir, which contains a poison to live humans, you have to wonder just what sort of circumstances would persuade Rea to choose such an option. When you meet her creepy, overly-controlling father, and her cold, heartless stepmother, as well as the weird army of maids in their mansion, you’ll get some idea. Especially with the father dictating Rea’s every move, personally intervening and sabotaging what few friendships she might have, with a weird notion of what constitutes a family album, and obviously grooming Rea for... well it is tantamount to child abuse. No wonder she wants to escape. I have to admit that the first few episodes of this show were more unsettling than they were entertaining 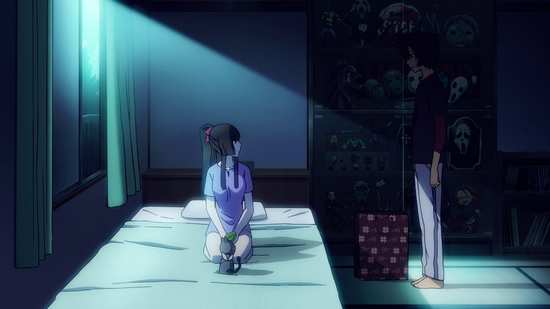 Fortunately it’s offset in the early episodes by the introduction of Chihiro, his friends and family, and his zombie fetish, as well as his unlikely meeting and growing friendship with the living Rea. That process begins when Chihiro’s pet cat (with a speech impediment) Babu dies, and Chihiro becomes determined to bring him back. He’s conducting his reanimation experiments in secret when he meets Rea, and she finds herself drawn to this morbid boy with a fetish for the dead, simply because he’s still the most normal person that she’s spent any amount of time with. 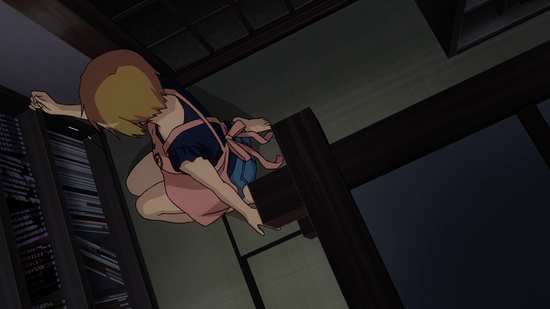 Things change after Rea’s death, and reanimation, as she moves in with Chihiro and his family at the temple. What follows is pretty much a slice of life (slice of death?) show, as Chihiro gets used to living with the zombie of his dreams, although he’s less concerned with matters of the cold flesh, than trying to keep Rea from decomposing. And even in this show there’s the complication of the other girl, in this case Chihiro’s cousin Ranko, who’s had a crush on him ever since they were toddlers, and is now out of sorts with Chihiro having found his dream dead girl. As per usual for anime, eventually an odd, friendly rivalry forms between Rea and Ranko. And as we get to know more about Chihiro’s family, the more we see that it’s not exactly the conventional family unit. Chihiro’s little sister Mero follows the quiet, subdued stereotype, and dresses like a ghost to sleep. His grandfather is addled, and eats hydrangea leaves as a snack, and it looks as if Chihiro may not be the first to dabble in the reanimation of the dead. 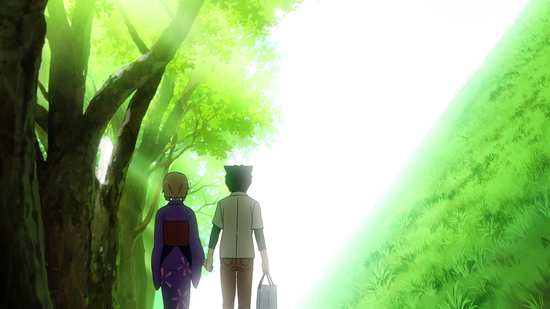 Towards the end of the series we get back to the plot, as Rea’s dad becomes determined to reclaim his daughter, dead or alive, and winds up kidnapping Chihiro to do so. This is interrupted by a really charming episode that concentrates on Mero, who’s been pretty much a side character to this point, only really noticeable in the next episode previews, but the show’s conclusion heads towards dealing with Rea and her creepy father, trying to resolve that painfully awkward relationship, before hopefully moving Chihiro and Rea’s relationship in a positive direction. 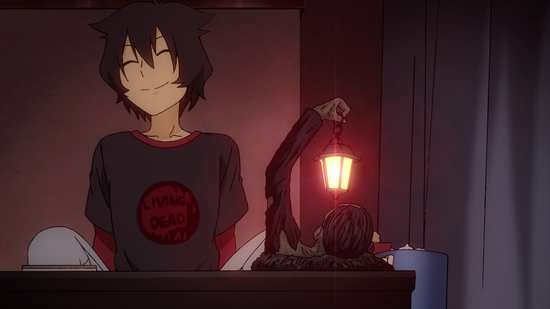 Then there’s that final episode, fun for the most part, told from the zombie cat Babu’s point of view, a day in the life and un-death of Rea and Chihiro, but then comes that non-ending which is making me grumpy again just typing about it. The pacing isn’t that great, with the show uneven in tone, the fan service is up to the usual anime standards, and it leaves far too many questions unanswered about both Rea’s family and Chihiro’s family, and the romance is barely getting started as this series comes to an end. I wouldn’t be averse to more Sankarea down the line, but what we have here certainly entertains during its runtime. And I can safely say that I have no other anime romances with a zombie girl and zombie otaku boy in. Sankarea definitely gets a plus point for the novelty factor. 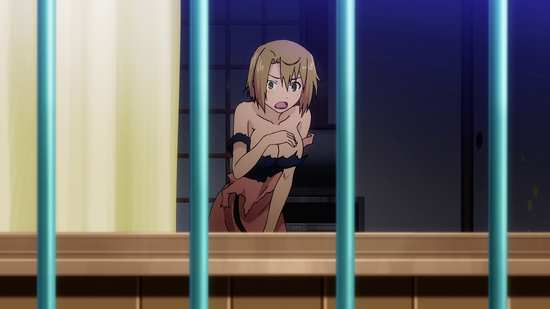 But I have to admit that the second time blues did sink in with me. I felt the lack of an ending more, I felt the pace of the show dragging more, and I wasn’t as well disposed to the ‘stand-alone’ episodes as much. The story about Chihiro and Ranko’s childhood, the Mero episode, and the final Babu perspective story all felt like roadblocks in the path of the narrative, and I even felt my attention start to drift. The show’s concept is still good, but it doesn’t quite hold the interest the way it should. Still, the Blu-ray is a palpable step up over the DVD, and if you are a fan of Sankarea, you really should consider double-dipping.