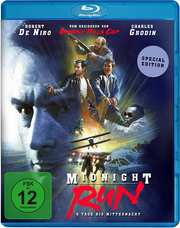 Would you believe that I gave the Second Sight release of Midnight Run a pass back in 2015? You might not think so, given that I spent my time whinging about the player incompatibility that sent the audio out of sync on my home cinema. And even with that somehow rectified, there were two scenes on the disc where a further sound sync error was baked into the transfer. It turns out the sound issues distracted me from the video transfer, which I said was good. It wasn’t good. Just because I saw some grain, and bit of rawness to the print didn’t mean that it hadn’t been fiddled with. In fact, Midnight Run had gone through the usual Universal DNR process that that they had been lavishing on their back catalogue to that point, and it turns out that a lot of grain, and a fair bit of detail had indeed been scrubbed away. It was the sound sync issue that got me looking to import a better version, but it was when I played this German release of Midnight Run from Koch Media that I realised just how wrong I had been about the image quality. 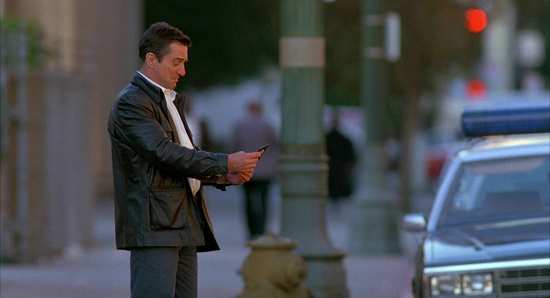 Jonathan "The Duke" Mardukas, having embezzled $15 million in mob money has jumped bail, leaving bail bondsman Eddie Moscone $450,000 out of pocket. Jack Walsh, an ex-cop turned bounty hunter has to get him from New York to LA in five days for a reward, but he has the FBI on his tail, wanting Mardukas to testify against mob boss, Jimmy Serrano. Understandably, Serrano wants the Duke dead, so Walsh moreover has to duck mob bullets. Also in the chase is fellow bounty hunter Marvin Dorfler, who`ll do anything to relieve Walsh of his charge. If these foes won`t kill the Duke and Walsh, maybe they`ll kill each other. 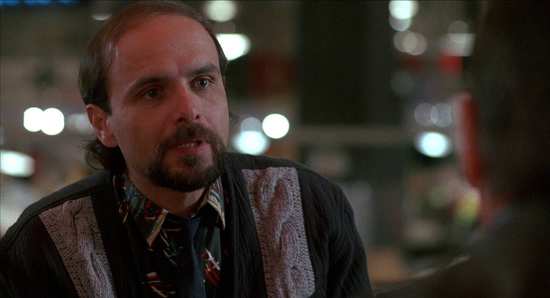 On this disc Midnight Run gets a 1.85:1 widescreen 1080p transfer, and I suspect that Koch Media have been completely hands off with the print. It’s alive with film grain, standing in stark contrast next to the Second Sight release, and there is so much more detail and clarity as a result. The film feels organic and natural, although the film stock of the period is a little soft. There is the odd fleck of dirt, but dark detail is significantly improved. The extra detail does have the unfortunate effect of adding moiré and shimmer to fine detail, and that is usually apparent in the weave of the Duke’s coat. 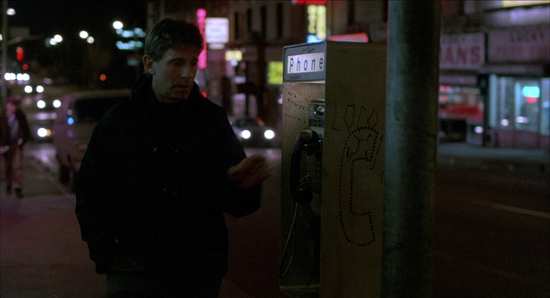 You have the choice of DTS-HD MA 5.1 Surround English, DTS-HD MA 2.0 Stereo English and German, and not listed on the menu, there is also a DD 2.0 Stereo German track. The most important thing is that the audio is in sync throughout the film, even at those points hard-baked onto the Second Sight disc. The surround track is just fine, a sympathetic broadening of the film’s original stereo track, which doesn’t force any effects or music to the rear speakers, just gives the film a little more space to breathe. You have the option of English and German subtitles. 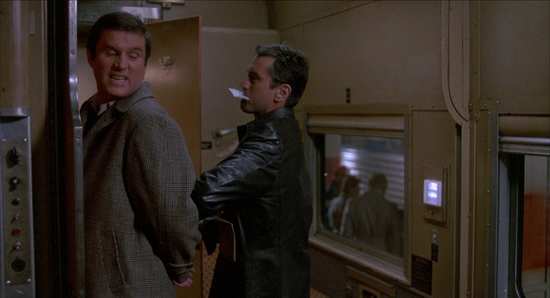 You get 1 disc in a thin BD Amaray case, and the sleeve is reversible if the large German ratings logo offends. 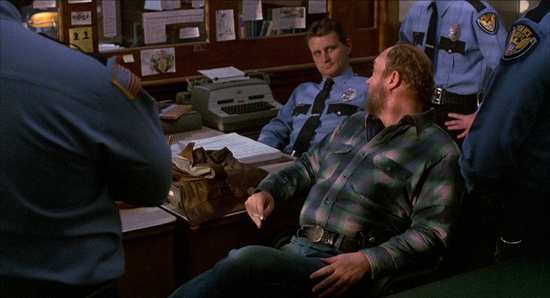 Also on this disc are the German trailer, the US Teaser, and the US Theatrical Trailer, all in HD.

Finally there is a slideshow promotional art gallery, with poster art from around the world.

Oddly enough, none of the video extras have German subtitles. Either the majority of German film fans are multilingual, or Koch Media knew that disgruntled fans from overseas would be importing the disc like crazy. 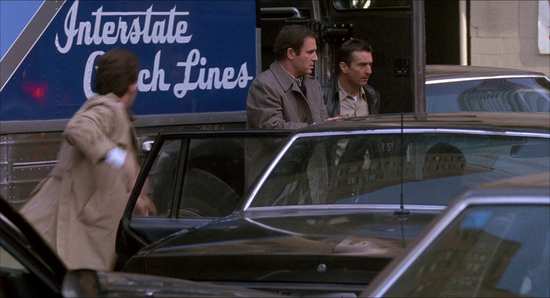 If you could bottle it, you’d be a billionaire. Once in a while, the stars align, you get the right script, the right director, the right actors, the right composer, and everything just falls into place to beget a classic movie. If you could understand how this all works, you could get films like this out on a production line, but it falls under that mysterious, indefinable, irresistible force that we call movie magic. Midnight Run is movie magic. It works, brilliantly, emphatically, triumphantly, one of the best movies of the eighties, a period rich with classic movies. 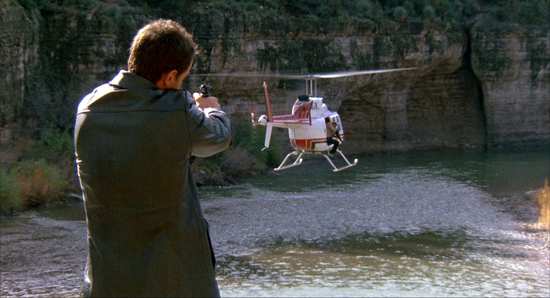 It’s a brilliant action movie, full to the brim with great stunts and set pieces. The story is simple, but effective; it combines the adrenaline of a chase movie with the wonderful vista and character development of a road movie. When it comes to the characters, Midnight Run has an embarrassment of riches, with it seems every character having a story to tell. You have the bail bondsman Eddie Moscone and his assistant Jerry in LA, desperate for Walsh to bring the Duke back. You have Marvin Dorfler as the simple and single-minded blunderbuss of a bounty hunter, always Jack’s rival for bounties, engaged in a tit for tat competition for the Duke. You have the brilliant Alonzo Mosely who wants the Duke so he can testify against the mob boss, and whose insecurity exponentially grows through the film after Walsh steals his ID. You have the mob boss of course, the wonderfully profane, menacing and smooth Jimmy Serrano, as well as his Laurel and Hardy goons Joey and Tony, who all want the Duke dead... 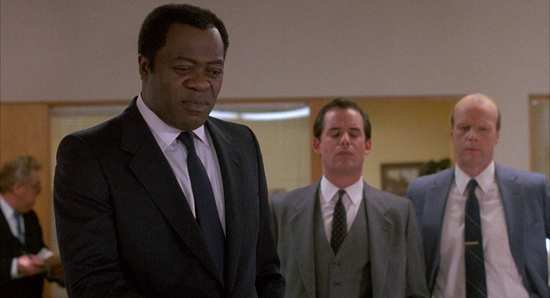 And at the heart of the film, driving it all is the odd couple relationship that develops and grows between ex-cop turned bounty hunter Jack Walsh, and white colour Robin Hood criminal Jonathan Mardukas. Walsh hates his job, wants one last score so he can get out, and away from the scumbags who try and blow his brains out rather than be captured, and a simple accountant would seem to be an easy way to score $100,000. Except Mardukas is infuriating in a whole other way, principled enough to steal from the bad and give to the needy, and harbouring a philosophy on life that he insists on imparting to his new captor as they travel cross country. What starts off as an initial antagonism slowly twists and distorts until they begin to resemble an old married couple, trying to find ways to annoy and niggle each other, even while they’re running from the FBI, the Mob, and Marvin. Then there is Danny Elfman’s score driving the pace of the film, with wonderful character themes and of course the memorable theme tune, all of which is another character in itself. Somehow one of the most engaging action movies of the eighties also turns out to be one of the funniest comedies of the eighties. 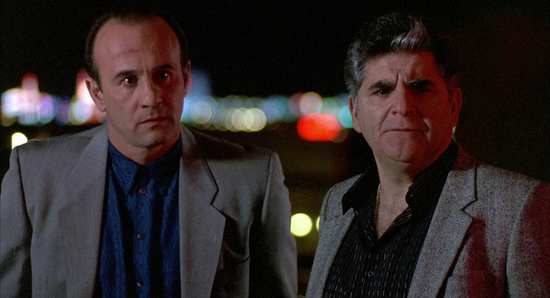 It does make you wonder just why Midnight Run didn’t explode into the consciousness the way it should have, why aside from three loosely related TV movies, there were no Midnight Runs 2, 3, 4 and so on setting box offices alight in the nineties... One other titbit I picked up from the extras is that Midnight Run opened on the same day as another, small, insignificant movie, a former TV star’s first attempt at cracking the silver screen, called Die Hard. The fate of opening nights aside, Midnight Run is one of the best movies of the eighties, still one of my favourites, and seeing it in high definition is surely a treat. 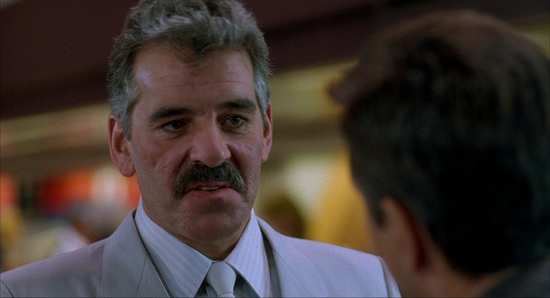 There is always going to be a process putting older films onto disc, no matter the resolution. There is the conversion from analogue to digital, the compression to squeeze it onto disc, and some sort of processing, restoration, or re-mastering to get it looking as good as possible. This whole Midnight Run thing convinces me that too little is always preferable to too much. Midnight Run on this Koch Media disc looks raw and unvarnished, and that is really very good.