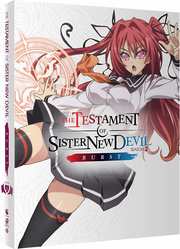 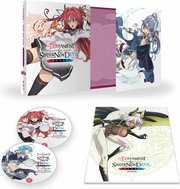 It’s not a proper fan service anime if it doesn’t have kettle drum noises every time there is booby bounce on screen. At least that was my opinion having watched countless fan service anime. But, Testament of Sister New Devil has lots of boobs on screen, bouncing and more, and there’s not one kettle drum played in the whole show. Then again, they’d be facing class actions from kettle drummers with R.S.I if they stayed true to convention. That’s about as intelligent an intro this perverted series deserves. 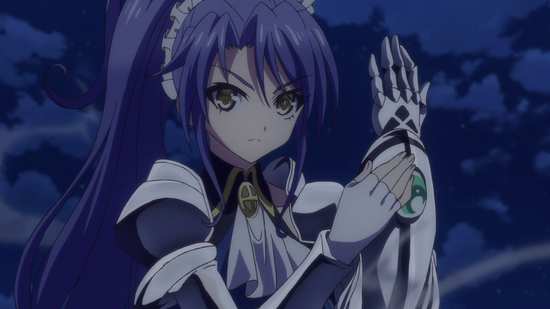 Basara Tojo gets a surprise from his dad one day. He’s going to be a brother. His dad is getting remarried (although his wife-to-be is working overseas), and Basara gets two step-sisters into the bargain. First impressions aren’t good during their meeting at a restaurant, when Basara walks into the toilet without reading the ‘out of order/knock first’ sign. Second impressions are worse when big sis Mio Naruse tries to be sisterly and wake her brother up for school, only little sis Maria Naruse has given Basara the kind of present that can only be misconstrued. Then his father has to go abroad on an assignment, leaving Basara home alone with Mio and Maria. It turns out that Mio and Maria have been keeping a secret from Basara. It’s only fair, as Basara has a secret too, one which makes the new ‘siblings’ perfectly suited to each other. 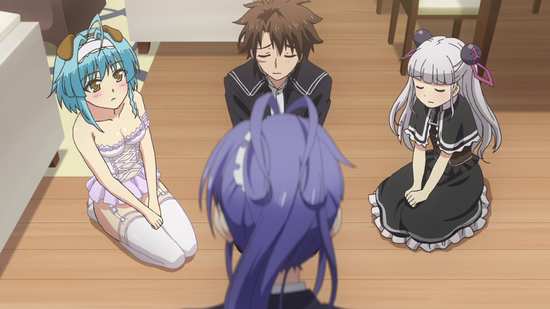 The boobtastic shenanigans continue with 10 episodes of Testament of Sister New Devil BURST plus an OVA, presented across two Blu-rays from All the Anime. And completely unlike High School DxD, Testament Season 2 sees its cast paying a visit to the demon realm. 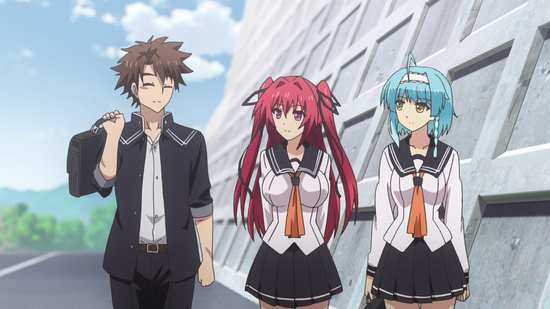 Disc 1
1. What I Can Do For You
2. Suspicions Deepening Within Mysteries
3. My Cherished Feelings For You
4. Amidst Entwining Plots
5. Amidst the Wind Blowing Through the Battlefield
6. Between Reality and One’s Own Truth
7. Between Entwining Plots and Desires
8. Those Contending for the Future

Disc 2
9. Beyond the Endless Dream
10. The Consequences of What Must Be Done
OVA. Tojo Basara’s Perfectly Peaceful Daily Life 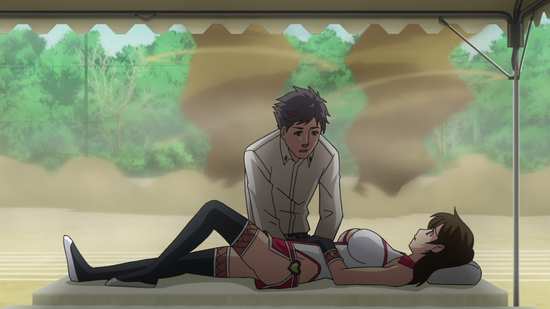 Testament of Sister New Devil BURST gets a 1.78:1 widescreen 1080p transfer on these discs, which is clear and sharp, with strong consistent colours. The animation is smooth and fluid, and there are no issues with aliasing, or visible compression, although banding is of a greater concern here than usual. The anime character designs are typically generic, but the emphasis is on the fan service, and the show makes the most out of the female characters’ assets. 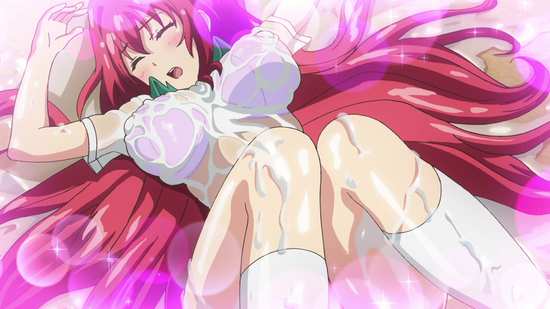 You have the choice between Dolby TrueHD 2.0 Stereo English and Japanese, with English subtitles and signs locked to the appropriate track. I watched the Japanese version, although what I sampled of the English dub sounded acceptable enough. The subtitles are timed accurately and free of typos. The stereo is sufficient in bringing across the comedy, and the occasional action sequence. The music suits the show well, without really standing out, and the theme songs are definitely skippable. 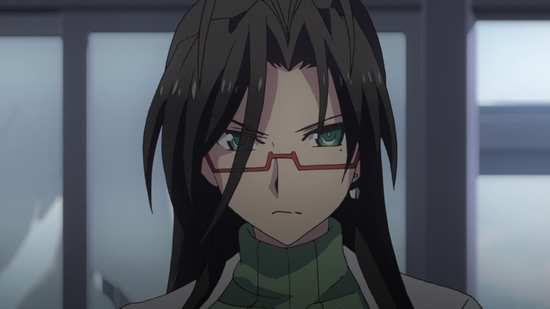 Disc 2 autoplays with a trailer for Tsugumomo. 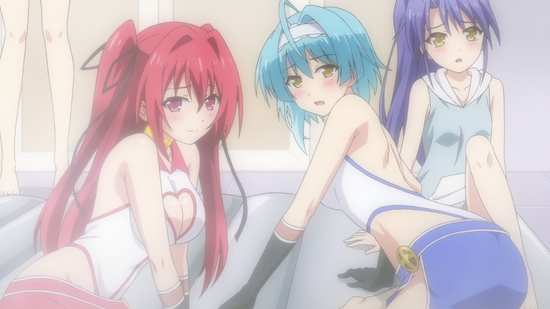 The big extra feature is the Maria Secret Video BURST Collection, of which there are 5 this time running to a total of 22:34. Basically it’s a collection of the saucy scenes from the show, this time with colour commentary from Maria and her ‘guest’, usually Mio.

You get the Textless Credits (with locked subs), and trailers for Omamorihimari, High School DxD Born, Rosario and Vampire, Dragonar Academy, and Twin Star Exorcists. 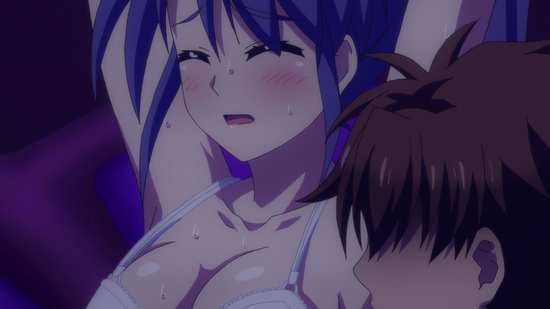 Why me! I know, this is the penance I must pay before I get to watch the good stuff. I know full well that the softcore ecchi anime is the bait that draws many a teenaged male to the honeypot that is anime, and once they’ve seen the pleasures of a ridiculously animated booby bounce, they might stick around for the more thoughtful stuff as well. After all, this is how I got into the medium too, a young, over-hormoned male snagging a copy of Urotsukidoji, and finding that he preferred Cyber City instead. But I have seriously outgrown this stuff, the bargain basement tits and ass anime. 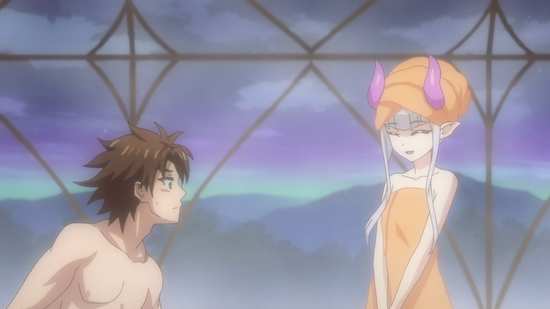 Not that I can’t appreciate a good ecchi show. But it has to have character, it has to have story, it has to have a sense of humour, and it has to be charming. Testament of Sister New Devil was none of these things, just a collection of wholly un-erotic animated softcore scenes loosely hanging together by a plot thread. When I reviewed it, I gave it the benefit of the doubt, sure that it would find its target audience. Now the second season comes along, and Testament of Sister New Devil BURST trips the flag, it crosses the line where I can tolerate its mindless harem perversions and obsession for oversized breasts, and becomes a series that I loathe. It does the sibling incest thing. 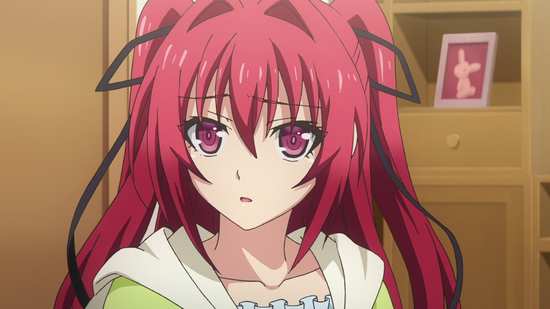 If you’re going to challenge a taboo, be smart about it, be intelligent, give me a narrative I can get behind, characters I can invest in, and realistic drama. Testament is an ecchi harem soft sex comedy. So when sisters Yuki and Kurumi get frisky with each other while letting Basara remould their breasts into new, interesting and painful looking shapes, it’s just another anime show letting over-aged, unemployed, single males get their rocks off to an ‘edgy’ fantasy. I know full well that’s a gross generalisation and probably an offensive characterisation of Testament’s target audience, but I really do hate this one trope in modern anime, and much to my lament, it shows no sign of dying anytime soon. 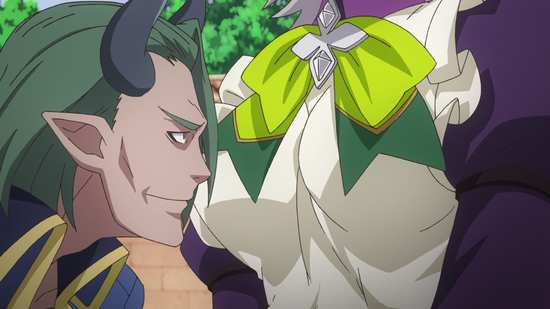 So, gods demons, monsters and heroes. Testament comes off like a poor High School DxD clone, and BURST takes the similarities even further when its characters have to visit the demon realm for much of the season and get involved in some local politics. Mio is heir to the former demon lord, and possesses power that everyone covets. Hence a tournament fighting arc with the current Demon Lord and his minions, while all the while the demon council plot and scheme. And with Basara’s hero power levelled up with every girl he makes submit, and how often he does so, you can bet that he adds more booby girls to his harem, and gropes them on a regular basis. 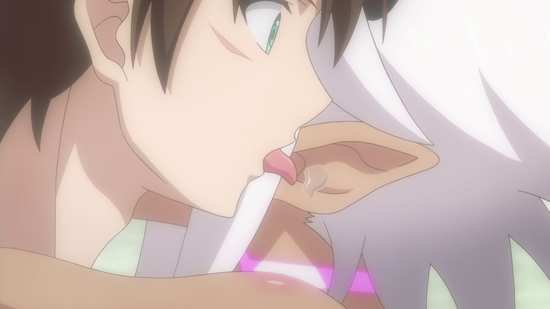 There’s a lot of animated nudity, painful groping, and sucking of ‘bits’ but all of the characters somehow manage to avoid having actual sex. And in between some plot might happen that honestly no-one will care about. You’re either in this show for the softcore, in which case the narrative only gets in the way, or you might care about the nonsensical story, and you’ll be put off by the ‘meat slapping together’ sound effects that take up ten minutes of each episode. 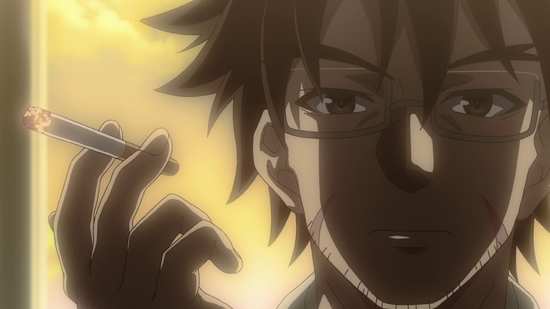 Last time I tried not to be judgmental and took it on faith that the show would satisfy its target audience, even if there is plenty better out there (Rosario and Vampire for one), but Testament of Sister New Devil BURST crossed the line. If I never see this show again, it’ll be too soon.