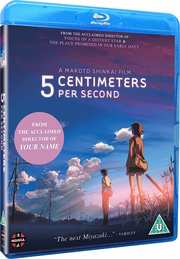 Review for 5 Centimetres Per Second

We finally have the last piece of the Shinkai puzzle, 5 Centimetres Per Second on Blu-ray in the UK. It has increasingly seemed the odd one out. Garden of Words, and Journey to Agartha (Children who Chase Lost Voices) got high definition releases, and Your Name practically exploded out of the stratosphere. All the Anime also went back and gave Voices of a Distant Star and The Place Promised in Our Early Days a Blu-ray release. But this film stood out like a sore, SD thumb. It’s odd, as when Manga first acquired the licence back in 2009, they promised us an HD release. They spent the better part of two years trying to get it as well, but in the end, we, just like the rest of the English speaking world had to settle for 5 Centimetres Per Second on DVD. 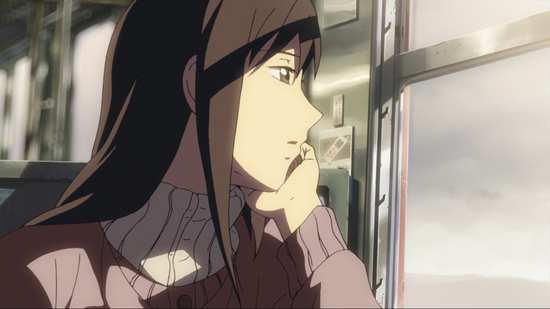 The reason why this was is down to Japan, as Comix Wave decided in 2011 to give the film a global Blu-ray release. 5 Centimetres Per Second got a Japanese Blu-ray with English assets, a host of multilingual subtitles, and Voices of a Distant Star, as well as She and Her Cat. They wanted everyone to buy that version, and given that the RRP was at typically Japanese prices around £50 (It’s currently available from TRSI for $85), the last thing they needed was a US, or UK version selling at a third of that price undercutting it. I guess six years was enough for them to make as much profit as they could from that release, as they’ve finally allowed localised versions. Discotek Media released their Blu-ray in the US last year, and now finally, Manga Entertainment can give the UK 5 Centimetres per Second in high definition. 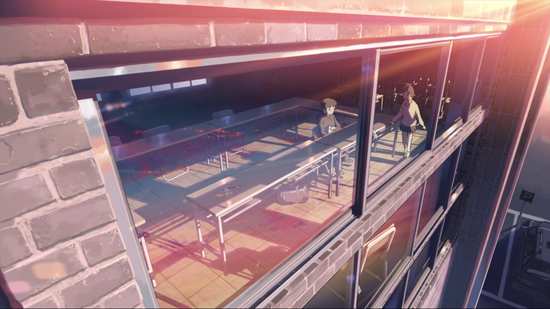 Cherry Blossom Story
Takaki Tono and Akari Shinohara are best friends and childhood sweethearts, outsiders drawn together by shared experience in junior school. And at that young age possibilities seem limitless, the future seems impossibly far away, until real life comes crashing down when Akari has to move to a new town. They remain committed pen pals, and promise to meet up next spring, when the cherry blossoms next fall. Only the next year it becomes even worse, as Takaki has to move even further away, to the distant island of Kagoshima. It will probably be their last and only chance to meet again, and it means a long train journey just for Takaki to get there. But then the snow starts to fall. 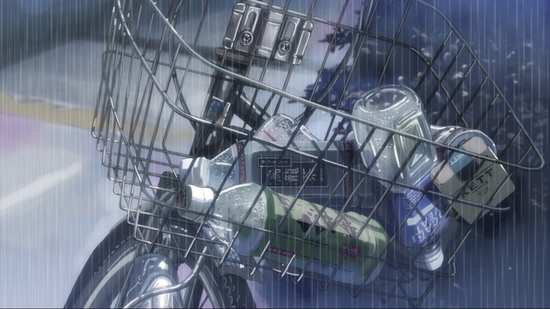 Cosmonaut
Takaki Tono is a senior in high school, about to graduate and with a world of opportunities open to him, and his aim is to leave Kagoshima Island and head to Tokyo to study. His classmate Kanae Sumita has a serious crush on him, and keeps trying to work up the courage to confess her feelings to him. She’s also trying to figure out what to do next in her life, and learn how to surf. Yet no matter how nice Takaki is to her, there’s something about him that is ever distant. 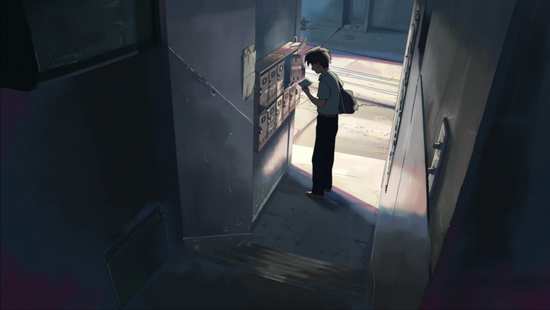 5 Centimetres Per Second
The cherry blossoms are falling in Tokyo, but Takaki’s life seems to be in a cul-de-sac. He’s just split from his girlfriend Risa, he’s quit his job, and he’s questioning his whole direction in life. His thoughts turn to that girl he once knew. At the same time, Akari Shinohara is about to get married, when she finds a letter she once wrote to Takaki Tono, but that she never posted. She too begins thinking about the path not taken. 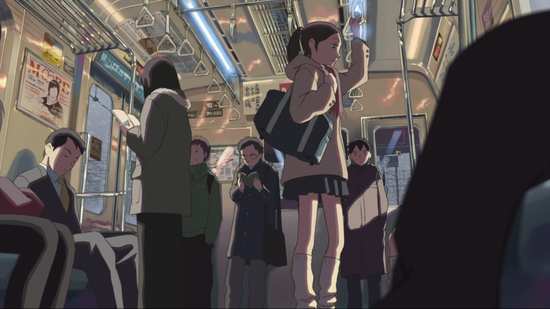 5 Centimetres Per Second finally gets a 1.85:1 widescreen transfer at 1080p resolution. It’s delightful seeing this film in high definition, a clear and sharp transfer with no signs of compression or aliasing, and just the slightest hint of digital banding in darker scenes to complain about. Shinkai’s medium has always been one of colour and light, and how this film now looks in HD is spectacular and breathtaking. This is an animation that just has to be seen, as no description of mine will do it justice. The attention to detail is breathtaking; the character designs are nice, and more realistic than the average anime. And what Makoto Shinkai does with light, reflections, shadow, and colour is simply astounding. 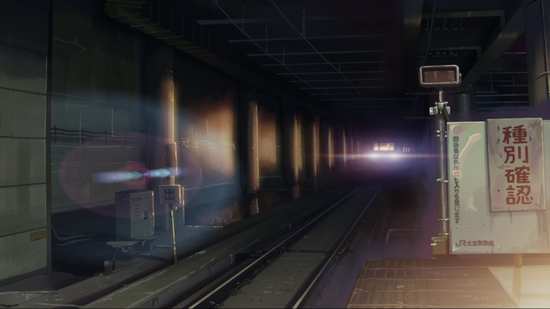 You have the choice between PCM 2.0 Stereo English and Japanese, as well as DTS-HD MA 5.0 Japanese (which the menus list as a four channel track). The surrounds are used well to offer some immersion, but the film is predominantly dialogue-centric and front-focussed. The ADV dub has been consigned to history, and this one merely reuses the Bang Zoom dub. The subtitles are big and yellow, which doesn’t really sell the animation all that well, but you can’t say that they aren’t legible. I didn’t notice any typos this time around, and they are accurately timed. 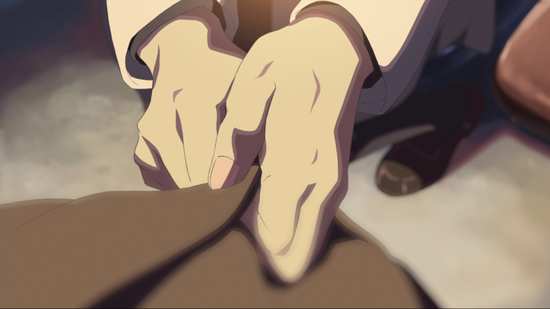 It looks like we get a Region B re-working of the Discotek disc, which boots to a static menu on insertion.

New to this release are the feature length Storyboards, running to 63:22 and presented in SD format. 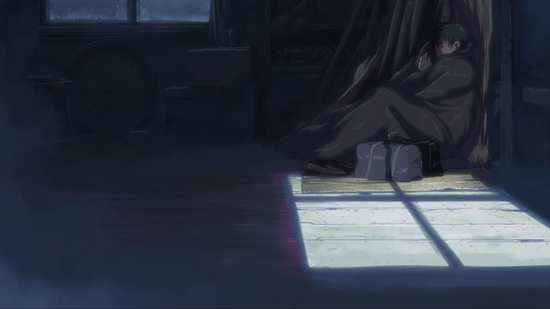 Once again, you get the Makoto Shinkai Interview (36:28), and this time presented as one featurette, the Cast Interviews running to 37:28, both in SD.

You’ll have to hold onto that DVD release for the Making Of Montage. 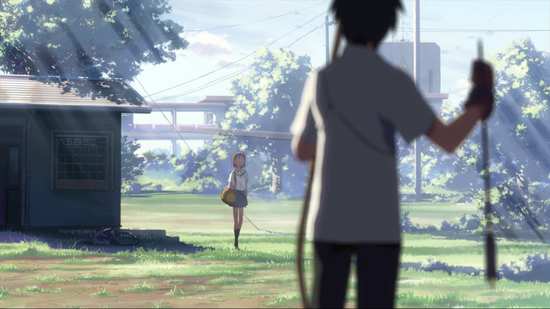 If you’re looking for a story, a beginning, middle and end in the traditional sense, then you’re looking in the wrong place. 5 Centimetres Per Second is more an emotional narrative than conventional storytelling. It’s about feelings; it’s about capturing moments in time, about finding something in everyday existence that people can relate to, yet presenting such feelings in a grand and operatic manner. That’s in no small part accomplished by the magical visuals, the breathtaking beauty of the film. As Makoto Shinkai says in the interview, it’s not about presenting the reality of a location, but presenting the memory of a reality, which will be tinged by the emotion of the moment. 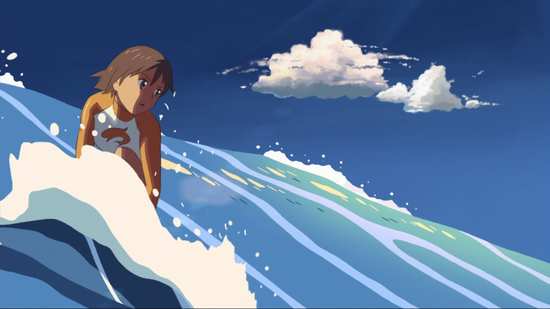 It also makes 5 Centimetres Per Second difficult to review in the traditional sense, because everyone who watches it will probably react to the event portrayed in different ways. In addition to that, watch it on different days, and your feelings towards the film will be affected by how you are feeling at that particular moment. Feel good about the world, and there is much that will lift and inspire you, feel down, and you’ll find something to reflect your pessimism. What’s fascinating is that even while this is a series of moments, set years apart, there is something of a narrative flow to them. The stories are connected after all. More importantly, even though we only get small snapshots into these lives, there is enough here to invest us with the characters, you feel their hopes and fears, sympathise with their trials, cheer them on as they try to connect to each other. 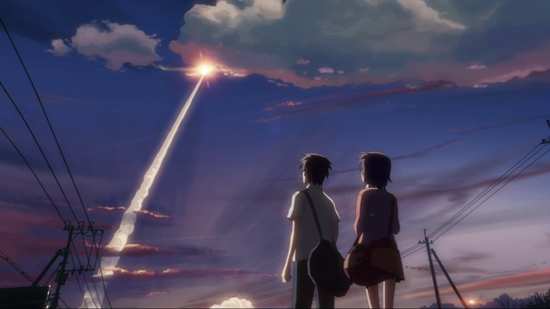 Being a cynic, and inexorably diving towards middle age, I found the message of 5 Centimetres Per Second to reflect that cynicism, describe a loss of innocence, and an increase in bitterness that comes with age and experience, also reflecting the shells that people build around themselves, to avoid being hurt. And then they look back on their youth with a sense of loss. The first story captures Takaki and Akari when they were 13, an age when everything seems possible, while the smallest impediment seems like a mountain to climb. They are best friends torn apart by circumstance, with one last chance to meet, but it looks as if they won’t be able to. But at that age, there is still a belief in fairy tales and happy endings, and the single-minded determination to make those endings come to pass. 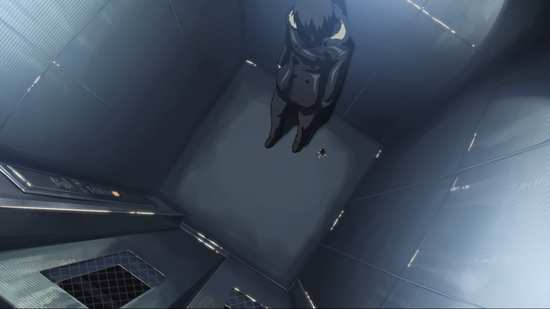 Not so much at age 17, where people have started to wall their feelings off. There’s still a cute sense of awkwardness about the way Kanae tries to get close to Takaki, to try and confess her feelings. But her awkwardness is bound up in all aspects of her life, the crossroads coming where she has to choose about her future, and even the comparatively trivial desire to learn how to surf. At the same time, Takaki remains distant, eyes always focusing elsewhere. He’s still corresponding with Akari, but by this point, the distance is beginning to tell in their friendship. 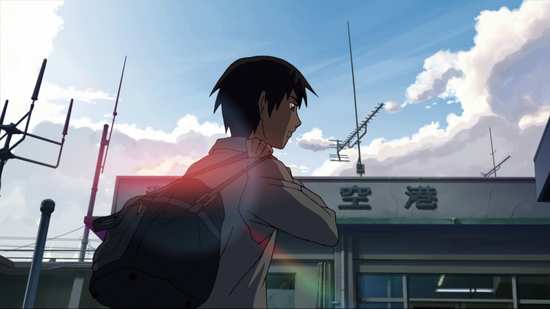 There’s something surprisingly sad about the final segment, and it’s not just that we catch Takaki at an emotional low point in his life, career stalling, and relationships ending. It just feels so disappointing that in their mid-twenties, people are already looking back on their childhood as a lost age of golden dreams, of boundless optimism. To be worn down by life at that young age seems desperately unfair. Yet it is because we are just capturing moments, with Akari’s impending marriage, and Takaki’s depression that it seems that way. But what is evident is that innocence of childhood, that belief that anything is possible if you want it enough, is by now a forgotten thing, the realities of life have made such beliefs impossible. But even with that realisation, 5 Centimetres Per Second reminds us that the most important thing of all, hope, is something that we never lose. 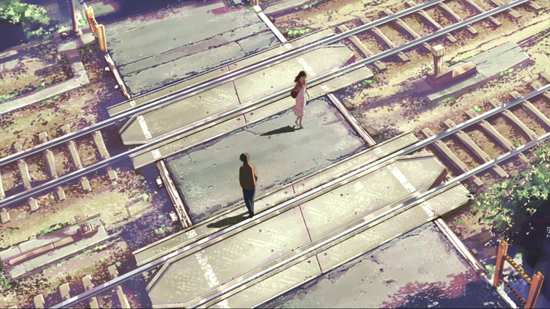 5 Centimetres Per Second is an achingly beautiful film, but despite that, or maybe because of that, it’s a film that will break your heart. But it will do that in the best possible way. It’s a film that everyone should see, anime fan or not. And finally we get to see the film in the best way possible, in high definition. It’s a long overdue release, but that doesn’t make it any less appreciated.