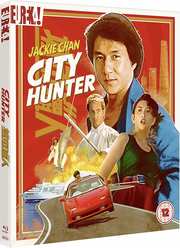 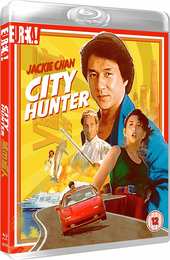 What’s surprising is that I haven’t reviewed City Hunter already; after all it collects two of my areas of interest, anime/manga and Jackie Chan. Indeed when I first heard of the film it was three areas of interest, videogames as well, which I still wasted hours upon at that time. My first PC had a furtively downloaded Quicktime clip from the film of that specific Street Fighter II scene, as I felt that I ought to have evidence of Jackie Chan as Chun Li. It’s the kind of thing that no one in their right mind would believe. Truth be told, when the film was briefly available from Hong Kong Legends and subsequently Cine Asia, while my finger hovered over the order button, I could never get myself to press it. I never heard good things about City Hunter. But a review disc only costs time, thought, and wearing a few microns off my keyboard. Now that Eureka Films are giving City Hunter the HD treatment on Blu-ray, sourcing a 2k restoration, I can finally see what this film is really like. 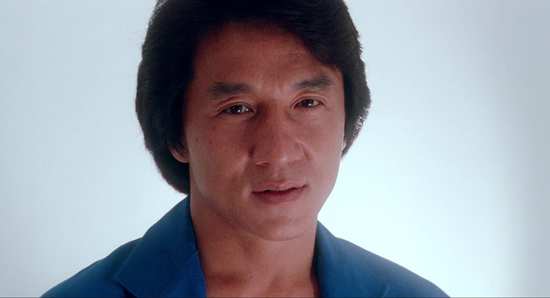 It’s a timely release too, as there’s a new City Hunter live action movie coming out next year. They love City Hunter in France, where it’s known by the main character’s French name, Nicky Larson. Keep an eye out for the trailer for Nicky Larson et le parfum de Cupidon doing the rounds now; it looks pretty nifty. The real question is if Jackie Chan’s take on the womanising, sharp-shooting, private detective is just as nifty. Of course the slight fly in the ointment is that of all the anime I’ve seen, all the manga I’ve read, I’ve never experienced the original Japanese take on City Hunter. No compare and contrast here; I just have to take this 1993 film at face value. 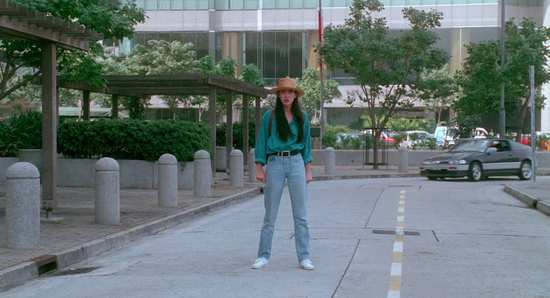 Ryu Saeba is a private detective with an eye for the women. His partner’s dying wish was that he look after his little sister Kaori, and promise never to seduce her. The promise was easy to make, but then Kaori grew up. She’s his full time assistant now, making sure that he’s awake to make his appointments, but there’s only so much she can take of his womanising. Ryu’s latest job is to track down and return the runaway daughter of a newspaper magnate, Kiyoko Imamura. She’s found her way onto a luxury cruise, so has Kaori, whose finally snapped and decided to take a vacation from her philandering boss. There are also a couple of undercover policewomen, a lethal card sharp, and a whole bunch of billionaires determined to have a party. Ryu has to stowaway on board to get to Kiyoko, but also on board are a gang of terrorists, intent on kidnapping a ship load of billionaires and killing everyone else. 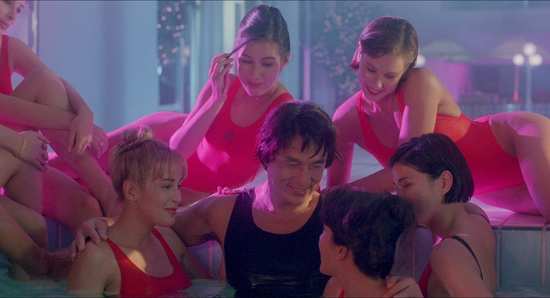 City Hunter gets a 1.85:1 widescreen 1080p transfer on this disc, and the film looks pretty good. The image is clear and sharp throughout, colours are consistent, and detail levels are strong, while signs of excessive processing and DNR are absent to my eyes. City Hunter isn’t the greatest looking film though, with a production and costume design that focuses on a ‘cartoon’ aesthetic. That coupled with the eighties fashions means a collision of primaries and pastels that can feel a little odd. But it’s watchable enough with no obvious flaw. 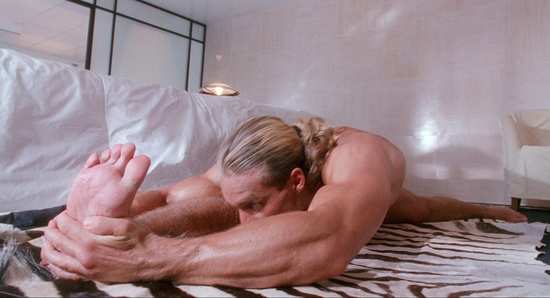 You have the choice between DTS-HD MA 5.1 Surround Cantonese and English, PCM 2.0 Stereo Cantonese, and PCM 1.0 Mono Cantonese and an alternate English dub at 1.0 as well. I gave the 5.1 Cantonese a try and it felt forced, but as the film was released in stereo, that option was a lot more organic and natural. The dialogue is clear, and the action comes across well, although the music is a little quirky at times, switching from a modern eighties/nineties movie sound to vintage silent movie comedy antics at the drop of a hat. The subtitles are timed accurately and are free of typos. Incidentally, there are two subtitle tracks on here, one which doesn’t subtitle the Gala Gala Happy song as the producers intended, and one which does, in case you want to know what nonsense they were spouting. 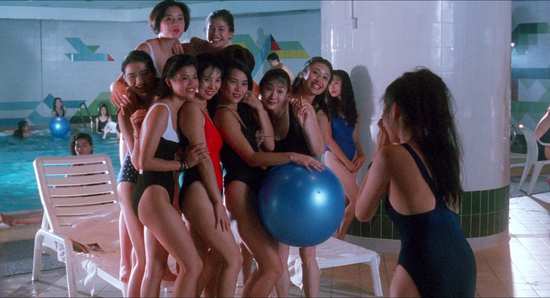 The disc boots quickly to a static menu. I haven’t seen the final retail package to comment on the first release slipcover or accompanying booklet.

The disc brings forth some extras from the HKL and Cine Asia releases, but as seems to be Eureka’s approach, it ditches the Bey Logan commentary. 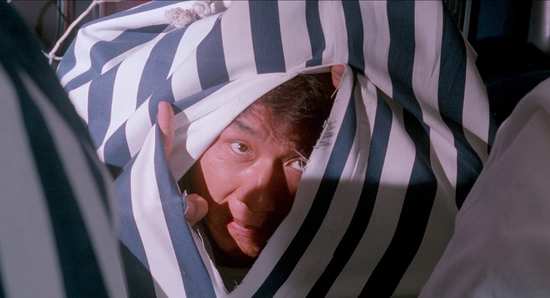 There are two interviews with Jackie Chan, one lasting 10:06 and the other lasts 3:30.

Director Wong Ling gets a 7:13 interview, while stuntman Rocky Lai gets a 10:58 interview, the latter alone on this disc in Cantonese and subtitled. 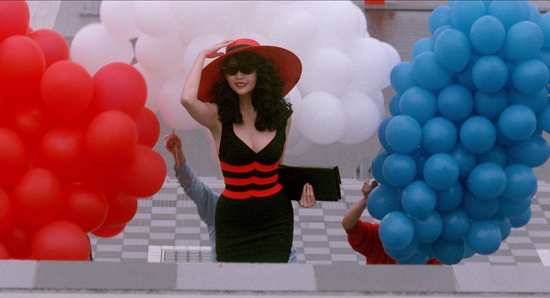 The Outtakes Music Video lasts 2:35, the Outtakes Montage lasts 4:38, and the Japanese Ending Credits lasts 3:36. To round the on-disc extras off, you also get two versions of the movie trailer. 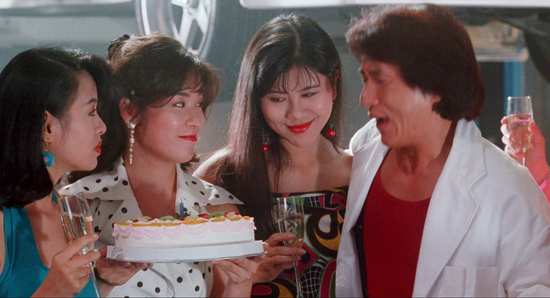 Terrorists on a cruise ship? This doesn’t bode well. Thankfully I’d rather watch City Hunter than Speed 2 Cruise Control, but that’s not exactly a high bar to reach. City Hunter all hinges on whether you can buy Jackie Chan as a womanising letch. It’s a character trait common to many manga protagonists from the seventies and eighties; think Ataru Moroboshi from Urusei Yatsura, Lupin, Sanji from One Piece, Muten Roshi from Dragon Ball, Happosai from Ranma, and you’ll find City Hunter’s Ryu Saeba at the top of the list. Try as he might, Jackie Chan’s on screen libido is no match. He’s simply Jackie Chan. Early on in his adventures aboard ship, hunger strikes, and he spends the rest of the movie trying to find something to eat, rather than perv at all the women around him. 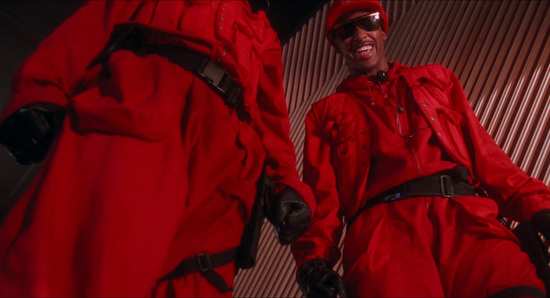 You might think for a moment that City Hunter is an odd choice, but Japan is the first overseas territory where Jackie became a megastar, and it would have made business sense to adapt a Japanese property. The problem comes in the adaptation, and City Hunter makes the mistake that adapting a manga/anime means making a live-action cartoon. It’s Jackie Chan’s version of Dick Tracy, set in a world where cartoon physics apply, and where everything has to be as wacky and as zany as possible. The comedy is broad and over the top, and as a result, can on occasion fall flat. I certainly didn’t get any laughs from Kaori’s lecherous cousin, while the brutality of the terrorists sat at odds with their silly antics. 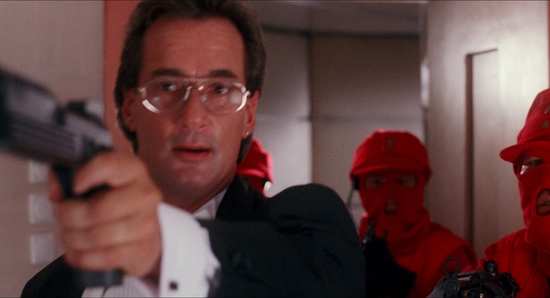 You’re left hoping for the action to live up to the usual Jackie Chan standards, and thankfully in City Hunter it does. Once more this film is full of inventive action sequences, and delightful slapstick. There’s a fight sequence in an on-board cinema against footage from a Bruce Lee film, and the way the action is choreographed is wonderfully ingenious. Then of course there is that outright insane Street Fighter II sequence, for which I finally got an explanation by watching the film. It’s just as nuts as I recall, and I still don’t believe that Jackie was Chun Li! 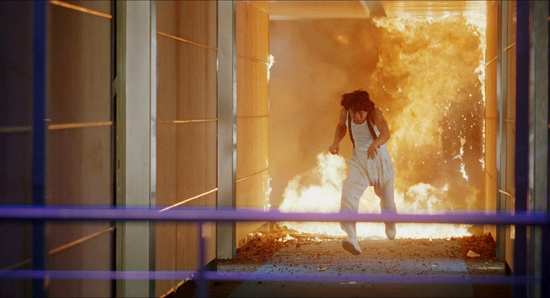 That’s not much of a tagline to hang a movie on, but City Hunter is better than Speed 2 - Cruise Control. It’s watchable, entertaining enough, the action is top notch, but this is hardly top-tier Jackie Chan. I tell you one thing, I do want to see that French Nicky Larson film next year though, and hopefully it gets an English localisation and release.