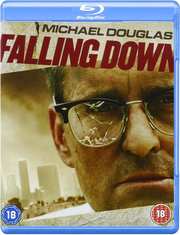 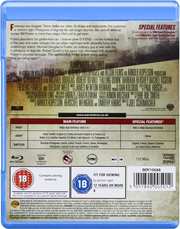 Review for Falling Down

D-FENS for president! I remember when this film was originally released, there was a sense among some people that D-FENS approach to dealing with problems was one that many politicians ought to take. He was a middle-class white man dealing with the problems of the then modern America by bull-headedly walking through them, dealing a few well-aimed brickbats. Of course there was no way such a character could work in the real world, but there was a vicarious thrill at seeing him say what we all wanted to say when faced by a fast food order than never resembled the picture on the menu. I still get those vicarious thrills watching this film, probably even more now given that I’m of an age where complaining about the world is traditionally expected. The single layered UK DVD is certainly worth complaining about, so I took the opportunity to upgrade it to HD, and ordered the Blu-ray.

A seemingly mild mannered office worker is caught up in a traffic jam in the sweltering LA heat. With the incessant noise and claustrophobia as well as a lack of air conditioning taking their toll, he just snaps, gets out of his car leaving it in the gridlock and starts home on foot. Not far behind in the same jam is Prendergast, a policeman on his way to his last day of work, and seeing the foul up he gets out to clear the highway. He notices the unusual number plate of the abandoned car, D-FENS but thinks little further of it. Meanwhile, D-FENS has decided to visit his estranged wife and daughter on her birthday, and his route to their house is going to take him through the worst part of town. First he needs some change to call his ex-wife. Fortunately there is a convenience store nearby…

Falling Down gets a 2.40:1 widescreen 1080p transfer on this Blu-ray, and the best thing I can say about it is that it is miles better than the poor quality DVD, and if you like the film, it’s a no-brainer to upgrade. Having said all that, this isn’t a great transfer, one of those back catalogue titles that got post-processed for HD presentation, probably from the same source as the DVD. The practically non-existent grain indicates heavy DNR, pretty much confirmed by waxy skin tones throughout. As such, detail levels are good, but they could be a lot better. But the image is clean and stable throughout, and colour rendition is positive. Falling Down has looked better, but that was in the cinema in the summer of 1993.

You have the choice between Dolby TrueHD 2.0 Stereo English, Dolby Digital 2.0 Surround English, French, Italian, and Spanish, as well as Dolby Digital 1.0 Mono Latin Spanish and Portuguese, with subtitles in these languages as well as Dutch, Danish, Finnish, Swedish, and Norwegian. The audio is effective enough, but the volume levels are probably the lowest of any Blu-ray I’ve got. I almost had to hit the maximum on my home cinema for it to be comfortable. The stereo is effective, especially given a little prologic.

You get one disc in a BD Amaray, and it plays a generic Blu-ray disc trailer before autoplaying the movie. There is no main menu, and after the film ends, it shows a static menu for the extras.

The UK DVD came with no extras at all, but the Blu-ray has the extra features that originally appeared on the US Deluxe Edition DVD.

It may be listed as a Commentary by Michael Douglas and Joel Schumacher, but in reality it’s a patchwork track with contributions from several of the cast and crew, and in reality it’s not that interesting to listen to.

Far more interesting is Deconstructing D-Fens: A Conversation with Michael Douglas, which is a 2009 retrospective look at the character. This lasts 10:11 and is in 480i.

Also in SD format is the film’s theatrical trailer, which lasts 2:31.

You can guess what the punchline to this review is. D-FENS is president, or at least someone whose approach to America’s problems involves the same form of tactless steam-rollering. At least D-FENS is erudite and coherent and consistent in his opinions. The film kindly took the audience on the uncomfortable journey with D-FENS, from appreciation and sympathy to horror and disgust. The real world is never so kind.

On many levels, Falling Down is a cathartic rant that appeals to the grumpy old man in all of us. You can certainly enjoy seeing D-FENS sticking it to the establishment in the way he does, and he does give equal attention to various bugbears of modern society. Indeed his first port of call was the cause for much of this film’s controversy. Due to unfortunate timing (or fortunate if you are a publicist), the release of Falling Down coincided with the LA riots, where several Korean businesses were trashed. D-FENS first tirade against rampant inflation just so happens to take place in a Korean convenience store.

On his way home, D-FENS speaks for all of us on several subjects, against gang violence, persistent beggars, loud obnoxious men, upper class golfers, and my two particular favourites scenes, road works and fast food. Falling Down does this with a wicked sense of humour and an ambiguity that has you wondering for a while if D-FENS is the good guy or the bad guy.

Michael Douglas is brilliant as D-FENS despite the haircut, and contributes much to the ambiguity of the character. He’ll have you cheering for him one minute, and then leaves a sour taste in your mouth as he goes just that step too far the next. Robert Duvall is cast as the clichéd cop on the verge of retirement, Prendergast, but gives an excellent and quirky performance as the man who connects the dots and realises who is causing the mayhem in LA, when his superiors are just looking to see the back of him.

But there are downsides to Falling Down; most prominently is the typical studio cop-out that dilutes the message. As the film starts, we are introduced to D-FENS as an average guy who just can’t take it anymore, a ‘there, but for the grace of god’ character, an everyman that represents the anarchist in all of us. It would have been more thought provoking to keep that good guy bad guy ambiguity right to the end. However, during the course of Prendergast’s investigation, we have the blanks of D-FENS’ past filled in for us, every little detail, so that when D-FENS finally wonders in surprise that he is cast as the villain of the piece, he is the only one so surprised. The audience has already been led down that path ages ago. This also serves to reinforce the conservative establishment message that the little guy can never win, just bend over and take it like the good little consumer capitalist that society has trained you to be and don’t even think about complaining, the Corporations win every time.

One final drawback is the homophobic, Nazi, white supremacist army-surplus storeowner who D-FENS confronts. This has to the most unlikely caricatured role in the film that has traces of every kind of bigotry known to man; he just jars the whole feel of the movie, and feels like a sop to the liberal establishment.

Disappointing character development aside, Falling Down is a sharply scripted and brilliantly performed film that will appeal to many. Oft-times hilarious and with biting satire, all that dates the film is the lack of rage against social media. The DVD was rather a poor disc from early on in the format’s life, and so is the Blu-ray. Fortunately, the Blu-ray is a lot better to look at than the DVD.