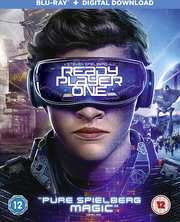 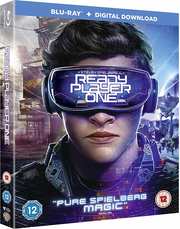 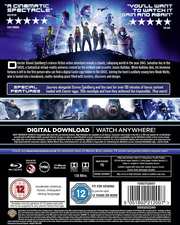 Review for Ready Player One

Star Trek the Next Generation debuted when I was a kid, and introduced the new toy of the holodeck, an early implementation of virtual reality in entertainment, albeit one that didn’t need goggles, or being plugged into a Matrix. It wasn’t long before geeks were asking each other what dreams they would make real on a holodeck, and predictably the answers would involve some poor schlub cleaning and disinfecting said holodeck afterwards. Me, if I had a holodeck, I’d play X-Wing! That is the ultimate dream of virtual reality, the promise that even now is yet to be realised, that of giving people any world that they want to experience, and given how much of our collective consciousness has been influenced by TV, movies, games, books and music, that’s a lot of fictional reality to play in. Steven Spielberg’s most recent feature, Ready Player One, based on the best-seller by Ernest Cline, delivers a future where this is indeed possible.

In the year 2045, the world is a somewhat run-down place, but that’s alright, as people have the OASIS, a virtual world where they can meet, interact, and have fun. People spend their lives there, only slipping out to do mundane things like eating and sleeping. For Wade Watts, who lives in The Stacks in Columbus, Ohio, the OASIS is the only place he feels alive.

The OASIS was created by genius James Halliday, and after he died, his avatar announced a competition. Whoever finds three keys hidden in the virtual world will inherit control of the OASIS, as well as a mega-fortune. After five years of trying, no one has even managed to find the first key. But when Wade finally deciphers the first clue, he opens the floodgates of Egg Hunters once more. Worse, he re-energises Sorrento, owner of IOI, a company that will do anything to take control of the OASIS. Soon Wade and his friends are fighting for their lives, both within the OASIS and without.

The film gets a 2.40:1 widescreen 1080p transfer on this Blu-ray, and you have the choice between Dolby Atmos (7.1 core) and DTS-HD MA 5.1 English, Dolby Digital 5.1 Spanish, Italian and English Audio Descriptive, with subtitles in these languages, Danish, Finnish, Greek, Norwegian and Swedish. It looks and sounds fantastic. The image is pixel perfect, and the audio is immersive and does full justice to the action, while keeping the dialogue clear. There is a whole lot of CGI in the film as you might expect, but you never really notice it, the story draws you in and you forget the technicalities of the film’s production.

You get one disc in a BD Amaray with an o-card slipcover replicating the sleeve art and blurb. There is also a digital download of the film available in the case. The disc boots to an animated menu.

The ‘80s: You’re The Inspiration lasts 5:38 and looks at Ernest Cline’s book.

The big making of featurette is Game Changer: Cracking the Code, which lasts 57:22, and is your standard behind the scenes documentary with plenty of talking heads.

Effects For A Brave New World lasts 24:39 and lets you see the digital artists at work.

Level Up: Sound For the Future lasts 8:03 and looks at the audio design of the film.

High Score: Endgame is a 10:04 featurette which offers a look at Alan Silvestri and orchestra as they create the music for the film.

Ernie & Tye’s Excellent Adventure lasts 12:00, and the film’s writer and star talk about the film.

Spielberg never does commentaries, but you might be hoping for deleted scenes or gag reels. But think about it. Actors in mo-cap suits in empty warehouses do not decent deleted scenes make.

“So we’re going to make this adventure movie. We’ll need 50 million for the production, 100 million for post-production; there’s a hell of a lot of CGI...”

I did enjoy Ready Player One, but I really am in two minds about it. Steven Spielberg has once more created a wonderful, family adventure movie, which was it not for one rather egregious f-bomb, would even be suitable for leaving younger kids alone with as a 2-hour babysitter. It’s a classic tale of the little guy standing up against ‘The Man’. Admittedly the idea of a dystopian world where the human race has retreated into an online fantasy gave me pause, although ultimately this film addresses that point as well, but for Wade Watts, the OASIS is his world, a world he has to fight for when the creator’s competition gets out of hand. As usual it’s a corporation that wants control of the OASIS, an egalitarian and free digital utopia, to commercialise and monetise (and to prove they are really evil, IOI is the kind of company that puts debtors to work as digital slaves).

For Wade the OASIS was just an escape, but after finding the first key to the ultimate prize, he becomes a target for IOI, drawn into their intrigue, so he and his friends have to work together to save the OASIS from them. This being a digital realm, populated by avatars, all of this happens in the form of games and battles. Spielberg once again explores the theme of dysfunctional families, and the heart of the film really comes across in the relationships and friendships between the main cast. With all of the action and spectacle, Ready Player One is a delightful action adventure film that in terms of entertainment value is up there with Spielberg’s finest.

But, there’s the other mind, the critical mind, the mind that has long insisted that originality in Hollywood has died. This may be the ultimate film expression of unoriginality, a movie that has as its very core the idea of pop culture and recycled imagery. Putting aside the oddity that everyone in 2045 is a fan of the 1980s (what’s wrong with Britpop?) this film has so many references, and character cameos that it all blurs into a nothingness of nostalgia. Other than the hero vehicles like the DeLorean, Kaneda’s motorbike, the Gundam, and the Iron Giant, none of what’s in this film actually matters. It’s all grist for the mill of anal Youtubers such as the one whose half-hour video I took in. It’s eye-candy. Easter Eggs are supposed to be one-off, hard to find little secrets, but when everything is an Easter Egg, it isn’t long before you get chocolate poisoning.

Of course there is the unoriginality of the premise itself, which as stated in the extra features, is a digital re-imagining of Charlie and the Chocolate Factory, with Wade looking for the Golden Tickets that will earn him Willy Wonka’s secrets. But then you have Wade’s relationship with Halliday/Anorak, which given that the latter is deceased, makes it even more like the relationship between David Lightman and Falken in Wargames, as Wade tries to decipher the clues to the prize. On the other hand Sorrento is a character who is just like Ed Dillinger in TRON, an executive who’s risen to power off the hard work of other, more talented people, and whose lust for even more power makes him the villain of the piece.

I am an eighties kid, and far from the love letter I’ve heard Ready Player One to be, I just don’t think that this film is really aimed at me. It’s so jam-packed, crammed with nostalgia that it all blends into one digital snapshot of lip-service. If you really want eighties nostalgia done right, Donnie Darko is a better bet. Ready Player One is a movie better suited to millennials. It’s one big lump of everything that your parents loved, now go forth and discover, my children... but no, you can’t borrow my Big Trouble in Little China Blu-ray.

Spielberg still can make a rousing action adventure movie, and he cuts to what’s most important about the story, the characters, and the message. And if you take Ready Player One at face value, perversely not allow yourself to be distracted by the eighties explosion, you’ll enjoy this film a lot more. If you want to try a different mish-mash of eighties pop-culture in a Steven Spielberg production, there’s an episode of his TV series, Amazing Stories called Remote Control Man worth checking out.