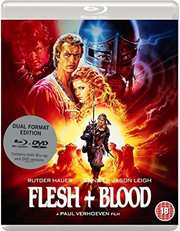 Review for Flesh and Blood

Set in 1501 Western Europe, Flesh and Blood tells the story of an army of mercenaries led by Martin who help Arnolfini take back a castle, only for him to betray them. In revenge they attack his carriage and in the process kidnap Agnes who is betrothed to Arnolfini's son Steven. This leads to Steven taking out his revenge to make sure that the band of savages are destroyed for good.

I so wanted to enjoy this film. I really did. I saw that Paul Verhoeven directed it. I loved Robocop, Total Recall and even some of his campier works like Starship Troopers and Showgirls. I saw that it was considered a cult classic and I saw that it starred Rutger Hauer. I mean this should have been a slam dunk. However, this is possibly the most disappointing, nonsensical films I have seen in a very long time. The above brief synopsis of the film really doesn't do this film justice. I should sum it up thus:

I don't know who this film was aimed at. The Krull fan in wanted to love the sword and swashbuckling nature of it, yet the film is just tonally wrong throughout. The central rape scene (one of many) is just uncomfortable to watch and I understand that this is the point, however that doesn't mean it is entertaining.

The film looks amazing from a set and costume point of view, but it's just a shame that this looks like a VHS copy that has been recopied a few times. I understand that films can't all be 4K quality, but there could at least be a warning. I originally thought it was my machine or TV, so I tried it on another, but no the grainy quality is still there and made even more noticeable by the clear quality of the extras.

The acting was so pitiful that at times I wanted it to turn into a spoof just so some of the hammy performances could be justified. If they had gone in the vein of Mel Brooks or Monty Python it may have been better. At times, I didn't know if I was supposed to laugh or be shocked and instead I chose neither. It wasn't a nice experience and not one I would recommend.

The set is filled with extras which I both loved and hated. As I have said numerous times, there is nothing worse than having to sit through a host of extras for a film you did not care for. Thankfully this is a mix of extras looking at the film and also looking specifically at Verhoeven himself.

Verhoeven Versus Verhoeven is a French Documentary looking at his entire career and despite having to watch with English Subtitles, it is a great look at his career and if you only know him from things like Robocop or Showgirls then this is a great way to see just how varied his career has been.

Paul Verhoeven in the Flesh is an interview with him about the film itself. This is fine in general, but I do feel that this needed someone asking questions otherwise this is really just him rambling for twenty minutes about the film. Though he does has some interesting stories about the creation of the movie itself. This is also shown in his Commentary which is probably more enjoyable than the film itself. It is quite clear that he enjoyed making the film and had lots of stories to tell about it. However, like the interview it would have been better with someone else for him to back and forth stories and thoughts with. It is a shame that he and Rutger Hauer never buried the hatchet as this would have been interesting to have heard them talk about the issues they had making the film.

Hauer does contribute an audio interview which could have been interesting, but it starts with him talking about The Hitcher? It would have been good if there was some context given to when the interview was and why. If you are a fan of the actor then you may find what he says interesting. I found it quite boring if I am honest and difficult to sit through with only one screenshot that does not change.

There is an interview with co-writer Gerard Soeteman which was interesting. It is surprising they did not ask him to join the Commentary or to contribute one as he clearly had lots to say about the film itself. As does Basil Poledouris, who composed the amazing (and one of the few highlights of the film) score to the film. He went on to create the music for Verhoeven's Robocop and Starship Troopers and his music is amazing.

Finally, we have the Trailer which more or less confirmed my thoughts about the quality of this transfer. It looked exactly like the transfer of the main film and is nearly three minutes of just action, violence and boobs, with no dialogue to explain what is going on: which could almost describe the film itself.

Flesh and Blood could have been a great film to sit alongside the likes of Conan The Barbarian or Krull. Instead, it is a rather campy, atonal film that does not work in any way. If you are a fan of Verhoeven, you may be interested in what he did before Robocop, but believe me, you will be wanting to watch Showgirls by the end.