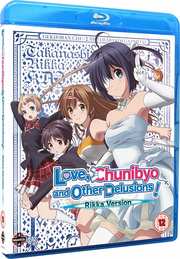 Review for Love, Chunibyo and Other Delusions! The Movie: Rikka Version

I’m currently on something of a Battlestar kick, and the refrain, “All of this has happened before, and all of this will happen again” is never far from my mind. This brings us to Kyoto Animation and their feature film adaptations of popular TV series. Last autumn I had the pleasure of reviewing the Beyond the Boundary feature film, which in that case was actually two films on one disc. Kyoto Animation had first made a compilation movie that condensed the events of the series into some 80 minutes, and then animated a feature film continuation to the story. And now we come to Love, Chunibyo and Other Delusions, an even more popular show (it got a second series), and once again, KyoAni have made two films, a compilation movie of the first series, and a feature film continuation, Take On Me. It’s a sign of this show’s popularity that instead of a two-fer, we get the compilation movie now, while Manga will release Take on Me towards the end of the year.

Yuta Togashi was a typical Chunibyo in middle school. He was under the impression that he was the Dark Flame Master, blessed with supernatural powers, and destined to have a more meaningful existence than anyone else. He dressed up, wore a bandage on his right hand to ‘seal’ his powers, bought all sorts of paraphernalia, culminating in the sort of unfeasibly large sword manga heroes wield, and was ignored by his classmates, and humorously tolerated by his family. That phase quickly wore off, although remembering the dork he used to be tends to send him into paroxysms of extreme embarrassment, wishing a painful death to his younger self. Now he’s starting high school, putting all that nonsense behind him, and he’s even chosen a high school far enough away that no one could possible know him, know who he was a few years previously. The night before high school starts, a girl in an eye-patch wearing a loli-goth outfit climbs down a rope from the apartment above, and offers to show him... No... he’s striving for a normal life... 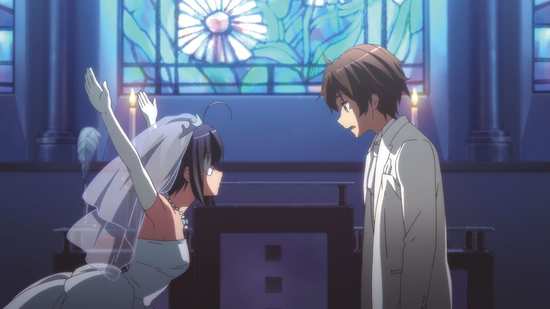 The next day on the way to school he literally bumps into the eye-patch girl, Rikka Takanashi at the railway station, and when the train pulls in, she uses her ‘telekinetic’ powers to ‘force’ open the train’s automatic doors so she can get on, a performance that shocks Yuta so much that he misses the train altogether. The eye-patch conceals the Wicked Lord Shingan (a colour contact lens), supreme powers, and she wants to make a pact with the Dark Flame Master. She knows who Yuta used to be, and she isn’t above using a little blackmail to enlist his help. Which is how they start the Far-East Magical Society as an after-school club. So Yuta winds up supporting Rikka’s lingering delusions, all the while trying to keep his past self a secret, but slowly learns that there’s more to this eye-patch wearing self-styled ultimate force of darkness than meets the eye. There’s a cute girl with a tragic past...

One day in the club, the girls get to talking, and Dekomori and Kumin ask Rikka how she and Yuta hooked up. She begins to relate the story...

Love, Chunibyo and Other Delusions – Rikka Version gets a 1.78:1 widescreen 1080p transfer. What we have here is a really nice presentation of the film, clear and sharp throughout, with strong, bold colours, and bringing across the animation as smoothly and as faithfully as you can hope for. Chunibyo is a Kyoto Animation series, and that comes across in the style of the animation, and the bright and slightly hazy, softened look to the piece. The character designs are very distinctive, and come across with consistency, staying on model throughout. The film consists mostly of footage recycled from the TV series, but is bookended by original material, but it all looks of a piece.

The images used in this review have been kindly supplied by Manga Entertainment. 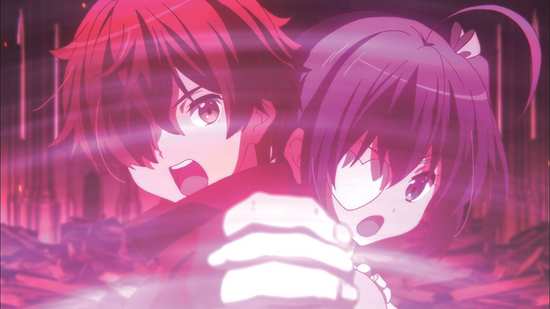 You have the choice between DTS-HD MA 5.1 Surround English and Japanese, with subtitles and signs locked during playback. I went with the Japanese, and while working from the same source as the TV show, the surround mix certainly helped bring the delusional action sequences to life. The Japanese cast is the same and it is very much my preferred way of watching the film. The film does get a new orchestral score to accompany the re-edited television sequences, as cutting and pasting the original music would have been a mess. The subtitles are timed accurately and are free of typos.

The disc boots to a static menu and the film is followed by a translated English credit reel.

You get the textless credits for the film, and 2:53 of Japanese Previews.

Love, Chunibyo and Other Delusions Lite: “My Brother 2” is another bit of fun (and a sequel to a Lite short on the first season collection). It’s another tale from Kuzuha’s point of view from when her brother Yuta was a weirdo. This last 6:55.

You can get a good look at chibi Rikka carnival dancing in the textless credits for the latter.

Finally there are trailer for Girls und Panzer der Film, Tamako –love story–, Wake Up, Girls! The Movie, and Beyond the Boundary –I’ll Be Here–. 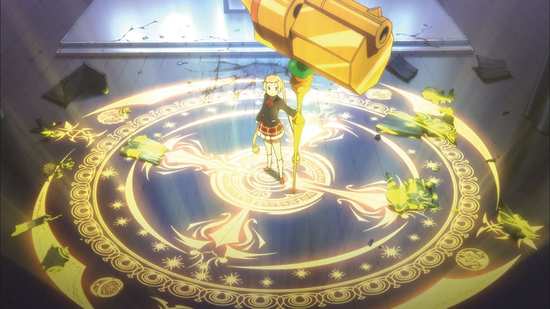 How can you take a great TV series, and turn it into something utterly forgettable, boring even? The answer of course is the compilation movie... You know how tight margins are for the average UK anime company? So here’s what you do if you’re a Chunibyo fan. You buy this film, put it to one side, and re-watch the TV series instead. Because you want to be absolutely certain that Take on Me gets its UK release. Just like the Beyond the Boundary films, the continuation is the movie that is worth getting.

This Rikka Version of the first season really is just a highlights package, albeit bookended by a fan-baiting wedding sequence at the head of the film, and a lead in to season 2 at the end. Given that the story is in effect Rikka telling Kumin and Dekomori how she and Yuta first met, and how their relationship developed, you can guess that the film strips out everything that isn’t concentrated on the pairing. Given how some of the supporting characters and their plot arcs also tied into Yuta and Rikka, it is a pretty anorexic boy meets girl tale in the end, and none of the emotional beats in the retelling have the weight to make them feel poignant. The character development for Kumin, Dekomori and Nibutani winds up as fast paced, randomly edited character montage in the middle of the film, incoherent in every way other than to serve as a reminder of the TV series. Poor Isshiki gets cut out altogether. 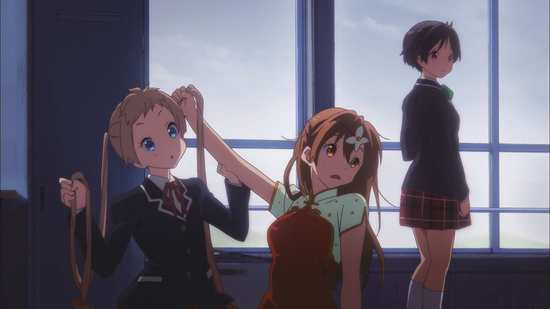 Then there is the almighty plot hole. In the TV series, we’d get multiple viewpoints, with Rikka’s view of the world all filtered through magical powers, ultimate weapons and special moves, counterpointed by the mundanity of the real world. A no holds barred magical battle with ultimate weapons and big explosions in Rikka’s world, ends with a ladle to the head from her older sister Toka in the real world. Now in the film, Rikka’s telling the story. Surely it should all be from her viewpoint, the pact that formed between The Wicked Lord Shingan and the Dark Flame Master, not the faltering first steps to love between Rikka and Yuta. Of course that would mean animating the whole thing again, setting it in a fantasy world; and this would defeat the point of the compilation movie. So while Rikka tells the tale, most of it is taken from Yuta’s point of view, which is enough to make a pedant weep.

Having said all of that, the compilation movie does work. It tells its story over its 90 minute runtime, and it gives you an insight into the two central characters. Most of the good stuff from the series has to hit the cutting room floor to make it work though, and the other characters are hard done by. When it comes down to it, any emotional reaction I had to the film was through the prism of the television series. If I was moved by a scene in the film it was because I was recalling context which isn’t in the film. The short animation in the extras is five minutes of fun though. This is about as self-serving a review as you’ll ever get. Buy Love, Chunibyo and Other Delusions – Rikka Version to ensure that we get Love, Chunibyo and Other Delusions – Take on Me.