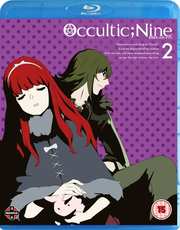 The temperature is topping 30 degrees by day, and not dropping that much by night either. There is a World Cup tournament on TV, and I’ve just re-written what was previously a rather optimistic introduction. I’m just saying that I’m not overly motivated to watch anime right now. I’d rather melt, not that I have any choice in the matter. But then Occultic;Nine’s second half shows up for review. It’s that show with the character with the ridiculously over-sized breasts. It’s also the show that delivered a knock-out blow with its mid-season cliff-hanger, the kind of plot twist that leaves jaws hanging, leaves you desperate to see how it pans out. And now’s my chance... just as it turns out that football still isn’t coming home... Yeah, I’m not going to get this review written, am I? 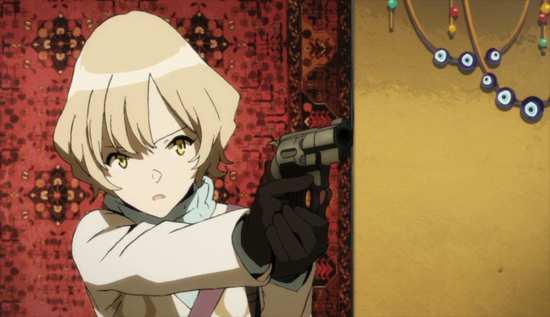 Yuta Gamon is a high school student who with the help of his friend Ryoka Narusawa runs a blog on the occult, Kiri Kiri Basara. Occultic;Nine follows nine characters linked to this blog, and the events that occur surrounding the mysterious death of a famous professor of the paranormal named Hashigami. But the investigation gets really personal following the discovery of a mass suicide. 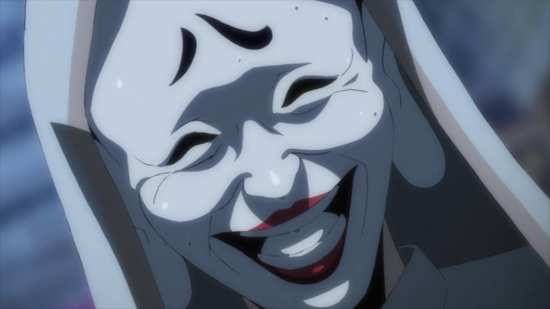 You get the concluding six episodes of Occultic;Nine from Manga Entertainment spread across two single layer Blu-ray discs.

Disc 2
10. Another Girl, Another Planet
11. We Want the Airwaves
12. We’re Gonna Have a Real Good Time Together 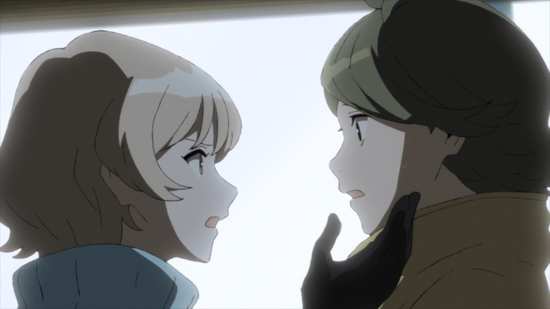 Occultic;Nine gets a 1.78:1 widescreen 1080p transfer. The image is clear and sharp, and with six episodes spread across two discs, you’re not going to have any worries about compression, aliasing or even digital banding. Colours are strong and consistent, and detail levels are excellent. While the character designs are rather typical of anime, there is a sketch style to the line art that gives Occultic;Nine a rather unfinished, unique look that is really appealing, while the quality of the animation is rich and fluid. It’s a fine looking show, apart from Ryoka’s fan servicey, oversized breasts, which are such a sop to the otaku that they’re actually a comic distraction. 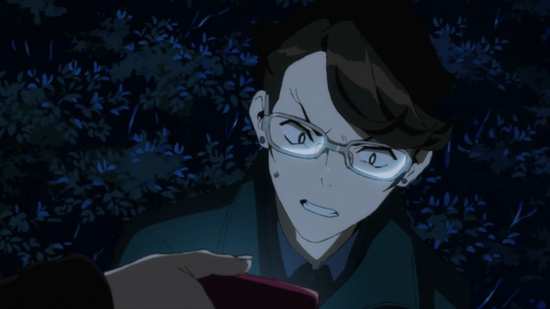 You have the choice between PCM 2.0 Stereo English and Japanese with optional translated subtitles and a signs only track. The stereo is perfectly suited to bringing across the drama and comedy of the show, and the fast paced dialogue is clear and audible throughout. The subtitles keep up well, while remaining legible and they are free of typos. If there is an issue, it’s one of subtitle placement, with the captions alternating between the top and bottom of the screen, seemingly at random. I gave the dub a quick try and it sounded pretty good to me, a strong alternative if you get tired of reading at breakneck speed. 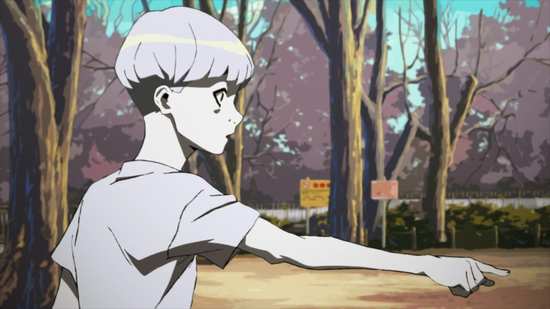 The discs present their content with silent animated menus. The extras on disc one comprise the textless credits, and a 1:59 trailer for the show.

Remember not to skip the end credits, as sometimes there is a post-credits scene that gets missed out that way. 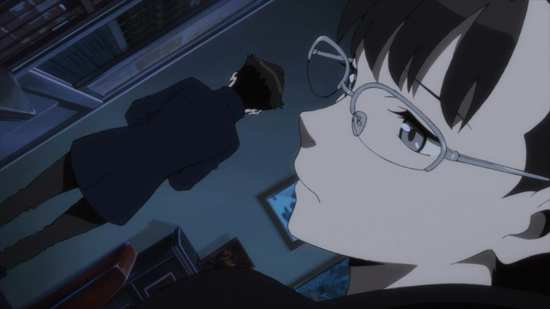 That big, jaw-dropping twist at the midpoint of the show turned out to be the high-point of Occultic;Nine in the end. It’s all downhill from that, although thankfully for Part 2, it’s more of a gentle incline than a full scale plummet. The twist is actually an anomaly in the story, a big moment that makes you sit up and take notice, gets you hooked into an otherwise impenetrable tale. The rest of the Occultic;Nine suffers from all of the same problems as the first half, unlikable characters, a mile a minute impenetrable dialogue, and a slapdash layering of concepts and ideas that barely hang together, and none of which are developed to any narrative satisfaction. It all becomes so much babble and exposition in the end. And then episode 10 consists entirely of Dutch angles, because it can. An entire episode is stylistically different from all the rest for no apparent reason. 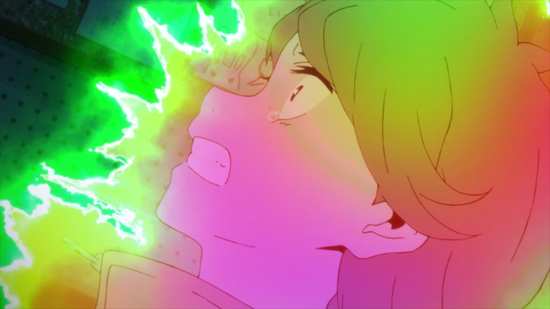 Ryoka Narusawa’s gargantuan breasts continue to distract, and the pages and pages of dialogue have to be spoken so quickly simply to fit into the episode runtime, that I doubt very much that the actors have any space to actually, well... act. In particular the voice actor for the antagonist, Takasu really does sound as if he’s just reading from a page, as quickly as he can. With a show as dense in exposition as Occultic;Nine the viewer has to be motivated to stay in touch, the story has to be really good, and it just isn’t good enough here. This isn’t a Bakemonogatari or Tatami Galaxy, where the characters are intriguing enough for you to make the effort. 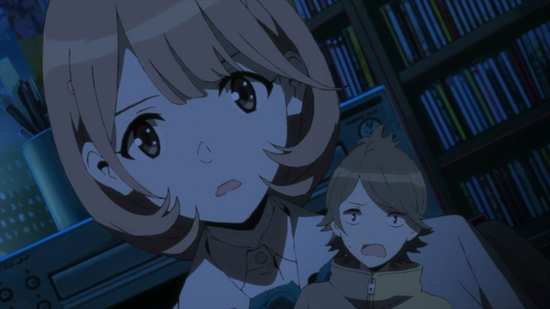 In true Science Adventure style Occultic;Nine gets pretty esoteric with its plot. Steins;Gate, Robotics;Notes, and Chaos;Head all got far out with their concepts, and in Occultic;Nine’s case, the central conspiracy is based on a scientific definition of the afterlife, through radio waves, and an obscure rare-earth element. It all boils down to a search for eternal life, and world domination, and the nine characters driving this story have become caught up in a dry run. The latter half of the series follows them as they try to uncover the mystery. It gets convoluted and it ought to be compelling given that mid-season twist, but you’ll have to take my word for it that it never quite captures the imagination in the way that it should. The characters serve to distract from the story rather than drive its development, although to elaborate would mean discussing that plot twist, and I really don’t want to spoil what is best about Occultic;Nine. 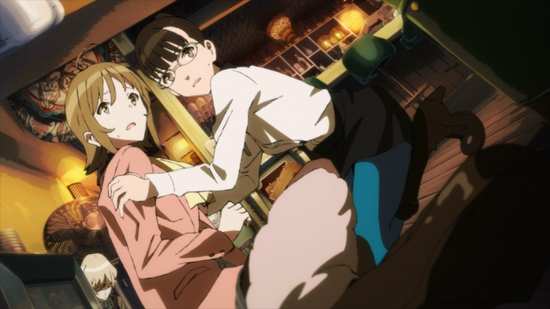 Occultic;Nine does what it sets out to, and tells an interesting story. However, unlikeable characters and pacing issues (this is a twelve episode series that should have been twice as long) make what could have been a great show feel rather ephemeral and ultimately disposable. Occultic;Nine just doesn’t have the staying power that Steins;Gate had.