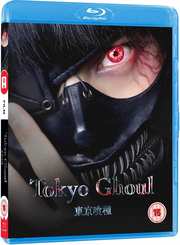 All the Anime + A Little Bit of Live Action doesn’t really zing as a label name, and it won’t fit on the spine of a DVD case, but All the Anime are indeed delving into the world of live action movies. It’s all because of love of course. Sometimes a label will fall in love with a franchise, and certainly All the Anime have championed the cause of Tokyo Ghoul to this point, releasing the original series and the follow-up, as well as the Jack & Pinto OVAs. With another series of anime coming up, it only makes sense that All the Anime would release the live action feature film as well. There is also the love (some would say obsession) that fans can have for a product, and the desire to have the ‘whole thing’ in one’s collection. Anime fans are nothing if not obsessive, and companies like All the Anime and Manga Entertainment certainly recognise that. So here then is All the Anime’s first (to my knowledge) live action release.

Kaneki Ken is a pretty normal university student, enjoys literature, has a close friend in Hide, and a healthy appreciation for girls or at least one girl in particular, Rize. Hide tells him that she’s out of his league, but a mutual like of a certain author is enough to snag him a date. It’s all well and good, but Kaneki lives in a Tokyo where humans have to co-exist with ghouls. Ghouls are supernaturally strong beings who subsist on human flesh, which makes Tokyo something of a happy hunting ground. As luck would have it, Rize is a ghoul who’s actually looking on Kaneki as her next meal. She begins to feast, taking a bite out of Kaneki’s shoulder, but a girder collapse puts Kaneki in hospital, fighting for his life. The doctors have no option but to perform a transplant from the dead girl who was brought in with Kaneki...

When Kaneki comes around, he finds that he’s lost his appetite for human food; it makes him throw up. On the other hand, humans smell... appetising. He’s become a half-ghoul, taken on their invulnerabilities, and some special powers, but he can only eat human flesh. That isn’t going to happen, and the self-loathing and despair drives him into seclusion. But then there is the cafe, Anteiku, which turns out to be a ghoul gathering place in Tokyo’s 20th Ward. It’s where Kaneki learns the other side of the coin, that not all ghouls are monsters, most ghouls are just people who want to coexist with humans, and Anteiku’s manager helps Kaneki find his place in this new world. He also has some dubious help from Anteiku’s harsh waitress Touka. But there is the CCG organisation tasked with hunting down the monsters, and cleansing Tokyo of the ghoul menace, even if they’re just trying to fit in. But a half-ghoul half human might just be the bridge that the two sides need.

All the Anime are repurposing Funimation’s release for the UK, the transfer is identical. You have a 2.35:1 widescreen 1080p transfer on this disc, which is pretty dismal to be honest. It looks as if Funimation have pulled their usual nonsense with gamma levels, and it makes a far bigger difference with live action than it does to anime. Brightness is such that darker scenes are all washed out, blacks tend to grey, and contrast and dark detail is lacking to the point of non-existence in some scenes. Brighter scenes, daylight scenes look good, with strong detail, but given the nature of the story, most of it happens at night. I ought to have a really big whinge about this practice of altering brightness, but in this case, it has the unexpected benefit of obscuring the p***-poor CGI. The kagune and quinque look laughable in this film, wholly unreal.

The images in this review were sourced from the DVD and aren’t representative of the Blu-ray.

You have the choice between Dolby TrueHD 5.1 Surround English and Japanese with subtitles and signs locked during playback. It’s a live action movie so I’m never going to try the dub. Otherwise the dialogue is clear, and the surround comes to life for the music and the action. Speaking of music, you’ll be having Matrix flashbacks, as the film shares a composer in Don Davis. The subtitles are accurately timed but have at least one typo that I noticed.

The disc autoplays a trailer for Attack on Titan live action before booting to an animated menu. There is a translated English credit reel after the film ends.

Anime Expo 2017: Cast and Crew Discuss Tokyo Ghoul: The Movie lasts 7:08, and the lead actor, the producer and the director speak.

You get the original Japanese trailer for the film, and further Funimation trailers for Tokyo Ghoul √A, and the live action movies Black Butler, and the three Rurouni Kenshin movies.

As good as the Tokyo Ghoul series was, the live action movie aims for new depths of bad. It’s probably the worst live action adaptation of a manga/anime I have seen in quite some time. No, I tell a lie, it’s the second worst given the Black Butler movie, which is in a separate dimension of awfulness. There are plenty of reasons for me to dislike Tokyo Ghoul, not least of which is Funimation’s disc authoring which renders a mostly night set film difficult to discern. But this movie’s biggest problem is the lead actor.

Kaneki Ken should be a sympathetic character first and foremost. He’s the audience’s eyes into this weird world of humans and ghouls co-existing, and we need to share his horror at the transformation that comes over him, his gradual discovery that the ghoul world isn’t always horrific, and his growing empathy for the ghouls that he meets. You certainly get that feeling in the anime which gets the characterisation spot on. In this film, he has the disposition of a nervous weasel, utterly unlikeable, and when he gets into ghoul mode, he does this weird thing with his tongue which is only possible with Gene Simmons as his stunt double or some serious CGI. He’s supposed to normalise, humanise a creepy world, but for that to work, the character has to feel human to begin with. Speaking of poor characterisations, Mado of the CCG who in the anime was a quirky and unsettling character, is just another shouty villain in this film, albeit with a white fright wig.

It’s an all too common choice these days, ever since CGI became affordable, for filmmakers to take the extravagant and effects heavy manga stories, and adapt them to film, but they never have the budget to make the films feel real, overloaded with CGI, and shorn of character and story. The Tokyo Ghoul feature film strips all but Kaneki’s transformation, mother and daughter Ryoko and Hinami’s story, and the hunt by the CCG detectives, Amon and Mado. Even the Nishio and Hide storyline is just half-finished. The film will also opt for the spectacle over character development and narrative, so I never felt satisfied with how the story panned out. There just wasn’t enough flesh on the bone.

The biggest waste is with the story, which in essence merely retells that which you’ll already have read in the manga, and seen in the anime. There is nothing new here. For all their sins (and there are plenty of them), the Attack on Titan and Black Butler movies did something new with their characters and stories, in both cases altering the setting of their respective tales. The Tokyo Ghoul live action movie might have held my interest if it had done something different, something unique.

I know how it is. I’m a collector, and I’ve been a fan. I own Star Trek Nemesis, Galactica 80, Robocop 3, and I know how that ‘got to have ‘em all’ gene works. I suspect that the Tokyo Ghoul live action movie will be in a lot of Tokyo Ghoul collections, and I’m willing to bet that it’ll be watched least of all.