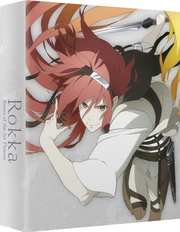 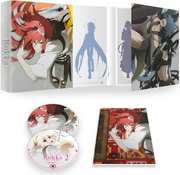 Review for Rokka - Braves of the Six Flowers Collector's Edition

The swords and sorcery fantasy genre has never been my first pick when it comes to anime to watch. That’s despite it offering a variety of stories from Slayers to Berserk. And that’s before we even get to the ‘lost in another world’ genre of anime. I’ve always gravitated towards the sci-fi part of sci-fi and fantasy, spaceships, cyborgs and time machines more fascinating than wizards, dragons and orcs. But a reviewer has to review what’s in front of them, and I can always hope that we’ll get another Rage of Bahamut: Genesis, and not a Lord Marksman and Vanadis. Honestly, I’ll be happy with another Snow White with the Red Hair. You’ll note that the latter three titles have all been released in the UK by All the Anime. They’re having another go now with Rokka: Braves of the Six Flowers on Collector’s Edition Blu-ray and standard DVD. Note that this was a three volume release in the US in 2015, subtitle only from Pony Canyon, at Pony Canyon prices. All the Anime are releasing the complete series now, and the English dub makes its home video debut here! 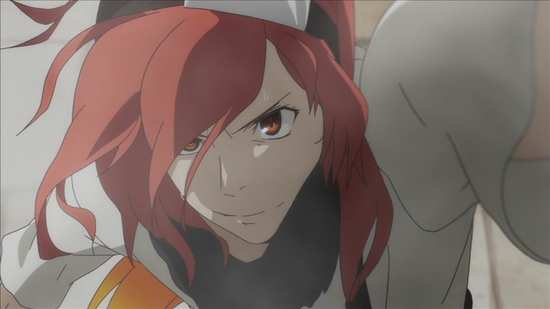 The legend of the demons states that when the Evil God awakens, the Goddess of Fate will select six heroes to defeat the demons and fiends that will rise. These heroes are known as the Braves of the Six Flowers. Adlet Myer knows that he’ll be one of the chosen; after all, he is the strongest man in the world. He gatecrashes a holy tournament to make his presence known to Princess Nachetanya, who is meant to fight the winner of the tournament, the victor sure to be one of the chosen. But then the sky turns red, and the fiends attack, and the mark of the six flowers appears on Adlet’s hand, and on Nachetanya as well. 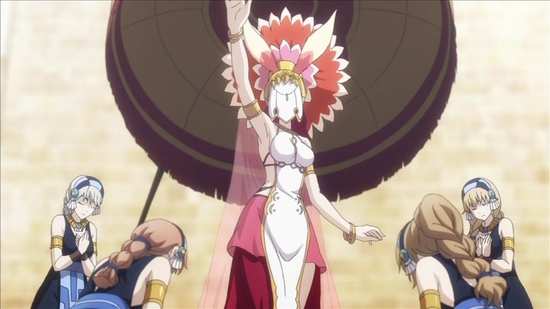 The time of the Evil God has come again, and it’s time for the Braves to gather, and fulfil their destiny. Only when they do finally meet, there are seven of them. One of them is a false Brave, a spy for the Evil God, and suspicion falls on Adlet Myer.

Twelve episodes of Rokka: Braves of the Six Flowers are presented across two Blu-rays from All the Anime. 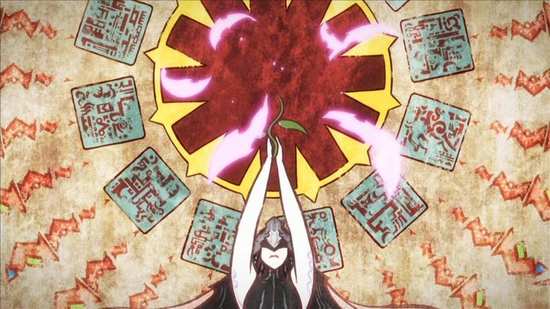 Disc 1
1. The Strongest Man in the World
2. First Journey
3. The Girl Who Kills Braves
4. The Heroes Gather
5. The Seventh Brave
6. A Trap and a Rout

Disc 2
7. The Reasons of the Two
8. The Average Man and the Genius
9. Blossoms of Doubt
10. Desperate Situation
11. Counterattack
12. The Time to Reveal the Answer 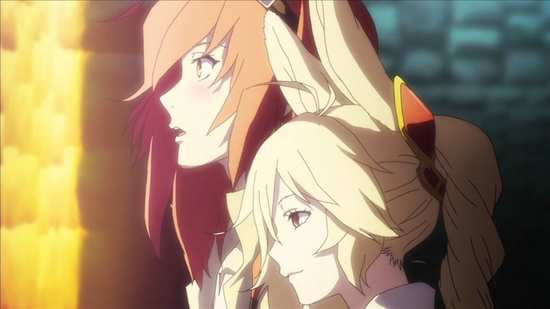 Rokka gets a 1.78:1 widescreen 1080p transfer on these discs, and it’s par for the course for an anime presentation. The image is clear and sharp, the colours are strong and consistent, and the animation is smooth. There is no visible compression or aliasing, and there might just be the slightest hint of digital banding, but not enough to impact on the viewing experience. The animation is of strong quality, an epic and grand fantasy world, brought to life with impressive visuals and effects. The character designs may be a little generic and unmemorable at times, but the effort put into the action sequences really does tell in the final animation.

The images in this review were taken from the DVD version, and aren’t representative of the Blu-ray. 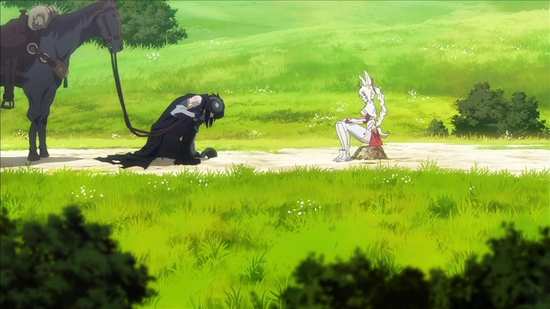 You have the choice between DTS-HD MA 2.0 Stereo English, French, and Japanese, the latter with English or French subtitles, the other two with signs, all locked during playback. The subtitles are in that thin white font that can get lost against busy backgrounds. They are timed accurately and free of typos, although there are no subtitles for the theme songs. The dialogue is clear, and the Japanese cast is suited well to their roles. The action comes across well even through the stereo soundstage, and the orchestral score for the show impresses. I gave the English dub a quick try and it didn’t endear itself to me in the few minutes that I sampled. 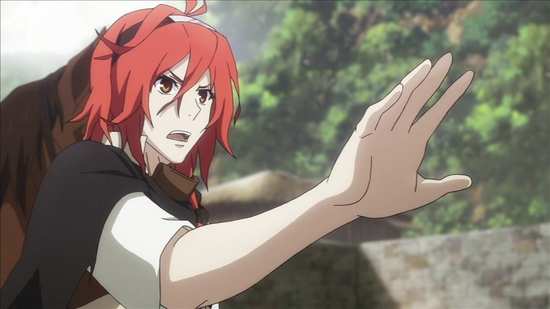 Disc 1 has 4 Japanese trailers and 2 English trailers for the show.

Disc 2 has the textless credits, 2 openings and 3 closings.

I haven’t seen the physical extras or the packaging to comment. 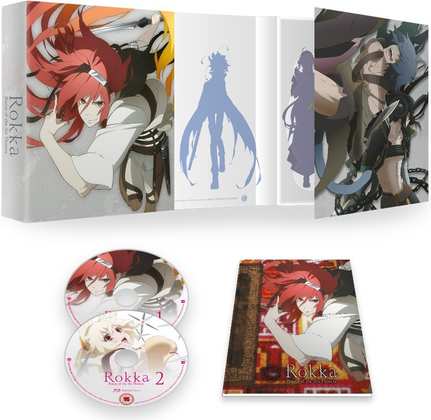 I was completely blindsided by Rokka: Braves of the Six Flowers, but thankfully it was in a good way. There are so many fantasy stories and shows out there that it’s easy to get jaded, find the experience stale and repetitive. Rokka shows that the trick is to take the fantasy setting but tell a different genre of story within that setting. As a result, the story becomes fresh and original again. 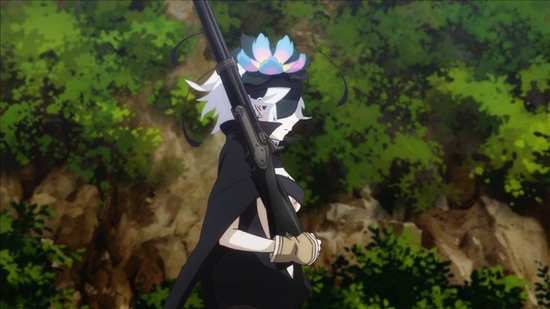 It seems so stereotypical at first, a premise about demons rising on a regular basis in this world, and heroes rising to the challenge, selected by divine blessing, time and again to defeat the lord of all of the demons, making the world safe once more, until the next time. You’d expect this blessing to fall on the strongest, and so it is that we meet our protagonist, Adlet Myer, to all intents and purposes an average man, but one who has trained himself up to be strong, where most other Braves are also Saints, possessors of magical abilities. Adlet Myer announces himself with pride, struts and preens with no apparent justification, and begins by crashing a Holy Tournament designed to select the next Brave, only to be arrested for his trouble. 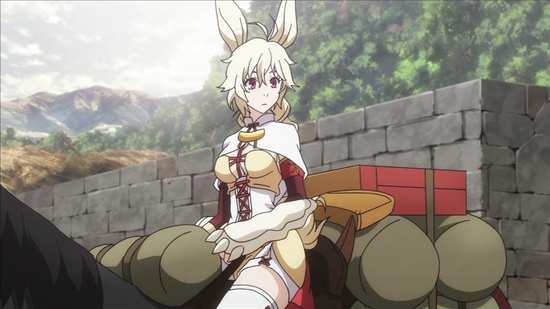 But then the demons do return, and with it the signs of selection appear on those intended to be Braves, and languishing in his prison cell, the seal appears on Adlet Myer as well. The princess of the realm, Nachetanya (a Sword Saint has also been selected, so it becomes incumbent on the two of them to head to the rendezvous, where all six Braves are meant to gather. 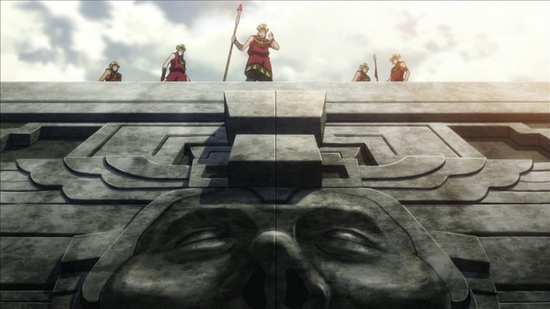 On the way they run into Nachetanya’s Captain of the Guard, Goldov, and more interestingly Flamie Speeddraw (a Gunpowder Saint), who has been hunted as a Brave-Killer, someone who’s suspected of hunting down and killing potential Braves before they can be selected. Yet she has been selected in turn. Nachetanya and Goldov attack her as a criminal, but Adlet is alone in trusting her. Not even Flamie is happy with that, but the four continue on to the rendezvous where they meet not just two, but three more Braves, Maura Chester, a priestess, an assassin named Hans Humpty, and a young girl with an obnoxious disposition and a noxious ability named Chamot Rosso. 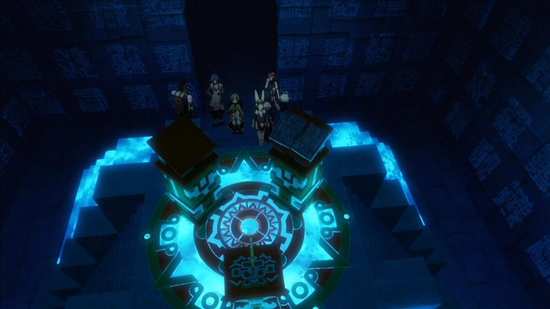 Seven Braves where there should have been six, and what began as a fantasy adventure, a battle between good versus evil, becomes something completely different, a mystery, as it is quickly realised that one of the seven must be a fake. It becomes imperative to get to the bottom of the mystery, when a barrier inside the temple is activated, and the seven are confined to the surrounding jungle, along with several Fiends. You might expect suspicion to fall on Flamie, after all she was being hunted as a criminal, but Adlet’s trust in her conversely makes him the suspicious character, especially as he was the first to the temple when the barrier activated. When it becomes clear that killing the fake will likely lower the barrier, then proving his innocence becomes a matter of life and death, especially when no one believes his protestations of innocence. 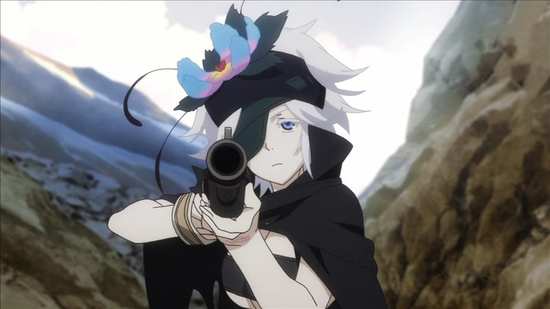 I was zoning out during the first few episodes, but once Rokka changed tack, it really did hold my attention. The animation is of high quality, and it sounds great too. But where it really excels is in the writing. Finding out just who among them is the imposter, means an examination of character, which makes for really engaging storytelling. Rokka also keeps its cards close to its chest for the duration, you’ll be just as uncertain as the characters as to who the villain is, and your suspicions will no doubt shift repeatedly during the show. I have to admit that I even had my doubts about Adlet Myer at one point, and he’s the protagonist of the story. It’s really well written in that respect. 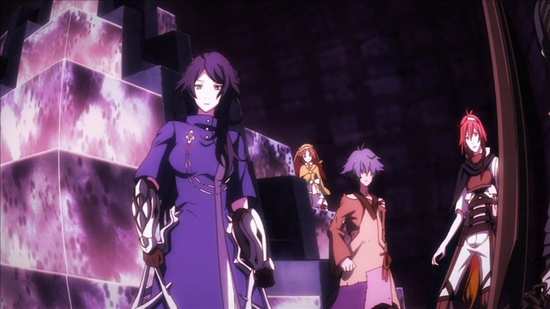 Given that the mystery is the whole point to the show, it doesn’t really matter that you don’t see the showdown between the Braves and the Evil God, but the show does leave on an open-ended note just in case there was a clamour for more. But not to worry as it also does it in a way that serves as a delightful punchline to the story, a great, memorable gag on which to close out on. If there is a weakness to Rokka, it’s the familiar character archetypes popping up yet again; the quiet grey-haired girl, the perky bunny girl, the ‘cat’ character sticking ‘Nyah’ into every utterance, the bratty child... The current fashion for character tropes in anime has lasted well over ten years now, and it’s becoming less cliché than it is laziness on the part of the creators. I’m beginning to think that anime needs a revolution in writing. 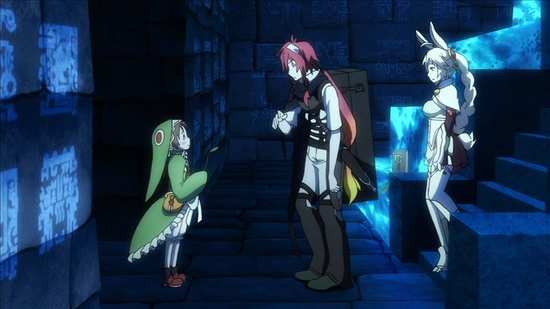 In the case of Rokka: Braves of the Six Flowers, it’s less a problem than it is an observation, as the characters here are more than just surface. It’s their depths and complexities that drive the story and make it work, so the surface is easy to forgive. Solid Blu-ray presentation of a quality fantasy show makes Rokka: Braves of the Six Flowers well worth seeking out.