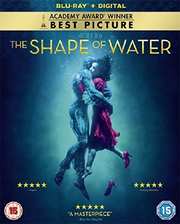 The Shape of Water (Blu-ray Details)

Review for The Shape of Water

The Shape of Water is an extraordinary film and one that I simply cannot believe got made. However, if anyone was ever to make a film like this then you know it would be Director Guillermo del Toro. His work in the past has been extraordinary with the likes of Pan's Labyrinth one of the most visually stunning films I have ever seen. Here he winds all of this up in one of the most beautiful, yet oddly unconventional love stories I have ever witnessed.

Elisa is a mute, works with the over-friendly Zelda and spends the rest of her time with her neighbour Giles, who is struggling artists and closet homosexual. Elisa and Zelda work cleaning in a high-security government facility where Elisa's entire life is turned upside down when she discovers a secret experiment. Ran by the sinister Strickland, he is in charge of studying the 'asset'.

Now, it is at this point where I would usually issue a spoiler alert before I explain the rest of the plot, but what's the point? Just look at the cover and it will tell you everything about what this film is about. There is no reason to not reveal that the 'asset' is some strange amphibian-like creature or that it starts a relationship with Elisa. A relationship which is doomed from the very beginning with Strickland trying everything he can to make sure that it does not get into the wrong hands.

Where do I start?

First up. This film is technically stunning. The production designers deserve the Oscar won for what they did to make this film look so good. It is surprising that it did not sweep up any of the other technical awards it was nominated for as it looks amazing. The score by Alexandre Desplat is also amazing and adds much to the films' style and feel. What del Toro was able to create showed just why he is referred to a 'Visionary Director' and I was blown away by what he was able to achieve on the screen and again well deserving his Best Director Oscar for the look and feel of the film.

Now, that I have got that over with I will have to say something I wish I didn't.
This film is awful. I mean as a film, as a story, the film is an absolute mess from start to finish and I am so disappointed. I watched begging for this film to be great. I wanted to come away thinking that it deserved that Oscar for Best Picture. However, this film robbed Three Billboards of its rightful win and I am stunned by what people saw in this film. Yes, as I say, it is a beautiful film and just on looks and sound alone it deserves its praise, but that is not good enough for what is quite frankly a very generic, bland and at times confusing film.

It is a film that wants me to believe that if someone discovered a sea-creature that they would just accept it, without question. The bond between the creature and Elisa is so quick that you get whiplash from it. There is not a moment when she is terrified of the creature which most people would run screaming from (yes she is a mute, but that's not the point) and instead within a few scenes is involved in some bizarre sexual relationship with it whose only purpose is to show actress Sally Hawkins naked as many times as possible.

Halfway through the film, Spielberg's Bridge of Spies jumps into the film and it becomes a Soviet spy film that makes no sense. Even the always wonderful Michael Shannon cannot save the film from descending into cliché. I was shocked by the end at how pointless the whole film was and this was such a shame as I wanted to like it so much.

Instead, I found myself watching this film feeling a little listless, bored and wanting it to end. The whole ambiance, look and feel of the film could not save it and in a way it made me even more depressed that all these wonderful talents wasted their time on this mess of a film. I read a number of reviews to see if there was something I missed and all I read was constant talk about how great the film looked and how wonderful Hawkins was. This is true, she is fantastic and her use of sign language and performance is amazing and well deserving of her nomination, but it is such a shame her character couldn't have been in a better film.

Extras include a half hour making of documentary A Fairy Tale for Troubled Times, There are two 'Anatomy of the Scene' extras for The Prologue and The Dance and they both look at how the scenes were created showing storyboards and other editing techniques. I wish this had been a split-screen or different angle extra so that we could watch the scene fully through all these ways as it would have been better to show how much work and effort went into the pre-production and the production of these scenes.

Shaping the Waves: A Conversation with James Jean who contributed and inspired a lot of the look and visuals of the film. I found it simply fascinating just looking at his artwork and I do wish they would have included a gallery of his work on the film as some of it is simply wondrous to look at.

Finally, we have Guillermo del Toro's Master Class. Now if you are an aspiring film maker then you will want to watch this. This is almost del Toro taking his own time to explain how a film or a scene is created from every aspect. You can tell from this and much of the documentaries and interviews that he literally has his thumbprint on every single frame of this film and that it is all coming from him. The term 'Visionary Director' is thrown around a lot in film, but when it is applied to him you can see why and no one will ever deny that even from just a look point of view, his films are beautiful. It is a shame that he does not contribute a Commentary as I feel that he would be someone who it would be fascinating to listen to just talk about the filmmaking.

The Shape of Water is a classic example of style over substance. The film could easily be broken up and shown to me to see how great editing, set design, costume and music work their way together, but that is not what a film is. I was so disappointed in this film that I will probably never watch it again.