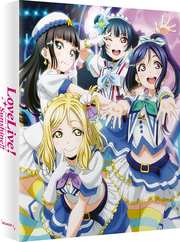 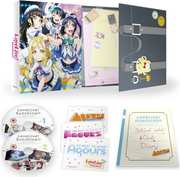 I guess the clue was there in the premise, high schools forming idol groups, pop singers to compete against each other in national competition. While the original Love Live! School Idol Project series was about the girls of Otonokizaka High School in Tokyo coming together to compete and in the process save their school, the option was always there for the show to franchise out like CSI, setting up Love Live anime in different high schools with different characters. You could conceivably have had a Love Live anime for every major Japanese city, running concurrently, and then having one big cross-over episode at the end where the groups competed against each other, fans voting for their favourites to win. As it is, we’ve only had the one spin-off to date, this Love Live Sunshine series. Despite my facetious fantasy about a franchise, it isn’t a show that really demands a spin-off. There’s only so many ways you can tell the same story, about high school girls coming together to form a pop group. But there is one, very visual reason that practically demands another shot at Love Live. 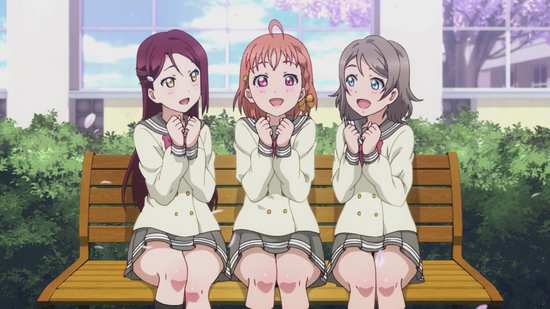 The first series and movie were released by NISA in the US, and MVM released the series in the UK (the movie hasn’t had a UK release at this time), but with NISA pulling back from the anime distribution business, it was Funimation that licensed the spin-off series, Love Live Sunshine, and it’s All the Anime who bring the first season in Collector’s Edition Blu-ray (limited to 500 copies) and standard DVD to the UK.

Chika Takami’s high school life was pleasantly aimless, until the day she saw the school idol group μ’s on a big screen billboard. From that moment on, Chika was inspired to start a school idol group of her own, and winds up facing some of the same problems; such as getting permission to form a school idol club in Uranohoshi High School, as well as recruiting a decent number of like minded girls into the group. But μ’s hit the big time in the big city of Tokyo before conquering the Love Live competition. Chika lives in a quiet seaside town. Does she even have a chance of getting started, let alone hitting the big time? 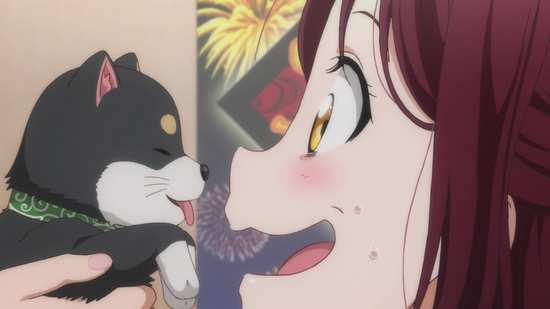 13 episodes of Love Live Sunshine are presented across 2 Blu-ray discs from All the Anime.

Love Live Sunshine gets a 1.78:1 widescreen 1080p transfer on these discs. The image is clear and sharp, and the animation pops with bright and vivid colours. The character designs are appealing and memorable, while the animation is smooth and energetic. Perky high school girls of various anime archetypes populate the cast, and the animation does all these characters justice. The big difference here is in the CGI. In earlier idol shows such as Super Sonico, and more appropriately the original Love Live, when it came to the heavily dance choreographed songs, the character animation would switch from 2D to cel-shaded 3D, and the CG versions would be concave-faced distortions of the 2D characters. It was a seriously freaky moment in each episode. In Love Live Sunshine, the 3D cel-shaded CGI characters look identical to their 2D counterparts. By Jove! I think they’ve cracked it. 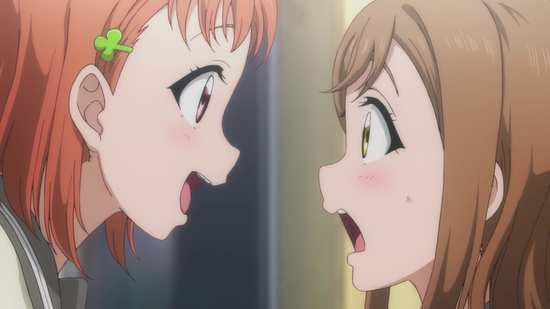 You have the choice between Dolby True HD 5.1 Surround English with signs, and 2.0 Stereo Japanese with subtitles, all locked during playback. Note that the English dub retains the Japanese songs. I gave it a quick try and failed to appreciate the high pitched squeakiness of the school girls. I preferred the Japanese audio, even if the character archetypes were all present and correct, with little or no nuance to help them stand out. The performances are lively and appealing though, and I actually preferred the songs in the sequel to those in the original Love Live.

Disc 1 autoplays with a trailer for Your Name.

Disc 2 autoplays with a trailer for Tsukiuta.

You’ll find Promo Videos on this disc, along with Commercials and the textless opening. There are further trailers for Fruits Basket, Shonen Hollywood, Starmyu and Handa-kun. 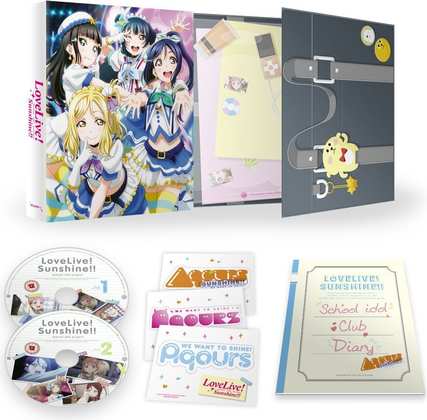 I don’t know about you, but when check discs for Love Live Sunshine showed up in my review pile, my first question was, just how will this show differ from the original Love Live? What is it bringing to the table that is new? Admittedly, given the high school, idol group premise, there’s a limit to how much the story can really differ. After all, it’s a show about high school girls forming a pop group and entering a song contest after being inspired by the girls from the original series, μ’s. Nevertheless, I was paying close attention as to just where it would differ from the original Love Live. By the end of episode five, when the revelation came that Uranohoshi High School would be closing down, and that the Aqours girls would have to sing their hearts out to have a chance to save it, I gave that exercise up, and accepted Love Live Sunshine for the near beat-for-beat remake that it is. 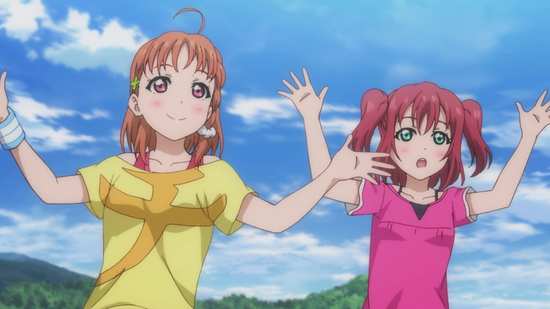 There are the occasional differences though, but these are differences of nuance rather than weight. The most obvious character from μ’s was Nico Yazawa, a total idol otaku whose presence threatened to overwhelm the other characters at times. In Aqours, it’s Yoshiko, a.k.a. Yohane, who is a total chunibyo with delusions of being a dark fallen angel. There is an interesting back-story for the third years in the group, and in the end the girls have to find their own reason for competing, an identity of their own rather than one inspired by their heroes. Of course there is the setting of the show, a quiet seaside town in a degree of decline rather than the bustling metropolis of Tokyo. But generally the story follows the same dips and rises as the original. 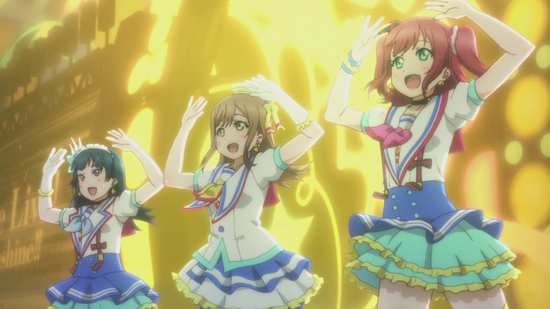 A second year named Chika is inspired to become a school idol, and starts a club at school, with her best friend You. Singing and dancing is all well and good, but they need songs as well, which is where transfer student Riko comes in, and just as Honoka had to work to recruit Maki, Chika has to convince Riko to write music for the group. They’re the second years, and they have a whole lot of problem getting permission from the student council president, Dia to start a school idol club. Even when they get some first year recruits, the ditzy Hanamaru, the shy Ruby, and the aforementioned Yoshiko to join, it’s the school chairman (and third year student) Mari who supports them as they get their first songs and videos out, start working their way up the school idol ladder. 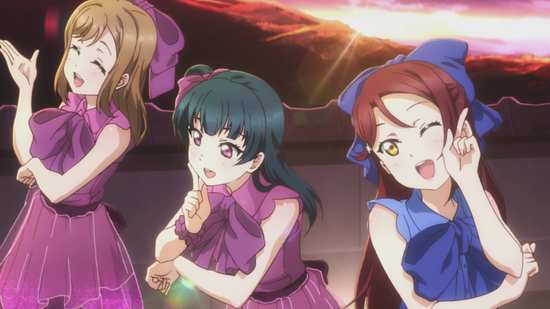 Towards the end of the series run, they get their final members, the third year girls, Dia, Mari and the level-headed Kanan, and we get a sub-plot that is quite interesting as to why Dia was so opposed to the idea of school idols to begin with. The characters are likeable enough, and this is an enjoyable show, but it’s worth noting that I had memorised the names of the μ’s girls by the end of the series, but for the purpose of this review, I had to make reference to the cast list, as I found that the Aqours girls were not quite as memorable or striking. Then again, when it comes to remakes, people tend to maintain a fondness for the version that they saw first, and for me, that is the original Love Live. 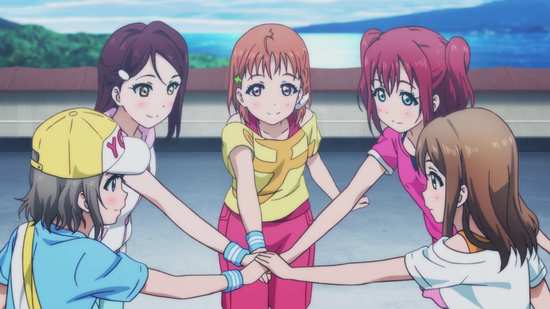 I do like the songs in Love Live Sunshine a bit more than the original, and having CGI characters that are identical to their 2D counterparts makes a whole lot of difference to the viewing experience (maybe even enough to justify the remake), but having a story, character dynamics and development that are so similar to the original makes Love Live Sunshine feel like a pale reflection for me. That’s until the final episode in this collection which just hits it out of the park, getting it spot on with the emotional beats. It’s a pitch perfect episode that manages to set Love Live Sunshine apart from the original. It may be too little, too late when it comes to its placement in the series, but it does mean that in the end, I enjoyed Love Live Sunshine just as much as the original Love Live.